I've seen a few videos of people doing ladder test. Where they shoot 1 round at various grains in order from low to high, record the speed, then chart it out and can pick a good starting point. Is that a reliable way of getting your powder charge nailed down? I have a 270 that has been giving me some fits, and looking for a different approach

I prefer doing 2-3 shots per charge if you’re going to use this method. I personally like to shoot a modified version of an OCW test. I shoot 2 shots per charge weight from left to right on the target. I’ll attach a picture as an example.

Depending on the case capacity I load in .2-.5gr increments for 12 loads, a total of 24 shots. For a .270 I would load in .3 gr increments. That would give you a spread of 3.3gr of powder. I look at multiple reloading sources and get an average for the max charge. Then I’ll add 1.0gr to the average max and work up to that. For example if the average max is 50gr then I’ll make my max 51.0gr. I will start 3.3gr below that in this example and work up form 47.7 to 51.0 grains. I stop when I see pressure like hard bolt lift or shiny ejector marks.

I shoot 2 shots to conserve components and speed up the process. If two shots touch or they’re close, that’s a good sign. If two shots are far apart than 1-3 more shots isn’t going to make the group smaller. I do this test to mainly look for consecutive charge weights with points of impact that are similar. I will also do a velocity test like you’re talking about either on the same day or my next trip to the range. If I’m doing it the same day, I’ll load the same charges up for the velocity test but only one shot each. This saves components and will give me a general idea if the flat spots in velocity line up with the flat spots on the target. If you do the test on a different day, then you can narrow down the best charge weights from the paper test and load 2-3 shots for each charge when you chronograph them.

After I find a good node on target that lines up with a flat spot in velocity, then I do seating depth testing. You can also do the seating depth test first before anything else and just use the starting load, either way works. I start at .010 off the lands in my powder testing and that’s where I start with my seating depth test. I work back in .005 steps but you can do .003 if you want. Again, I shoot two shots per seating depth and shoot them left to right the same as the powder test. I look for the same thing on target, I want multiple seating depths to have similar points of impact but shoot good groups. Ignore the group that’s one hole with a big group on either side of it. You want to see ideally 3+ groups in a row that hit in the same spot and are nice sized groups. If I don’t find a good seating depth within 12 loads from .010 to .065 off the lands, then something is wrong. Either change bullets or evaluate the rifle.

The attached photo is a powder test I did on my .284 recently. The groups are wide because my seating depth was off when I did the powder charge test. You can still get an idea of the test looking at this though. 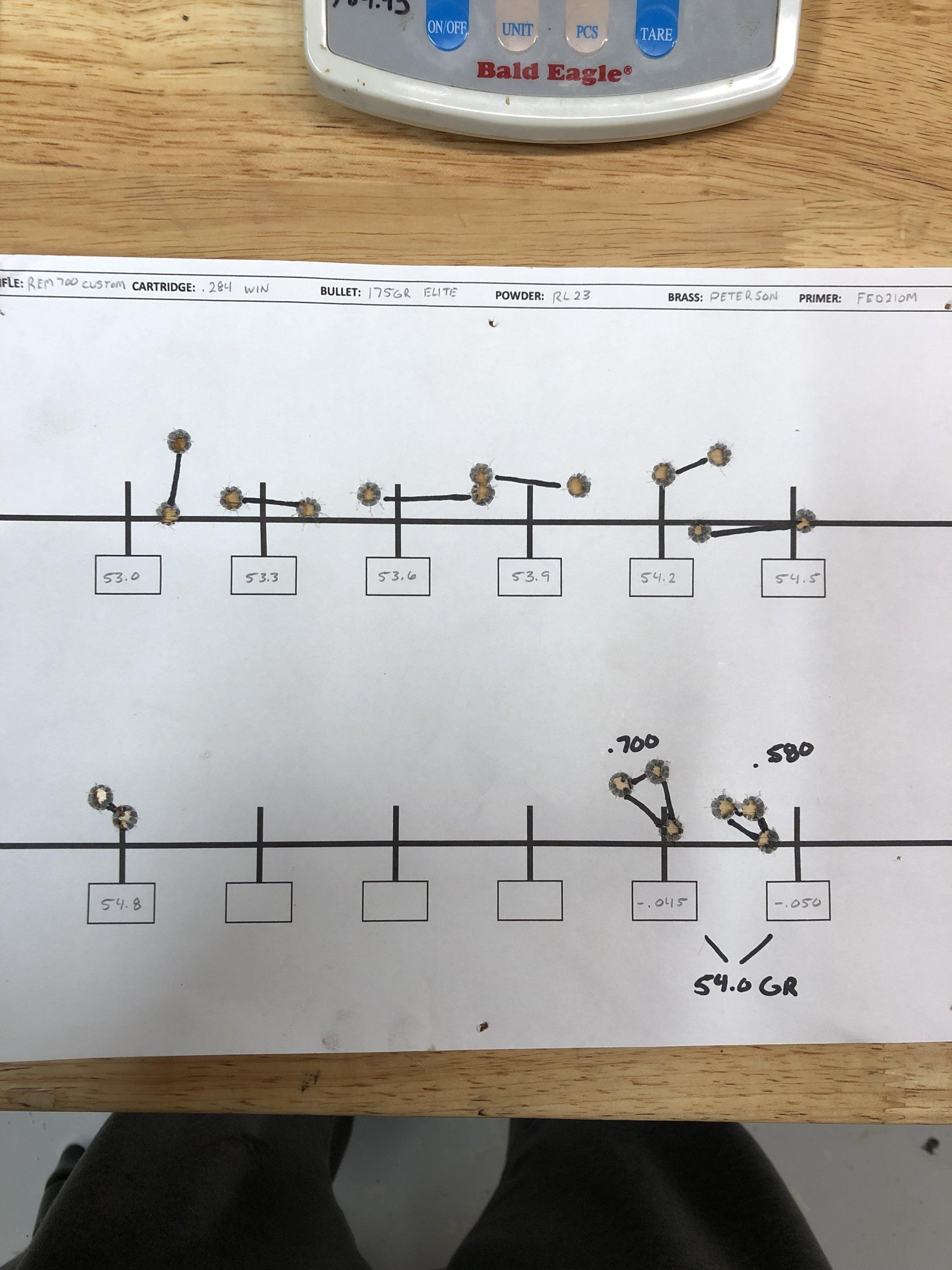 Agree with jud but i first do a pressure ladder test. 0.5 grain increments until i reach ejector marks [first sign of pressure]. Then you know your safe range.

For 270 and say 130gr bullets with 4831 i would start at 56 and go up in half grain increments and most likely you'll reach pressure just north of 60 grains. Then you know for sure what your safe range is.