Is this common? SMK

papa45 said:
I admit I don't have any experience with the SMK and I'll probably get all kinds of grief from others on this forum for saying this. I am constantly amazed by folks who talk about using the SMK for hunting because it shoots tight groups at the range. The SMK is a target bullet, not a hunting bullet! No hate mail, please.

There are lots of other good choices, as already noted. Ballistic Tip - good for more rapid expansion in soft tissue at longer ranges, not good for close range or quartering-away shots or penetration, not my first choice. TSX - good for penetration and exit holes. Accubond or Partition - good all-around performance. Lots of folks like the SST; I have not had good luck with it. For shots out to 300 yards or so, I'd go with a 165 gr bullet. If you really think you'll be shooting at 400 yards, a heavier bullet might be better.
Click to expand... 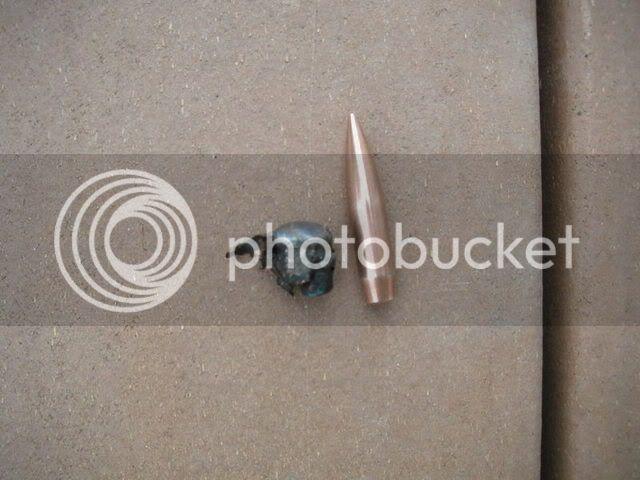 The entire thread is here


There is also a thread in the Long Range hunting section of a Sambar taken with the same bullets and the results were quite impressive to say the least.

I believe that everyone on this site is telling you there experiences
with the SMK and other bullets so I will give you some of my exper-
iences with them.

First; I have never used a 300gr 338 SMK but have used almost every
other SMK for targets and hunting and with almost 50 years of reloading
there have been lots of game fall to all types of bullets and this is the
conclusion I came to based on overall bullet performance.

As a target bullet the SMK's are second to none!!

As a hunting bullet they were very unpredictable( they would make a perfict
wound channel one time and the next time they would pass through with little
or no exit wound , then some times they would grenade and leave many small
exit wounds if any).

This is the main reason Sierra recomends that the SMK not be used for hunting.

Any bullet maker would be proud and very succesfull to have one bullet that would
do everthing.(THE Magic Bullet).

I will be the first to admit that the SMK killed everthing shot with them but the
bullets performance varied from shot to shot.

So if you choose a bullet designed for a specific use you will find that performance
will be more consistant.

Some examples of this ; Dangerous Game=Heavy jackets some times even solid for
Maximum penetration.

Then there are the faster expanding bullets designed for thin skinned game like the
deer where you want faster expansion so you will have a larger exit wound (Ballistic
tip,Amax,etc)

And finally there are the varmint bullets =thin jacket for explosive hits (Not recomended
for big game).

So I recomend you pick a bullet designed for your type of game and work to make it
accurate and use it to its accuracy limits and if the distance requires a 300 SMK then
use it but be prepaired to have mixed results.

Using any SMK for hunting would be my last choice and only if the rifle would not shoot
anything else, But for targets they would be my first choice .

This is just my opinion based on my experience. Others will disagree so you will have to
choose the right one for you.

I've used 190 gr Smkhp's in a .300 H&H and a .30 x .378 Wby. On deer they are very effective, but as JE said, are somewhat unpredictable. My theory was that a 190 gr anything would kill a whitetail efficiently. The farthest any deer travelled after being hit with the 190 was 20 feet. All were broadside lung shots, but I believe the 190 would shoot completely through a whitetail lengthwise where your 168 didn't. That is just opinion though, since I haven't done it or seen it.

I used a 225 gr Barnes X in .338 x .378 on a blackbuck that had a bullet diameter exit wound from a front quartering shot and left no blood trail. The petals apparently sheared off. The blackbuck was running when I shot him and he made about 60 more yds before he went down. I never hunted with this bullet again. In my opinion, a big matchking would have crushed him where a well known hunting bullet didn't. Again, just my opinion.

In fairness, I have seen and heard so much good about the Accubond bullet that I am working up a load with the 200 gr Ab for the .30 x .378. I think the 190 gr bullet is just a little light for the .30 by, and it didn't like the 220 gr matchkings. The Accubond may not outshoot or out-hit the matchkings, but it's expansion should be more consistent.

The 300 SMK hits with such authority that it has to be seen to be believed..

Strokerace_dave said:
Thanks Boss Hoss for the informative info, maybe I will keep shooting the SMK and try it out on a bunch of hogs and a few more deer, I was shocked with the performance of my bullet given the speed and closeness of the shot. How do you like the 155 SMK, I think it is the Palma right? I really am planning to end up shooting the 190grainers eventually. But I really like the confidence in my rifle for the accuracy the 150 gives me.

But thank you guys for all the feedback and answers!
Click to expand...

I have used the 155 in my 300WSM and before that in my 06 since it came out. Have shot feral hogs, many coyotes, feral dogs and a couple of deer with it. That being said the 155 with having a thinner jacket as well as the SMK utilize a softer core and thinner jackets depending on the specific bullet would IMHO best be limited to the smaller animals such as deer and hogs on down.

Many people think they know the answers on the SMK and why Sierra does not advise to us it for hunting period. The company line on this subject is in fact set in stone and is partly a monetary decision.

jwp475 said:
The 300 SMK hits with such authority that it has to be seen to be believed..
Click to expand...

Thanks guys for all the info, and thanks for not bashing me for the use of the SMK for hunting. I am going to try a lot of different bullets and weights to find that "Majic" bullet which does it all. So we'll see, but for comparison im my findings the SMK kinda resembles a balistic tip, at least of the ones I have recovered. they all seem to come apart and the base of the bullet just drives through as far as it can. So I probably will go with a bonded bullet.

Also just for info, I emailed Walt Berger and his recomended bullet choice was a 155 Berger VLD, is that very close in comparison to a 150 or 155 SMK?
C

Between pulling the trigger myself and spotting for others I have seen several hundred deer shot with SMK's. Most were with the 168, 175, 190, and 220gr 30cals out of 308's, 300WM's, 300RUM, and a 300
Tomahawk. They work, and most of the time very well, however they can be very unpredictable. Sometimes they yaw very early and fragment violently. Sometimes they will penetrate several inches before upsetting (the vast majority do this in my experience). And sometimes they will penetrate very deeply before they yaw and may or may not expand/fragment.

To give you an idea, here's a visual of what I'm talking about- 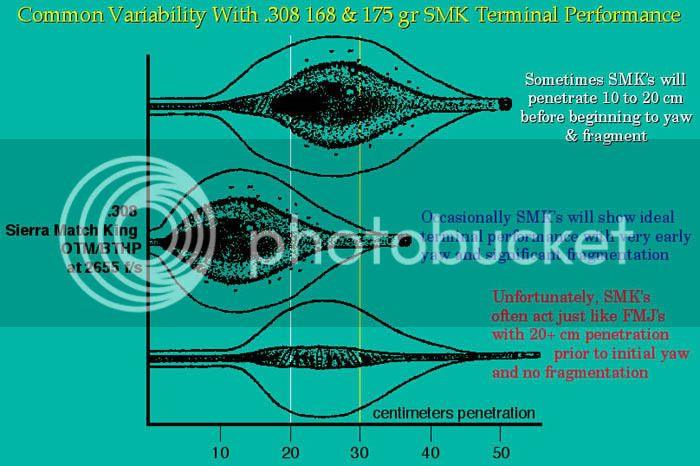 The variability between the exact same bullets comes from the tip, or the hollow-point. In the same box of SMK's the opening in the tip has varied from large, to medium, to being almost completely closed due to slivers of copper plugging the hole. This is where the unpredictability comes from. 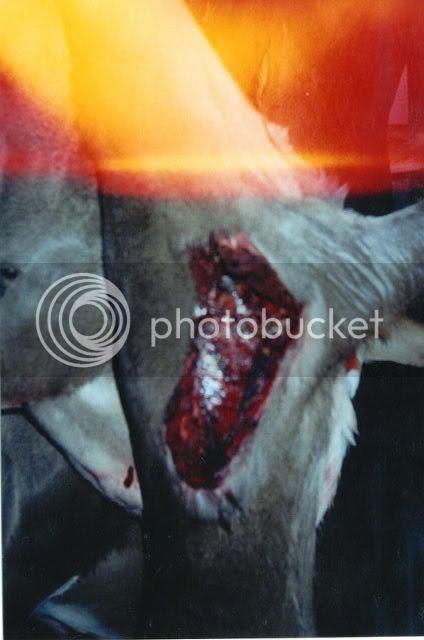 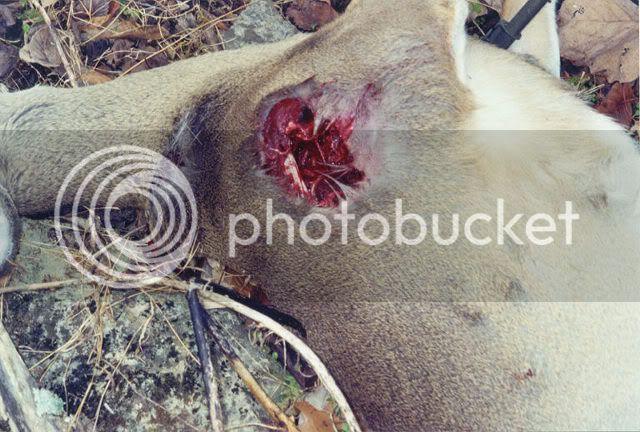 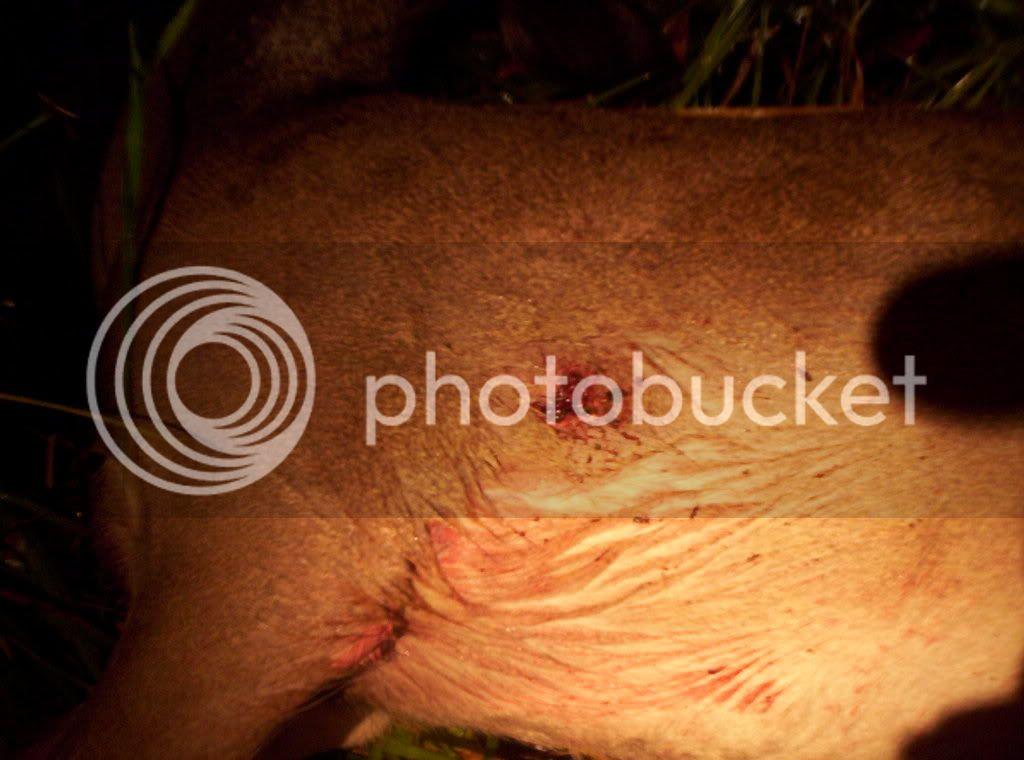 Having said that, the only deer that ran was the last and it went about 25 yards I believe.


If it wasn't for AMAX's, SMK's would still be my main bullet for deer, and I would have no qualms about using them again (still use the 220gr in the Tomahawk) however AMAX's and Berger's perform much more consistently in tissue.
Y

charles a, what has been your experience with the bergers reaching the target where some brush is involved as compared to the smk?

ive also been using smks for many years in my 30x378. i also have been using pre amax 162 bthp match hornadys in my 7x300wby for many years. neither is considered to be a hunting bullet. a dead deer is a dead deer, so im not about to change. im not into doing post mortums to see how the bullet performed. dead is good enough for me.

Exactly---how dead does something need to be..

Will be using the 250 SMK in my 338 Slowpoke in 3 weeks in New Mexico hopefully killing a 350 class elk on the Apache Reservation..
Y

well good luck on the elk. most importantly enjoy yourself in case the elk dosent work out for you.

Thanks---will post some pics when I get back...
C

yobuck said:
charles a, what has been your experience with the bergers reaching the target where some brush is involved as compared to the smk?
Click to expand...

K
i this help the common LRF measure better