Is it just to early yet or are there NO 12ga turkey shells available FS anywhere?

Orange Dust said:
Try Macks PW in Stuttgart AR if all else fails. Call them, don't believe what they have online.
Click to expand...

Placed an order with Macks PW for Apex yesterday, got email confirmation of order - but not shipping - Should I be concerned?
O

Clark54 said:
Placed an order with Macks PW for Apex yesterday, got email confirmation of order - but not shipping - Should I be concerned?
Click to expand...

They are good folks. Went to HS with the Boss. I can vouch for them if you called and made sure they were actually in stock.
J

Try midwayusa.com They have a bunch!

I was “thinking ahead” a couple weeks ago and went looking at local Sportsman’s (Boise). There was 1 box of 12 ga turkey on the shelves, 3 boxes of coyote and 1 box of goose.
I carried that box of turkey around the store 3 times before finally putting it back. I have 7 ea turkey shells at home and was hoping that someone that TRULY NEEDED it would find and buy them.
S

I did a bunch of patterning two years ago, to see what the gun liked. If it wasn't for that, I probably wouldn't have any.
C

Clark54 said:
Placed an order with Macks PW for Apex yesterday, got email confirmation of order - but not shipping - Should I be concerned?
Click to expand...

Shells came in! Now if I could just learn to call!!
O

Clark54 said:
Shells came in! Now if I could just learn to call!!
Click to expand...

All you need to know: Less is More.

I picked up some two weeks ago at my LGS. Nothing good in lead-free, but plenty of choices in lead.

DartonJager said:
Learned during and after Love-to whip-out-my-willy-billy-clinton was in office you can NEVER have to much ammo especially ammo you can not reload, so even though I have plenty of my favorite turkey loads on hand, been looking to stock up some more and have been looking for at least 10-12 weeks now both on line and OTC at my LGS's and FINALLY found some in stock on line at one store have never heard of and bought some. Bore a few hours ago I couldn't find any 12ga standard lead turkey shells FS anywhere. Plenty of $10 a round Tungsten turkey shells but no regular $23-$24 for a box of ten 12ga turkey shells. So is it just to early for them to be out or are they also going to be unavailable except in VERY limited sells out instantly quantities?
Click to expand...

There are several boxes for sale at my local gun store but you better zoom in and check the price they are expensive!Surematch firearms in Savannah Tennessee 731-926-3272 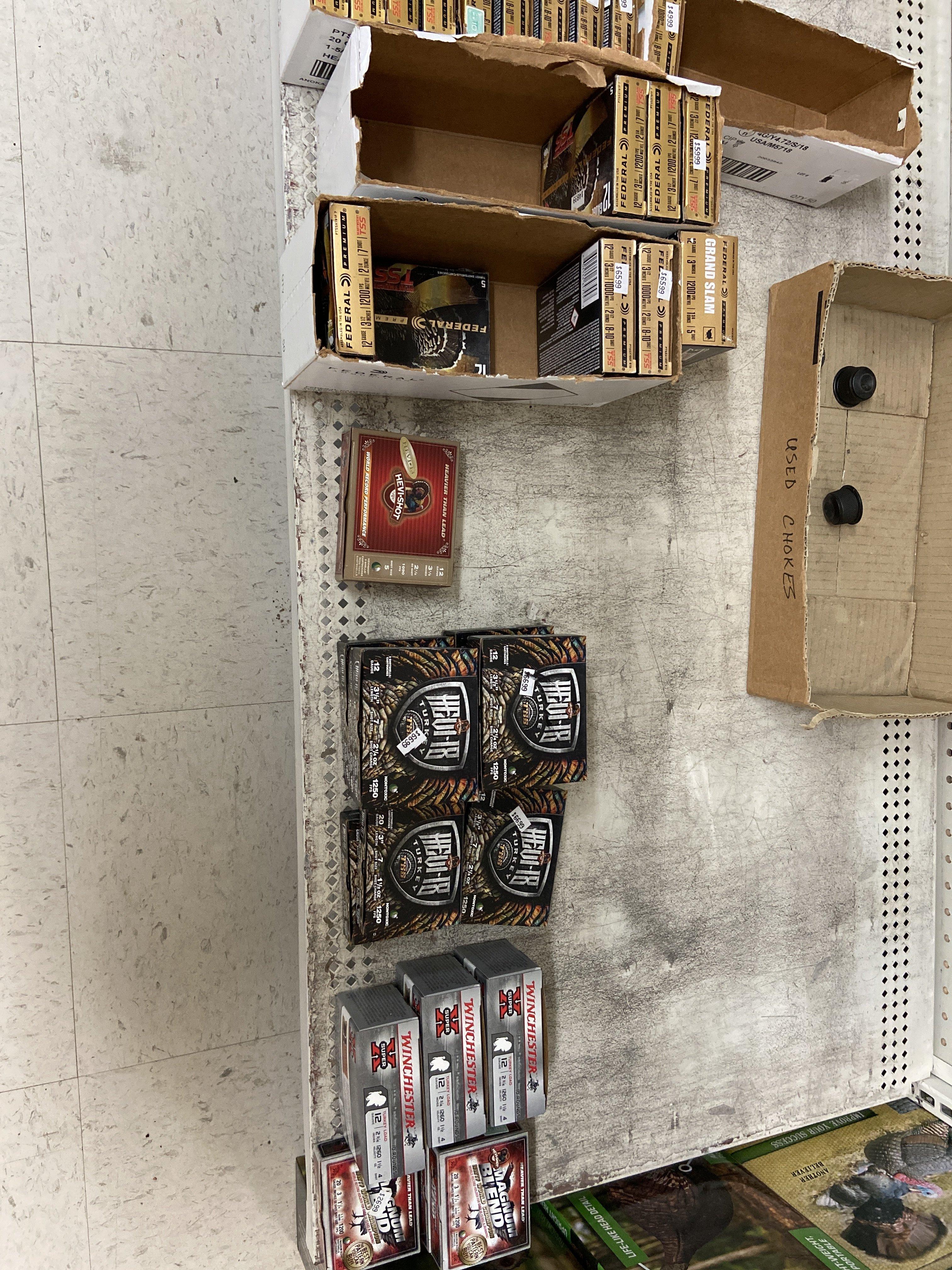 I've been shooting Turkeys for years with my 12ga 870 and 16ga Hunter Fulton and I don't use anything special just #4 or #5 shoot. So you might look for regular shotgun shells.
D

jlynch34 said:
I've been shooting Turkeys for years with my 12ga 870 and 16ga Hunter Fulton and I don't use anything special just #4 or #5 shoot. So you might look for regular shotgun shells.
Click to expand...

Well was in my local Cabelas today
Absolutely no 12ga turkey shells except Federal and Browning TSS at about $8-$10 MORE per box of 5 vs last year.
Also did a decently through web search and found only two places with Winchester Long Beard XR Turkey shells in stock but at essentially 2x normal price at over $40 for a box of 10 vs normal $23
My one friend is so low he isn't going to check the sight in of his gun or do any practicing which I feel is a HUGE mistake as last year he missed more Toms hunting in two states than I have in my previous 35 turkey seasons combined we're taking missing Toms in the double digits.
He took noticeable offense when I suggested he had better get to an optometrist and get his eyes checked as he also missed more than a few Antelope at close ranges last year as well. We checked both his 12ga and 300wm T3 and both were hitting right we're you aimed.
I'm taking my boys shooting tomorrow and have 50 rounds of upland game loads I'm going to have us burn through as we lucked out and got access to some pretty good turkey land.
Last year I called in 7 Toms in two days to my one son and he never got a shot due to a multitude of reasons and mistakes some his, mine and nobodies fault.
My other son I called in two toms in two days and he missed one and couldn't swing around to make the shot on the other.
My one friends son lives in WI and has access to land literally crawling with turkeys and he called in Toms to his dad every day he was there for almost a week and he missed every one he shot at.
Sadly he still hasn't gone to see an optometrist