Hello all.
I haven't posted much here but I have been hunting so I will let you know how I am getting on

Opened my account.
I had the pleasure of having a mate of mine down for a shot this weekend. We went out for a shot on Saturday morning. It was a new permission that I got only a couple of weeks ago. I had a chance to walk it during the week and it was full of tracks.
It is a farm that has a small river as the far boundary and a few acres of marshy ground on bothe sides. Then on the right side as we walk down the farm there is a huge amount of rough ground and forestry. Ideal for dear.

First thing in the morning. We reached the far side of the forestry from the farm and were greated by a dark over cast and drizzly morning. But undetered we got out and scanned the tree line. We were not 5 min there when I spotted a single sika stag. It was about 265 yards away and compleatly unaware of us. Thanks to my mates excellent lica geovide ranging bino's I could range it and see clearly that it was a stag. Even in very low light.
Now the big test was for my new 6-24x56 hawke sidewinder scope. Could it pick up the dark shape in the early morning light. I clicked it up from my 200y zero to 265 and got behind it to see for the first time how they performed.
I put the red eliminated reticule over the stags shoulder and for the first time I could use it for its proper purpose.
Steady and confident in the 150g SST I flicked off the safety, took up the pressure and CRACK...... Thump.. grin. The shot was good and the majestic sika was down. I could see the stag kicking out on the ground exactly where I shot him.
We had one in the bag and I was hoping to have a shot for my buddy after he had traveled down to visit.
Nothing for it except on to the next stop. We headed over to the other side of the farm. We parked into the farm yard and made our selves ready to go. My mate made sure he had his 7mm 08 loaded and ready to go.
Not long after we headed down the farm. We kept our selves low and we moved slowly down the farm track with a ditch and trees at either side of us we had good cover.
We stopped every now and then to glass the far tree line expecting to see an animal grazing close to the trees. Then from my left I spotted some movement. It was a stag trotting across from the rough ground. It was moving with a purpose but it hadn't seen us but we needed to get redy for a shot as he was not hanging around. My mate got himself ready against a post and acquired the stag in his scope. I stayed off to his left and watched the deer in my scope.
It stopped and then trotted then stopped and trotted again never staying still for long enough for a shot. Then he walked up to the ditch line that was quiet high. This was it. He stopped long enough for shot, but my mate didn't have a shot. It was no or never. I asked him if it was ok for me to tak a shot as I had a good line of sight.
The reply was quick and I was not going to wait for the deer to jump the ditch. So with his permission I released another 150g SST. The shot was good and hit the stag between the shoulder blades below the neck. As he was at this point climbing the ditch.
Nice. We had 2 fine deer and I had started my season with a bang. 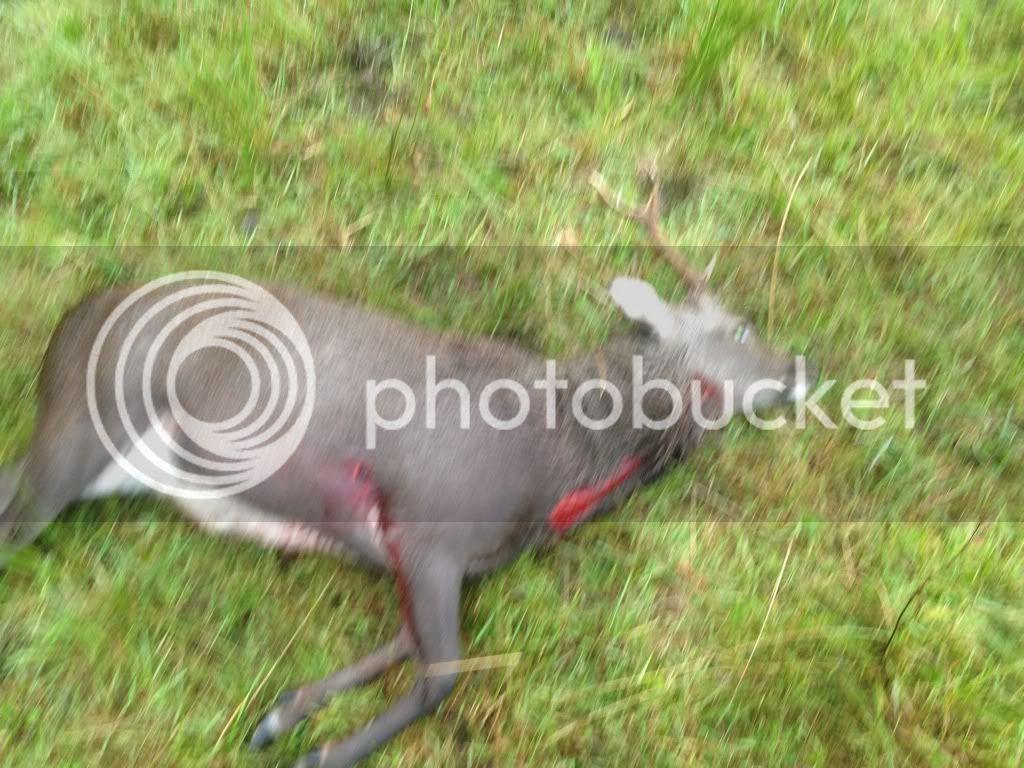 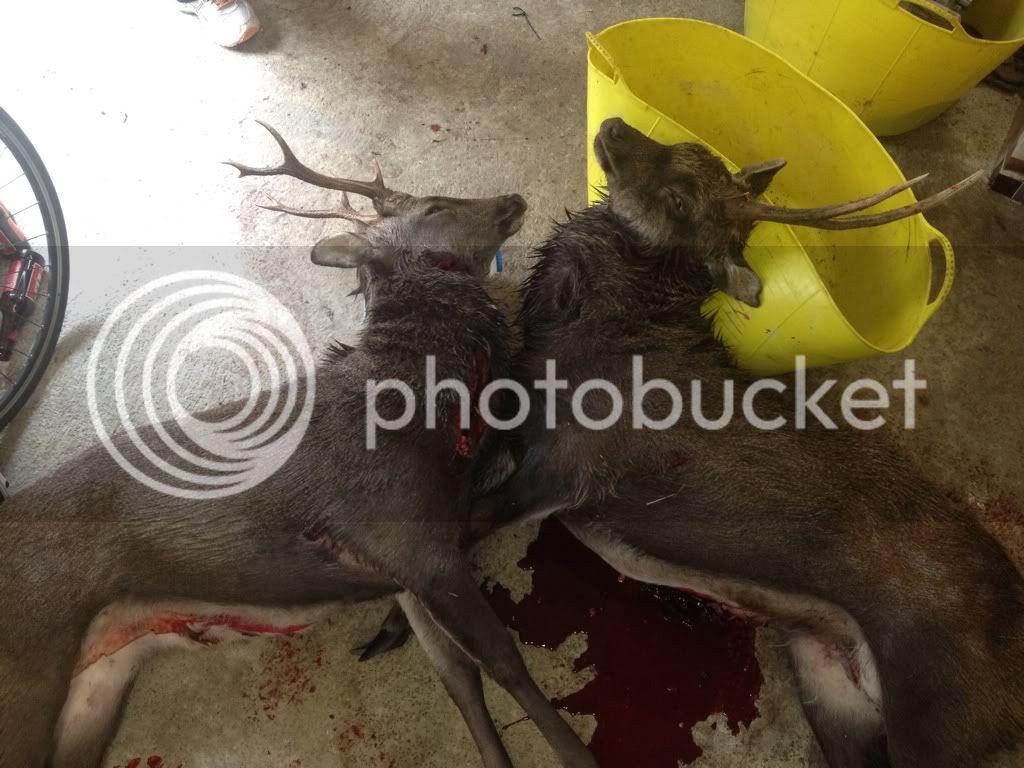 Unfortunately. I had to work later that night so I brought my mate to one of my permissions that I know has deer coming in on it. I introduced him to tha farmer who was happy to have him in as he is having problems with deer at the moment. We walked the ground and discussed where would be the best place to wait for a deer.
So later while I was at work I got a txt from my mate. " I just shot a nice stag" I was delighted and so was the farmer. 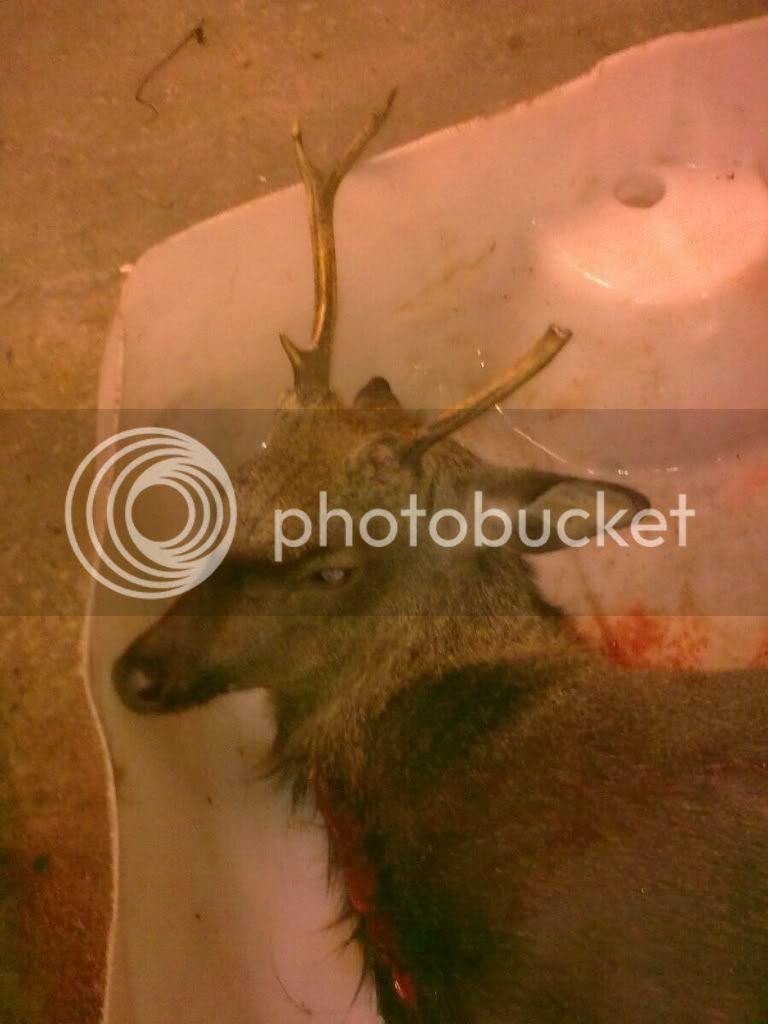 Sweet hunting trip. Wish we had the deer you guys seem to have. So what's your set up and caliber? How did the sidewinder work in low light.

Tank
You must log in or register to reply here.