High Shoulder Hits, be ready to finish the job....

It is for this reason I try and avoid the high shoulder shot if possible. There have been times when it was needed such as when a ram is just below the cliffy stuff where when lunged they have enough oomph to get up on a ledge out of safe reach. Then its a shoulder or high shoulder dump 'n' roll. Unfourtunatly they have to be finished off but it beats loosing them all together.

Thanks for the honesty. This is what I like about this site (mostly). You get to see the stuff here that they dont show you on TV.

When I walked up to the buck and grabbed onto his horns the only thing on my mind was that it was getting late and I needed to get to work to get the buck dressed and down to the creek. I grabbed his rack and started pulling the buck down the hill to a better place to dress him out. I will admit that at first I thought the buck was just hung up on something when he got hard to pull , that is until he lifted his head up.

I was very suprised to say the least. I can not say I was ever scared in any way. I used to work at a Vet clinic dealing with big dogs every day, many of which were not overly happy to be handled. Similiar situation. No need to panic or get scared but it is time to focus and think.

My first reaction was to grab for my handgun which is generally in my pack but it was not there this time. I was more worried that the buck would run off the state ground I was on and onto private ground that I could not hunt so I simply backed away and once I realized the buck was not really able to cover much ground and that he laid back down with me only 20 yards away, I knew I could easily finish this fight. Again, I would not say I was scared in anyway, just suprised. Had he come after me, that certainly may have been a different story but again, I have had 100 lb german shepards and 150 lb Rotts come after me in the clinic and once you know how to deal with them its not really all that bad. A +300 lb mule deer buck however certainly could have done alot of damage but luckily he went away from me.

To be honest, the most nerve racking part of it was when I was by myself, elbow deep into the buck dressing him out and I looked around and realized it was so dark I could not even hardly tell what was bushes around me from their shadows. All summer there had been three grizzlies in this area and that was the first thing that came to my mind sitting there in near total dark, bloody and pretty much blind.......

Here are the promised pictures. 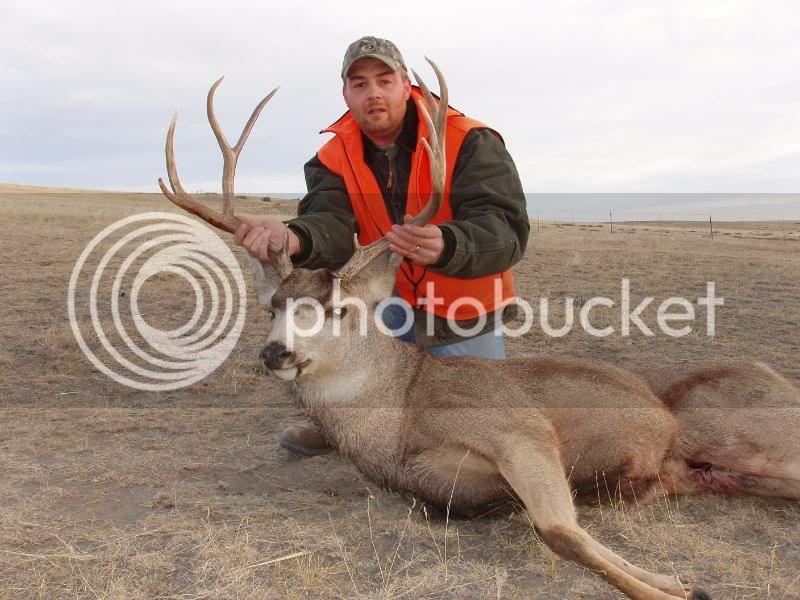 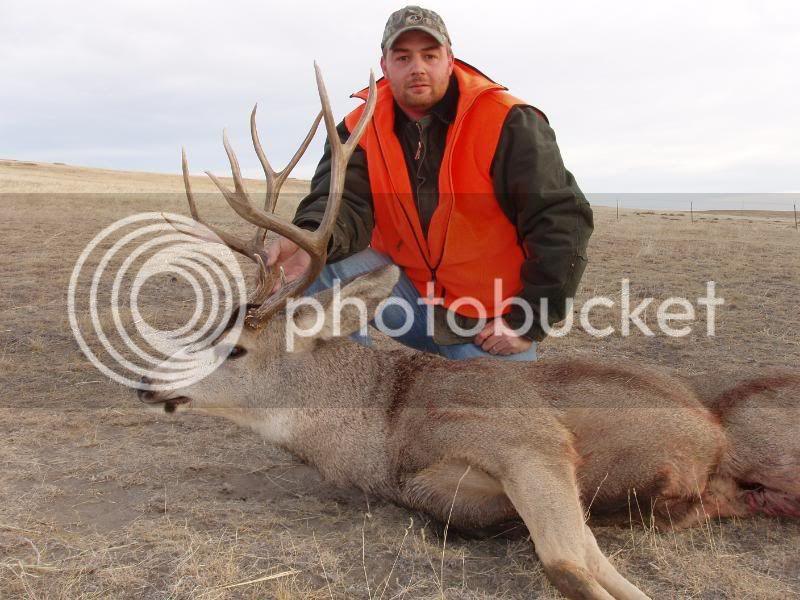 Pretty tall but very short main beams. Had he had good main beams this would have easily been a upper 160 to lower 170" buck just from his frame size. Only a 4 year old buck so he had not yet started to put on the mass but still my best mule deer to date. I have spent so much time taking good whitetails that I have let alot of mule deer pass.
K

Enjoyed reading about your “close encounter” and glad it ended up on a good note. I think everyone who has hunted deer and elk for a long time has had a similar incident once if more than once they would need to rethink the process in which they approach down game.

I have Coues deer in my part of the country, and I've seen 3 high shoulder shot deer. 1 was dead and the other 2 had to be finished off. 2 were shot with a 300 RUM and the other with a 270 Wby Mag. Its nice that they stay put but it sucks that the job isn't done.

Kind of have mixed feelings about it.

Ya, he was right in that range of spread, just as tall as he was wide. Good buck, nothing special. With the year we had we spent more time chasing off trespassers and catching poachers then actually hunting. It was a strange year.

Talking to many others it was this way all over, not sure why, maybe the nice weather and everyone was out, not sure why but it was a bad year.

Did not see a mature whitetail on the property this year and as you know, those are my preferred targets!!!

If it stays like this we will just have to take a couple weeks and head out for some big mulies!!
F

Congrats Kirby on a nice buck and great write-up!

I'm really glad he didn't have any more "juice" after your excellent shot (it's hard to really know sometimes...) - it would have been a very different story. While those antlers may not be proper "trophy-sized" in measurement, they look big enough to make some proper holes in YOU!
T

Good write up Kirby,
Some deer are just plain tough and hard to kill.

A mate of mine shot a Sambar stag through the shoulder once, walked up to it and took some photo's and then walked out to get the truck. When he got back it was gone. Never to be seen again.

Another time I shot a Red Stag at close range with a .30-06. I walked up to it and took some photo's then pulled out my knife and started to cape out the head skin.
When the knife went it half an inch, the stag woke up and stood up. Problem was I was standing between its antlers when it stood up.

The thing threw me about like a rag doll on top of its head. I had to hang on and hope for the best. Eventually I managed to stick my knife where it would do the most good and the thing died.

Gave me something to think about.
B

Topshot said:
Good write up Kirby,
Some deer are just plain tough and hard to kill.

A mate of mine shot a Sambar stag through the shoulder once, walked up to it and took some photo's and then walked out to get the truck. When he got back it was gone. Never to be seen again.

Another time I shot a Red Stag at close range with a .30-06. I walked up to it and took some photo's then pulled out my knife and started to cape out the head skin.
When the knife went it half an inch, the stag woke up and stood up. Problem was I was standing between its antlers when it stood up.

The thing threw me about like a rag doll on top of its head. I had to hang on and hope for the best. Eventually I managed to stick my knife where it would do the most good and the thing died.

Gave me something to think about.
Click to expand...

I had almost that exact setup last year with the opposite result. Made the exact shot you describe but with a muzzleloader from 90 yards, but the doe dropped dead as a doornail with only two modest holes through the lungs (don't use bonded Shockwaves on deer, I learned, they don't open) and didn't touch the spine. Yet apparently close enough to the CNS to permanently short-circuit her.

Like you I aim for the center to give me the most room for error but occasionally hit high. All I can think is that a high lung hit is less likely to fully deflate the lungs (I've had worse luck with them), and obviously with the holes at the very top the blood is going to stay inside and not bleed externally as well. Glad you were able/dedicated enough to get him and not let the 'yotes get him.

It is unfortunate to hear about the poachers/trespassers this year. I hunted MT this year and it just wasn't that hard to get a public land/BLM map and do it the right way. In fact when a local landowner pulled up (probably saw our out-of-state plates) and saw us pouring over our maps trying to find any more legal land that might hold an antelope herd (they were all on private eating the winter wheat), his suspicion turned to assistance and he gave us permission on 2000+ acres and we both tagged out within hours.
S

Fiftydriver,
I'm a flatlander hunting in South Carolina. I can't believe that if a wounded animal crosses a boundry line that you can't retrieve your animal. That's a crazy law. Do the game wardens enforce that law or the land owners? Didn't mean to change the topic. Nice buck by the way!!

I know the other land owner and if things had required it I could have certainly went and talked to the landowner and he would let me retrieve the buck but I just did not want that added hassle.

There are some land owners around that would give you serious hell. If you can prove the deer was fatelly wounded on legal fround and crossed over to other private property, you can get a FWP escort to take you to get the animal but many times the land owner, if they want, can delay things long enough that your animal will not be any good when you get it or hit very hard by coyotes.

There are very few FWP officers available and Montana is a pretty decent size state!!!

IF the land owner refuses to let the FWP onto their property, then the FWP would have to get into legal action to make it happen. Luckily, I know most of the land owners around the property we hunt on and that would not be a problem. Best situation however, put the animal down on legal ground or let it go. I have let several really big whitetails and some mule deer much larger then the one I killed walk because they were right on a property line.
N

The bullet placement was just too high,shoot center shoulder and you wont have this problem again.Yheeee....I wouldnt be talkin about shootin a deer after dark regardless of it being wounded earlier,the F&G doesnt have much of a sense of humor when it comes to after dark "hunting".gun)
You must log in or register to reply here.
Share:
Reddit Pinterest Tumblr WhatsApp Email Link