IMO, the problem with either is that primer seating should not be seen about consistency in depth, but consistency in function.
The ONLY primer tool that provides this is an indicated K&M.
It's the only tool that measures pocket depth to uncrushed primer height for zeroing, and indicates the desired crush of fully seated. All other tools are based on pretty much nothing that could be considered a standard for primer function.
T

Mikecr said:
IMO, the problem with either is that primer seating should not be seen about consistency in depth, but consistency in function.
The ONLY primer tool that provides this is an indicated K&M.
It's the only tool that measures pocket depth to uncrushed primer height for zeroing, and indicates the desired crush of fully seated. All other tools are based on pretty much nothing that could be considered a standard for primer function.
Click to expand...

I use the K&M without the dial indicator, and the feel is excellent, but as good as it is I think the Sinclair is a little better. But on the otherhand the feel means little if you know exactly where your at in seating the primer. So I do agree with you about the K&M. But to add to this, I've also found that seating Federals seems to work better with the K&M than just about anyother seating device I've seen (I pretty use nothing but Federals and CCI's). I've owned the RCBS handtool, and it's a toy compaired to the other two.
gary

yet the vast majority of IBS shooters use a Sinclair (I don't). The idea is to be able to feel the primer crush as it's seated. My hands are so screwed up these days that I really can't feel the crush very much at all, and will agree with you that the indicator setup would work better for me.
gary

The vast majority of competition shooters embrace every shortcut in sight.
Just opposite of what the few true competitors do..

Smashing a primer into the seat by feel only brings the probability of reliable 'firing'.
But play with some or any of these factors and just watch what happens to a great load.
Well, that is if you're shooting anything other than a 6PPC or 30br at extreme pressures(the ultimate work-around).
F

I uniform my primer pockets with the EJS tool and use an RCBS bench mount priming tool that primes one case at a time. Excellent tactile feel and I handle every primer. Some will cringe at that but for all the years I've been reloading I've never had a cartridge fail to fire. You can see them on the left side of my bench in this photo. I have one set up for both large and small primers. 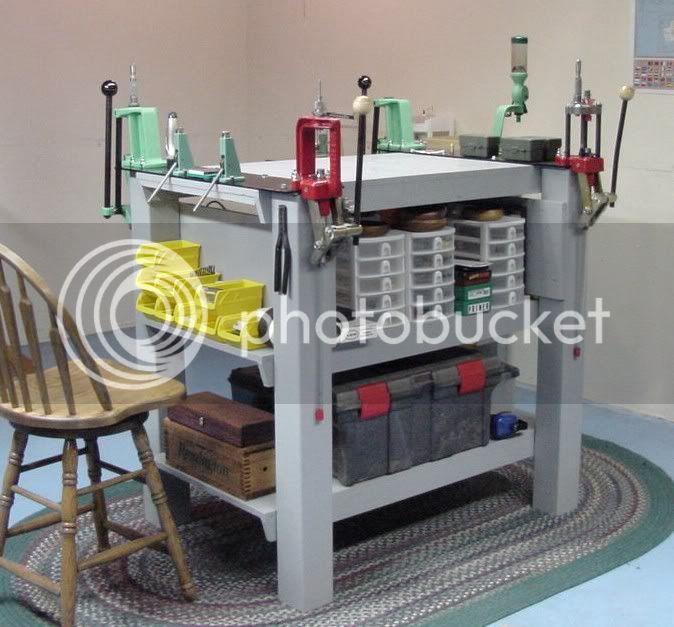 honestly, if you just have to have a bench mounted priming device, look no further than the Forster. Seats the primer .005" under the face everytime. But I still like the K&M better
gary
C

Im confused. Maybe you guys can enlighten me? I was under the impression that the most important aspect was to make sure that the primer was pressed in far enough so that the anvil is contacting the base of the primer pocket. Is this less important than varying primer depths?

It is crucial that the primer is contacting the pocket base. With this & no striker or headspace problems, the primer will ignite reliably.
But mere primer ignition can still leave degraded load performance, from higher ES to flat out flyers, and in ways too abstract to lay down as a rule really. This leads reloaders to 'trying' different primers & picking what seems best for a load(for some reason). Few dig in to figure out the whys, but some BR shooters have been left with no choice and have found issues with firing pin settings, or trigger drag, cocking piece misalignments, or spring issues, etc.

Of all the books I've read, I've never seen a study on primer ignition w/resp to speed, indentation depth/dia, or even overall energy. Having run into an issue with this once, I can say that both the magnitude/difficulty of the problem and the resolution shocked me. It could have happened to anyone and they might never have gained awareness of it.
There is a lot to learn here.

And we're not gonna learn it from PB BR shooters, as mere ignition even with fairly big variance won't affect N133 & +75Kpsi loads in tiny 6PPC cases -much at all. So they can get by with smashing primers flat enough.
Different story with more of slower powders and normal pressures. Truly, pretty much everything is different here.
So it will be LR shooters, probably hunters, who work it out.
C

Wow i was pretty oblivious to all the aspects of priming. Gonna have to pay more attention to what im doing. Would the offset of the flash hole and the angle at which you deburr it have just as great effect?
T

Ferris Pendel said more than once the secret to reloading was consistencey. Primer strike is exactly the same, primer pockets are identical in depth and bore. You have all that done as perfectly as you can, and then use three different lots of the same brand of primers. You just wasted a lot of time!

The primer crush (as some call it) is a black area with nothing down in concrete. How much crush? Or how little crush, and still work fine. There's just nothing definite about it. Nobody says it's wrong, but nobody has yet to prove it right (as per Pendel). It's just something you do. I personally cannot see any difference between a seated primer group and one that has a cocsistent crush. Both still show single digit ES figures. Lately I've taken to seating my primers till I can just feel them bottom out. Zero difference. Pendel said that consistent ignition is more important than anything, and it starts with a consistent primer strike. (harder than you think). This is governed by several factors just as important as where you seated the primer, and also how. The sized headspace is critcal; yet often ignored as they case fits the chamber rather nicely allowing the bolt to close very easilly. If the case moves in the chamber from the primer strike, then all that work you did with the primer pockets and precision seating of the primer is now null & void. A case that's had the shoulder pushed back .003" to .004" will often make your eyes bigger than silver dollars when compaired to an fired and unsized case. That's movement in the chamber by the way. But say that the case isn't moving in the chamber (it is). You squeeze the trigger and the firing pin starts to travel forward towards the primer face, and hits it. If it bounces; you have a problem. If it's not centered, it will cause you grief.

In theory a rimmed case or a case with a belt that has about a half thousandths crush in battery will be the best option. But as far as I know, no one has seriously explored that area to prove or disprove this. When a case is fired it tries to move towards the rear, and this creates recoil. Sixty thousand pounds of pressure is sixty thousand pounds in any sized case and chamber length (this is one of the laws of pneumatics). But the area of the case head changes this. The more area, the more felt recoil in rifles of the same weight. Of course there is also the factor of the moving weight of the projectile as it meets resistence in the throat to be added in. But if the bullets were the same weight and the rifles the same weight the recoil felt would be governed by the square inches of area of the case head. There is a lot more to this that the few sentences I posted, but pressure is pressure no matter where it's at.
gary
You must log in or register to reply here.
Share:
Reddit Pinterest Tumblr WhatsApp Email Link