excaliber said:
How many have you killed in Montana?
Click to expand...

Not a ****ing contest, so I will just say probably more then you.
I used to post on here of my kills, until it made its way thru the Internet to personal threats on my family. What I kill for wolves is my business and known by Montana state fish cops.
Bottom line is this thread is about one mans desire to wolf hunt.
If you hunt a wolf and are unsuccessful, hunt harder.
E

Not trying to start a ****ing contest. I was merely asking how many you've killed as you already know I haven't killed any.

Thank you so much Guys and Gals for your helpful information... and YES... I plan on getting some of those pelts for my wall. I say that with deep exhales because I know it's not going to be a easy pezzy hunting adventure... but nothing tried is nothing gained.... so I am going to at least try. thanks again...Dan
D

have you been out here after them yet? If so, how'd it go?

I have not left yet, but am penciling in the last week of Jan through mid Feb. I will be starting a fresh new thread when I leave, and will keep it updated throughout it's course for fellow wolf chasers.

Well.... I guess it's going to be a BUST for me this year, which is disappointing to me, especially sense I ran my mouth so much about going after those Wolves this year.... and bearing up under all the internet abuse that I had to endure... but that's okay because I seem to always be outside of the Normal Box...LOL. I should be out West... RIGHT NOW... but I'm not... oh bummer. I started dragging my feet when this crazy president election made me a little concern about getting back home if the country shut down or locked down travel movement, because i have to be home March 1st to start staining log homes.. which is what my wife and I do for a living... and jobs are already backed up. BUT... the MAIN REASON I decided to put it off until next year is this picture that my wife painted for me. I'm going to spend my energy turning that picture into a Billboard. We stain log homes so that we can install and rent billboards all along our major highways here in SC. For the last three years we have posted several of the yellow and red billboards like the picture below, and will be adding more with my Wife's painting on it like the one posted below... which will be our first of it's kind.. a 14x40 ft. We have them all along I-95 and I-26, so you would have to drive to Florida with your eyes closed for not seeing them... well... unless you went down I-20... and we need to get that route covered as well.
Our down time from work is Nov-March, which is our play time, and I got all excited about chasing those wolves during Jan-Feb... but.. I guess I'll focus more on these 100,000 two legged wolves that drive down our highways every day, instead of chasing those 4 legged wolves.... well... as least for THIS YEAR. Hopefully next year I will be more dedicated and more prepared. The HOT weather here makes us shut down again in July-August, and I have thought of exploring wolf country during that time... we'll see. I apologize to all of you Guys for letting my zeal cause me to look and sound like I'm talking out of my butt...LOL... but my heart is right about wanting to do the right thing in Life... as well with chasing those Wolves.
Thanks so much for putting up with me. May Jesus Bless You All in Many Ways. Dan

Here are a few pictures of the several we have up.

This is my Wife's painting...

This is her painting attached to a new statement on our new 14x40 ft billboard.

Here are a few of our normal boards, but most all of the other ones look like the bottom picture.

Now that I have my Wife's painting up on a billboard... I guess I can go wolf hunting...BUT now it feels like a time crunch to do 80 hrs of driving there and back... while trying to kill wolves for the first time by myself... and then be back ready to work on March 1st. Hmmmm.... as much as I hate it... i guess I will have to try it again next year. Thanks Guys for all your support. May Jesus Bless You All. Dan 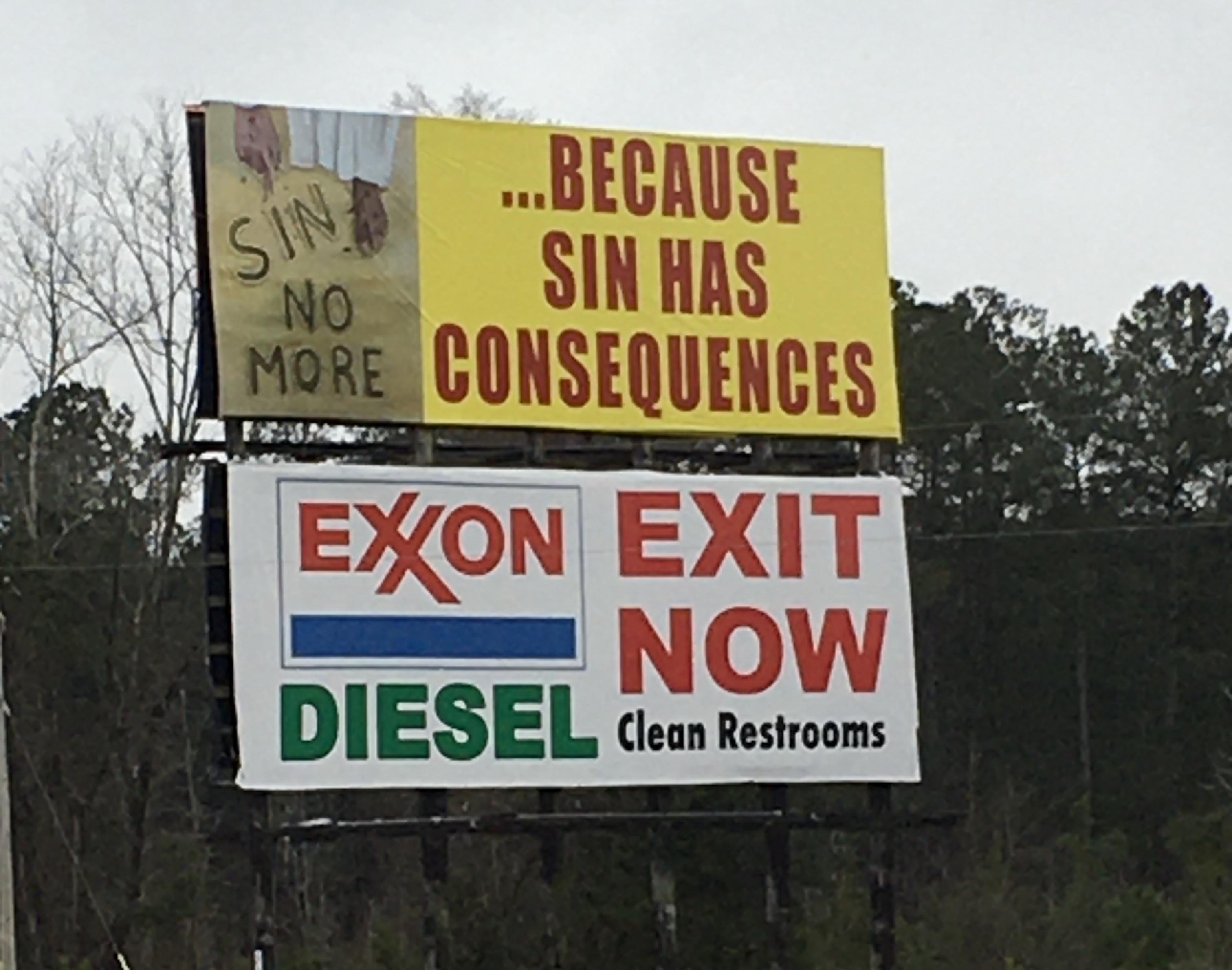 PS... If anyone out there Loves Jesus and wants to share the Gospel with Lost Souls and wants to sponsor a billboard in their area for a few hundred bucks a month... send me a PM, and we will try to make that happen. Thanks... Jesus Bless You All.

I know you Guys think I'm a armchair commando, but let me share some of my background so that you can better understand who I am. I'll start with the video stuff. Back in 1989-93, my Co-Partner.. Wade Nolan and I produced Quest Video Productions ... 23 in all. I was teamed up because of my bowhunting/hunting abilities.. and Wade had the camera producing abilities. Together we made a pretty good team. Now this was back when there was NO TV shows... no YouTube...NOTHING. The only way to watch a hunting show was to go rent a video at a video store or a sporting goods store... and our productions were the best in the industry... that's why I could get so many sponsors involved with us. I was the marketing manger... bowhunter on hand... camera man... off line editor and producer... and all my expenses were paid from the time I left home until I returned home by our boss in Oklahoma. We could go anywhere on his dime and produce videos, that was all the boss wanted... and we did. Below are some pics of a few videos we did. I was in 13 of those videos and became so popular that I even signed an autograph for a guy in the Anchorage Airport. I know it sounds like I'm bragging... and you will probably bash me some more for it... but I'm not... just sharing some stuff to clear up the misconception that I'm all talk instead of walk. My marketing part was FUN because I could get FREE toys from everyone in the industry...Zeiss, Sworvski, Bushnell, Leica, Federal ammo, TC Arms, Mossberg, Old Town, Darton Bows, Coleman, API Treestands... the list goes on and on, and we had a ton of camo clothes and all kinds of stuff... whatever sponsor I called, they sent it...Heck.. I even got a Nortic Trac from them. The Santa Claus UPS truck was always bringing stuff to my house. I hunted with the camera behind a lot of people for their first time on camera.... Tom Drury, Dave Watson, Bob Foulkrod, Dickie Betts, Jerry Peterson, Paul Meeks, and many others that I can't think of right now. Heck... I was the first one to do Solo-Video hunting kill scenes... nobody did it before me...and I had to do it with a full size Beta Max video camera that the Newsmen always carry. I use to pull a $40.000 camera up 20 ft in a tree on a 2 dollar rope... and then another rope for the tripod, and another rope for my bow and fanny pack... plus I carried all this into the woods with a treestand on my back with ten screw in steps. Looking back I don't know how I did it all. I've solo killed several deer... several hogs... one black bear in Canada... and 3 caribou in Canada. I could of easily done turkeys but I got tired of chasing then during productions. Now... everyone is a camera killing hero. I wish I had today's stuff back then.
One picture below shows a barren ground caribou in Alaska, that I shot at 125 yds.... believe it or not...it happened The other pics shows me on a spring bear hunt in Colorado in 1985...and I killed a nice cinnamon bear. I even killed a Sika Blacktail deer on Kodiak Island with my bow...only 50 yds..LOL. I've been shooting a bow since I was 5 yrs old. I have a ton of first place trophies from 3-D Tournaments... I pictured one below for kicks and giggles... my wife says there's 30-40 more boxed away.
Several years in a row in Nov-Dec I drove my van out West for coyotes, and spent every night in it...even a few nights in Montana with -20 temps at night... and without my heater turned on...I never used it... too *****-like to do that...LOL.
Been from New Mexico to Montana, and shot my share of them... but these wolves is what turns me on now.
I'll stop running my head for now. Thanks so much for putting up with my crazy wolf hunting ideas and over excitement.
May Jesus Bless You All in Many Ways. Dan

well the ops last couple of posts have finally convinced me to find the ignore button for this thread.

thank you Yote for the post... I sure am NOT scared away.... thanks again.
J

thank you Yote for the post... I sure am NOT scared away.... thanks again.
Click to expand...

WAlk and talk softly AND USE A BIG STICK,it just takes more thumps on some folks,,AMENthat day coming EVER KNEEL WILL BOW.....

Nothing like the MAJESTIC WOLF. Extremely smart and strong. I am an advid coyote hunter. Didn't have a chance to hunt wolves, but when you are in a cage with a 200+ lb female or male wolf you will definitely gain respect for them. I had a chance to be with some rescued wolfs face to face. It took about 10 hours and three or four days for the one 200+lb female to "WARM" up to me. The picture of me kneeling and she is on my left shoulder #37. She just brushed me and knocked me over. No chance in a fight with her. She stood higher than me (can't find that picture) with her paws, as big or bigger the my hands, on my shoulders breathing into my face with her teeth and drooling on my face and chest. I would really appreciate making a hunt on one of these animals, but only if it was a true hunt. None of these fake hunts where they bait and have tracking cameras everwhere. MAN to WOLF. Yeah and let's see who is the hunted!