antelopedundee said:
Copy and paste to a new or this thread. Is it an attachment?
Click to expand...

He managed to get it pasted over somewhere in pages 3-6 or so. A bunch of screenshots of political photo/meme things
H

Please review section 230 of the on-coming defense bill. POTUS intends to veto the bill should section 230 not be deleted (OAN). Guess - was there a major government deception in 1963?

Hugnot said:
Please review section 230 of the on-coming defense bill. POTUS intends to veto the bill should section 230 not be deleted (OAN). Guess - was there a major government deception in 1963?
Click to expand...

Removing the bill would make sources like longrangehunting.com liable for things that it's userspost instead of shielding the website and forcing suits to be direct to whomever originated the post. (which is currently how it works)

Removing it will lead to to major and somewhat immediate sensorship from websites and social media outlets of anything they think may land them in any sort of of a lawsuit.

Removing it would mean that if I quoted the above post, and another user on here saw it and was offended I could be liable for any lawsuits brought to bear even though I didn't create the post, and it wouldnt matter if I quoted it to agree with it or to disagree with it. Only that I quoted it.

If it gets repealed it will have a huge negative effect on our freedoms of speech and expression on the internet.

Please read up on it before you make a decision.

The following link is from the electronic frontier foundation. They're basically the NRA for the internet. They are constantly working to keep the internet from being censored and controlled by governments and corporations.

Section 230 of the Communications Decency Act

47 U.S.C. § 230, a Provision of the Communication Decency Act Tucked inside the Communications Decency Act (CDA) of 1996 is one of the most valuable tools for protecting freedom of expression and innovation on the Internet: Section 230. This comes somewhat as a surprise, since the original...

From the executive order:

Section 230 was not intended to allow a handful of companies to grow into titans controlling vital avenues for our national discourse under the guise of promoting open forums for debate, and then to provide those behemoths blanket immunity when they use their power to censor content and silence viewpoints that they dislike
Last edited: Dec 4, 2020

If you don't want to read this

Section 230 of the Communications Decency Act

47 U.S.C. § 230, a Provision of the Communication Decency Act Tucked inside the Communications Decency Act (CDA) of 1996 is one of the most valuable tools for protecting freedom of expression and innovation on the Internet: Section 230. This comes somewhat as a surprise, since the original...

here's the take away 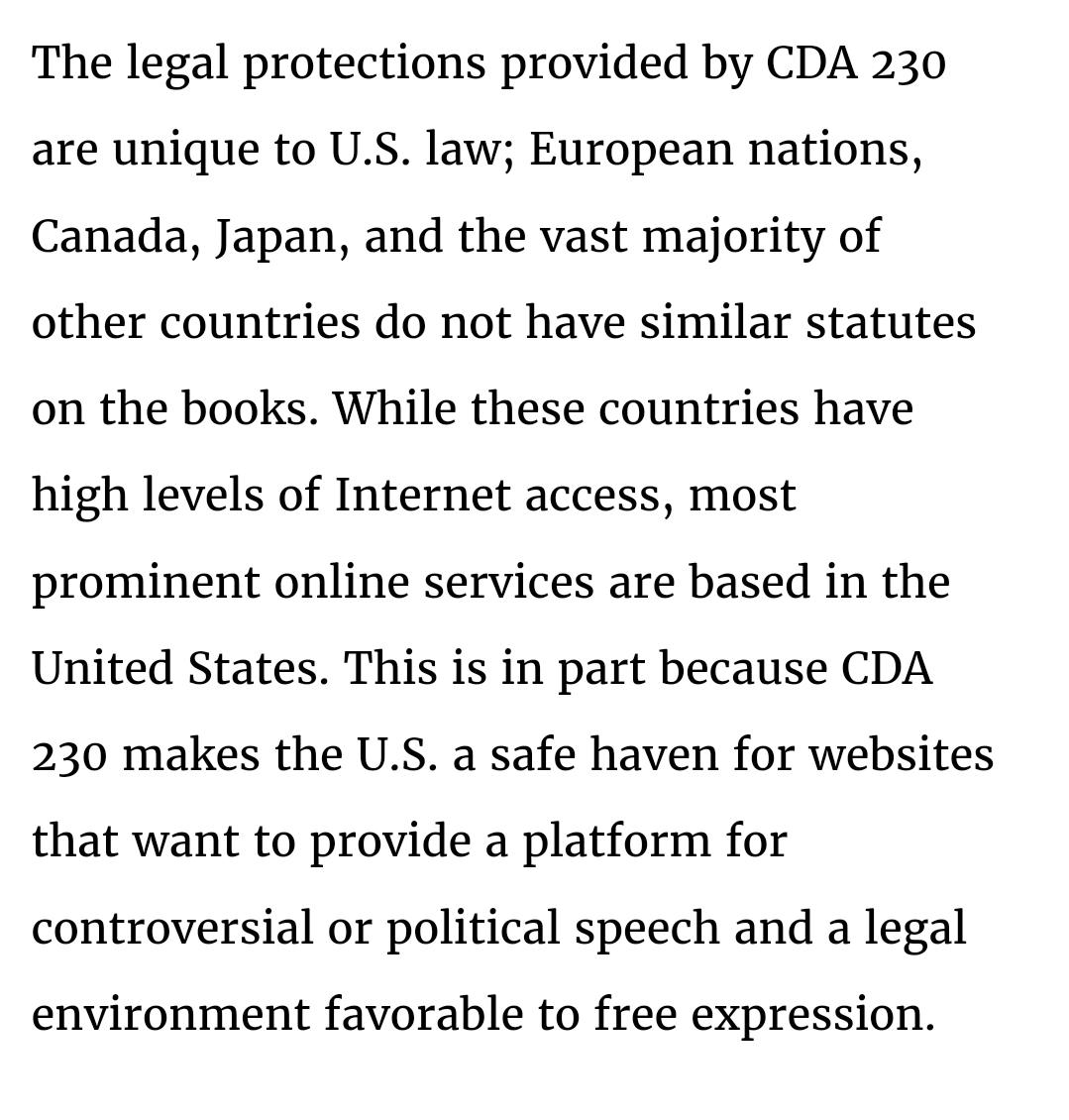 Let's not allow the government to decide what political views we should hear or be able to spread. That would effect every one equally and negatively.

Its one thing for a business to decide what it wants to have on its site. We can always take our dollars/data/ad revenue somewhere else. But when it's the government doing it you have no other choices.

The First Amendment states: “ Congress shall make no law respecting an establishment of religion, or prohibiting the free exercise thereof; or abridging the freedom of speech, or of the press; or the right of the people peaceably to assemble, and to petition the Government for a redress of grievances.”
H

From the executive order:

Section 1. Policy. Free speech is the bedrock of American democracy. Our Founding Fathers protected this sacred right with the First Amendment to the Constitution. The freedom to express and debate ideas is the foundation for all of our rights as a free people.

Section 230 was not intended to allow a handful of companies to grow into titans controlling vital avenues for our national discourse under the guise of promoting open forums for debate, and then to provide those behemoths blanket immunity when they use their power to censor content and silence viewpoints that they dislike

Could this be abuse?

Hugnot said:
Section 230 was not intended to allow a handful of companies to grow into titans controlling vital avenues for our national discourse under the guise of promoting open forums for debate, and then to provide those behemoths blanket immunity when they use their power to censor content and silence viewpoints that they dislike

No, it's an unintended consequence. One that has been extremely beneficial to free speech.

Again:
If a private or public company is censoring something that we either want to say or want to hear, we have the choice to go somewhere else.

If the government is in control of what is censored we have no other choices.

Or to put it this way:

Do you want to allow the government to control what is censored and what is not with how you feel about the upcoming president, his political party, and their goals and values?

This thread would have been deleted before the 2nd post was made in that scenario, and post #10 would be prophetic.

This is another one of those shall not be infringed things. It's written similarly in both the first and second ammendments, and written that way for a reason.
H

Sec. 2. Protections Against Online Censorship. (a) It is the policy of the United States to foster clear ground rules promoting free and open debate on the internet. Prominent among the ground rules governing that debate is the immunity from liability created by section 230(c) of the Communications Decency Act (section 230(c)). 47 U.S.C. 230(c). It is the policy of the United States that the scope of that immunity should be clarified: the immunity should not extend beyond its text and purpose to provide protection for those who purport to provide users a forum for free and open speech, but in reality use their power over a vital means of communication to engage in deceptive or pretextual actions stifling free and open debate by censoring certain viewpoints.

No, ALL media is biased. All people even.

Will they edit CNN? No they will censor them.

Humans are basically incapable of not being biased. Even trying not to be, there is almost always some amount of unconscious bias going on. It's part of how our brains work to make decisions. No company will ever be perfect, and some are better than others. But none are truly unbiased.

Allowing the government to be in control of censorship of speech is a direct violation of the 1st amendment.
Last edited: Dec 4, 2020

david g ranes said:
The bottom line is if things go to the worst that it can go to this web sight will no longer be needed because our guns and ammunition could be mostly gone or we all could be listed as criminals for not turning our guns in the paper trails we all leave behind us every day by ordering things on line or purchased with a credit card can all be traced in short order not saying it will happen but it is possible and I feel this web site realizes that and for their lively hoods it’s not in anyone’s best interest to delete anything which is not hurting anyone the trick is to pass this on and to recruit like minded people to this site to add to the knowledge and capabilities of what a good group of people that care can accomplish stay strong in our endeavors and promote our cause to maintain our rights. David
Click to expand...

My interpretation of POTUS' executive order is that it is intended prevent large scale bully tactics & mob action by removing certain protections enjoyed by the bully elite who make capricious and autocratic decisions of who may present viewpoints differing from the bully elite or faddish servile followers. The executive order does not send out PC police to arrest non-believers but the media and various forums encourage PC behavior. Anti gun fits right in with the PC stuff.

Twitter & Facebook are the new age propaganda mills, that have dominated by sheer strength public discourse because of privilege, undeserved government protections and limited opposition.

Being told to shut up, go away or sudden suspension prevents any kind of rebuttal to the delight of mob groupies.

These "handful" of companies masquerade as examples of free speech and present arguments that government will stifle their activities but in reality, planned legislation will remove their dominating advantages giving the rest of us an opportunity to enjoy increased free speech in accordance with the 1st Amendment.

Removing their protections is not the same as controlling their activities - sure, they can kick people off that they don't agree with but be prepared to deal with the consequences. Imagine being continually bashed on some forum and not being able to make a rebuttal, sounds like being damaged.
Last edited: Dec 4, 2020
H