First NZ Tahr with the 338 EDGE

Midweek after Labour weekend Kiwigreg and I headed south with a number of things to do. First plan was a couple of days looking for Tahr, next was a long range shoot with the reprobates from the deep south and thirdly the pickup of the new Frewza which Crazyman kindly picked up.

Yawn was supposed to come on this trip but he pointed out that he had tickets for the opening session of Michael Jacksons new movie, seeing as he had his MJ costume ready he flagged the Tahr hunt. :

First day on the hill was an early start, walking further up the creek to a suitable spot for glassing. I spotted three tahr relatively high up further up the valley so off we went. When underneath them we climbed up a spur to a tussocky knoll where we could have a better look.

Another group of nannies were seen but climbed high into the bluff and out of sight, a few younger bulls were mincing around on a near vertical face. I then spotted what I thought was a decent bull lying up in some scrub between two bluffs.

After an eternity he stood up for a stretch and copped a 300gn SMK for his troubles. The range was 491yds with zero wind. At the shot he jumped out of his bed and took a leap downhill out of site. I was feeling very confident with the shot so we waited 20 mins and headed up for a gander. 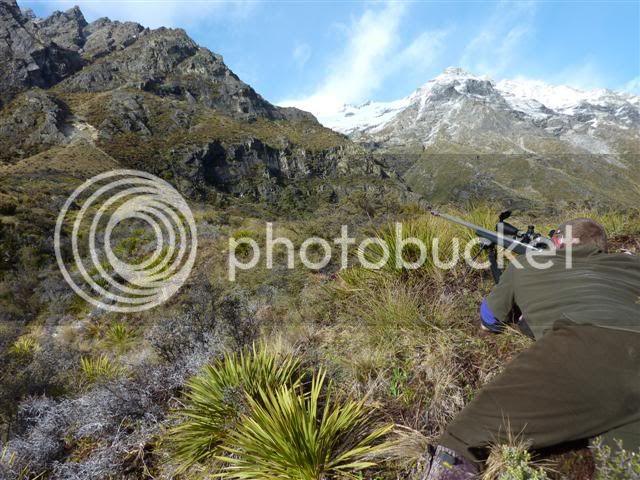 Where the shot was taken from, Bull was bedded up in the bluffs mid left of pic 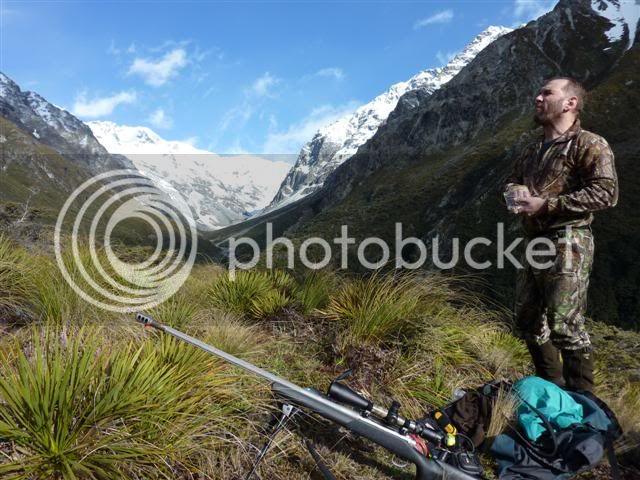 Kiwigreg prepping himself for a climb up to the bull

After a bit of mucking around we got into the spot and I quickly found the bull lying dead about 25 metres below his bed. I was disappointed to see he had 10 1/4" horns, I would have sworn he was over 11" but thems the breaks. 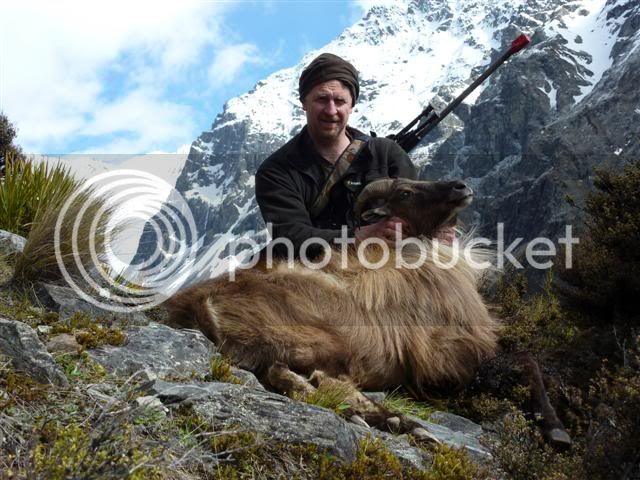 The young bull, first Tahr for the 338 EDGE 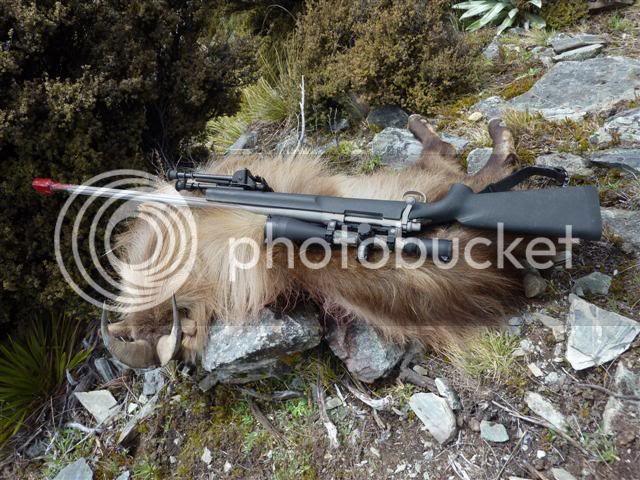 By now it was getting hot and the Tahr had disappeared so we caught a few winks up on the hill. After lunch I spotted a few more across the valley and again further up so off we went. 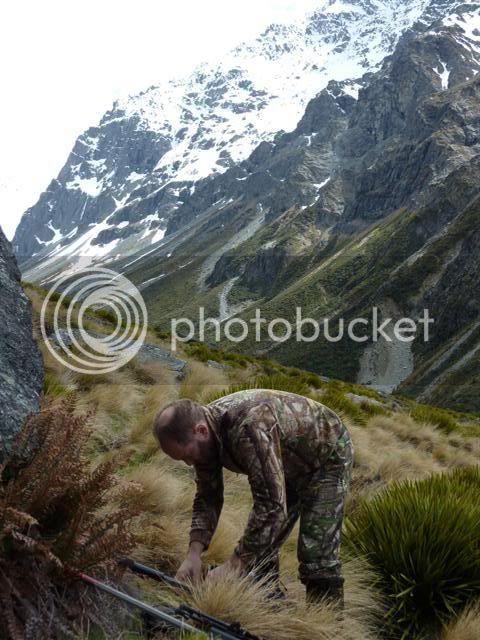 Getting ready to head after the second mob

On the way we had to criss cross the bouldery stream, on one crossing I glanced up and saw a Tahr moving on a high up bluff, a quick gander through the binoculars showed 30 plus Tahr moving down to feed. Some were playing the fool on the real steep stuff, god knows how they didn't
come a gutsa. We had a terrible stalk ahead of us through thick scrub and spaniard grass and ended up struggling to find somewhere to shoot from. After a while Greg managed to nail a few nannies and secure his first Tahr 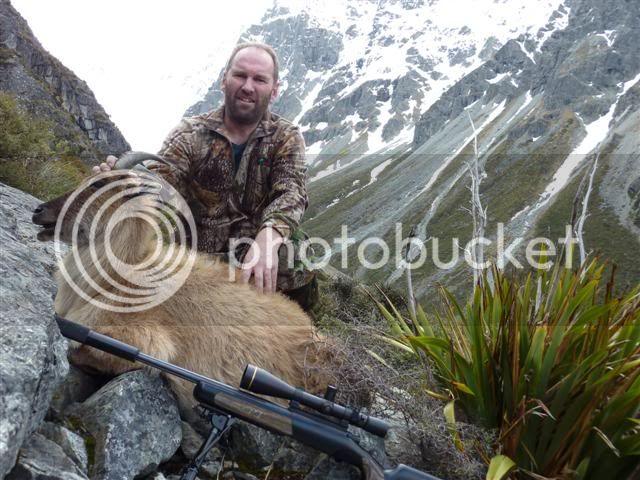 Greg with his first Tahr

Next day was a bit less eventful, we had less time but still saw a good number of nannies and juveniles. No sign of bulls anywhere.

I managed to get a nice shot at a nanny which was watching us from a tall rock. She stood facing us for 15 minutes or more. When she finally turned the Edge sent some joy her way and sent her catapulting off the bluff. 690 yards, yee ha. I headed up with the rifle to get some pics but got bluffed out. I spotted another route to take but it meant heading back down 200m elevation and reclimbing the next spur, even that looked dodgy to say the least so I headed out with no photo 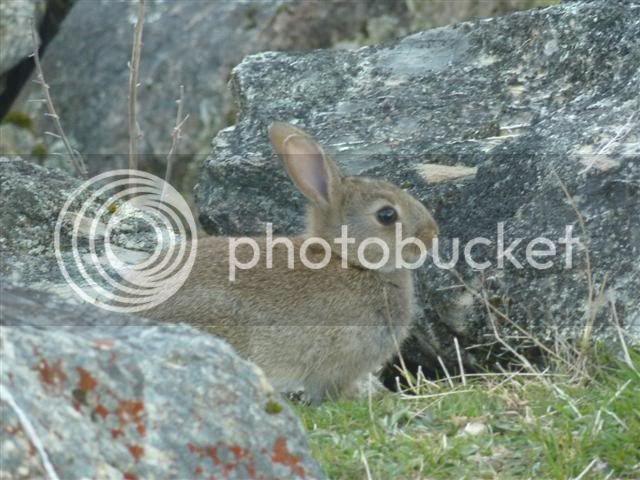 Then we headed over and caught up with Crazyman, The Claw, Ken, Gimp, Gordy, Tussock and 45South for some gong ringing and a yarn. A good group of fellas, cheers for organising that Sam and Gav
The conditions were testing to say the least. 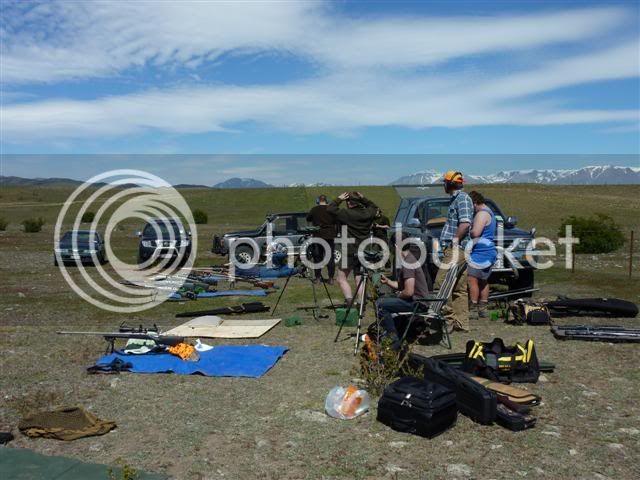 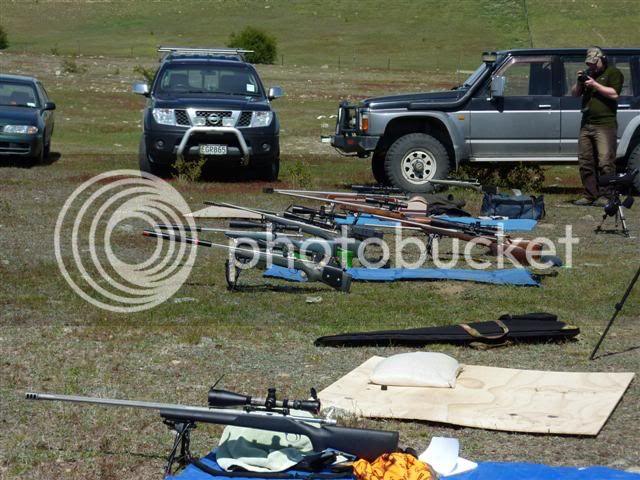 Nice shooting. You got onto a few more animals than what I was able to.

Nice work Steve. Im itching to get back down that way again with the Lapua

Long way from here but well worth it, I was going to try and squeeze in a Chamios and a Red in Kaikoura on the way through.

Getting a team from North Island to go to the Great Bunny shoot is up there on the to do list as well, who knows tie the whole thing together, make a fortnight of it.

Tahr is very good eating, some prefer it to venison but not me.
J

Mate i rate Tahr very highly they are awsome to eat .

Great right up . I'm crossing the ditch again next year to shoot some more of those high mountain goats now you have me wondering do i bring the edge or not.

Steve, great writeup and pics! I really enjoyed it. Congrats to you and your buds on a good hunt and getogether. Some awesome country down there!