First elk with the 270WSM

This hunting season ended well and I thought I would share a little of it with everyone. I was actually driving into a good area to find Mule deer bucks and had stopped to glass a ridge and all of the sudden about 80 head of elk sky lined themselves. They saw us and just turned around and eased of back into the sage brush bowl they were in so we just drove nice and slow till they were out of sight and we were at the bottom of the bowl they were in. Me and my hunting partner jumped out and hoofed it up the draw, I spotted the last elk just going around the back side of a little ridge in the center of this bowl so we crawled up to the top and got set up for a shot to a grassy spot on the opposite side of the bowl. I was shooting prone of a bipod and got my breathing under control while they feed out at 335yrds. I have been a little concerned about the Bergers performance so I was loaded with 140 gr Accubonds which were shooting higher than the Berger loads. I finally picked out the cow I wanted and we both got on her, my buddy was whispering “hold low, hold low”, he knows I have been having a hard time defeating years of Kentucky windage and creeping up and shooting over my targets. I sent it and she dropped like a rock, I stayed on the gun and watched, after a few seconds she tried to get up and we saw I had creeped up a little and spined her. She wasn’t going any where so I decided it would be a good way to test the Bergers so I lined up a 140 gr Berger on her heart and let it go, it was perfect. 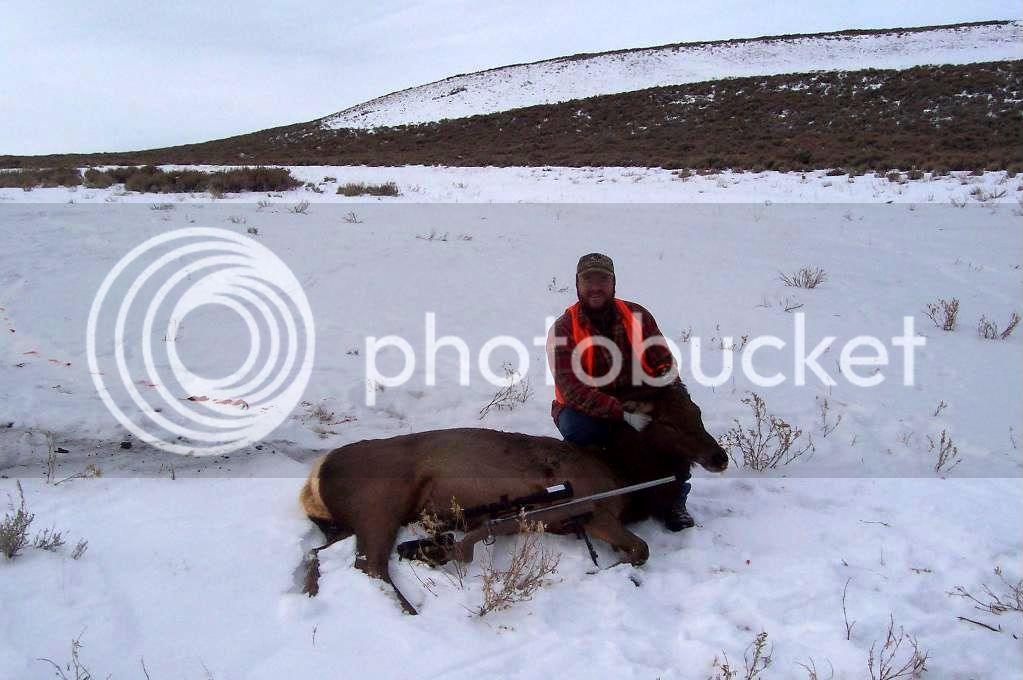 Not long range but it did give me a good look at bullet performance, I tried to get some good pics of bullet performance and the damage done. The Accubond center punched her spine and took out two vertebrae, nice clean entrance and the exit hole was about quarter size. Massive amount of blood shot but it was in the layers as her heart was pumping the actual blood shot meat was about 4lbs. I really like the Accubond, it hits real hard but does not blow up.
The Berger had a nice pin hole in and went through about 3 in of meat at the back of the shoulder, it started to open just before hitting a rib, blew the rib out and hit the on side lung but did not do to much damage, then it hit the heart and turned into a buzz saw blowing a softball sized hole clean through it. The off lung was damaged and it exited between two ribs, I found the jacket under the of shoulder. It did very little meat damage and performed just like it is advertised to, kinda like a big game varmint bullet, went in then blew up in the center. This cow was bigger than average and about as big as a cow comes, that was what got her ticket punched, she had about 40lbs more meat than an average cow. Rifle specs are Savage model 12 26 in barrel in a 270 WSM. B&C Medalist stock topped with a WOTAC 4-14 scope in Weaver Tac rings on a EGW 20MOA base weighing in at 12.5 lbs fully loaded. Load was 71gr Retumbo with Fed 215 primers both Bergers and Accubond .015 of the lands. 140gr Berger @ 3300fps and 140 Accubond @ 3341 fps.
I have been shooting a 300 Weatherby for elk and just got feed up with it so I got this 270 WSM and it is absolutely an awesome cartridge, everyone that has seen it in action was amazed how hard it hits.
Thanks for everyone's help on this forum hope you enjoyed the pics.gun)
4

Great post, thanks for sharing and congrats on the elk. My son is shooting an A-Bolt II in 270 WSM and he really likes it. He took a cow a couple years ago and a handful of deer with a 150 partition and it did well. I have been looking for some feedback on the 140 AB so this will be helpful. We've only used H-4350 and only pushed them to 3000 fps. I didn't even think about trying Retumbo, I may have to do that. What brass do you like with this?
M

Great pics and write up! Congrats on the cow. That 270 WSM sounds like a great cartridge.

Congrats on the cow, enjoyed the reading and the pictures. Thanks for posting.
B

Moman said:
Great post, thanks for sharing and congrats on the elk. My son is shooting an A-Bolt II in 270 WSM and he really likes it. He took a cow a couple years ago and a handful of deer with a 150 partition and it did well. I have been looking for some feedback on the 140 AB so this will be helpful. We've only used H-4350 and only pushed them to 3000 fps. I didn't even think about trying Retumbo, I may have to do that. What brass do you like with this?
Click to expand...

I'm working on a write up of a deer I shot with the 140 AB that cleaned it's clock and I found the bullet in the dirt behind the buck.
I had the best luck with the Remington brass, it went 20 firings with no failures, the Norma and Win failed at 4 and 8 firings. Also try Magpro or H1000.
L

Congrats on the elk and thanks for sharing!

Nice rifle; my hunting partner has identical rig, save the glass.

Thanks for the report!
B

Thanks for all the back slapping I sure did learn a lot this hunting season. I found that defeating my built in Kentucky windage system was the hardest thing to try to over come, I knew where my rifle shoots and felt confident in my abilities at the range or out blasting rock but when I got down to taking a shot on game I found myself holding high and it cost me two deer at 790yds, the shot went right where I was aiming and it was right over them. It's like I went brain dead, the scope I shoot has 2MOA marks on the reticle and I looked at my chart when I was getting ready for the shot on this cow and I needed 3.5 MOA down but instead of holding on my 2nd hash mark for 4MOA I held low with my main cross hair, I didn't use the all the tools I had given my self but instead slipped into Kentucky windage mode.

The next biggest thing I learned was I need a Kestrel meter, my cheap Caldwell is giving me low wind speed and I under corrected one time an Elk, I never over correct for wind so I kept all my long range shots so that if I under corrected it would drift into the shoulder not into the guts. But I found out at LR if your of on your correction your most likely of the animal.
I had a couple goes at using LoadBase 3.0 on my Axim in the field and the corrections were spot on so I was perty stoked about that, I just need the Kestrel to give it better inputs for windage.

By the way I really dig what the Bergers are doing. That bullet in the picture has most of it's jacket, it pealed around it's self down to the base, the rest I could not find in the mess.
Share:
Reddit Pinterest Tumblr WhatsApp Email Share Link

C
Fun with the elk rifle