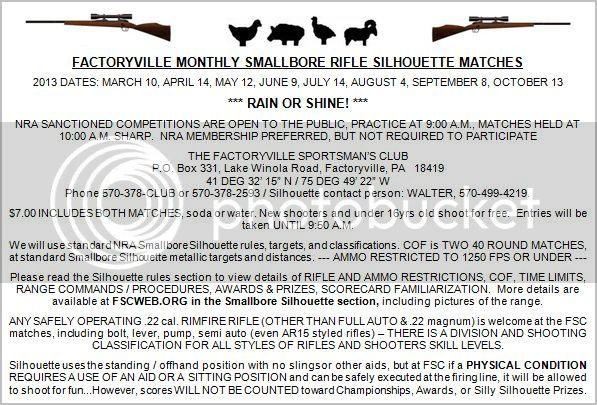 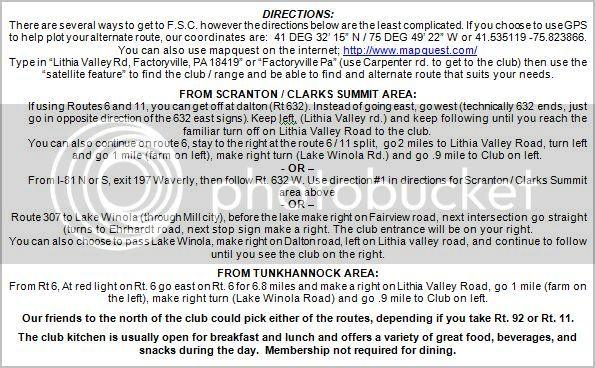 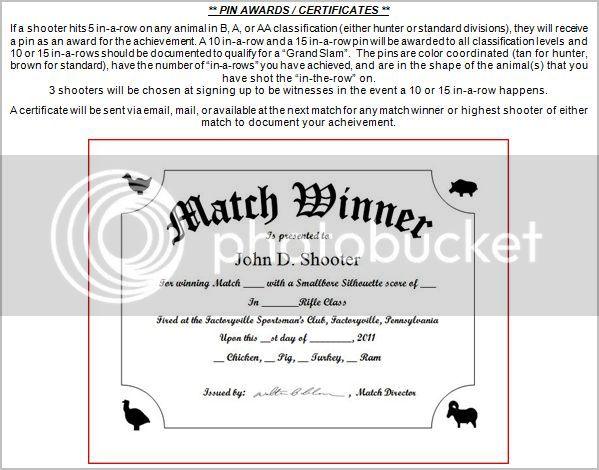 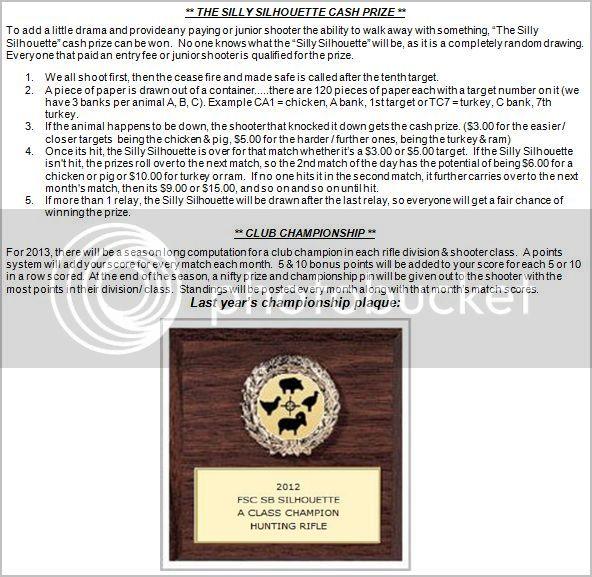 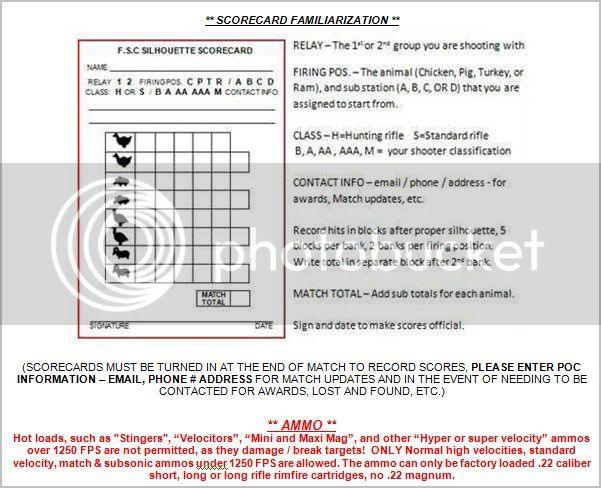 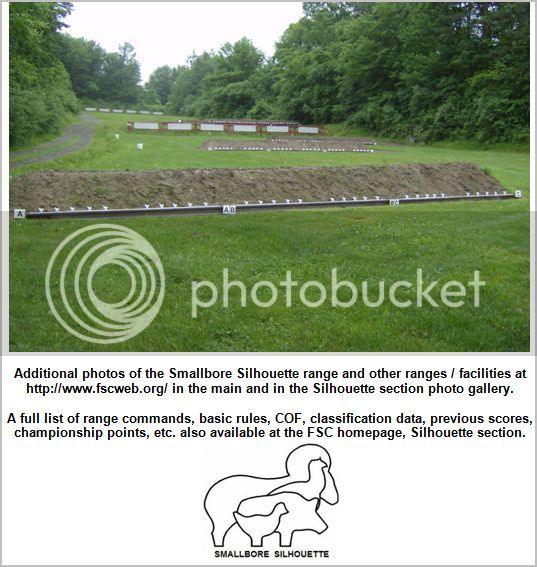 A shameless bump for the matches that start up next week, just a reminder for those in the area that are interested in attending.

Last month we had 13 shooters (considereing the cold weather, not so bad), including a shooter that made the trip from Staten Island (who shot 2 ten in a row strings) and 1 from upstate NY along with a good portion of the regulars. We also had 1 junior shooter, and a new shooter to the sport. Both "silly silhouette" cash prizes were won.
T

Though I know it's tough on Mother's day, we will be having our monthly match this Sunday, May 12th at Factoryville Sportsman's Club, Factoryville, Pa.

Last month we had 14 shooters, 3 10 in a rows were shot by 2 different shooters, and one gentleman pulled off a 38.
T

Our June match will happen this Sunday June 9th. Practice starts at 9:00am, matches start at 10:00. $7.00 for both matches, Newbies and juniors shoot for free!

Last month the anticipated attendence was low for Mother's day, only 6 shooters.
T

Just a reminder that we'll be holding the next Smallbore Silhouette match at Factoryville next week, July 14. Practice at 9:00am, matches start at 10:00am. $7.00 for both matches, newbies and juniors (under 16 years of age) shoot for free.

The scores are compiled and will count for the Club Championship, this year's trophy will be a championship pin.

Last month we had 15 shooters, with 5 onlookers that were very interested and hopefully will return with rifle in hand.

For those that have air rifles, I have ordered a limited set of 1/10 air rifle silhouette targets, I don't know if the banks / targets will be ready for next week, but just in case might as well bring the air rifles, LEAD PELLETS ONLY. Again I don't know if I'll have enough time to get it together for July (it may be a really crude setup) but I should be able to get it together for August.

The AR silhouettes will be for fun only this year, with the intent of doing sanctioned matches next year either before or after the SB matches if popular enough this year. Distances are 20, 30, 36, 45 yards for air rifle.

Preliminary entry fees for Smallbore in 2014 will have to be raised to $10.00 for both matches, with $5.00 for a 40 pellet Air Rifle match if the AR matches do happen. Another change will be practice / site in for Smallbore is going to be reduced to 1/2 hour to help facilitate the AR match.
T

Hello all, just a quick bump that there will be a Smallbore Silhouette match this upcoming Sunday, Sept. 8 2013 @ FSC.


Afterward for the Sept & Oct matches, we will be having a "fun" 20 pellet Air Rifle match (due to having one 40 animal set) 5 animal banks per shooter, if time and interest allows it may turn into a 40 pellet one. This is to gauge interest in having sanctioned Air Rifle Silhouette matches for next year with a full compliment of targets. There is no charge for Air Rifle Silhouette for the remainder of 2013.

Hello all, just a quick bump that our last Smallbore Silhouette match is this upcoming Sunday, OCT. 13 2013 @ FSC.

Afterward we will be having a "fun" 20 pellet Air Rifle match (due to having one 40 animal set) 5 animal banks per shooter, if time and interest allows it may turn into a 40 pellet one. This is to gauge interest in having sanctioned Air Rifle Silhouette matches for next year with a full compliment of targets. Looking at previous participation the last 2 matches, looks like we'll have sanctioned matches in 2014, probably before the smallbore matches.

Club championship will be decided and this year will have a champion pin as a "trophy" for top shooter in all shooter classes & vouchers for free match in 2014.

Will post up some end of season stats for the numbers guys.
T

Just to wrap up the season,

To everyone that attended the FSC smallbore silhouette matches, helped with resetting targets, setting up and tearing down, and helpful advice along the way, I'd like to get the oppurtunity to say thanks for your support and hope that you've had a good time, and I look forward to seeing you in 2014.

Next year's schedule has not been locked in yet, but a few tentative changes:

Smallbore silhouette matches (2 40 round matches) following Air Rifle silhouette10:30ish to completion, estimated to roughly 12:30 / 1:00 depending on amount of relays.

For Smallbore, I'll try to get better championship prizes & Silly silhouette $3.00 for chickens and pigs / $5.00 for turkey and rams will continue as it gives anyone a chance to win something each match. A copy of the championship points as of the end of 2013 season was sent out and will be (last known) starting classifications for 2014.

To recap the 2013 season, we had 42 different shooters that accounted for 86 entries from 3 states and won over $100.00 in prizes. Though we had more different shooters this year, our average shooters per match dropped by 2 from 2012 to 11 per match, with our highest attendance being 15 shooters. 10 ten in a rows were shot throughout 2013.
Share:
Reddit Pinterest Tumblr WhatsApp Email Share Link