I'm a Berger fan hands down ! But what do know I only have 42 mounts !
I do have one complaint ...they dont expand at 3027 yards if you dont hit the steel target! 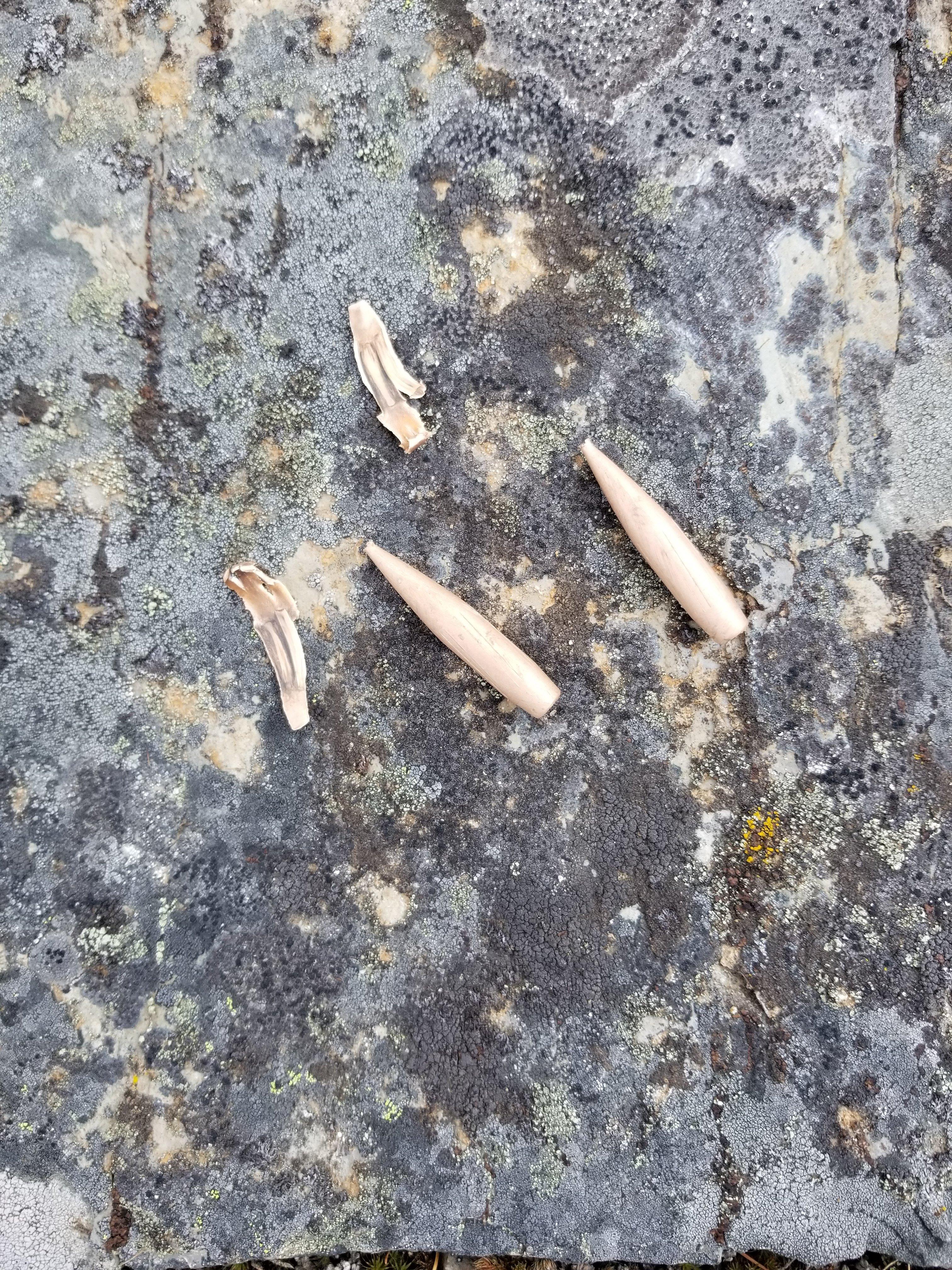 The two 300 gr. Berger Otm's recovered at the target . Also some pieces from a hit !

The Bergers performed Amazing on my last year Spring Bear ! 1 shot where your supposed to hit and down it went !
No trouble with my Elk last year at 1244 yards .
I believe any bullet will fail if not placed right.

I should have some results with the 230 bergers here in a few weeks from one of my 300 Rums, if my heart trouble slows down some .

Well, I have killed a lot of stuff too with Bergers. But every time I cut an animal open I'm not inspired by the way the projectile held together. I have used a lot of 250 elite hunters out of a 338 Norma and33 Nosler--and I always have a dead animal--when I started having problems is when I stepped down..I shot a very big axis buck one evening with a 130 grain out of a 6.5 Grendel (watched the buck drop, and waited for 2 min, no movement, got out of the stand drove over--gone...no blood. Again I shot about a 200 lb hog with 6.5 Grendel 130 grain berger--legs came out from under him...walked up the hill to take a look---gone. I haven't loaded any since. I still use berger s in my 7 SAUM (175 EH) and in my 338 Norma (250 EH) but have went to other bullets for preformance on game--Love the way berger said fly, but not the way they breakup...
Last edited: Oct 30, 2020
H

I am done also. Shot a pronghorn buck at 711 yards with a 180 hybrid out of my 280ai. Perfect shot, directly behind the shoulder. The bullet blew up on impact. The buck ran a circle and faced dead away from me so I put one straight up the chute. He dropped then.
Killed a pronghorn doe at 535. She turned at the shot and I hit her back through the ham (my fault) and the bullet penetrated completely leaving a silver dollar exit after passing through the femur. Shot her a second time to finish the job and once again silver dollar exit with a perfect behind the shoulder shot.
Killed a mule deer, running at 250. First bullet hit back in the gut (not proud of any of these shots btw) and penciled through, second shot through the neck and penciled through with the buck still running, last shot rear ham grenading on the femur and nearly severing the leg.
The bullet was entirely to unpredictable for me to continue hunting with it. It sucks because they shot great (2 inch at 500) but I can't handle penciling and exploding.

215 grain Berger after passing through Colorado bull this year. Pieces found in hide on far side. 587 yards, 300 PRC +P Defensive Edge. Bull hunched up for a second, fell over dead.

hunter0925 said:
so I put one straight up the chute.
Click to expand...

Wiping the tears out of my eyes on that one....

Wiping the tears out of my eyes on that one....
Click to expand...

I had to just hold my tounge on that one !

Tried 215's with several powders, primers and seating, no accuracy. The 210's are lasers in same rifle with little load development. I've seen a large number of elk, deer and antelope drt with he VLDH bullets, only one we had to track which was hit in the hip but ripped up the kidney.
T

Well I've killed three elk with weapons other than my 215 bergers.

Then a bull with a 100 grain hornady interbond(??) from a .243 - the bull took one step sideways and peacefully laid down and went to sleep.

I don't have all the experience in the world, but I'm not seeing that these Berger bullets make anything "deader right therer" than anything else I've used.

I’ve killed grouse with rocks. Weapon def helps but not only way to kill it lol placement is critical
T

I haven’t had a chance to shoot an animal with them yet but it was a big leap for me to give Berger a try again after having failures in the past. They shoot amazing in my 300PRC and most of what I have read is positive. Reading these threads makes me second guess things.

I wouldn’t second guess I’ve killed a lot of animals with them from mule deer to caribou and moose bears ect.

treillw said:
I might as well be bringing up politics, but here it goes. I've been shooting the 215 Bergers out of my 300 win since 2017. Developed a great load shooting sub half minute at 2705 fps.

2017:
2018:
2019:
2020:
The first shot was at about 100 yards. None of the shots, except one head shot, had exit wounds. I found one copper jacket laying against the far side ribcage. The autopsy revealed that the internal organs were essentially fully intact. I saw no signs of the one "boiler room" shot. The other one, I saw a hole the size of my pointer finger through the lungs. I could barely stick my finger through the hole. The bullet didn't exit the far side of the animal, but penciled through the lungs - I would have expected to find a pencil exit.

I guess I'm starting to see why "not suitable for hunting" is stamped onto the box.

Unless somebody can show me what I'm doing wrong here, I'm pretty sure I'm done with the 215 hybrid. I might try the 205 Elite Hunters out. I'm also open to other suggestions.
Click to expand...

I have harped on this forever and I am sure many have read my beliefs. So I will stop at that.
You must log in or register to reply here.