Custom build for a teenager?

I built a rifle for my daughter. I used a tikka action bug hole barrel in a MDT LSS chassis and LUTH-AR stock. It is in 6.5 Grendel and she absolutely loves it and can shoot it better then any other rifle she has shot. I really liked the adjustable LTH stock so it fits her perfect. She was shooting rock chucks this summer several between 4-5 hundred yards she wouldnt shoot the ones closer says it was "to easy". I think I created a monster...
K

I’ve had mixed luck with this. I tried a Wby Vanguard youth model for my daughter in 7mm-08 and it kicks like a demon. Seriously I hate shooting it and everyone else does too. Now it sits in the safe. My daughter does incredibly well now with a Tikka in .243 but her favorite is my custom .300 Win with a McMillan stock and suppressor.

Fit and stock design is so important. Take your time here and get if right. Maybe stick with something in the .260 Rem or other fast 6.5mm range. 140gr bullets at 2900 are enough for anything in NA.
N

It was a surprise to me just how high I had to place the adjustable cheek piece on the stock of my wife's 10/22. I ordered the youth model version of the stock to get the LOP somewhere close, but the cheek piece adjustment was a revelation! Up until then I had not really sorted out what needed to be different or how for a rifle to fit her petite frame well.

I think BnG nailed, stock fit is crucial and while you may know what to look for, what gets it to work for her will be as others have commented - it won't fit you at all. Find a stock that fits and works. Then figure out what her ideal balance is. In my wife's case the CoG of the rifle needs to be well back, near the rear of the action. Then worry about chamber, barrel length & profile, and all of those other things.
S

thaught said:
Looking for some thoughts on a custom build for a teenage daughter. My daughter is almost 18 yrs old, 5'4", 85lbs and isn't going to get any bigger. Has anyone else built a rifle for a smaller person? What do you recommend for stock length?
Click to expand...

I started my kid early. He shot a BB gun at about 3 yrs old and had very little interest so I put him in a 22 at 3 yrs old with reactive targets which took his mind off the bang. Late summer after he settled in I got him behind a 22-250 varminter with a muzzle break at 3 years old shooting at woodchucks. He loved it. So he shot it several more times as he settled with the big boom and little push. By the age of 7 I built a dasher with a muzzle break and he shot it very well with no thoughts of recoil or big boom. At the age of 7 he killed his first doe. By the age of 10 he was shooting benchrest competitively. By the age of 12 he was shooting a 300 wsm and was a very little fella and had no issues as he learned to manage recoil. Today he is 17 and weighs maybe 130 and is building a 338 edge back country hunting rifle. Recoil or big boom does bother him at all. Keep things positive don’t shoot nothing big until she relaxes and gets the fundamentals well and let her decide if she wants to try something bigger.
just my 2 cents.

orifdoc said:
I’ve had mixed luck with this. I tried a Wby Vanguard youth model for my daughter in 7mm-08 and it kicks like a demon. Seriously I hate shooting it and everyone else does too. Now it sits in the safe. My daughter does incredibly well now with a Tikka in .243 but her favorite is my custom .300 Win with a McMillan stock and suppressor.
Click to expand...

I bought a 243 Vanguard and installed a Howa/Hogue youth stock purchased from LSI, the Howa importer. Hogue won't sell you one.
It works well for my daughter, and neither one of us minds shooting it.
You might want to change the stock.
M

I bought a 6.5 Creedmoor, sorry 6.5CM haters, in a Howa 1500. Contacted Howa & ordered a youth stock for it. They were very responsive and helpful. My twelve year old grand daughter bagged her first deer with it. My 10-12 year old grandkids all shoot it with out fear of excess recoil. I'm loading 135 Gr Berger Classic Hunter bullets using H-4350 powder and getting sub-minute accuracy out of a $600 rifle. There are some good looking Weatherby Vanguards, essentially Howa 1500's, the look mighty fine. I was always a 243 or 6mm fan for a kids starter hunting rifle, but the 6.5 Creedmoor changed that. 26 cal is more effective at longer distances than the 24 cal options. Sorry 243 and 6 mm, you're now considered varmint rifles in my safe. I was put off by the 6.5 CM hype, but I also have a Diamondback AR10 that also shoots sub-minute accuracy. The 6.5 CM & promotion caught my eye. Obviously, the 6.5-55 owners have known about low recoil 6.5's and are probably chuckling. I absolutely wouldn't use the 6.5 CM, or any 6.5 round for elk & larger. Go with the 308 or 7MM-08 if the rifle will be used to hunt elk. Current bullet technology has been a game changer. Look how the 264 Win Mag flamed out back in the 60's. Now even it is back in vouge!! However, still not a fan of anything less than 27 caliber for elk & larger. Need 1500 ft-lb of energy or more at impact distance to put down the larger game. 6.5 is a good deer gun. Just sayin!!!
W

As most everyone has mentioned, stock fit is KING when putting something together for a kid, or even a grown person for that matter. It makes shooting a lot more fun. I had a M700BDL (bought back in 1971) that even I couldn't shoot more that 4 times. The stock was terrible. Sold it and that is the last Remington that I bought.

Just for the record, my grandson came of age that I got a barrelled action Howa from Brownells, ordered a Hogue stock, my SIL ordered the scope and rail, he added a bipod, the grandson put it all together and off we went.

My oldest granddaughter is a lefty like me, so I found a left handed 243 for her. The youngest hasn't come of age yet, but she is not forgotten.

My Daughter is very petite, maybe 5'2, very small frame. I found a Rem 700 classic in 250 Savage. Low recoil, very accurate. Restocked with a cut down factory 700 BDL stock. Never had a deer tote it off.

skipglo said:
Measure the length from the crook of her elbow ( inside of arm) to her first knuckle on her bent trigger finger- firing position .....you will be incredibly close to what's required!
Click to expand...

This isn't necessarily true, when measuring my wife, hers is almost the same as mine, I'm 5'11" and she is 5'4". She has longer forearms in relation to her body. 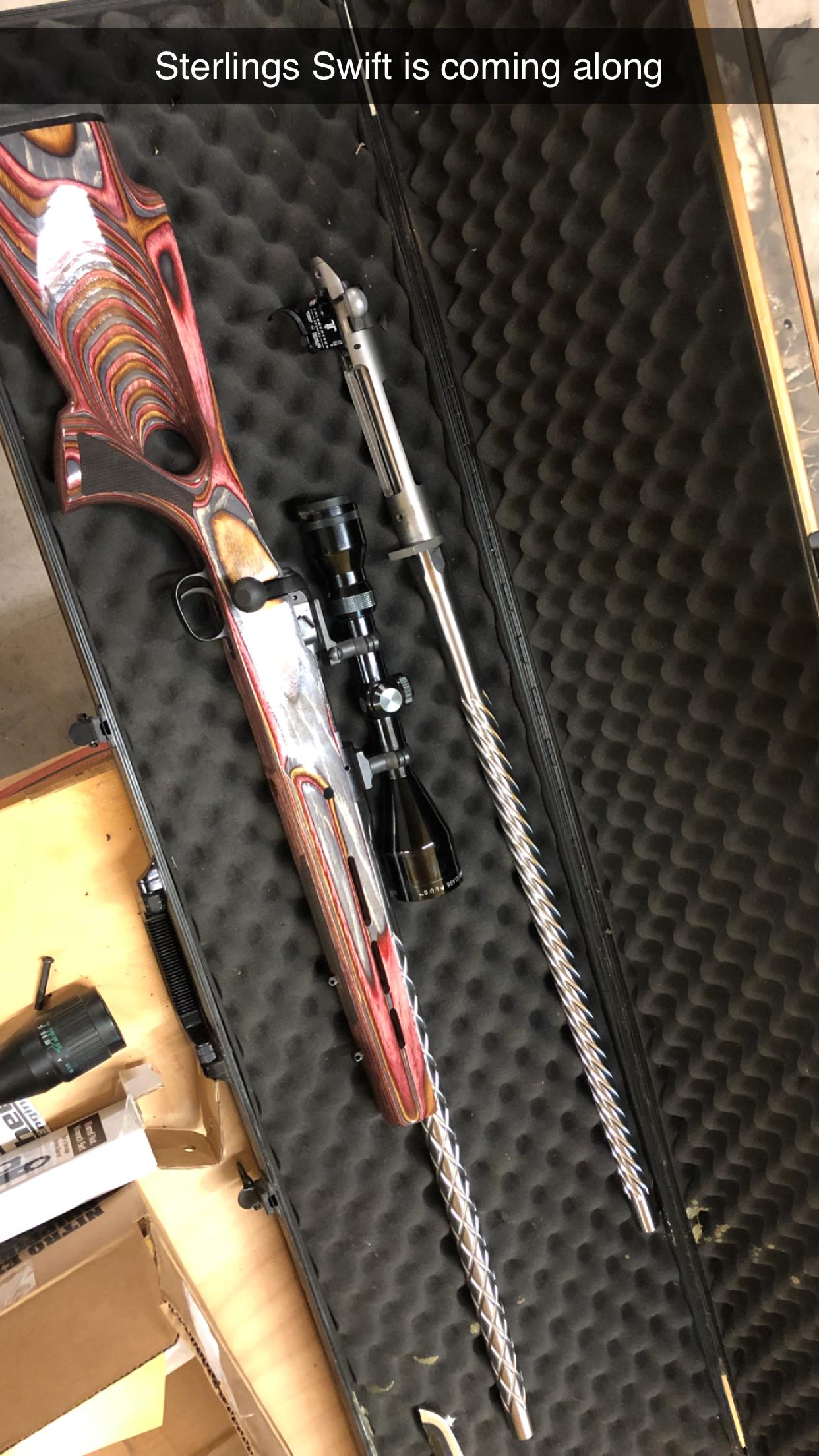 codyadams said:
This isn't necessarily true, when measuring my wife, hers is almost the same as mine, I'm 5'11" and she is 5'4". She has longer forearms in relation to her body.
Click to expand...

I used that technique as a ball-parking to get me close, and then fine tuned from there. It worked that time, but given the range of differences in gender physiques it wouldn't surprise me if it were less successful overall with women.

ntsqd said:
I used that technique as a ball-parking to get me close, and then fine tuned from there. It worked that time, but given the range of differences in gender physiques it wouldn't surprise me if it were less successful overall with women.
Click to expand...

Women in general are mysterious, sometimes confusing, and often misunderstood beings, that we, as simple minded men, may never fully understand. Still, the journey to understanding must go on, it is in human nature to seek understanding!! Ha ha

In reality, that is what I started off trying, I was trying to "teach" my wife about fitting a rifle, and showed her how, when putting the butt of the stock in the crook of my elbow, my trigger finger reached perfectly on my standard LOP Manners EH-1. Then I had her try to show her why this stock didn't fit her.....and low and behold, her finger placement was nearly identical to mine, even though she is 7" shorter than me. There was a moment of silence as I observed, a slight amount of confusion, and a very small amount of regret when I realized I would have to admit to my wife I did not expect that, nor had I seen it before ha ha, the "all knowing" husband didn't know! Ha ha

She did agree though, that a "standard" LOP is simply too long, especially in some compromising field positions, she couldn't get behind the rifle properly. I had her get behind some other guns with 12.75, 12.5, and 11.75" LOP, and we decided 12.5 was perfect for her.
You must log in or register to reply here.
Share:
Reddit Pinterest Tumblr WhatsApp Email Link