I've tried a lot of different chemicals over the years to get rid of carbon deposits in barrels with out much success. After using said chemical, I would use brake cleaner to clean out the bore. **** thing is, when the patches came out clean after using whatever, in this case "C4 Carbon Remover", running patches soaked in brake cleaner afterwards would have black streaks, when the C4 showed nothing!

My Riflesmith for years has suggested carbon needs 200-300 strokes with bronze brushes using a carbon remover, Kroil, something so the brush is not dry, to loosen and break up the deposits to get rid of it. Nothing is going to "dissolve" a ceramic like slick.

This weekend with my bore scope, I could see a carbon ring, along with carbon in the lands for a few inches, which I suspected was giving me erratic pressure problems while doing load development this past week on a particular rifle.

I've done this several times and hate the process. A squirt down the bore through the bore guide and soak the bronze brush with C4 carbon remover, for 15-20 strokes and then patch, had just a hint of carbon residue on a patch after brushing.

So in the last week, I've done this to three barrels that had excessive carbon deposits. Did them using brake cleaner with "several" bronze brushes. Saw Immediate results using the brake cleaner. Running a patch through after brushing came out completely black. It took about an hour of brushing, but eventually the patches came out clean and the bore is bright/shiny and squeaky clean.

At first, I thought this was too good to be true, and maybe there was a chemical reaction with the bronze brush, brake cleaner and stainless steel causing the black residue and nothing to do with carbon removal.

Anyway, I thought I'd pass this on.

you need to clean every session with a CARBON REMOVING step....so you so you do not get a ring or build up. pretty simple.
do not be the cause of the problem.
the best I have found were automotive top engine cleaners. TEC. mercury outboards product maybe the only one left. out side of that family I have recently tried CLR and it seems to work.

if you use a Dewey coated rod, the brake cleaner will show black on the second patch. I don't think the coating likes the solvent.
N

I Thought about that too because I use a Dewey coated rod, maybe the brake cleaner wasn't friendly to the coating? So I tried a non coated "Pro Shot" stainless rod and got the same results; brushing with a bronze brush and brake cleaner produced a lot of black crud.

I'm just saying, here we all are looking for the magic formula for carbon removal, and it appears just simple brake cleaner is doing a job on it.. Sounds too easy?
H

C4 has worked for me. The eliminator usually does it, but sometimes I use just C4 and a bronze brush. Verified by borescope.

Is the brake cleaner you are using a "non-chlorinated" product? I have been told that the chlorinated ones can damage your stock and action bedding and certain triggers if the compound is allowed to drain into that area.

I've been using C4 Carbon Remover lately for my initial bore cleaning after shooting, seems to work pretty good for removing fouling. However, when the C4 patches come out clean and I then use brake cleaner to remove the C4 from the bore, that patch soaked with brake cleaner and I short stroke in the bore, the patch comes out black. That's telling me that the C4 isn't cutting it and the brake cleaner is..

Did you use Seafoam with a bronze brush?
R

I just patch and soak the neck/throat area seafoam/TEC/clr.
brushes are for people that do not believe in better living thru better chemestry
C

I played around a while back and slowly rotating a Penetrating oil soaked brush in the throat area with a drill knocked the carbon rings out of mine. They weren’t built up to the point of causing problems but I bought a borescope and found them. I’m using seamour brand but pb blaster works just as good. There was another thread a while back that I ran across the penetrating oil idea from. It’s a lot less elbow grease and even worked in one with a nylon brush. I’ll be using those going forward for it I think. I let a soaked patch sit in the throat for 20-30 minutes and then take to it with the drill and brush. 20 seconds or so at a time then patch out and check with the borescope.

I use foam bore cleaners and my bore scope doesn't show any carbon. You might have to hit it twice but it removes the all the copper and carbon without any brushing.

Below a 1943 British .303 Enfield rifle with a worn and frosted bore. The foam was applied and the rifle sat overnight letting the foam work.

Below a AR15 and one shot of foam bore cleaner.

And below only a patch was used for final cleanup, meaning no bore brushes.

Try some foam bore cleaner and let us know how it works for you with copper and carbon. 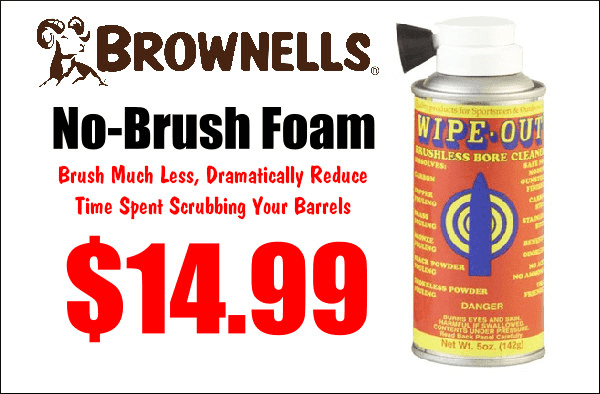 I use bore tech and have no issue getting the carbon out of severely fouled barrels. It takes time and some work for sure but once you get that crap out of there then clean your rifle more often for Carbon. I used to let mine go for a long time but cannot do that any more, especially running a can. I now clean carbon out every 50 or after a match, and on my canned rifles I clean carbon every 20 or so. Lately I've tested the clean bore shot and found I had no issue with a good load keeping that 1st round in the group and have avoided the ring.
D

The CRC brakleen isn't friendly to stock coatings or plastics and tells you to use with good ventilation , it's not so good for you either . Please read the labeling on all of your chemicals and use them appropriately . The red label is for home users and the green label is for industrial users .
Share:
Reddit Pinterest Tumblr WhatsApp Email Share Link