Ok, I am new to long range shooting. I have been hunting for years with a .270 bolt gun but never had a shot at more than 150yds. In the past year I purchased my first GAP rifle, the Rock model in .308Win. It will shoot under an inch at 200yds, even with me behind the trigger! What an amazing rifle.

My question is this, in the field, what does a bubble level do for you other than the obvious, keep your reticle level? Maybe the better question is what are the adverse effects of a canted reticle?

I am wanting to try long range hunting but even at that I can't see myself hunting beyond 400yds, I'm just not that good.

Thanks in advance.
M

Assuming your reticle is aligned with the center of your bore (many are not) canting your reticle would be the same as canting your bullet's fight path. Your bullet travels upward when it leaves the muzzle, to meat the zero point of your line of sight. If you cant the rilfe lets say to the left, the bullet leaves the bore, rising to the left and your POI will be left of your POA.

Bubble levels aren't perfect instruments but IMO they are a whole lot better than nothing. Since I started using one it has really opened my eyes to how much cant I would sometimes put into the rifle when trying to eyeball a level when there isn't a level horizon as a reference.

IMO, a bubble level is critical for LR hunting.

Welcome to LRH and good shooting,

Bubble levels keep the sights elevation axis in the true vertical and the rifle's not canted. The amount a bullet will strike away from the aiming point horizontally is easy to calculate.

Multiply bullet drop in inches at target range by the sine of the cant angle.

There's virtually no change vertically as the cosine functions to show that end up with only a few inches difference for most situations. For the .321 Mag. example at 1000 yards above, a 10 degree cant will cause a 52 inch wide shot horizontally, but it would be only 5 inches lower.

Competitive rifle shooters have used bubble levels on their aperture front sights for years to ensure the rifle's not canted. There are some available for scopes, but they're hard to use as they stick up too far atop the tube. I'm not aware of any scope that has an internal one although such things have been suggested to scope makers.

Here's a picture of one on a .308 Win. match rifle and another showing what a bullseye target looks like through one. A small level's put on the rear sight's windage arm, leveled, then the muzzle band's loosened, turned to level the front sight bubble, then tightened. One can calibrate how much cant's needed to move impact one MOA at any range. I've done that in competition to make small windage corrections without coming out of position to turn the sight knobs. 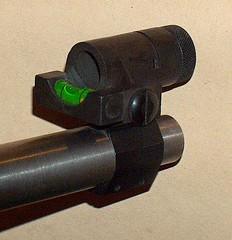 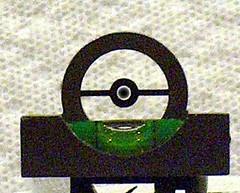 Wow, a little goes a long way. Can you recommend a good bubble level? I am using Badger rings/bases and looking through a Leupold Mk 4 LR/T 65.x20.

Also, what is this angle cosine stuff I am seeing? Us rednecks just out in our stands shooitng whitetail don't know much about these here acoutrements.

The neatest scope ever was Springfield Armory with an internal level. I haven't seen any for quite some time. They must have been too costly to make. lightbulb
B

Here's some links to external ones.

It would be easy to put a small one at the bottom of the reticule plane in scopes. The bubble could easily be seen at the bottom of the field of view. It might be a bit out of focus, but who cares as long as it could be seen. And it would be totally internal; free from external bad stuff. Redfield, Weaver and Leupold liked the idea when I mentioned this to them years ago.
Last edited: Feb 12, 2010
B

ergceo said:
Also, what is this angle cosine stuff I am seeing? Us rednecks just out in our stands shooitng whitetail don't know much about these here acoutrements.
Click to expand...

Look at the end of the minute hand on a clock when it's midnight. Let's assume the hand is 6 inches long. The tip of the hand is straight up; not canted. Bullet drop is from the tip of that minute hand where our imaginary barrel's pointed to the clock center where its shaft is that turns it which is our target center or aiming point; 6 inches straight down.

Now we'll "cant" that minute had and in five minutes it's pointed at the number "1." It's now canted 30 degrees; quite a ways for a rifle but the theory and reality's still the same. The bullet will drop just as much, or 6 inches, so it drops from the tip of the minute hand down the same distance it did at midnight when it was at 12. Now the bullet strikes to the right and somewhat low with our aiming point at the same place.

Pop said:
I decided on this.

Sinclair offers an anti cant device that I use out in the South Dakota coulee country.
gun)
Nice product.
It mounts right on your scope.
The newer model locates the bubble so that it rests on the side of the scope.

Midway has the same one available.
M

Bearhyde said:
Sinclair offers an anti cant device that I use out in the South Dakota coulee country.
gun)
Nice product.
It mounts right on your scope.
The newer model locates the bubble so that it rests on the side of the scope.

Midway has the same one available.
Click to expand...

This is a good one and also priced very well.. I have on several of my rifles.
B SQUARE : BUBBLE LEVEL - World's Largest Supplier of Firearm Accessories, Gun Parts and Gunsmithing Tools
E

Bearhyde said:
Sinclair offers an anti cant device that I use out in the South Dakota coulee country.
gun)
Nice product.
It mounts right on your scope.
The newer model locates the bubble so that it rests on the side of the scope.

Midway has the same one available.
Click to expand...


I bought one of these and I think they are great but for the life of me I can't figure why some one thought it is better to put the bolts in from the bottom.
some times things needs comon sense too.
Share:
Reddit Pinterest Tumblr WhatsApp Email Share Link