I set up a target at 60m and started with a clean barrel shot some rounds at it. The speeds chronographed were 3110 fps.

I used 2 different aiming points on the target the first 6 went to the right, the last 6 went above and shots 9 and 12 went astray. 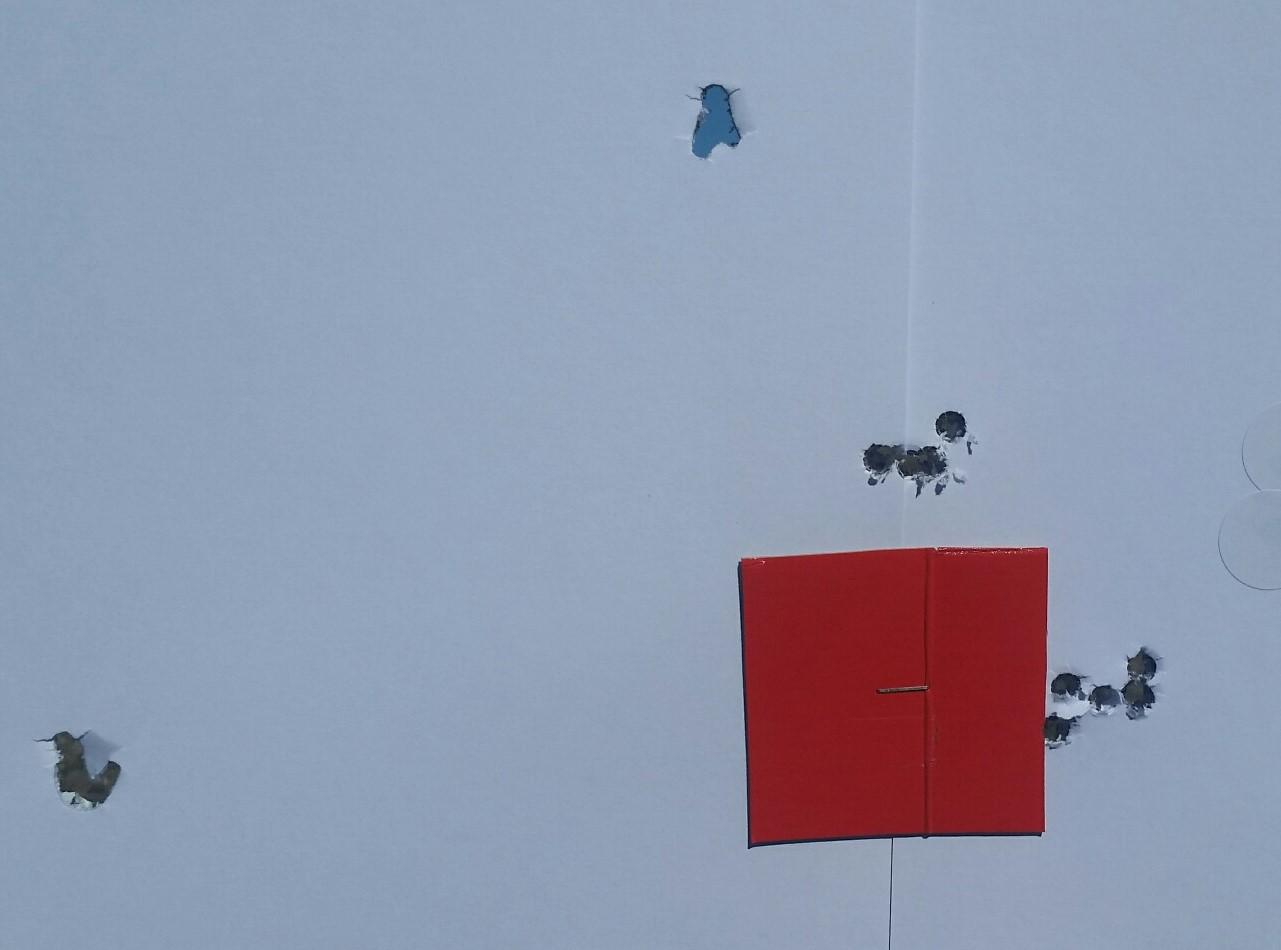 Anyone else seen this sort of thing?

That velocity isn't fast enough to be causing them to shed jackets in mid-flight. I think testing showed them ok up to around 3,300 FPS...Maybe more?

Could be a barrel issue, though... Barrel could have some manufacturing defects causing extreme jacket & core deformation, which could cause shedding in mid-flight... I'd have a smith scope the bore and check it out.
W

Whoever supplied the barrel should replace it, they don't want their name on that one.

Check base & rings for proper torque and no slippage/movement?

Check scope for issues? Swap scope from another rifle and reshoot?

A little rifle/scope information could be helpful.

How much copper is in that barrel now. It looks like the more you shoot(dirty) the worse it is. Needs to be checked with bore scope as mentioned.

Berger has seen bullets not making it to the berm ,in testing with 6.5 bullets. They made the jackets thicker.

I set up a target at 60m and started with a clean barrel shot some rounds at it. The speeds chronographed were 3110 fps.

I used 2 different aiming points on the target the first 6 went to the right, the last 6 went above and shots 9 and 12 went astray.
View attachment 102799

Anyone else seen this sort of thing?

There seem to be a lot of people with 28 Noslers having this issue.

So I going to cut & paste what I posted in another thread for a guy that was seeing the same issues with a 28 Nosler shooting 180 gr. ELD-Ms.

I ran into this with numerous bullets on my 7mm RUM.

Interestingly they hold together initially. I have never experienced any barrel get as hot as quickly as those on a 7mm RUM. This is heavy varmint profile .9" diameter at the muzzle.

By the 3rd shot, taking my time, the barrel is hot. Not enough to burn your hand, but you can't hold it comfortably for more than a few seconds.

Usually by shot 4 or 5 the bullet will now impact the target or berm sideways. This I can only assume is due to the heat in the barrel is causing the jacket to heat up on the way down the tube and blow at least part of the jacket off once it hits the air at the end of the muzzle.

I have tested a LOT of bullets found that unless it's a solid or a bonded bullet like a partition they do NOT hold up at velocities above 3,300 -3,400 + FPS and the above twist rates.

Even going to the 40gr. VMAX at 4,800 FPS, I do not experience jacket separation.

Bottom line, with longer barrels, the 28 Nosler is probably able, and the 7mm RUM and 7mm AM are definitely able, to drive many bullets at speeds past their design limitations.

Most 7mms don't come in factory twist rates faster than 1-9, therefore manufacturers have not been exposed to this.

The likely cause is that some 7mm bullets have jackets that are too thin to go down pipe with a twist rate faster than 1-9 at speeds above 3,200 FPS.

Theotherdave said:
The likely cause is that some 7mm bullets have jackets that are too thin to go down pipe with a twist rate faster than 1-9 at speeds above 3,200 FPS.
Click to expand...

When I get some loaded up for my 7mm Weatherby I’ll chime in and let you know what I find.

From another 28 Nosler thread that had a bad chambering job;
https://www.longrangehunting.com/threads/28-nosler-pressure-and-fouling.205092/page-2


--------------------------------------------
Thank's for the info and advice everyone. I took it to someone with a 90° bore scope today and found out what the problem is. It appears like x-caliber used a rougher reamer and never put the finishing reamer in the chamber, so I have a 90° angle from my freebore to my lands. This explains my pressure problems and the copper fouling... it was probably sheering off half the jacket!!!! No wonder it fouled in one shot. I ordered a reamer from PTG today and will finish the chamber when my reamer gets here
Share:
Reddit Pinterest Tumblr WhatsApp Email Share Link