Wow Moose I sure hope you get your rifle shooting good. I have the same rifle in 6.5 CM and I am totally pleased with it I have a Mueller 8-32X scope on it. My last outing I was shooting at 200 yards and put 4 rounds into a .392" group and then my 5th shot opened it up to .75". Even with the "flyer" that boils down to a about a .4 MOA rifle. And I did nothing to this rifle. Mind you now, although it shot almost everything well, it took about 3 months and several outings with it to find the load it really liked. The only factory ammo I shot out of it was Winchester 125 gr that was IMO junk. I just got it for the brass anyway and to break in the barrel. I'm using that ammo as fouling shots every time I go to the range until I get rid of it.

I’m loading for a friends hmr 300wm. All the factory loads where about 1-2” groups. After about 80 rds it improved some. Now shooting hand loads it’s shooting tight. Threw a cheap brake on it and it helped a bit too 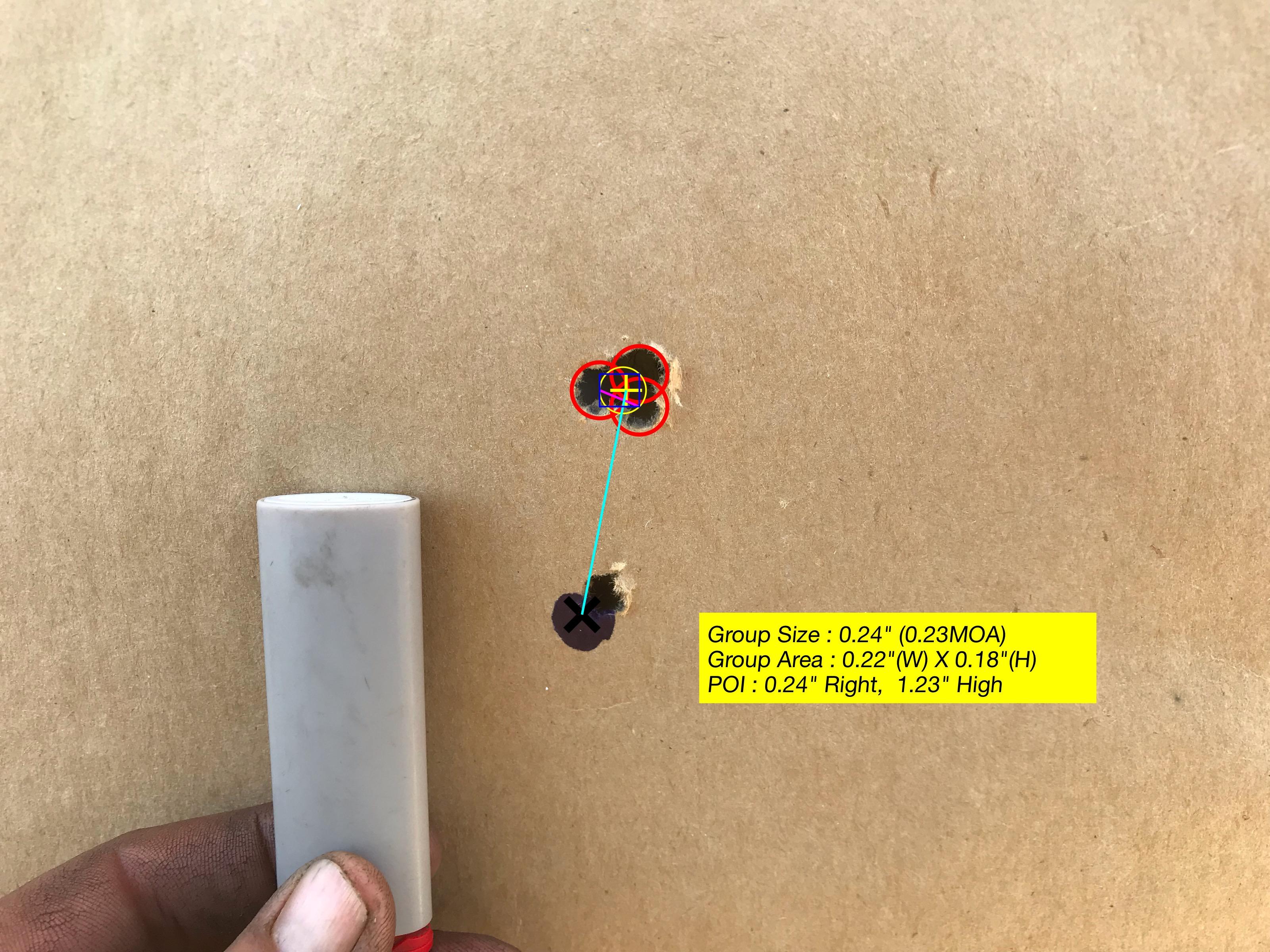 4shot group then dialed back down to confirm zero

I've run into quite a few rifles that were picky about loads and overall poor accuracy.A lot of the time it ended up being the stock or bedding.Sometimes it's really hard to find what the exact problem is.I had an old Remington 700 30-06.I couldn't get it to shoot worth a darn.The stock was all original,hadn't been bedded,but everything seemed to be perfect.I put the barreled action in a stock that I had bedded for another rifle and that thing shot four shots in the same hole.So it was the stock.I recently had been trying to get a couple of Sako a7 rifles to shoot better.I bedded the lugs and tangs on both rifles.About the best they ever shot was about an inch,but most of the time it was more like an 1.5 inches.The barrels were floated on both rifles,so one day at the range I decided to see if they shot any better if the barrel was supported.I folded some paper and slid it under the barrel.I went the whole length of the barrel channel.Both rifles instantly became tack drivers!I contacted Beretta and they offered to send me a replacement stock for one of them the other didn't have a replacement.The one they sent me Had the full length metal bedding block.What I had figured out with these two rifles was,both stocks were composite,no metal bedding block,just metal inserts where the action bolts down.Both these stocks have detachable magazines.Where the stock was inleted for the latch that locks in the magazine,weakened the stock behind the recoil lug.So what was happening when the rifle was fired the action was flexing.By supporting the barrel It was not allowing it to flex.The new stock fixed the problem,the other rifle I did a support bedding and it shoots great now too.They will shot about half an inch with anything I've tried so I'm good with that.So what I've learned is sometimes little things can make a huge difference.Some rifles are easy and shoot well,then some are a real pain to figure out just were the problem really is.

No joy. I called Bergara and plead my case. Jose the rep seemed decent and had a ship label to me in 45 min. I guess the majority of employees are veterans. I hope they treat a fellow vet good! Will keep posted on results.
You must log in or register to reply here.
Share:
Reddit Pinterest Tumblr WhatsApp Email Link