I'd like to start an open minded HEALTHY discussion on barrel contour options - possibly to include carbon and fluting options.

I have several upcoming Sporter builds that I'd like to overthink the contour profiles to optimize the performance for a given weight. One is a Kimber 84M to be chambered in 6.5CM. The others are MRC actions to be 300 PRC. Stocks will be built to fit though too large a diameter profile could be a problem. Looking at light to maybe medium profile. Stocks will be English Walnut think Winchester Supergrade/Jerry Fisher/Echols, etc. style. So slender not a big flat forend.

I've read the test results on carbon vs fluted vs profile to weight, etc. I'll find and post some links. Everything of substance I see shows that barrel weight over other things largely determines performance.

My thoughts are to shape the straight shank length to match the shoulder of the cartridge and do a more aggressive taper to maximize the stiffness for a given weight while not getting too carried away as weight and appearance does matter.

I'd like to try a Bartlein carbon but don't think it can get the wood stock to be right with that large a profile. I'm not really interested in fluting both appearance and past experience with fluted barrels. I don't think fluted gets a performance gained over equal weight tapered. 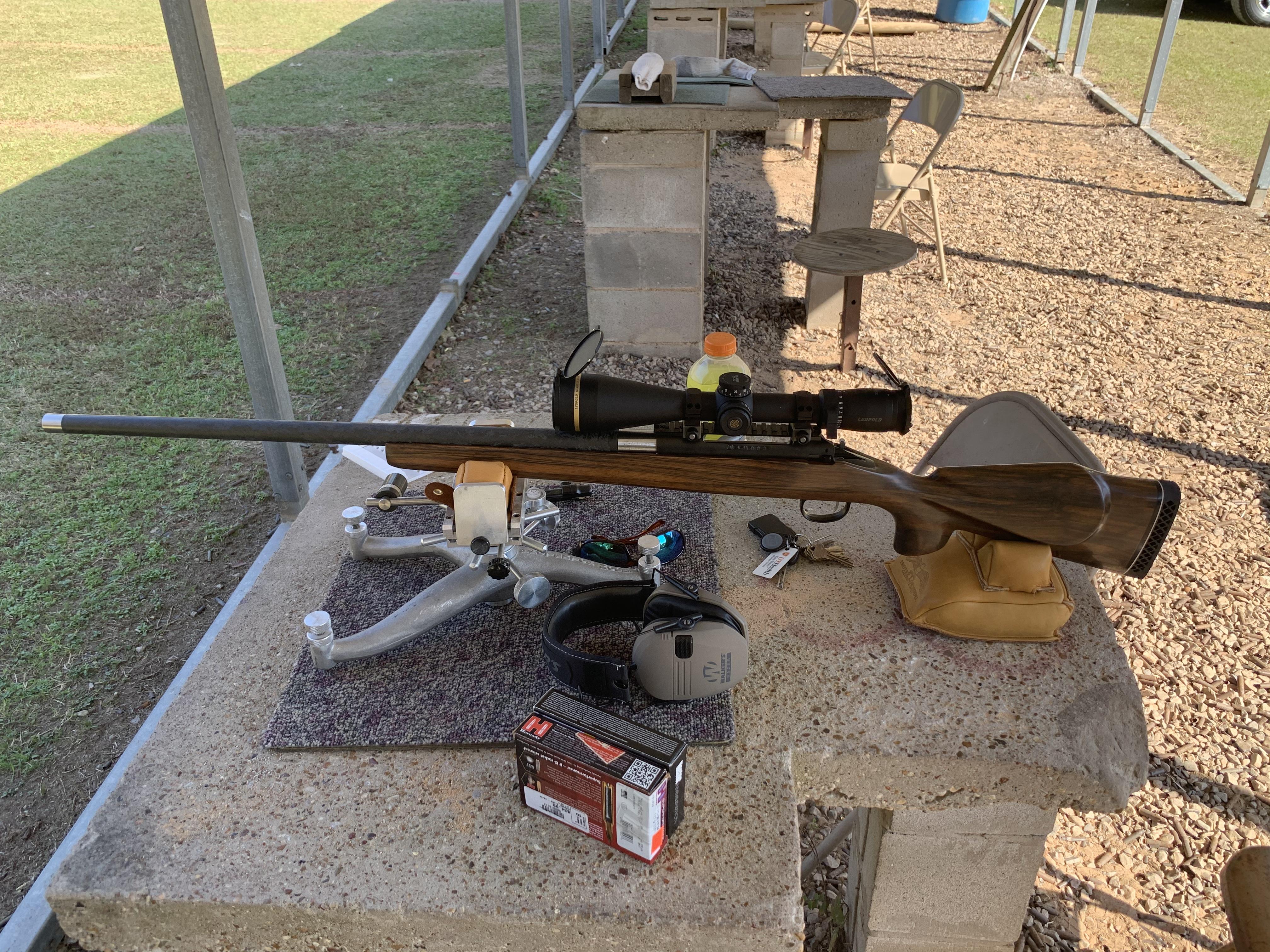 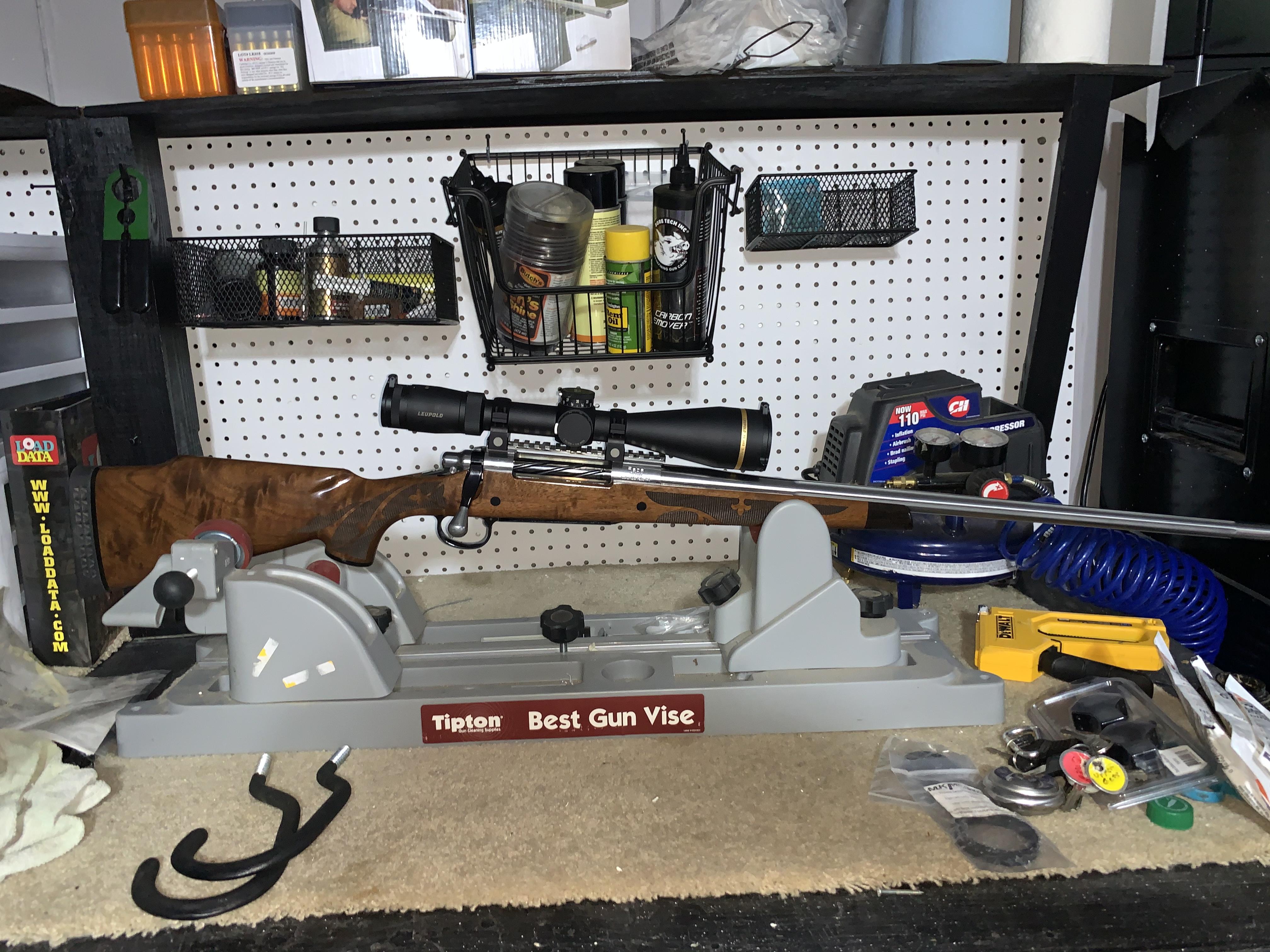 Personally, I lean towards Shilen #4 contour as the largest I want in a 'sporter' weight rifle. That contour is very close to what I would call "magnum" contour. Ends up at .650 to .675 at the muzzle. I use the Shilen contour just as an example. All of the barrel makers will contour a blank that ends up with the muzzle diameter within that .650 to .675 number. On my personal "sporter weight", wood stocked hunting rifles I usually go no smaller than .600-.625 at the muzzle.
J

I noticed two things about your post
"...optimize the performance for a given weight."
"...shows that barrel weight over other things largely determines performance."

I tend to focus on rigidity as the main point of discussion. The sinusoidal movement of the barrel is what makes the accuracy node. A lower amplitude is a stiffer barrel but accuracy can still be obtained on a flexible barrel as long as the ammo is tuned or a barrel tuner installed.
If limiting weight is the goal of performance, I found a fluted #2 (0.60" muzzle) is just as rigid but slightly lighter than a #1. That was based on fluting depths I see manufactures publish. However, fluted contours larger than #2 are less rigid and heavier than the next size down unfluted. Then there is the fact that it may be difficult to find a barrel manufacturer that will flute a contour less than a #3 (~0.63). Weatherby has a fluted barrel that has a muzzle diameter of 0.575" and its very light.

If the barrel is going to be threaded, then the minimum muzzle diameter for threading and an appropriate shoulder abutment must be considered. Thunder Beast recommends a minimum 0.60" muzzle diameter with 1/2" threads. I personally don't like the threaded barrels that are flared out at the muzzle to provide a larger shoulder abutment. They don't look right to me (since the OP mentioned looks count).

A gunsmithing book I have states, that the straight shank of the barrel should extend to the cartridge shoulder. However, there are many examples of factory guns, including Rem 700, that start the radius at the recoil lug. I'd like to find some more technical information on that considering it doesn't appear to be "required" for strength. For rigidity, the more shank the barrel has, the stiffer it will be. Stiffness closer to the receiver has move value from a mechanics and materials perspective. I have not seen or heard of anyone testing shank profiles for accuracy. It my not matter if the barrel tapers quickly.

For hunting guns, I think this discussion is a valuable one. For competition, not sure it matters as they are all heavy. POI shifts from a heated barrel also matter. Stiffness and mass both help with that.
T

jpndave said:
I have several upcoming Sporter builds that I'd like to overthink the contour profiles to optimize the performance for a given weight.
Click to expand...

What "performance" are you referring to for optimization?

Cold bore, second- even third shot accuracy is not a function of barrel contour. A skinny stick can shoot just as accurately as a telephone pole for the first few shots.
For a hunting rifle, muzzle diameter should be considered as mentioned above if a muzzle device is going to be used. Minimize length/weight to the extent you can still achieve the MV desired.

I don’t know if I add much to this discussion, but I did look at contours, materials etc on a couple rifles this year, buying 2 blanks.

the first one I wanted heavy then looking at some truck axle barrels, I can see how the weight gets away from you. I ended up with a Rem Varmint. It puts the weight towards the action while being reasonably heavy. Frankly the rifle came in a touch light which is ok. A #5 or medium Palma may have been better, but I’m happy I can carry it.

Next i was picking out a hunting rifle barrel. I really like a Winchester 70 rifle shape. I went with a Brux #3 which will be heavy enough to recut the barrel channel of a Win 70 stock to a nice fit. I think I’m at 9 lbs scoped. Great! I was thinking 8.5! I still need the rifle to come back to be sure. I thought a #4 might be nice for a touch heavier rifle, but a #2 was too thin.

As to fluting, it sounds cool, but is big money and generally I’d considered performance neutral or negative. I think I get more varying shank length and shank diameter.

shortgrass said:
Personally, I lean towards Shilen #4 contour as the largest I want in a 'sporter' weight rifle. That contour is very close to what I would call "magnum" contour. Ends up at .650 to .675 at the muzzle. I use the Shilen contour just as an example. All of the barrel makers will contour a blank that ends up with the muzzle diameter within that .650 to .675 number. On my personal "sporter weight", wood stocked hunting rifles I usually go no smaller than .600-.625 at the muzzle.
Click to expand...

A light contour barrel may shoot as well as a heavier one, problem is its like watching paint dry between shots and that is tedious for me. Anything under .600 at muzzle for me is too light. My hunting rifle is .615 at muzzle and at 20" not heavy at all to carry.
W

My wife has a stock 7mmRM her dad bought her a year before he passed away.
It’s a synthetic ADL.
It’s crazy accurate even with factory Hornady, until the fourth rapid fire round. Then there is an extreme flyer, usually high an to the right.
I lapped the barrel as soon as she got it and worked on the chamber with emery cloth because the brass was coming out with scratches.
I’m saying all this because if it’s a hunting rifle and if someone has fired more than three shots rapidly, in a hunting situation; maybe they should worry more about their skills and such. Instead of a barrel heating up during a hunting situation.
Jmtcw
Wow are them some nice picks of wood and carbon together or what!!!