Very nice buck Cody, good job and thank you for the report.

Not my buck unfortunately ha ha, but a family member using the .270 Sherman my cousin and I put together. This rifle is stacking the critters this year!!

Man, just went through the last couple pages of this thread and realized I forgot to update the other work this 140 SBDII has done at the hands of my cousin's wife!! Well here we go.....

Her first high country mulie, shot at 360 yards, hit back of lungs/liver, hit the dirt at impact, got back up and stumbled 75 yards and tipped back over dead. Main exit was half dollar sized, with 2 or 3 other small petals that fragmented and exited rib cage, lungs and liver were mush. On a side note, @Bravo 4 thanks for coming along on this pack out!! 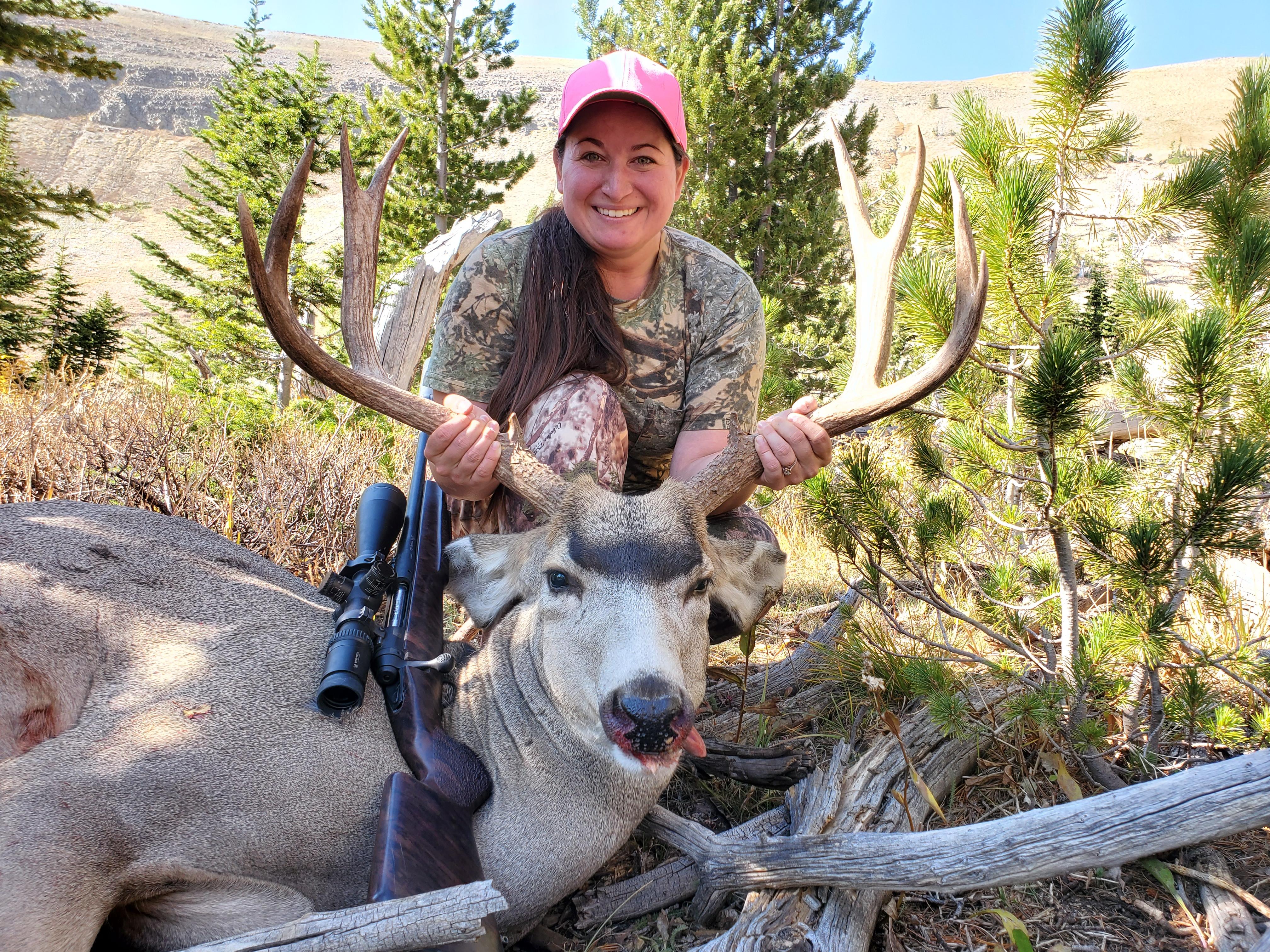 This one was hard earned!!

She had picked this buck out, and hunted him 4 or 5 times and he got the better of them every time, slipping out a drainage, moving while they were stalking in, and so on....until he didn't! They managed to get within about 500 yards, and she made a perfect shot on this guy. It looks like there was a bunch of bloodshot, but all of this scraped off the rib meat as it was just in the membrane, the meat was still salvageable pretty much right up to the half dollar sized exit. This bullet is proving to be very consistent and repeatable so far!! 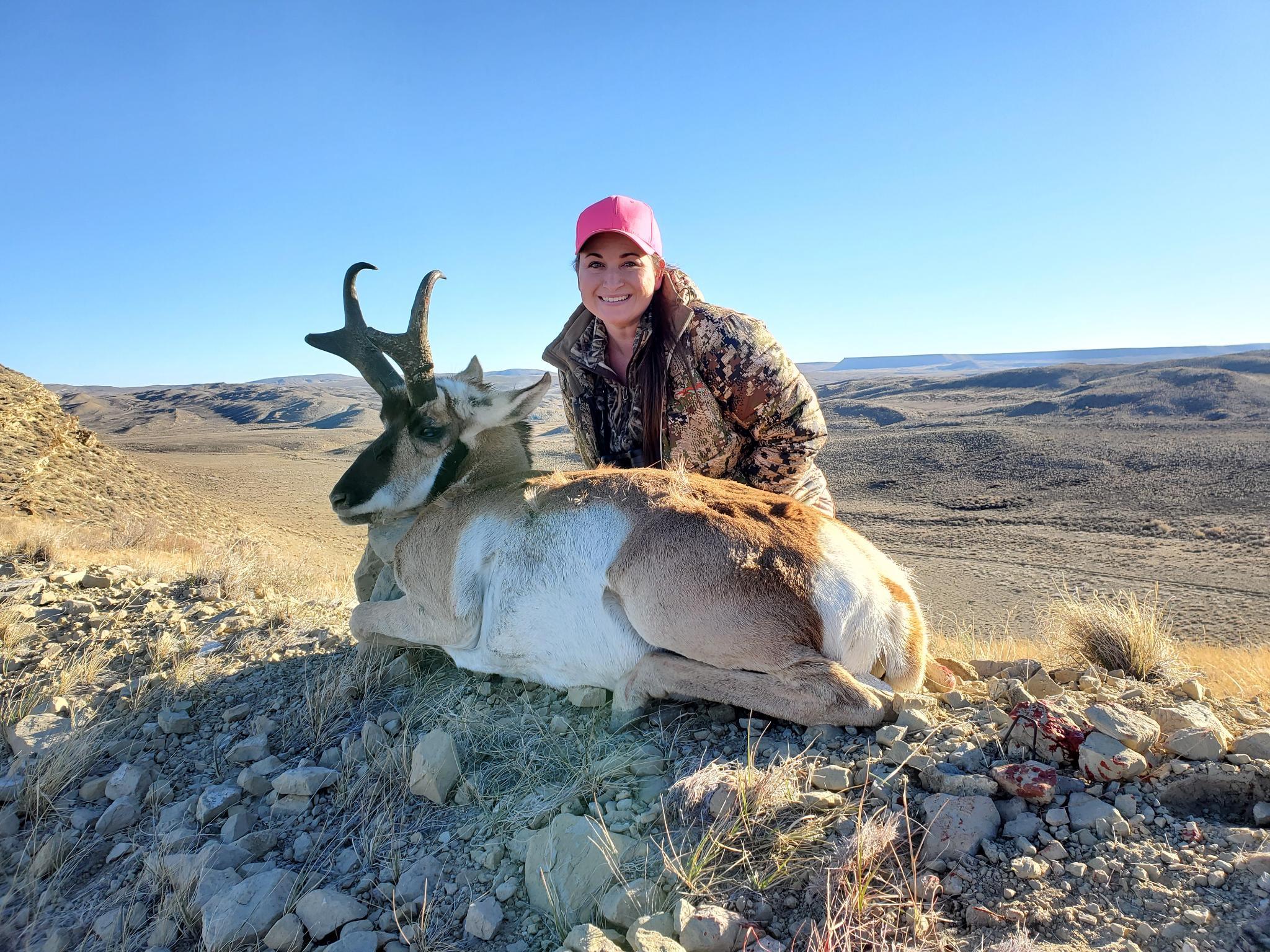 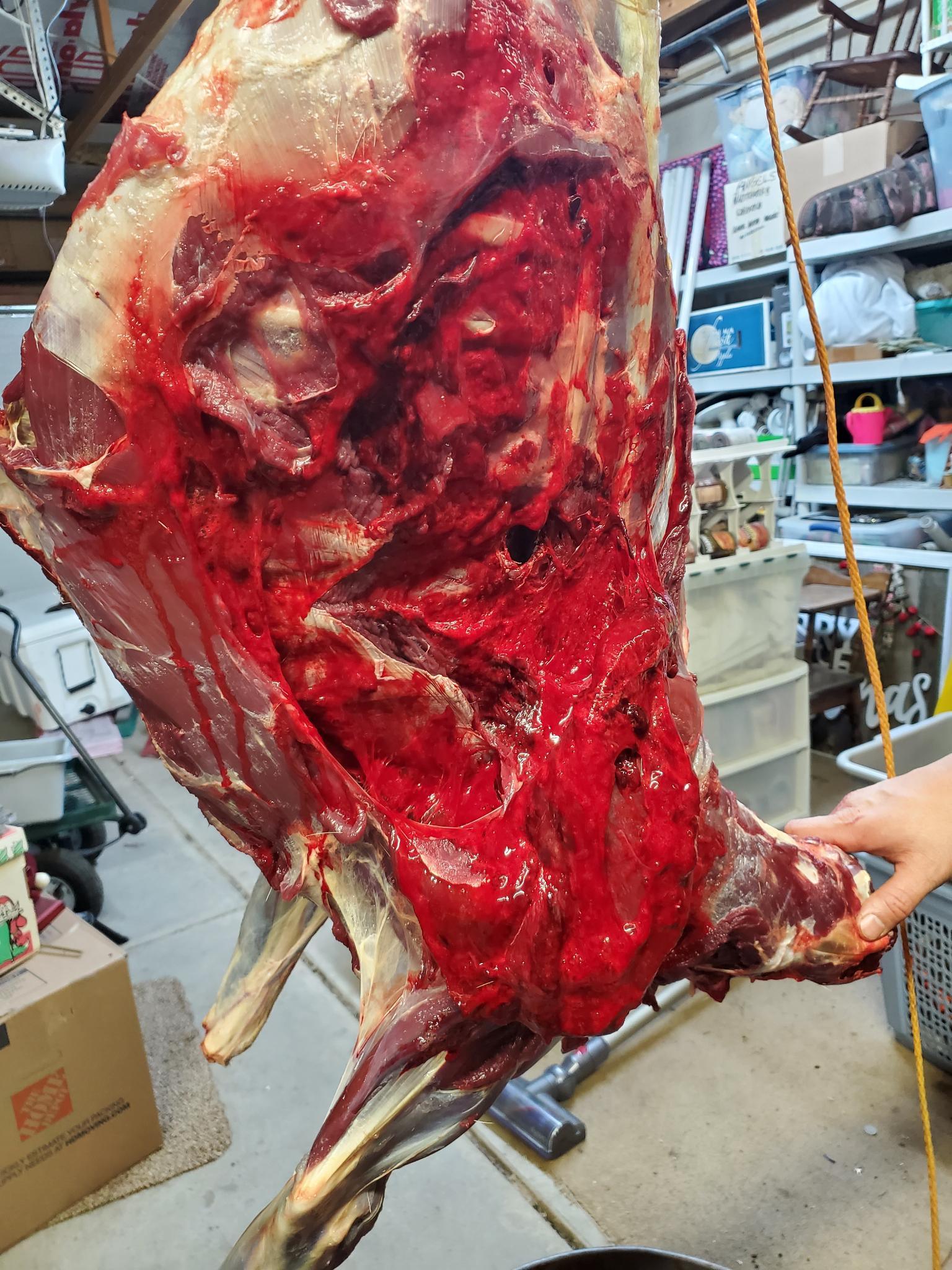 And finally, her first elk!

This cow was shot at around 330 yards. She was in a sitting position on a tripod for the shot, and got a little excited as the elk were moving out. She pulled her shot forward just into the neck barely out of the chest cavity, centered up between the spine and esophagus through dense meat, and just missed the jugular artery. The bullet went in and out, the cow took off running but left a heavy and constant blood trail. She ran about 3/4 of a mile and died. 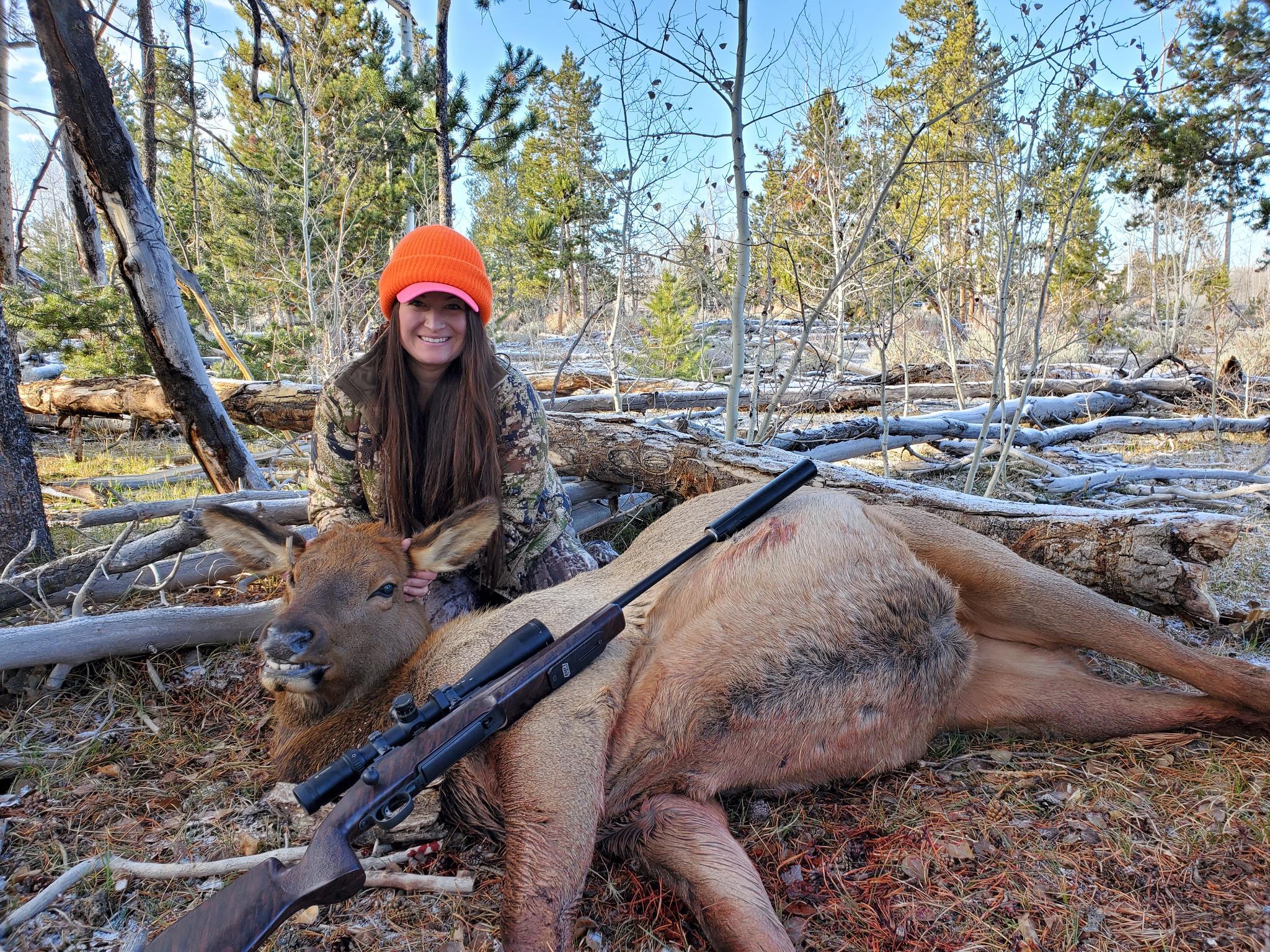 I find this last shot interesting, as the impact is within a couple inches of where I shot my elk last year, with a very different result. This elk was dead probably within 5 minutes of being shot from blood loss, and this bullet exited. My elk was still alive much longer, and my 270 grain bullet did not exit, though it was a bigger elk and impact velocity was much lower, but still over 2000 fps. Overall, we are liking these gen II bulldozers as much or better than the gen I's, though they do seem more picky with load developement.....but if you get them shooting, they are performing great on game.
Last edited: Nov 30, 2021
P

Thanks for the updates Cody.

We've never experienced that surface splattering and jellied blood in the pic of the mule deer with the original BD bullets yet. Even at closer yardage and with higher velocity impacts.

Our wounds with BD bullets resemble those on your mule deer pics in post 362.

Highlight of my trip Cody! Even if I don’t get any tags next year it would be worth the 1200 mile drive to be another set of eyes for y’all. Horses though, we gotta use horses!

phorwath said:
Thanks for the updates Cody.

We've never experienced that surface splattering and jellied blood in the pic of the mule deer with the original BD bullets yet. Even at closer yardage and with higher velocity impacts.

Our wounds with BD bullets resemble those on your mule deer pics in post 362.
Click to expand...

Ya, we have been seeing some jellied blood, and more damage internally, but only in the membrane on the rib cage, not the meat, so it scrapes right off, and doesn't affect the meat much. These gen 2 bullets seem to be having more fragments or nose petals creating secondary wounds, I like it much better for my uses, this year most of the animals were closer with the .270 Sherman, but our average range is usually 500+, so a bullet that opens up a little more is much better, and even at close range, though it looks worse, actually isn't really damaging any more meat. Maybe next year we will get some farther impacts!

Bravo 4 said:
Highlight of my trip Cody! Even if I don’t get any tags next year it would be worth the 1200 mile drive to be another set of eyes for y’all. Horses though, we gotta use horses!

That's awesome, glad you enjoyed it! Once we have the dates of our hunts, I'll make sure and let ya know!

I was hoping to test the 150’s last weekend but stuck out, hopefully I’ll have something to report next weekend
N

Shot 2 deer on Saturday with the 7 Allen and the 150 BD-2's. Both were almost broadside. First doe was at 300 yd. Lung shot. Two petals came out the front of the deer through the brisket. (90 deg from shot angle) Part of it seemed to bust straight through - likely the shank. Lungs were gone, and...

I was going to order some of these to try, but with the news on one of the guys who makes them probably not being able to do that anymore.... are they going to be in business much longer?

I believe he is/was the Chief Operations Officer, not the CEO.

Ya, that's what I was referring to.

George and his wife are the main owner/s and CEO. Not sure if he had part ownership, and how that is going to play out for the business. I'll try to contact him and get his thoughts on the business, if he will speak on it.
N

I'm so sorry to hear this. We all mess up sometimes, but this is not a light matter. I hope things can continue on. I've spoken to Jason recently but not George. Nothing was mentioned about possible changes on the horizon. @codyadams let us know if you hear anything relevant.
Share:
Reddit Pinterest Tumblr WhatsApp Email Share Link