Well guys, wanted to share this report on this rifle with you on my new APS XHS Ultralight rifle design. I have made these in the past but decided to change up a few things and also some new tech has become available that helps out.

generally the goal of these rifles i have made in the past was to meet the sub 16 lb Idaho big game hunting rifle weight limit. As such, we usually looked for around a 13-14 lb bare rifle weight design. This customer wanted to get extreme and try to get 12 lbs bare rifle weight.

here is a pic of the finished rifle before i get into the build details and testing report. 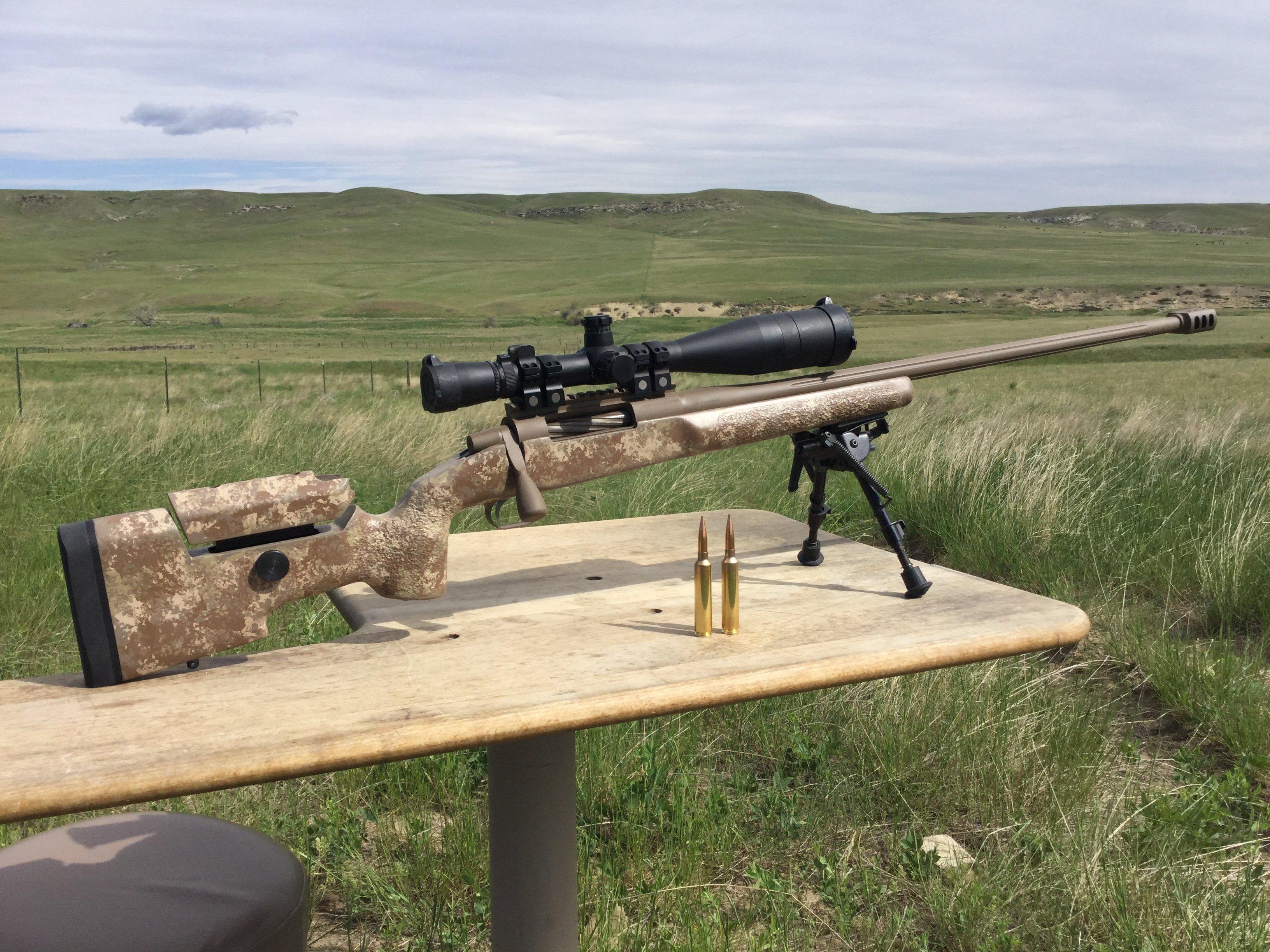 As many of you that know about my XHS rifles will instantly notice, this is a rather short rifle and thats true. This rifle has a 28.75” bartlein barrel. My standard barrel length is 32” on these rifles. Also you will notice that this rifle wears one of my Medium 3 port Painkiller muzzle brakes instead of the standard large 5 port Painkillers. This reduces length and weight rather significantly and still manages to keep recoil quite comfortable.

the other components are standard APS XHS. This is a single shot so went with the BAT CT receiver. We debated going with the 1.470” diameter BAT but i felt with some special attention on the mill, i could take a 1.55” diameter bat and make it even lighter then the 1.470” yet still retaining the advantages of strength and rigidity of the larger diameter receiver.

the Stock is a standard McMillan A5 but made with their Enhanced EDGE tech which uses their carbon fiber shell with heavy sniper fill in critical recoil support areas, and their lightest possible fill in all other areas of the stock. The stock was bedded with aluminum pillars before any of the lightening cuts were taken on the receiver. Then once fully cured, i did do some minor milling on the bedding area of the stock to drop a bit of weight but not much. This area is one i would rather keep the weight and strength as i will explain later. I did however, mill out the majority of the adjustable cheek piece from the bottom side with all cuts being covered by the mounting hardware. In the end, not a single weight lightening effort is visible on this rifle.

A jewell trigger was used and barreled receiver was cerakote finished in coyote tan. 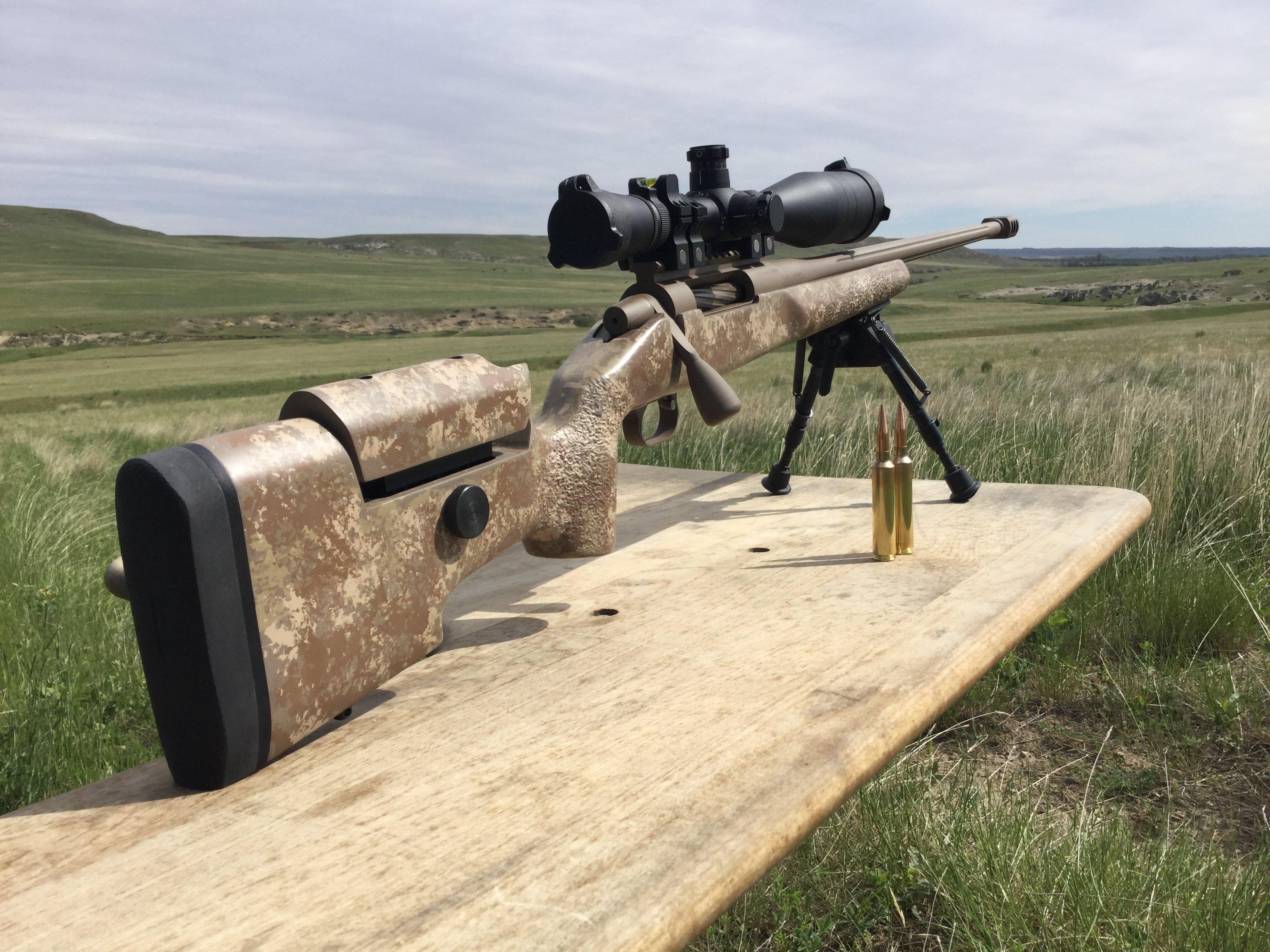 To keep weight down as much as possible and to keep balance as good as possible, we decided to go with a short barrel. I had a very hard time agreeing to a sub 30” barrel but decided to give it a try but was very nervous about the velocity loss in the 338 Allen Magnum. The barrel is a custom contoured Bartlein 5r 9 twist. The shank is 1.350” diameter and then contours down to roughly a sendero contour out to the muzzle with a finish length of 28.75”. Fluted with 6 standard flutes by Bartlein.

Now, for the performance testing. As mentioned, i was a bit nervous what could be done with a round that burns 145 grain class powder charges in a 28.75” barrel length...... The Berger 300 gr otm is my standard bullet choice, even for big game hunting as its thicker jacket helps control expansion somewhat at the velocity potential of the 338 Allen Magnum. 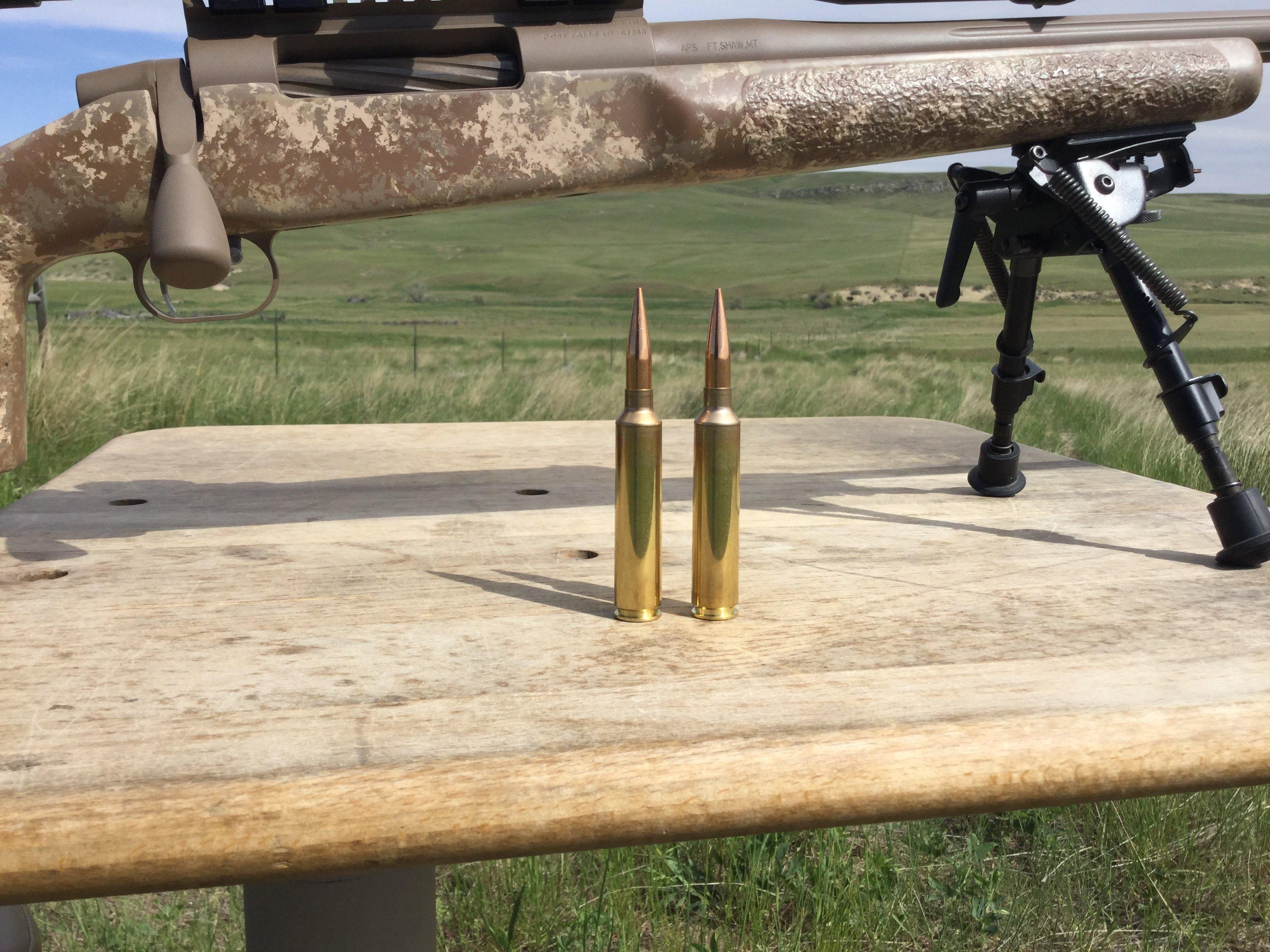 sealing the pressure was performed by the great Peterson brass company using their 375 cheytac brass to form my 338 Allen Magnum cases. RL50 was the powder of choice under the berger and lit with the hot fed-215 primers. Started at a known save level and first loads clocked over 3100 fps with cases falling out of the chamber. This made me happy as i was nervous this would be about the limit of the speed out of this short barrel.....

i continued to work up load level until i hit the first sign of pressure, that being a very slight hitch at the top of the bolt throat which is common with the BAT and these big wildcats anyway and an ejector ring just showing up a bit shiny. This was at 145.0 grains and 3340 fps!!!

as is normal. I took one full grain off this level and called that my test load. This was 144.0 gr which averaged 3315 fps. Extremely happy with this level of performance, in fact simply amazed.

so loaded up a batch of ammo at this load and this morning headed out to the range. 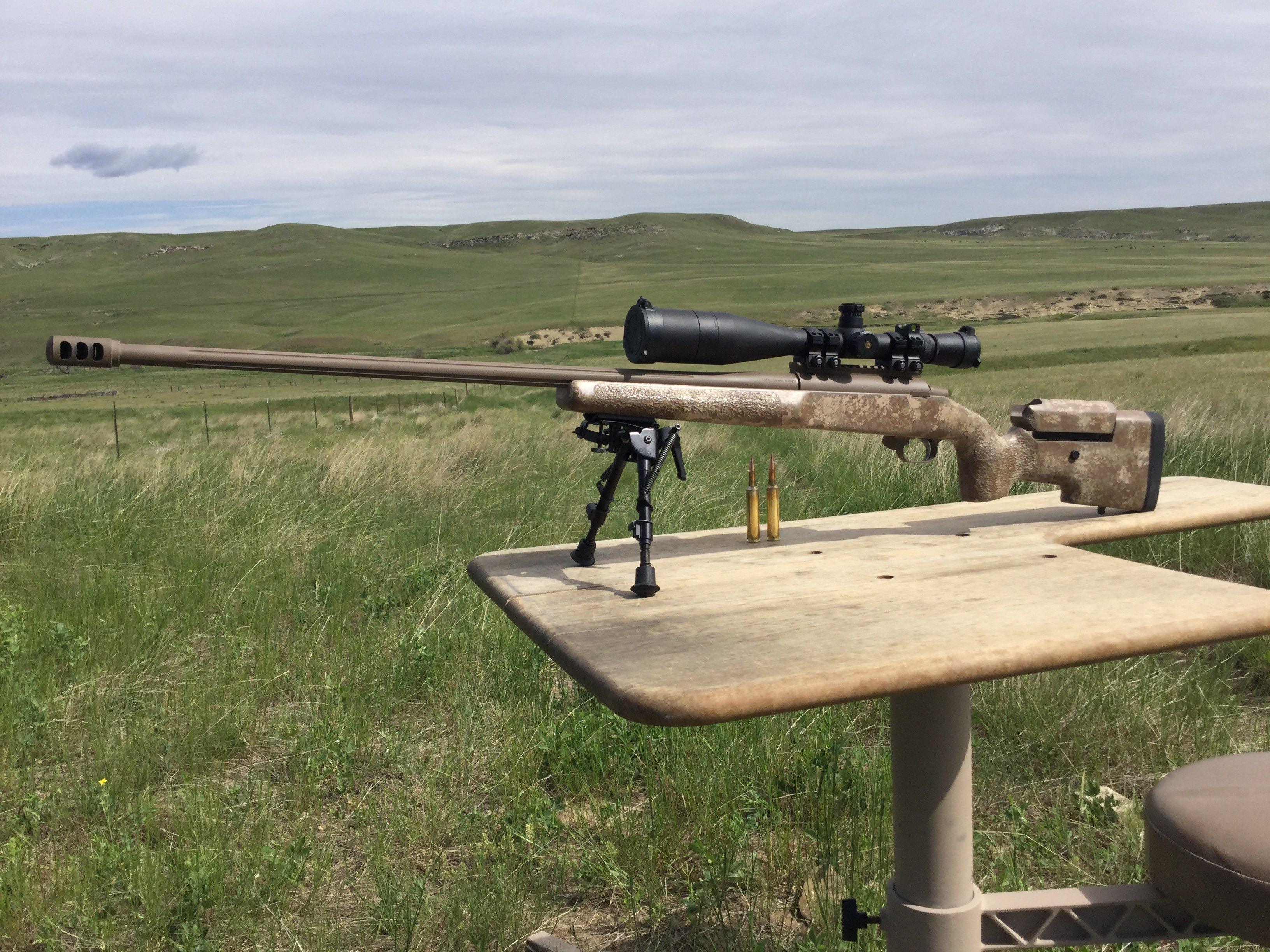 set up at 800 yards and zeroed the rifle at that range. Shot several three shot groups and this rifle easily met my accuracy standard which again i was a bit nervous to see how this light barrel performance accuracy wise. While it heats up quickly, no more then three shot strings but other then that it shot amazingly well.

it was now time to test the drop chart as this was a turn key rifle order. Having been zeroed at 800 yards, i ran the numbers on the ballistic program using the g7 bc value. Zeroed the program at 100 yards. Then read the dial up for 100 to 800 yards and dialed the turret back that amount setting the rifle up with a 100 yard zero if the scope was working properly.

then i tested the rifle at many different ranges from 300 to 1375 yards. Dial up was dead on, or within 1/4 moa of dead on at every range out to 1375 yards. Again, extremely happy with the precision of this rifle for its size and performance level. Could not be happier. I feel using the larger diameter receiver and not getting carried away with the stock lightening was critical in this level of precision at relatively light weight.

all this with conventional chamber/throat to offer as long of a barrel life as possible, no magic, no smoke and mirrors, just good old fashioned performance with comfortable chamber pressures, case life in the 10 firings per case level and legit 1/2 moa accuacy potential at 1k yards. Oh, and all in a 14 lb class rifle that is not much longer then a standard rem 700 sendero!!

very happy with the results and very appreciative to the customer who patiently put up with the wait as there were several delays on this build but each actually helped as we were able to upgrade new tech and get better results.... so THANK YOU for your patients!!

Another awesome package in its "skinny jeans" for those looking for weight reduction in a bad big MAGNUM!
7

That's awesome, well done Kirby! Sometimes everything just comes together, even if it is a little outside the normal realm.
Last edited: Jun 6, 2020
R