Most aren't publishing specific sg's, just recommended twist rates. Kinda like an engine recommending a specific oil for an engine, but not going into the specifics as to why they say 10-30 vs 10-40.

As far as overtwisting, ya it can happen, but at least for mono's, you would have to be pretty radical, such as a 40 grain mono in a 22-250 at 4100 fps, and running it in a 6 twist. With cup and core bullets it happens much sooner, usually with jacket separation. I saw it with 85 grain sierras in my .260 ai with an 8 twist, running a fireforming load, every so often one would blow up before impact. But up until jacket separation issues, even with cup and core bullets, it will only have a negative effect if the bullet isn't perfectly concentric, because it makes any imperfections in the bullet more exaggerated. Generally, monos are lathe cut, and easier to keep consistent, so overtwisting isn't as much of an issue, and no jacket to come apart, so unless as stated, you are radically overtwisting, you shouldn't have any issues.

I just recently got interested in monolithic bullets because of bullet supply / demand issues. Now, I don’t want to get stuck with a barrel / bullet combo that doesn’t meet my goals.

These Hammer and PVA threads have been very informative. Thanks!

Seems the divergence between 180 and 181 twist rate and resulting stability is largely due to the 181 being 0.057” longer.

Thanks all for the input. I'll stick with the 151s. Should be able to get some awesome velocity.

archangel485 said:
Thanks all for the input. I'll stick with the 151s. Should be able to get some awesome velocity.
Click to expand...

With a 24" 8.5" twist suppressed 7mm rem mag, my accurate load is 3390 fps using Reloder 26. Works like a laser beam so far. With powders like H1000 and Retumbo, getting over 3300 fps should not be an issue as long as you don't have a slow barrel. They seem to pressure up very similar to Hammer bullets, getting more velocity than a comparable weight cup and core bullet would.

Speaking of that 7 mag, we have another field report from it. That same 151 @ 3390 fps, this large cow was taken at 585 yards. Shot reported to have went through the top of the heart, elk stumbled a few yards and tipped over and slid down the hill dead within a few seconds. Impact velocity approximately 2650 fps. I'll try to get a more specific report on bullet performance once they get the elk out of the field. 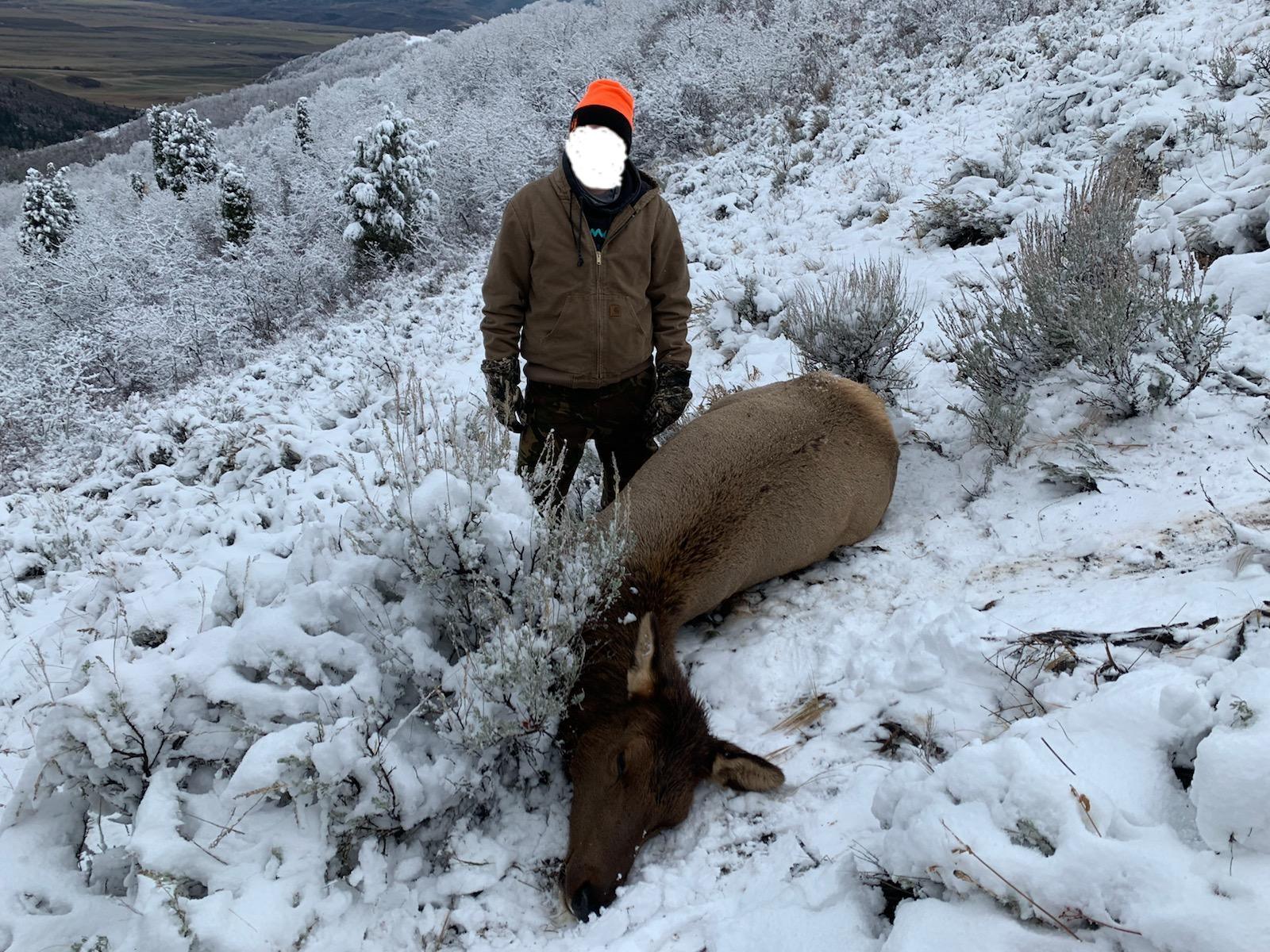 Hopefully more data soon on the 7 mag and 151, the rifle is going on a Colorado mule deer hunt.

Have another report on the 151 PVA from a 7 mag, 3390 fps muzzle velocity. This big buck was shot at 400 yards, slight down hill, head up looking to his right. Shot entered top of the leading edge of the shoulder blade next to the spine, went in through the top of the lungs, top of the stomach, and had multiple exit wounds from bullet and petals out the hind quarter. Strait penetration, the main bullet shank left about 1" of hamburger along it's path through the hind quarter, lungs were jelly, and deer dropped in it's tracks, stopped moving in less than 30 seconds. Spine was not severed, but obviously was affected by shock. 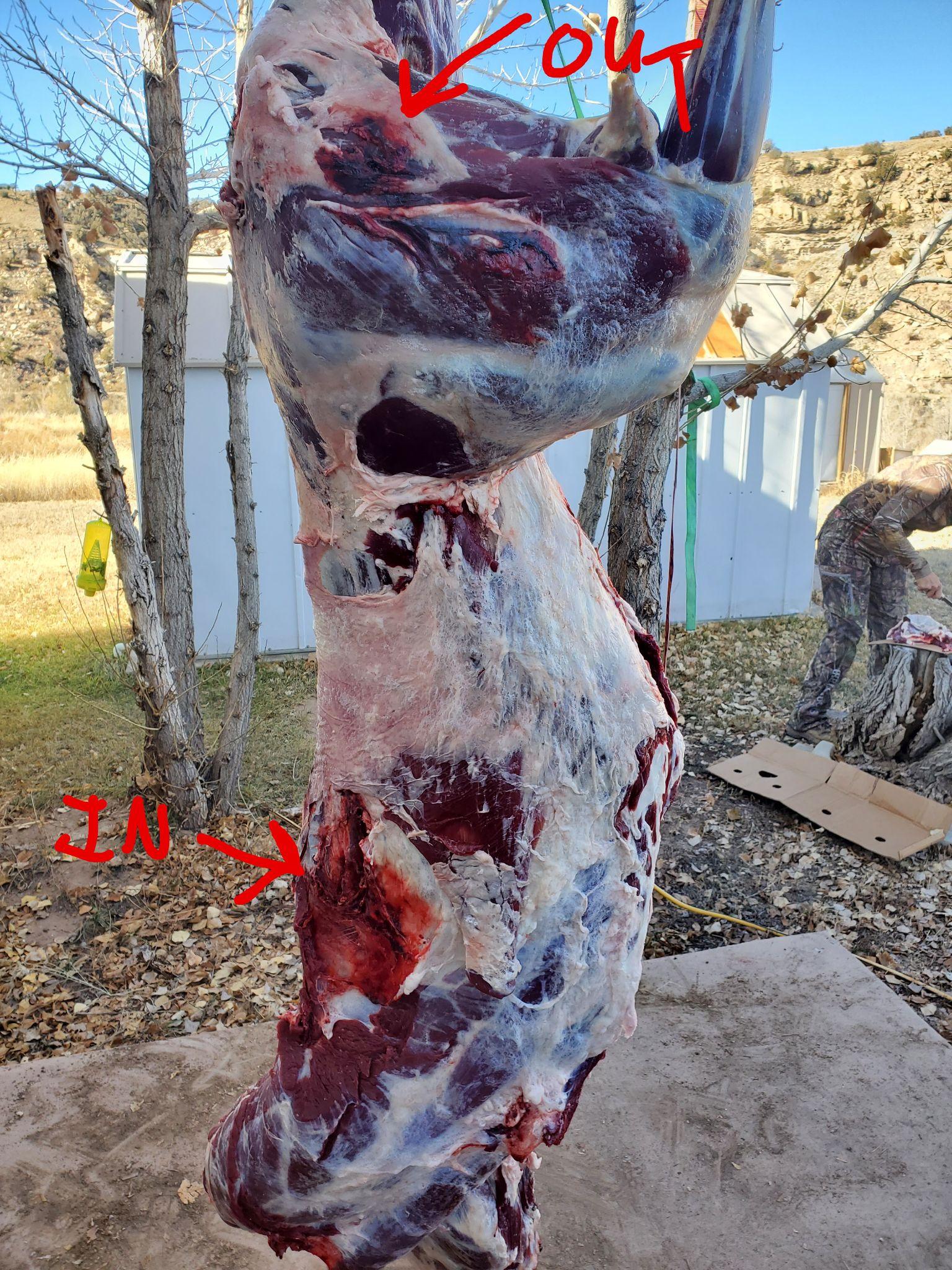 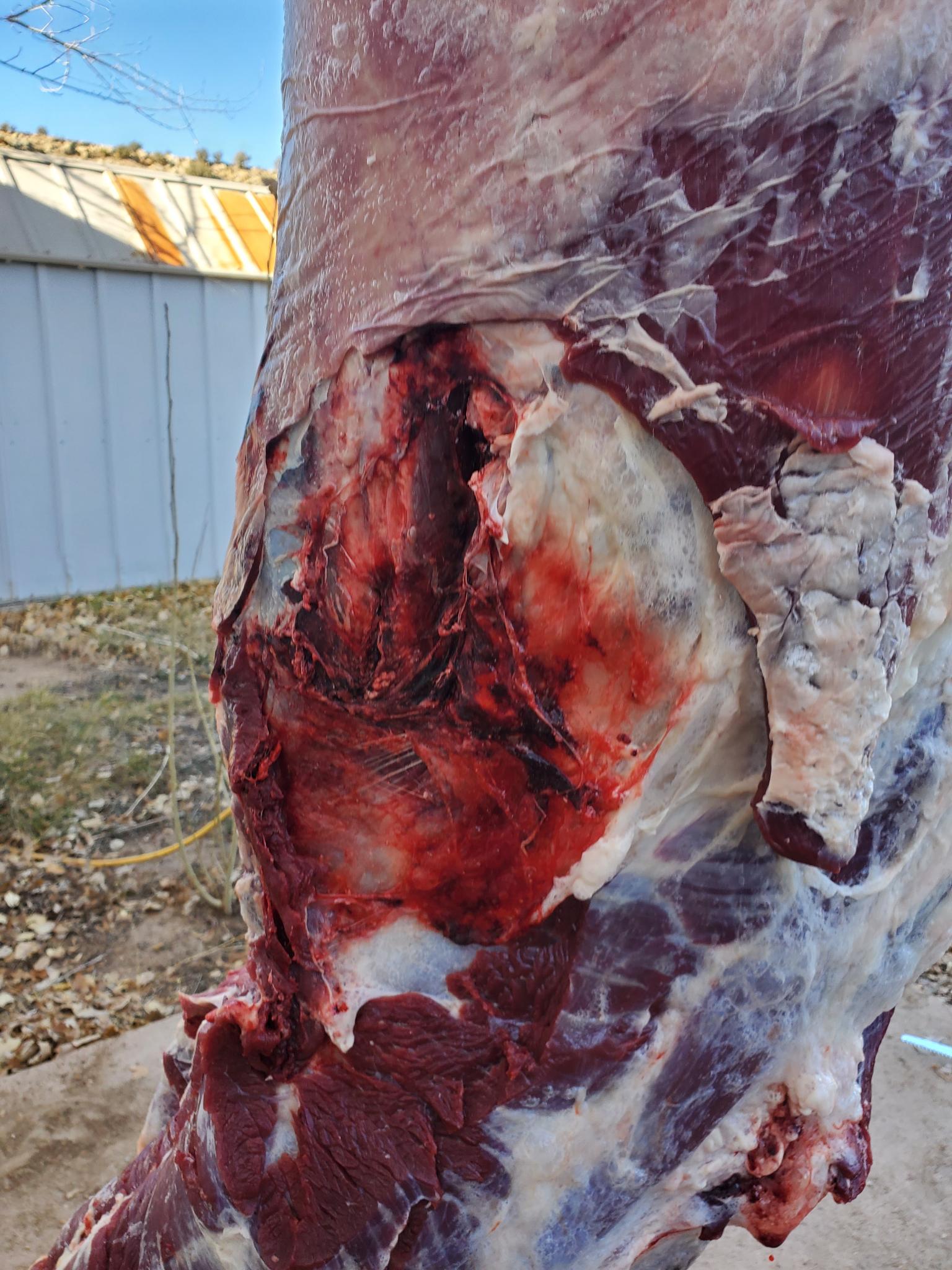 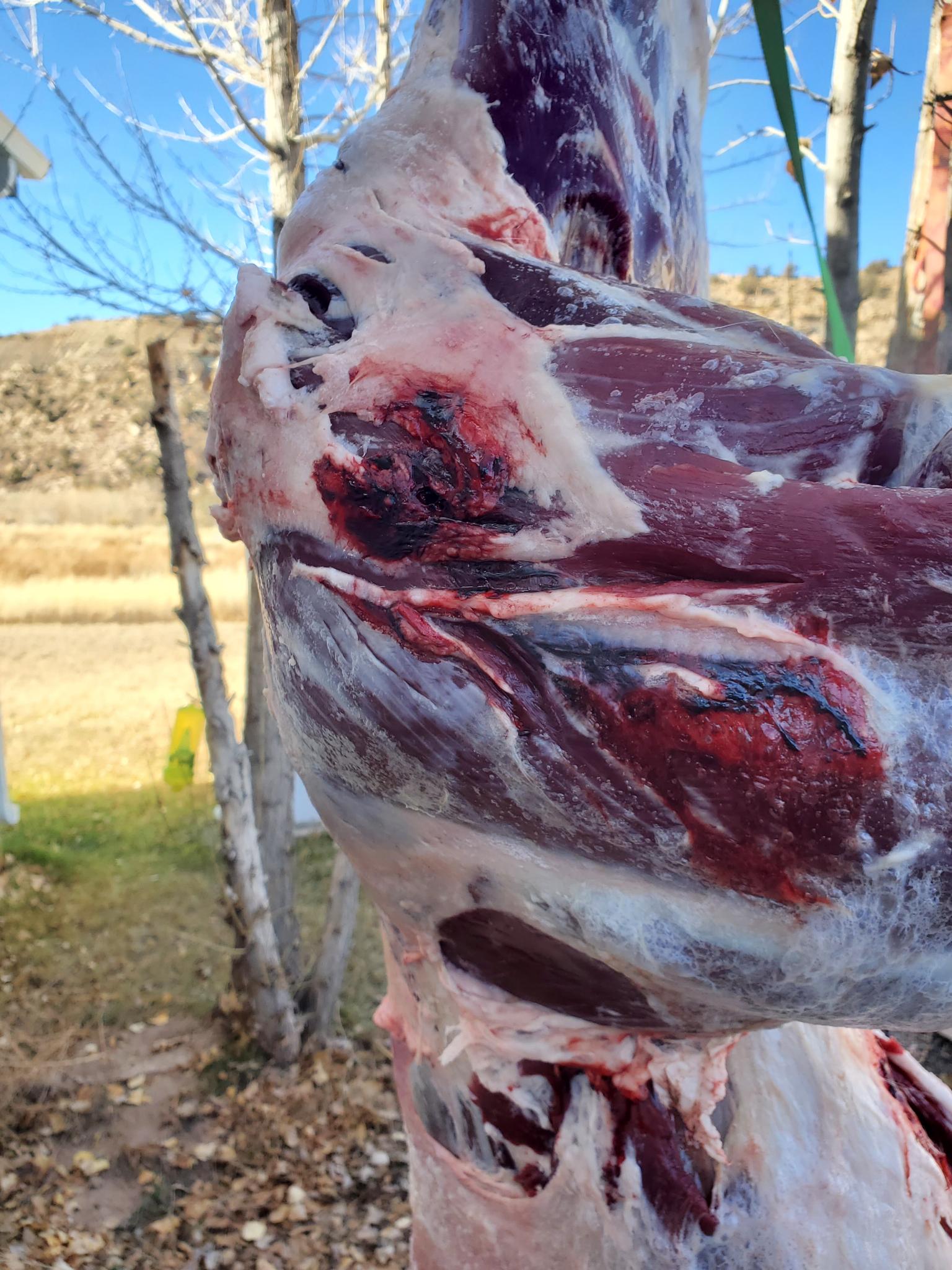 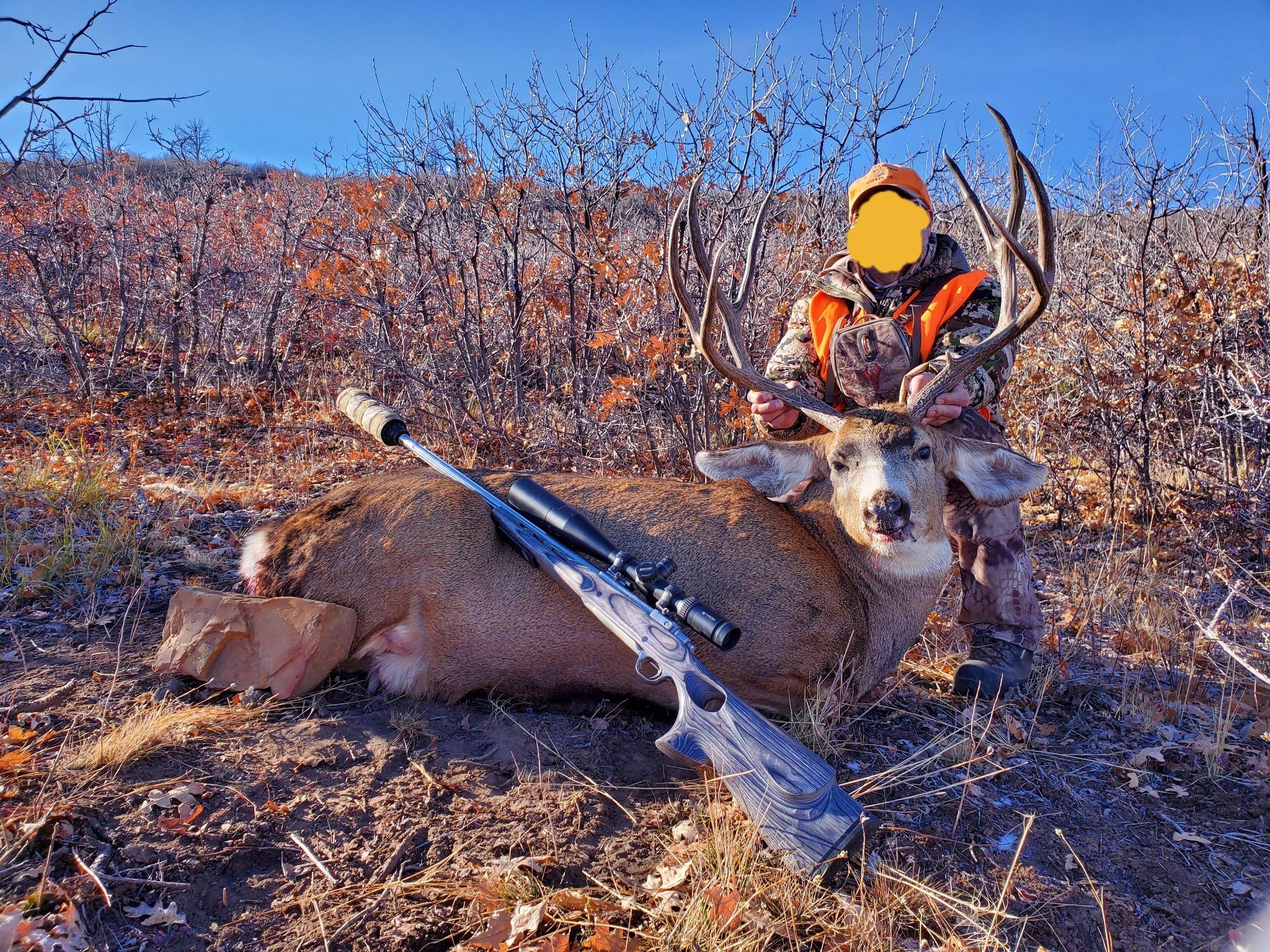 @codyadams That's pretty gnarly! Is the 310g7 working for you out to distance? Thay bullet with its good bc and extreme speed capability is probably the best all around Cayuga solid for ballistics/energy on target. Are you using a 9tw or 8tw?

highdrum said:
@codyadams That's pretty gnarly! Is the 310g7 working for you out to distance? Thay bullet with its good bc and extreme speed capability is probably the best all around Cayuga solid for ballistics/energy on target. Are you using a 9tw or 8tw?
Click to expand...

We are running an 8.5 twist, and when we shot it out to range (farthest of 980) we lowered the bc to .300 to match up with observed drops, I think it was 3-4" low at the furthest distance, so not much off. When they are that close I consider it a success, rifling geometry, scope tracking, optical distortion from mirage, or atmospheric/location geography etc. can easily make a 3-4" difference at nearly 1000 yards like we observed. So far it is working out well, after the several critters we have used them for we don't have a reason to change yet. More seasons will tell!
B

Have the design of these and the Bulldozers changed? I thought they were originally designed to not shed nose petals. I personally like the petals and always figured they’d be better like this.

BEEMAN said:
Have the design of these and the Bulldozers changed? I thought they were originally designed to not shed nose petals. I personally like the petals and always figured they’d be better like this.
Click to expand...

I talked to Josh a while back about possibly drilling out the hollow point deeper, he said it's challenging to do this as the drills break. He also said he is trying a new alloy this season with his own deer hunting, but to my knowledge nothing has changed. Every animal we have killed with the PVA's has had multiple wound channels so far. I know the bulldozer II's changed their hollow point design however.
N

What was your fastest impact with the Cayuga's so far?

Northkill said:
What was your fastest impact with the Cayuga's so far?
Click to expand...