Analysis of Velocity and BC deviations.

Been thinking about this subject again recently, and thought I'd post my analysis, as it might be helpful to others.

We all know that low ES/SD is preferable to high ES/SD, but what sort of real world affects will it have?

The following data was gathered with a LabRadar, using a 7mm Rem Mag, 26", 1:8 twist, X-Caliber barrel, shooting a 175 ELD-X over Reloder 26 (charges were weighed to the nearest kernal on an analytical balance). Brass is neck turned, trimmed to uniform length, annealed, and mandrel sized.

Using JBM ballistics and the LabRadar tracking files, I calculate the B.C. of most every shot I take, as long as it has reliable tracking to >100 yds. Most of these shots were in the 130-170 yd range for tracking, so the data should be fairly robust.

The following charts are produced by running the nominal velocity (2979 fps) and B.C. (0.347 G7) with a 200 yd zero, then altering either the B.C. or velocity to the 90% confidence value (9 out of 10 shots should be within this spread). JBM outputs an elevation for the rifle's zero. In order to prevent the affects of JBM forcing subsequent models through the 200 yd zero, one can turn off this elevation correction, and manually enter the elevation into the software. This is done because a zero is a fixed elevation between scope and rifle. A faster shot would hit high at the zero range, a slower would hit low. If you don't turn off the elevation correction, each model will force the shot through the zero range, regardless of velocity or B.C., which is obviously not how reality works. 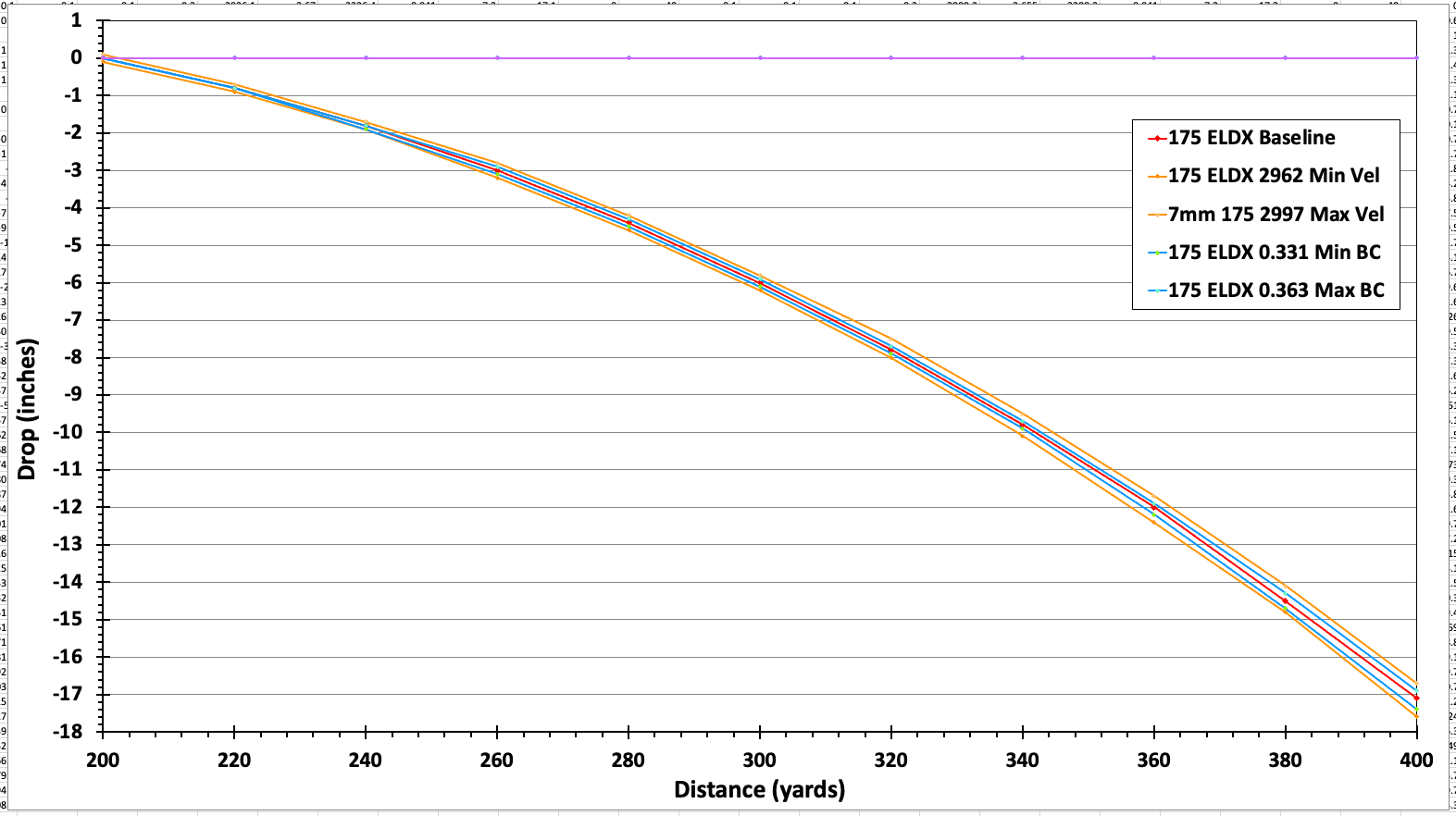 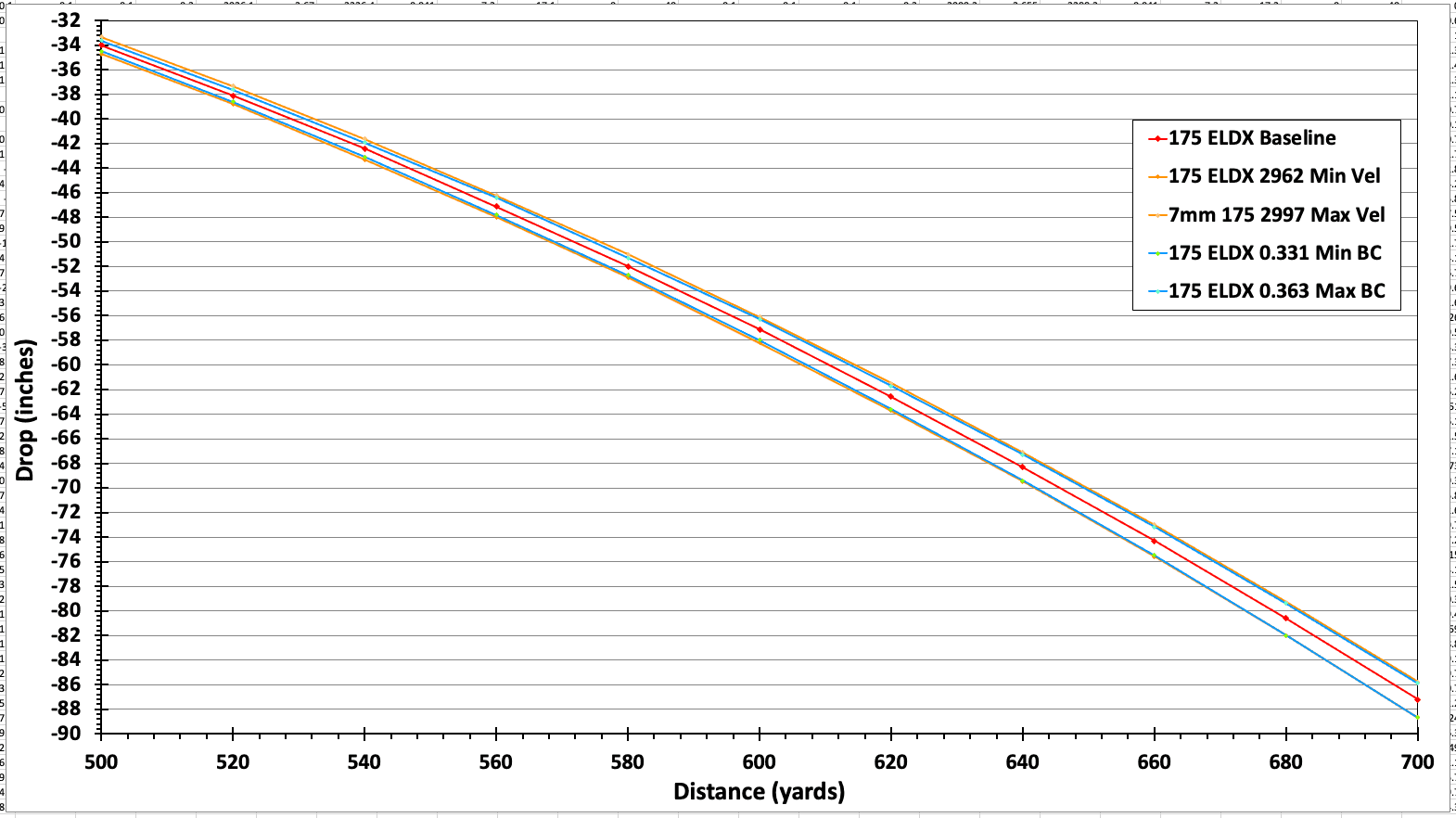 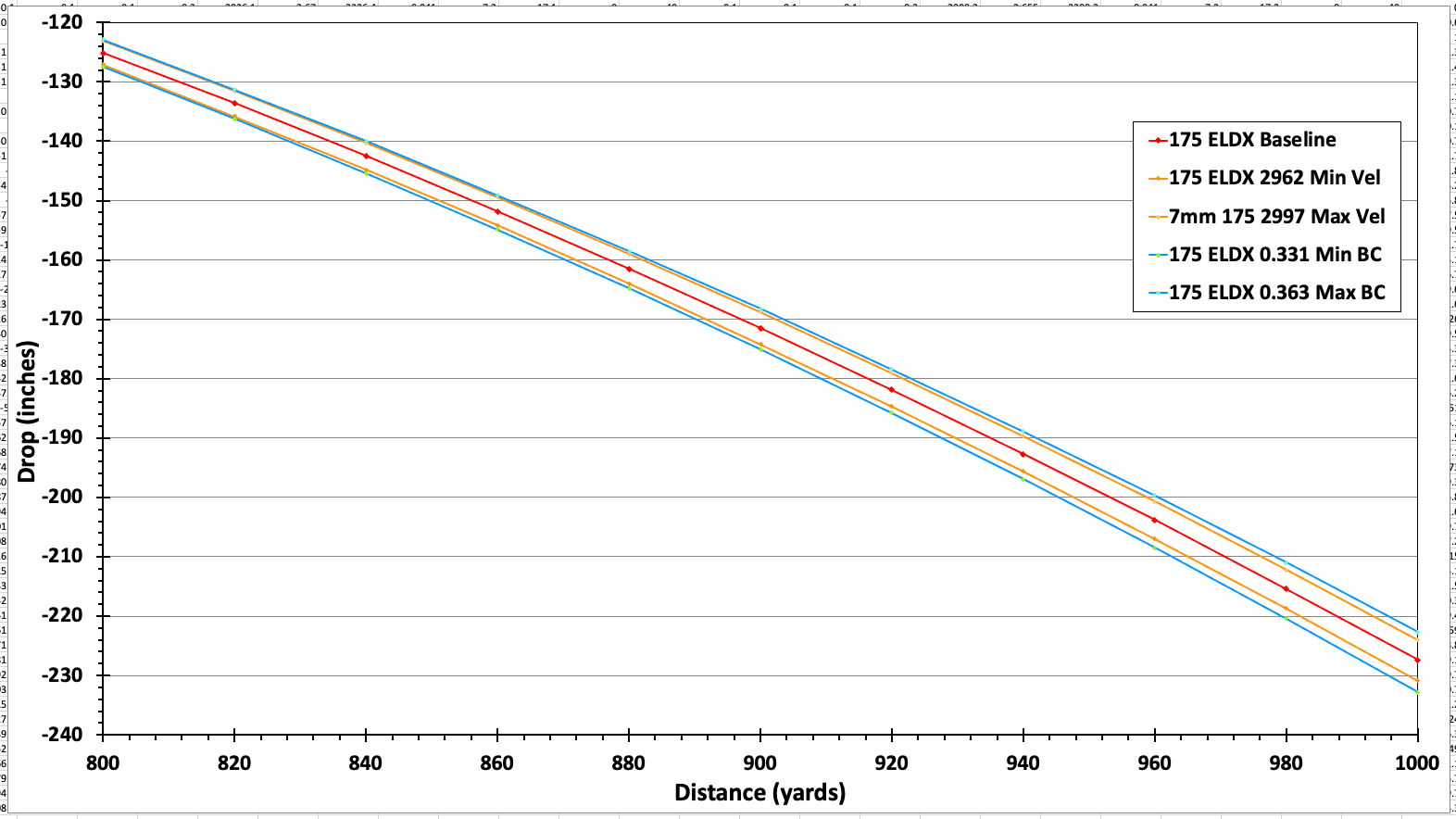 IMO, chasing tiny standard deviation is one of the largest areas of "wasted effort" in long range hunting (400-800 yds). Particularly when folks are relying on a few shots during load development to determine their SD (See this article on PRB). There are several sources of error larger than SD in magnitude, some of these are (in order of least to most important)...

1) Variation in the ballistic coefficient (almost never analyzed or even considered in posts around here), overtakes the deviation in velocity around 700 yds.
2) Temparature sensitivity in your powder. Even H1000 shows ~0.2-0.7 fps per °F, so going from 70° to 30° will impart more than my 90% CI drop in velocity.
3) A range estimation error of only 5 yards (e.g. animal feeding away slowly after you ranged, poor ranging conditions, etc), is half again more than the velocity/BC deviation at 800 yds
4) Over estimating your skill and/or rifle's precision because you only shoot a few 3 shot groups from a bench when it's nice outside (Half MOA all day long when I do my part!). See this article on PRB.
5) Misreading the wind by only 2 mph at 800 yds is a 6" horizontal mistake, even with a high B.C., long range beast, like the 7mm mag with heavies. Swirling winds or an up/down draft across the canyon will make SD meaningless in comparison.

Obviously, if you are an elite shooter, and have a rifle with suitable horse power to take big game at >800 yds, or are trying to hit very small targets, then shrinking the SD is valuable. The problem is, going from a legitimate (i.e. more than a couple 3 shot groups and declaring yourself done) standard deviation of 20 fps to 10 fps SD is a fair amount of effort at the bench. Going from 10 SD to 7 SD is twice that effort, going from 7 SD to 5 SD is twice again that effort (if even possible).

In summary, if I had $100 worth of components and 10 hours of time, I'd spend that shooting in the wind from field positions, rather than at the reloading/shooting bench trying to chase single digit SDs...