Looking to sell one of my 510 Allen Magnum rifles simply to fund R&D for my 458 Allen Magnum and 510 Maximus wildcat projects. This is a hell of a rig. I built it for myself from the start wanting as light a rifle as I could comfortably get but with very comfortable recoil and extreme performance in the 50 cal class of rifles. As with my other 510 AM conversions, this one is also based on a complete AR-50 50 BMG factory rifle with OD green stock. Factory barrel is pulled, receiver accurized and worked over and rebuilt into my 510 Allen Magnum. Here is the parts list in this rifle.

* My match chambers are min spec chambers to offer the highest level of accuracy possible as well as performance with best case life but they are designed so that you should not have to turn your case necks on your ammunition. The 510 AM is designed to fire standard 50 BMG loads through the rifle perfectly safely. That said, you will need to use quality 50 BMG loads. Many samples of surplus 50 BMG ammo is made to such loose specs that it will not chamber in this rifle generally due to a bump on some of the cheaper surpuls ammo just ahead of the shoulder/neck junction. Handloaded 50 BMG ammo will work perfectly well.

Due to some variation in 50 BMG brass, you may find in some lots of brass that you will have the occasional misfire while fireforming brass. This has occured with 2-5% of all brass I have used and its simply a result of some lots of brass or some cases having headspace specs out of the norm with standard brass. Not a huge problem but something to be aware of. Nothing wrong with the rifle, just a brass issue on a few cases from time to time. Once fireformed, no problems at all as they are set to correct headspace specs.

** One common problem with the AR-50 is that the bipod mount will slide under recoil no matter how tight you tighten the mount to the stock. Over time it WILL start to slip. There is nothing worse then a 30 lb rifle slipping off the bipod under recoil.... As such, I solved this problem by solidly mounting the bipod mount to the stock forend using 4, 1/4x28 tpi large tapered head mounting bolts. It will never work loose but yet if you want to remove it you simply unscrew the mounting bolts and take it off the stock.

Another problem with the APA rear mono pod is that while its nice to have the fast adjust option, I have yet to see one that would not slip under recoil so when you come back on the rifle, your rifle is pointing far off into space because the monopod had dropped out from under your rifle. I solved this by modifying it with a solid screw system to remove the quick adjust mode. Now it will solidly support the rifle at all times and you just need to screw the foot pad clockwise adjust the rifle impact higher or counter clockwise to adjust impact lower. Very simple and bullet proof now. Will not slip under recoil.

*** I will supply exact load data for the one load I have developed in this rifle. I do not have the exact specs in front of me but I know the average velocity with the 750 gr A-Max was 2960 fps!!! Thats a solid 200 fps faster then anything the standard 50 BMG should be loaded to.

This barrel was also broken in during load development so that is not needed. Basically a turn key rifle ready to take out and shoot. I do recommend cleaning these rifles after every 50 rounds max to stay on top of carbon and copper fouling. In spite of the extremely fine bore finish, all 50 cal rifles produce copper fouling, no way around that with the huge baring surface they have with the large bullets. If you stay on top of it, its not a problem at all.

This rifle has 75 rounds down the barrel including load development and barrel break in. Its as new as you can get, in fact its better then new because there is no barrel break in needed with this rifle and no load development needed if you do not want to as this load has shot very well in testing. This load was developed mainly for a hunting/performance load first and formost. There were some milder loads that produced slightly better accuracy and consistancy but this top load shot extremely well and offers what I believe is the best of both worlds, accuracy and performance.

Recoil is very comfortable. yes it moves you a bit but no more then a standard 50 BMG because the higher muzzle pressure allows the Armalite muzzle brake to perform more effectively at reducing recoil. Also, the rifle is roughly 2 lbs lighter then the standard AR-50 rifle so the muzzle brake is also more effective at reducing recoil velocity so felt recoil is reduced. The AR-50 muzzle brake is THE most effective muzzle brake on the market today. I have tried to make a better one for the 50 cal rifles and in my opinion, for the size and cost of the AR-50 brake, it can not be improved on, especially for smaller diameter muzzles such as this Lilja Navy Sporter contour.

Here are some pics of the beast. When these pics were taken, the rifle was wearing a NF NXS scope. That has now been changed to the Vortex Razor which in my opinion is AT LEAST the full equal to the NF and in many areas its my opinion that its a superior optical system. When you combine the +130 moa of vertical adjustment and then add in the potential hold over offered by the reticle, your taking about some EXTREME long range potential with this combo. 0 to 3000 yard reach is realistic with this combination of rifle and optics simply by dialing up and using the reticle. Exbal predicts this load would need 110 moa of vertical adjustment from a 100 yard zero to be dead on at 3000 yards. With the +130 moa adjustment of the Razor and the 50 moa rail base, should be able to dial up to that range...... 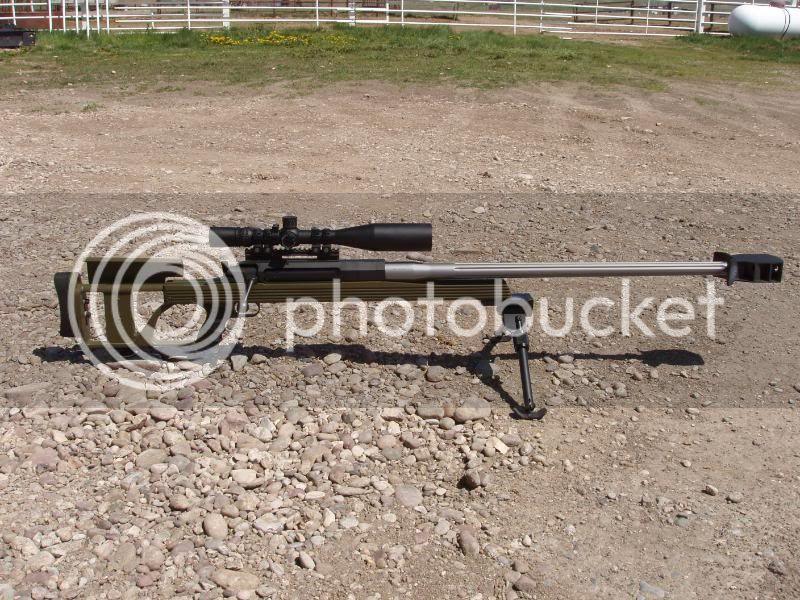 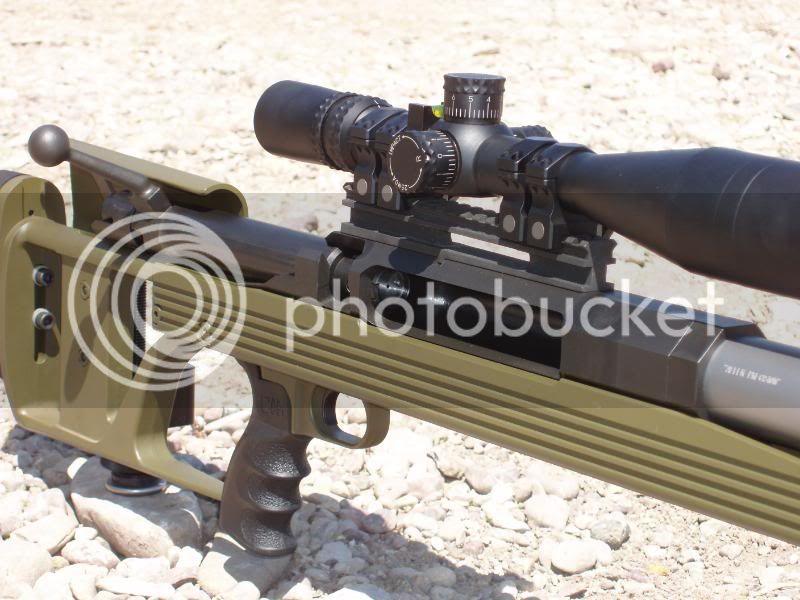 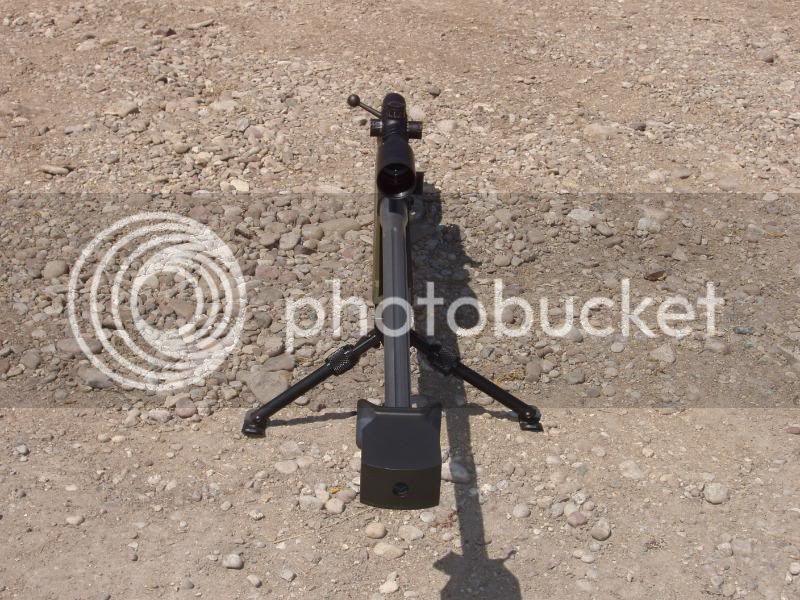 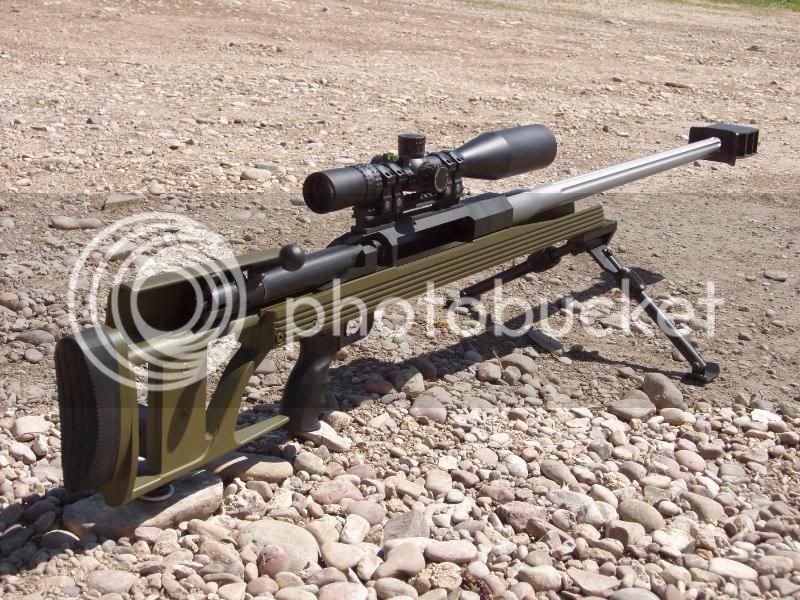 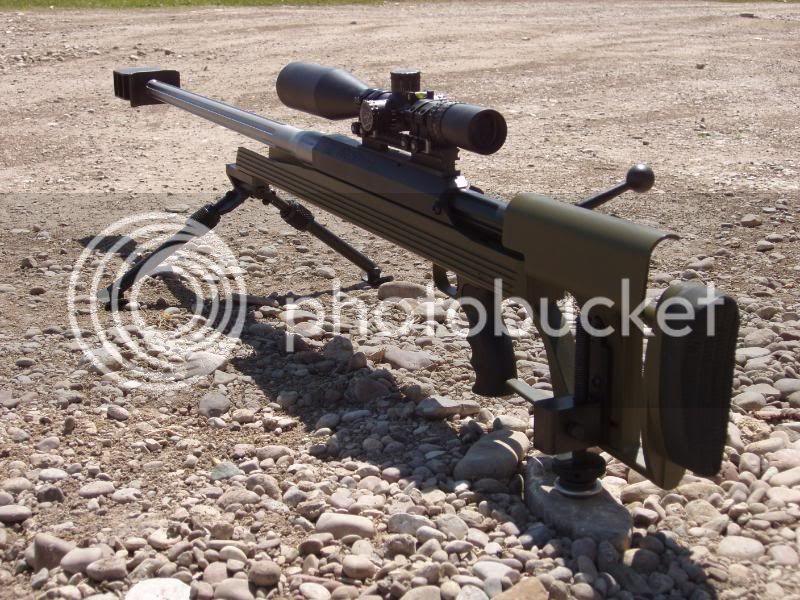 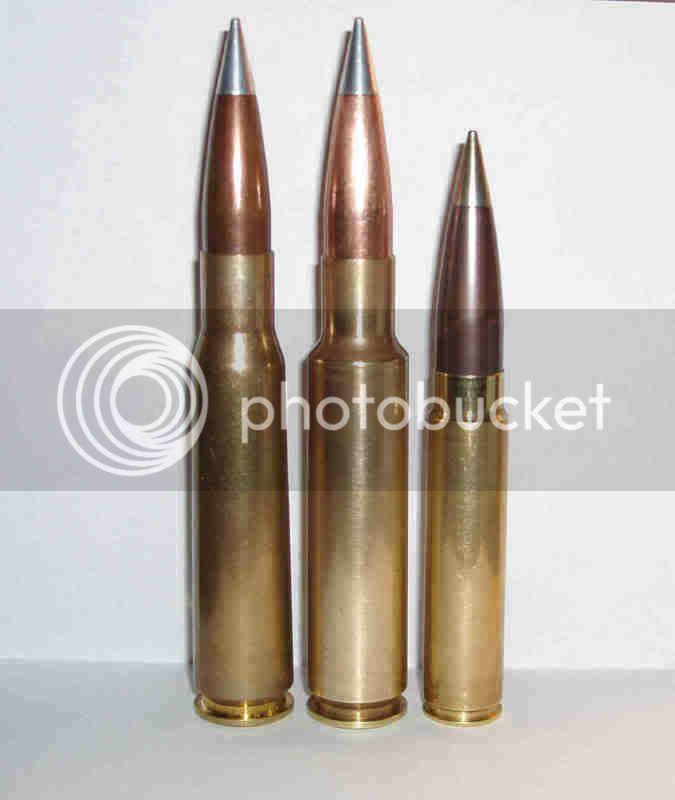 Here is a look at the 510 Allen Magnum wildcat cartridge. On the left is a standard 50 BMG match load that I used for fireforming. Middle is the full performance 510 Allen Magnum and on the right is my 50 Allen Tactical based on the 408 Chey Tac parent case.

You do need some specialized loading equipment for this class of chambering. Namely a big loading press but you can get an RCBS Ammomaster 50 BMG press for very reasonable prices and that will get you loading for the 510 AM. If you can load a 30-06, you can load a 510 AM, no different, just scaled up ALOT!!! As always I am available for any questions from customers about loading for my wildcats so your never on your own.

As mentioned, rifle is available with or without octics. Price is pretty fixed at this point. Because of the condition of this rifle I feel the asking price is already pretty well rock bottom for what you get and MUCH lower then new order list price. As always, fully backed by me to the new owner. This rifle is sold as new with all backing of my company.

As an added incentive. If you decided to down the road, you could get replacement barrels for my 458 Allen Magnum and 510 Maximus at a reduced price compared to the general public with the sale of this rifle. Standard replacement barrels are generally $1500 for new barrel and complete fitting and finish. If you purchase this rifle they would be available for $1300 each if you decide to do that down the road. No time limit on that decision. This price does not include shipping or loading die set for wildcat chamberings but I will have those available as well.

Again, pretty solid on price. First come first serve. Not interested in any trades at this time, again, as mentioned, this sell will fund these next two wildcat chamberings in the ALLEN PRECISION wildcat family.

Thanks for your interest and time. Any questions, PLEASE sent to [email protected] and I will get you all the information you need on this rifle or the 510 Allen Magnum in general.

Well guys, got some bad news today. Seems this flooding this spring has taken been hard on my Duramax. Helping others get out of the water and need to replace some front end parts because of extreme amounts of water.

Anyway, did not really want to do this but need to move this rifle to help pay for the truck repairs. Will take $1000 off the quoted sale price.

That is $8700 + shipping for complete rifle with optics

cant hold out any longer - kirbys work is a work of art -- i'll take !