KyCarl said:
This is a interesting read I've enjoyed it! I'll never get to Africa but it sounds great.
Click to expand...

Don't do it, Africa is more addicting than any drug ever invented. If you go once, and only once you'll spend the rest of your life trying to figure out a way to get back.

GlennL said:
As a resident hunter (of 45 years+) here in South Africa I would tend to strongly agree with the comments that a 270 in any configuration is too light on Eland. They are extremely tough animals and I've seen an Eland shot 8 times with reasonably well-placed shots with a 375 H&H Magnum by another experienced hunter and it got away!

One thing you'll find with some game is that not all of them understand or subscribe to terminal ballistic theory!

I figure your 270 WSM is fine for all other plains game up to Kudu, Gemsbuck, Sable, Hartebeest and Wildebeest for taking down trophy animals. For myself, hunting for table meat I'd favour a slower moving round to minimise meat damage.

As a foreign hunter in Africa, you'll be required to use the services of a local registered professional hunter. They generally carry back-up rifles ranging in calibre from 375 H&H up to 416 Rigby and 470 NE. I'm sure he'll be only too willing to lend you his rifle for this task rather than facing hours of following up a wounded animal should you insist on using a less than adequate calibre for the job!

Notwithstanding comments about someone taking large game with smaller calibres, I must mention that I have heard from a Game Warden in the old Rhodesia (now Zimbabwe) of a poacher killing an elephant with a .22LR rifle. I think he was lucky not to be trampled to death! A case in point here is that 22LR does not a dangerous game rifle make! I have also heard of a professional hunter, game culler and competitive shooter taking an Eland with a 260 Remington out of a Savage LRP rifle!

If I may share my experience of hunting here in Africa - Years ago, I hunted up near the Limpopo River with a German chap who shot four mature Warthog boars over three days with a 375 H&H Magnum. All were good, solid, side-on chest shots. Two of the four took off, went to ground in their burrows and were never recovered! On the other side, one chap I was guiding on his first hunt shot a Warthog sow at about 30 meters /33 yards with a 308 Win in the chest despite my instruction for him to shoot it in the head. It dropped to the shot! How do we explain the unexpected and varied outcomes? Is shot placement a factor, or is projectile velocity more important on this species? Who knows!

In my time I have harvested well over 200 Warthog and one or two Bushpig (Wild Boar) for the table with my 270 WIn, 308 Win, 7X57mm Mauser, 375 H&H and 45-70 Govt. rifles and my 44 Magnum Super Blackhawk revolver (a self defence shot after being charged!). All have been head or neck shots ranging from one yard to 150 yards. All, bar one, dropped in their tracks. That one, a grumpy old boar with 11" tusks took off and required a neck shot and another head shot to kill it. Warthogs can be extremely tough characters too!

If you are dead-set on using your 270WSM on Eland I'd definitely use a monolithic solid such as the Barnes or the South African produced GS Custom moly-coated monolithics. Contact Gerry Schultz to get his advice on suitable bullet weight and loads. Wait for a side-on shot and take it on the line straight up from its front leg so the round has a better chance of breaking the shoulder or limb and going through the heart and lungs.

If I was setting out for Eland, I would reach for my 375 H&H. If I had a 338 Win Mag, a 300 Win or Weatherby Mag rifle they may be a consideration given the long shots on Eland (they're generally a Highveld species that require shooting at extended ranges, probably not less than 300 yards across open grasslands or in hilly and mountainous regions).

Whatever you decide, enjoy your hunt here and Good Luck.
Click to expand...

I've shot both the GS Custom and the Perigrines from the RSA both make a fine bullet but for any kind of extended range shooting I'll take the Peregrines all day long. The VLR's are just a phenomenal bullet that always shoots well and gives the best, most consistent terminal performance I've ever seen in over 45 years of shooting center fires.

Allen Kitts said:
Heaviest bullet you can get to shoot good would be my suggestion. I have not taken an Eland but did shoot a large Kudu bull with a 6.5 x 284, 140 grain Berger Elite Hunter. The bull went 25 yards. While I agree that maybe the 270WSM may not be the optimum gun for the task at hand, its where you place the bullet that matters. All of the premium bullets mentioned above will work great, just make sure of your shot and get it into the boiler room. It will do its job.
Click to expand...

The eland has on average more than twice the mass of the Kudu. The lightest I'd consider on Eland would be a .300wm and preferably the Rum.

Given a choice I would always reach for the .375 Ruger over anything else for something that large, dense, and tough.

I'd be heartbroken losing anything I shot in Africa but the loss of something as magnificent as a big Eland would be devastating and something I'd never forgive myself for.

There are places so wide open it would be hard to lose one if it was hit even marginally well, but much of Africa is far thicker than what we Americans think of as where you'd find "Plains Game". Much of it is as thick as scrub oak and sumac and as tall as mesquites and unless you just happen to get lucky most of the RSA, Zimbabwe and Namibia are usually so dry that blood just disappears in seconds unless it happens to land on a leaf or tall grass. I've seen blood hit the sand and instantly bead up covered in sand and dry into little tiny balls smaller than bb's.

When that sand has just a little moisture in it blood seems to just vanish it soaks in so quickly.

The locals and PH's have a lifetime of studying and learning the exact anatomy of each of the game animals and tend to be among the best shooters I've ever worked or hunted with so they can get away with using lighter bullets and smaller less energetic projectiles than most of us can.

Additionally, remember, if one drop of blood is found, you bought it whether it's recovered or not.

Well I DO NOT and WILL NOT fly..Period End of Story!!
I refuse to even discuss it!
So if I can't drive there I don't go! I can walk or even swim farther than anyone else can fly!
Last edited: Feb 9, 2019
B

Don't shoot an eland with 150gn class bullets. Get at least up into 200gns and honestly, I'd use more gun than a 300mag. My eland was only 1000lbs standing, an adolescent bull. I shot it in the chest @ ~300m with a .338WM sporting 225gn Interlocks at nearly 2800fps MV. It took the first shot in the chest and walked/trotted 2KM. We shot it 2 more times before it finally died. Not one of the bullets exited. The first bullet took off a wad of the top of the heart and poked both lungs and fractured one shoulder. The other 2 broke a rear thigh bone and cavitated the blood filled chest. You have no idea how far they can go with a mortal wound or how hard it is to track one for miles if you don't get an exit to make a blood trail.

You can't bring too much gun for Africa. An impala I shot in the chest with .300WSM with 180's managed to get up and make a good long run. It happens all the time. African animals don't just lay over and die like deer. You have to KILL them.

Me and a good friend with my eland. 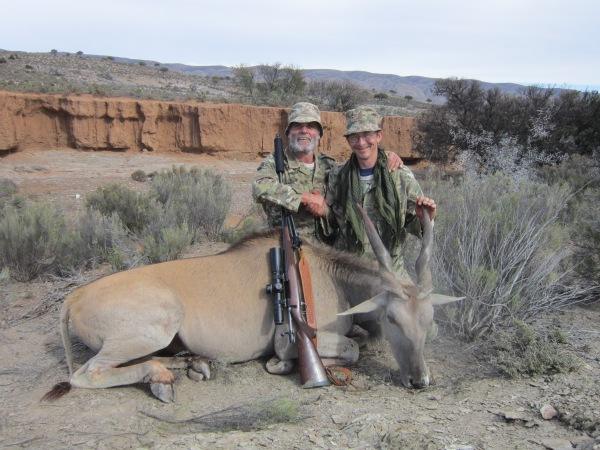 A frame or accubonds will do the trick. .270 wsm is a killing machine

LongestShot said:
Many different points of view, a lot to consider. One thing that hasn't been addressed is the issue of shooting a rifle that you are competent with; taking a 375 H&H does little good if you're not comfortable shooting one. Accuracy is key, everything else takes second place. I've got a 300 Weatherby but wouldn't consider taking it because of the bloody recoil. I just don't shoot it well.
Click to expand...

LongestShot said:
Many different points of view, a lot to consider. One thing that hasn't been addressed is the issue of shooting a rifle that you are competent with; taking a 375 H&H does little good if you're not comfortable shooting one. Accuracy is key, everything else takes second place. I've got a 300 Weatherby but wouldn't consider taking it because of the bloody recoil. I just don't shoot it well.
Click to expand...

I cannot explain why, but the .375 H&H is less of a pain to shoot than more modern magnums. I've shot a lot of animals in Africa, and my favorite rifles are a 7mm Rem. Mag and a .375 H&H magnum. I can shoot a box of bullets out of the H&H off a bench at one sitting, but am uncomfortable doing that with a .30-'06. Felt recoil and all.

The .375 H&H was my go-to gun for everything but elephant. Great caliber, and not a shoulder breaker.

I've shot all of my African game with arrows. Never more than 1 shot, ever, honest. Not much DRT, but pretty much all dead within 50-100 big steps. Going back for Cape Buffalo in April with the bow for, stout load of 950+grns at 230fps. No ballistic app required, but do expect full penetration. Also eland, hartebeest, etc., ~520g @ 260fps. Still no app required. Will also have my 28 Nosler with 175 A-frames for those that don't want to comply to short range rules. Wish me luck.