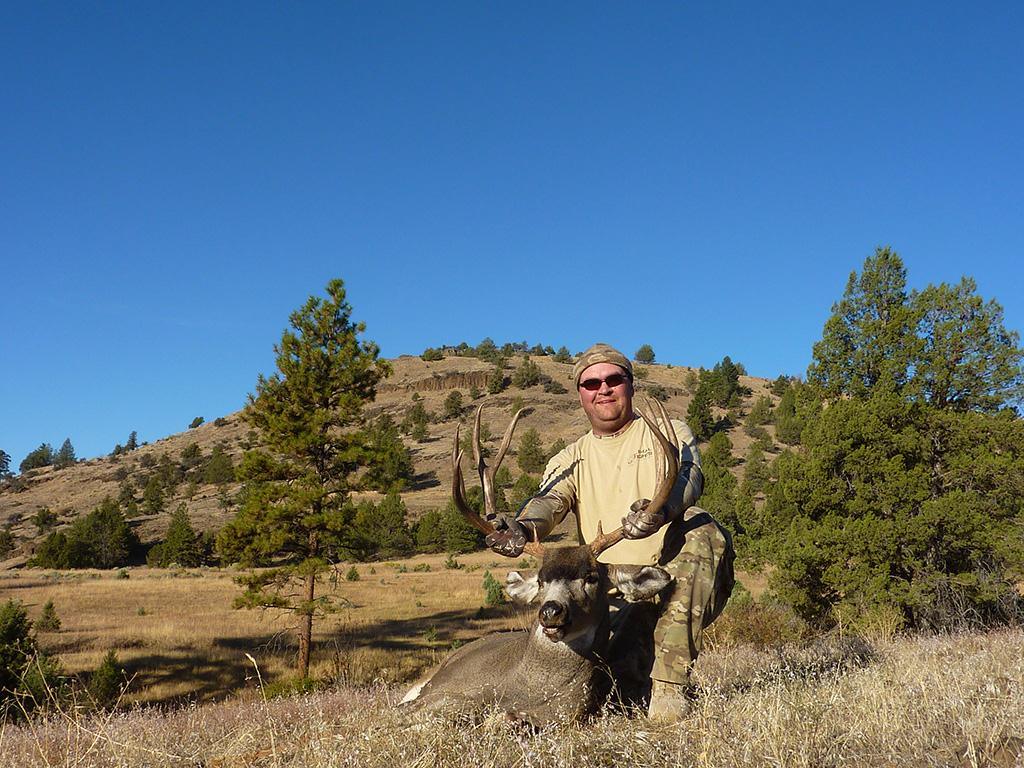 Arrow shows where the shot was taken from. 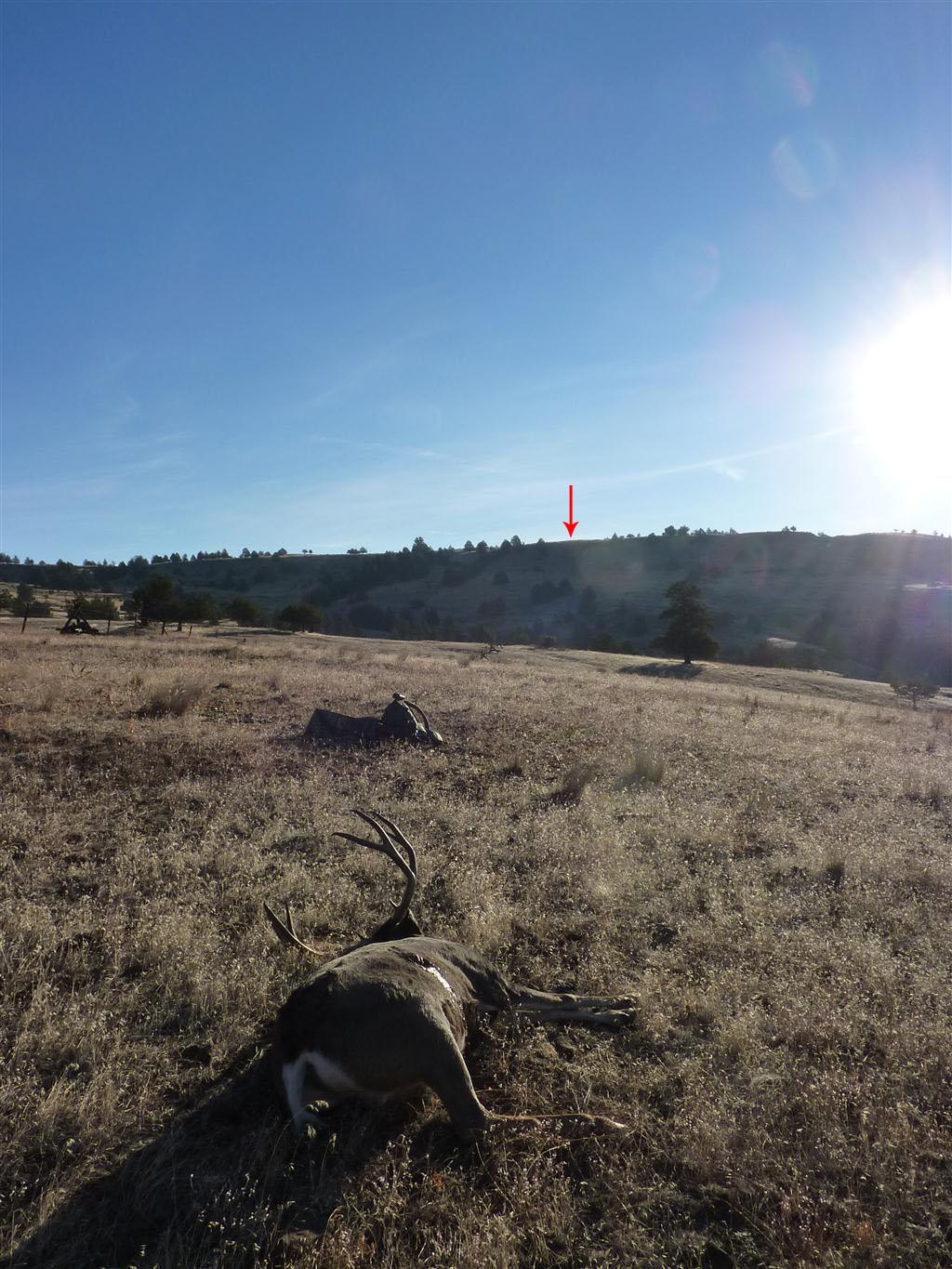 Witnesses. There were 2 more sitting in a jeep about 500yds to our left on the same ridge. 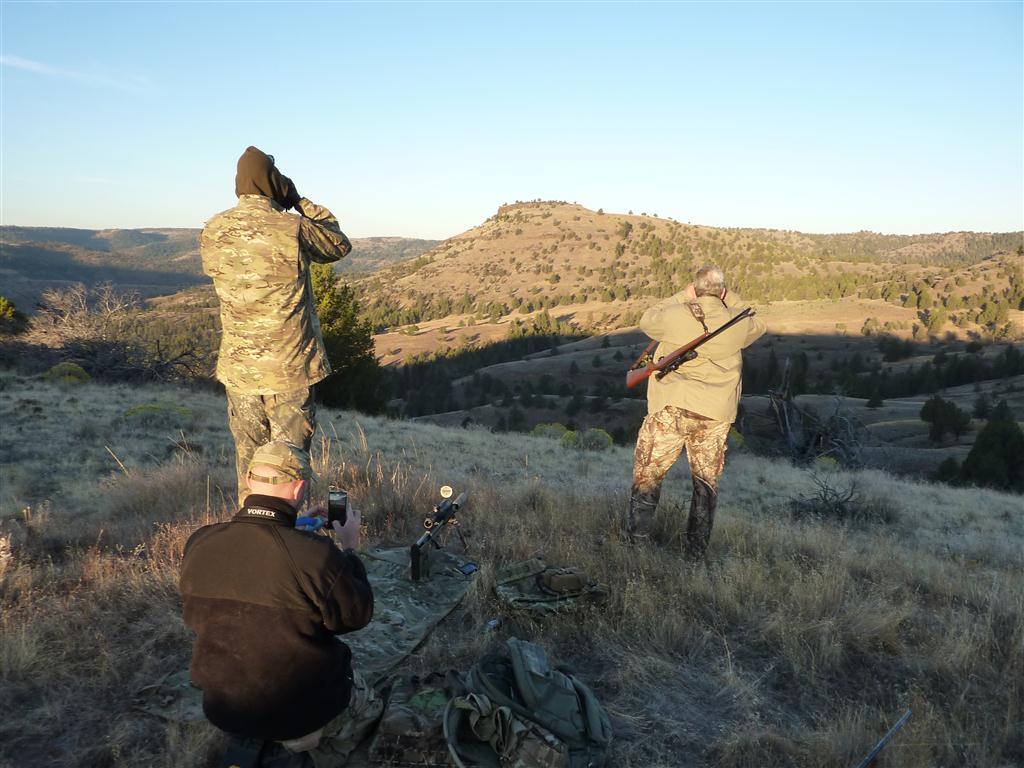 At camp, when I was telling of what I intended to shoot, and how far I was willing to shoot it, I was met with more than a little bit of skepticism.

Afterward, skepticism turned to amazement. It's good to be the king... if only for a little while. 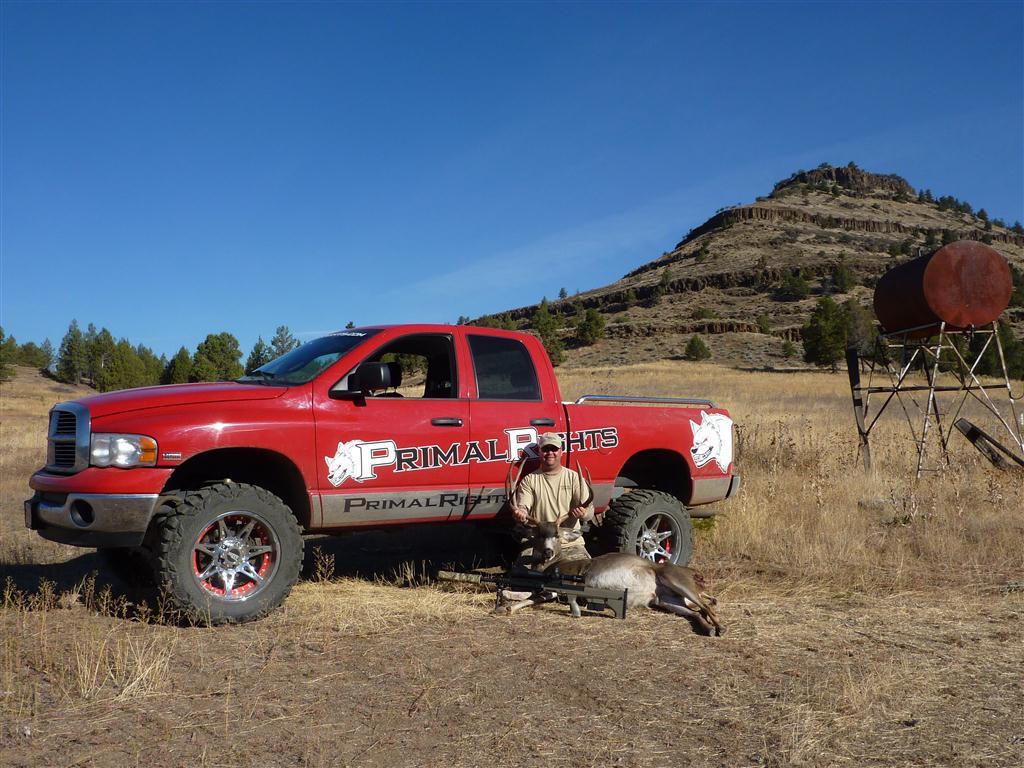 I watched and waited until the deer gave me a broadside. As soon as that happened, I sent a 285gr hornady his way. The first round hit him, but I couldn't quite tell where. He was very damaged, but still on his feet and started walking. I racked the bolt, applied a bit of lead and touched it off. Hit him again, but he still wasn't on the ground. He changed directions, so I reversed my lead, added about half a mil and sent another one. This time his *** hit the ground, followed shortly by his head. I was overcome. I literally jumped up off the rifle and hugged everybody. I knew what was laying on the ground down there... no one else really did until we walked up to it.

The first shot I fired blew its lungs out. It hit about 4" low from dead center. Second shot hit it in the *** as it was walking. Third shot went just high of the vitals, spined it, and came out halfway down the other side as he was walking the other way. The down angle shot and the trajectory at that distance made for some interesting wound channels. In that rough terrain, I wasn't about to risk him getting away, so I fired until he was on the ground.

Awesome! Congrats on a great shot on a trophy Julie. Thanks for sharing.
C

Nice, Bet it was exciting for sure!
J

Great shot! That's a nice buck for Oregon! You do not see very many that size out here.
T

Maybe I missed it, but what was the range?
W

Check the title of the thread
T

Willys46 said:
Great shot! That's a nice buck for Oregon! You do not see very many that size out here.
Click to expand...

Go east willys46. Eastern oregon has LOTS of them that big and bigger.
W

Hunted East all my life---now when i draw tags.

The bucks like that used to be very common place in Oregon, they are getting far and few between.

The units that hold a higher percent of those deer are areas that take two many points to draw. So we search for bucks like that in areas that we can hunt every other year. Just makes it much more rewarding when you get one!

I see your form SD, are you orginally from here or just come in on a out of state tag? How many point to draw the unit?

Great job on the hunt and shooting!

Nope, I'm not from Oregon. Got invited out by some friends. Not sure how many points to draw.

That's sad to hear that bucks like this aren't as common as they used to be. I know the area I hunted in turned into a madhouse the day before opener. LOTS of pressure. It seems like a great many fish and wildlife departments/agencies are managing MONEY instead of managing natural resources. The pronghorn antelope herds are virtually extinct in western south dakota due to this. We've seen numbers decline for the last 3 years, yet they still hand out double tags like candy.

It is getting increasingly difficult to find good bucks. If you can't afford to go in on a lease with someone... you are pretty much up the creek without a paddle.
E

Awesome shooting. It must have been thrilling. How long were you on the hunt? The scenery is to die for. Dinner is served!
W

I hear ya, I’m sure its just like what you have. Our ODFW is completely infiltrated with bark humping hippies that DO NOT want us hunting! The only reason they allow us to is for their budget!

Now they are closing all the roads (which can be a good thing) knowing our aging hunting population cannot hike 5 miles off the road to hunt any more. Heck my 87 year old grandfather has given up, he is disabled but still lives to hunt. We would take him road hunting (legal in OR fo disabled people) to get him out, now with the road closure, NO HUNTING FOR HIM!

Like it or not it is becoming a rich man sport! I can pay to go hunting on a lease, but choose to follow my dream of a DIY 30" public land Mulie. He will be standing next to the unicorn.

Heck, we are at the point we hunt are area every three years. The west side is a free for all. A Mature Black tail deer is very difficult to come by out west. The west side of Oregon is completely shut down do to fire danger. Second weekend of season and most hunters are stuck sitting home watching football!

Sorry for the rant....This is the wrong place I am sure, But that really is a nice buck. If they grew on trees over here I would have one on the wall!
Share:
Reddit Pinterest Tumblr WhatsApp Email Share Link