Today was supposed to be a great day for shooting and as I had to go into town for a cardiologist appointment, figured I'd load up the truck with shooting gear last night and stop at the club afterwards.
Meeting with the doc went very well

My entire intent today was to determine the actual drops of 8208 and the Arrowhead 300gr XLD bullets at range, also compare them to the JBM chart. Also it would be the first time shooting 8208.

There were 3 shooters there when I pulled up and 2 were checking targets, so I drove down and hung up targets at 3,4,5 & 600yds.
Dialed to what JBM indicated for 300yds and sent the first two, which ended up touching, the 3rd was about an inch away. JBM was correct.
So then my next 3 were to be at 400yds. I looked down there and my target somehow had fallen, so to heck with 4, lets just go to 500yds.
At 500yds JBM was just close to a minute high, so I corrected that on my sheet and prepared to shoot 600yds.

Now we all know that when shooting any muzzleloader at distance, it draws a lot of questions. That was a good thing, as it created a good break and great conversations. As always, CF shooters are just amazed at how far a muzzleloader will shoot, even though today I was shooting SML.

There was very little wind, almost none, but what there was, was coming from the west. I used the information JBM gave me. I didn't adjust for wind, but I did use .5MOA as indicated in JBM for spin drift.
Loaded DUNAMIS up and sent 3.
Jeff Fisk, I couldn't be happier with the rifle you built me! Not bad for an old out of shape man.

All three of the other shooters signed the target as witnesses. 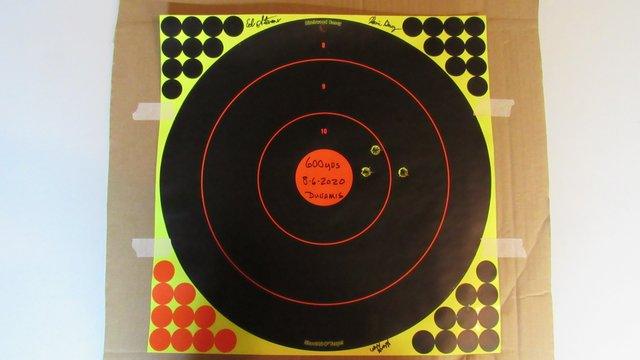 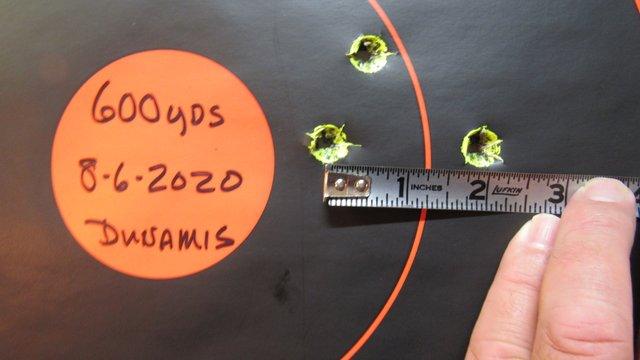 Congratulations and impressive! You been waiting a long time to check out the 8208 and it looks like it was well worth waiting for! How you gonna improve on that?

Gonna be hard to beat that on a regular basis! Nice! The critters in your neck of the woods should be worried!

muggles said:
Congratulations and impressive! You been waiting a long time to check out the 8208 and it looks like it was well worth waiting for! How you gonna improve on that?
Click to expand...

Yes sir, been waiting alright. This was only my second trip to the range this year. Today was the day. Mirage wasn't bad at all and I could actually see through the spotting scope at 600.

There's a slight difference in recoil from 8208 and Benchmark. Benchmark seems to have a crack to it, where the 8208 has more of a push.
Had a lot of fun today. Long time coming too.
You must log in or register to reply here.
Share:
Reddit Pinterest Tumblr WhatsApp Email Link