7wsm gets a makeover

This gun has been through alot of changes over the past few years. It started out as an ultimate shadow 7wsm from just before they closed the old Winchester factory. First of all, the trigger pull was horrible, 9 lbs from the factory! I was able to get that down around 4 lbs but still not great. Once I began reloading for it, things got really frustrating. I loaded several different bullets and nearly the entire line of hodgdons powder, yielding most groups around 2-3" with the occasional spectacular group around 1 1/2" at 100yards. Crazy thing is, I would wait every shot for it to cool, or shoot 5 in a row, nothing seemed to help. Then I would set it aside and shoot my 80's era model 70 featherweight 30-06 and yield a 1" group with no special effort...gun)

after much frustration, I eventually sent the barreled action to pac-nor to true and rebarrel with a 26" supermatch grade 1:9 twist #5 contour. Sure enough they returned it to me on time and as promised. My first taste of a custom barrel, so sweet. that bore hasn't seen a brush yet! The local gunsmith assembled it onto a takeoff model 70 classic laminate takeoff, nice decelerator pad and skim bedded (so-so job, must have been out of practice), and installed a timney at 2 3/4Lbs. 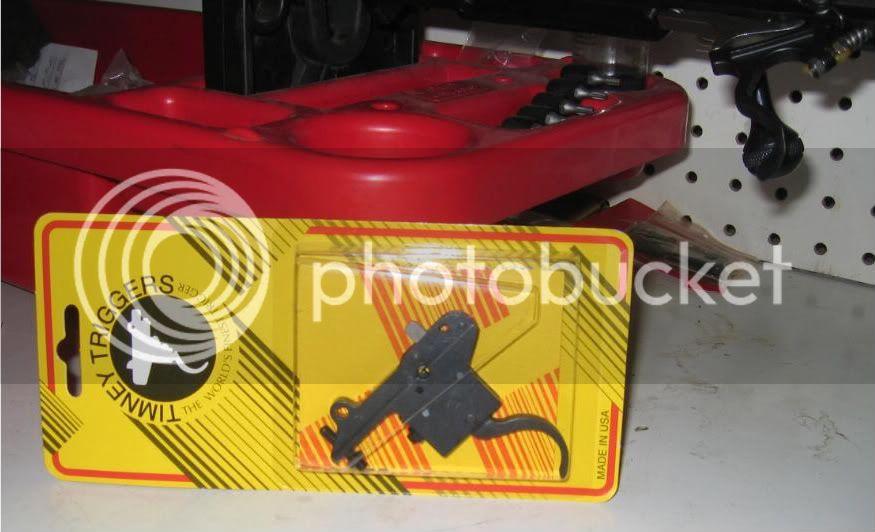 Life was good again. In short order, I had a couple nice loads worked up, that grouped at 300 as good as my old barrel grouped at 100! The extra weight helped out too, making it nicer to shoot.

After a while, my trusty 4-12x40 vx-II was looking for a new home, and a 4-16x50 burris black diamond took its place, this time sitting in heavy duty nightforce rail and badger rings. In the higher models like black diamond, burris has some wonderful glass. Like the old 7-Up commercial, "crisp and clean"... I wish I could say the same about their custom shop and warranty dept.

Not long after that, I grew tired of the classic laminate stock, with no real cheek weld and nothing to hold onto with my trigger hand while shooting, especially prone. I once again contacted Joel Russo, who I had previously spoken with about a custom thumbhole for the same gun, but eventually bought the takeoff stock, to save a buck. This time, we decided on a tactical style, A3-5L with all the works. Adjustable comb, butt hook, flush cups, pillar bedding, etc. I shipped off my barreled action last June, knowing it would take awhile to complete the custom stock.

A few months later, with September antelope season upon me, I contacted Joel about the rifle, but he was tending to his young boy who had been sick. Besides that, Joel has gotten real popular (thanks to this site I'm sure) and his backlog must have become a runaway freight train...

Alas, the "rig" was incomplete. Joel was kind enough to overnight the barreled action to me, where I re-assembled it into the takeoff classic for my antelope hunt.


Regardless of the stock's shortcomings, we did put meat on the table! In case you ever wondered how much meat you can get from an antelope, here's your answer. 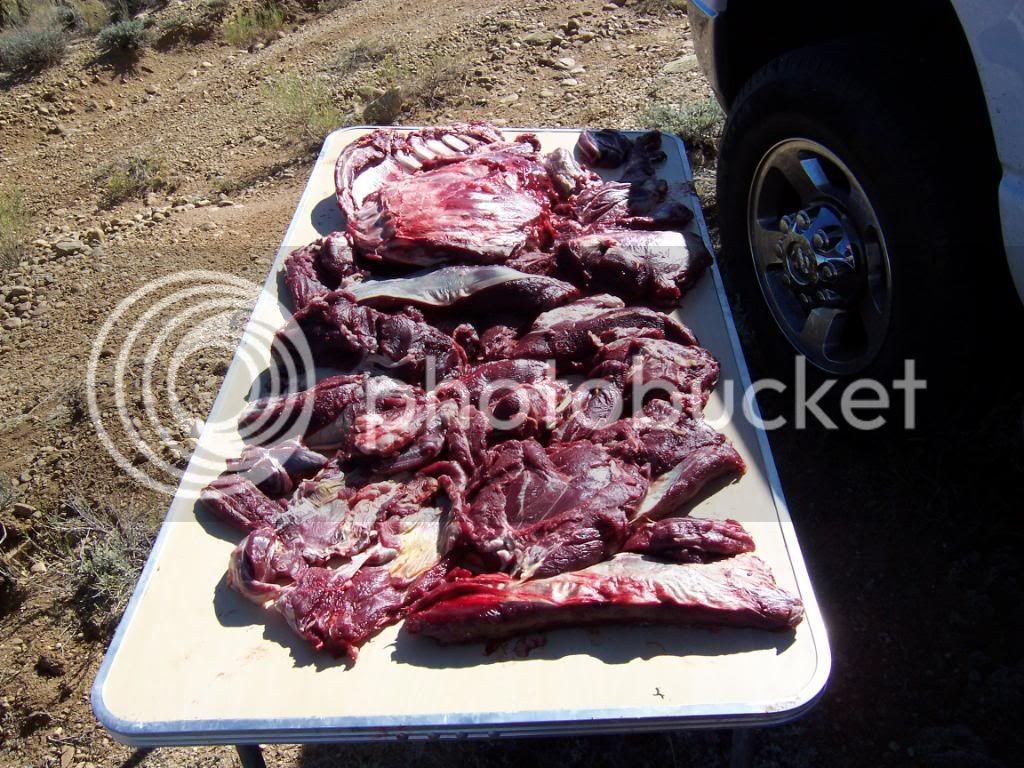 Afterwards, I returned the barreled action to Joel, to complete the custom stock. After what seemed like Eons, I received my rifle from Joel a couple weeks ago.

The stock is quite nice, wonderfully pillar bedded and fitted with a decelerator pad and adjustable comb. The bedding was real nice.

Right away, I got to the finishing work. I sanded it back down with 100 grit and found a few file marks around the wrist, butt hook and a few other spots. Worked them over until they were gone or very nearly. I removed all sharp edges that might splinter or catch. Then, I smoothed out with 120, 180, 220, 400, 600, 800. After just one coat of tru-oil sealer/filler it was already looking good.

2 coats of filler looked even better. Two weeks and 10 coats of Tru-oil later, I learned a few things. For example, don't leave the cap off your tru-oil overnight (if you do, toss it out and start over with a fresh bottle). After about a week of dry time, I completed the finish with 2 applications of stock sheen & conditioner, to knock down the excess gloss. I may still apply a couple coats of wax.

When it's all said and done, the project turned out quite nicely. I must say, at 14 Lbs complete with scope and bipod, this rig is a tank! 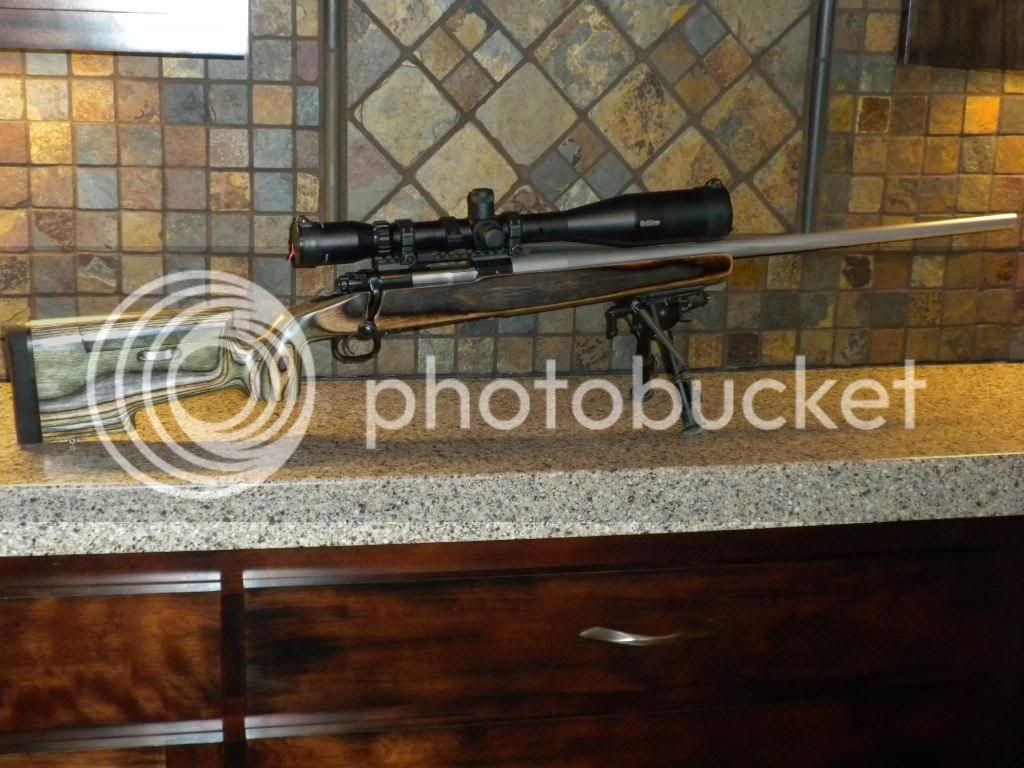 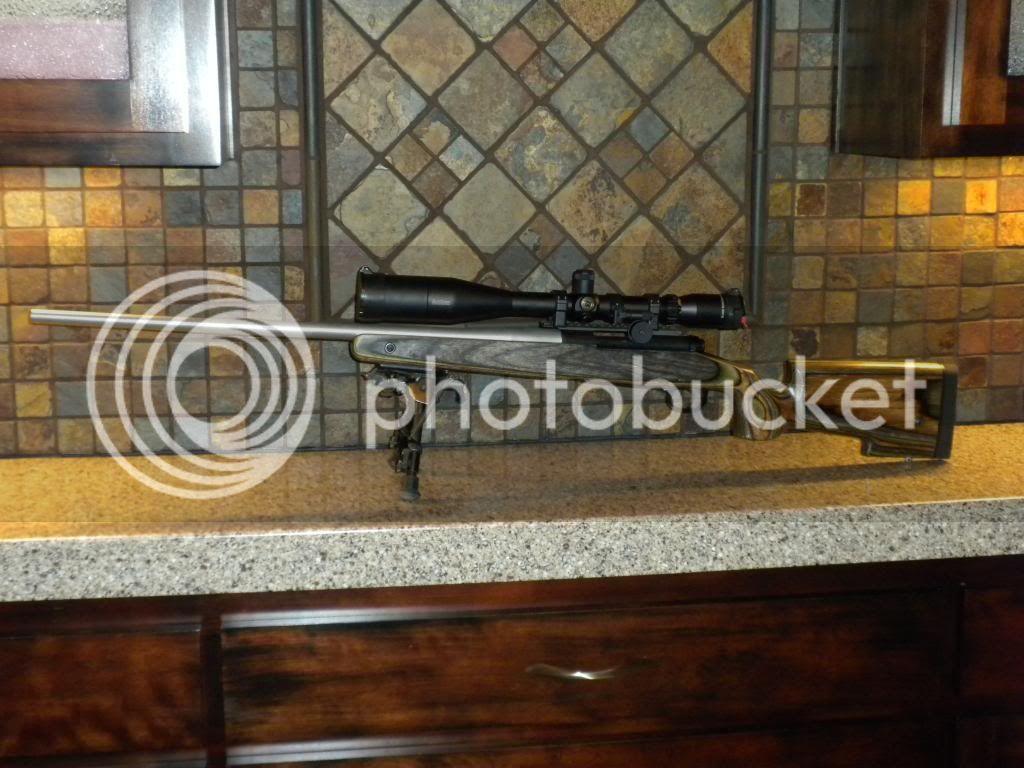 First off Im bias......I like all guns, but I love Winchesters! and that ones pretty dang nice! Great story to go with it too. Makes life good when things come together like that. Life is good anyway, but with a great result on your rifle its even better! Thanks for the story and pics.
S

Looks like it came together really well! Joel does some great stock work! GO have some fun now!
I

I love it? I was wondering just how much does that stock weigh?
L

I didn't weigh the stock alone, maybe Joel could give you a weight. I shot it today, had to reposition the scope for the new stock. Recoil is quite bearable now with the extra weight, and the rifle actually feels better balanced now too. I really enjoyed the improved cheek weld. Its got me looking at my other rifles now, maybe I should order a couple kydex cheek pieces...

open country type hunting will be fine. I'm not hauling this rig up any mountains... I've got a featherweight '06 for that...

I must have missed this thread...

Well that rifle sure looks better now than it did when it left the shop. David, you did a fine job of finishing the stock. I didn't realize the transformation that thing has gone through.

Thank you for your patience through the build, my apologies once again for the delay.
J

Glad to see it finally came together. It looks very very nice!
C

Nice story, great pics and an awesome rig. Thanks for sharing.