Any experience/ knowledge on the thread difference between the two? I bought a barrel that was chambered for a blueprinted 700 I've been wanting to mess with a 788 I have and was curious as to possibly spinning it on the 788 action. It's doubtful but hey...

I believe the 788 is the same as a small shank savage.
M

Would that mean rechambering?
M

Careful removal of the counter bore leaves the case rim protruding as a Savage. I am not familiar with that dimension on the 788. Someone else could chime in.
That being said after cutting and threading a new tenon, head spacing would be difficult, if not impossible without rechambering.
My guess is if your barrel is newer and high quality it might be worth the effort. Shouldn't cost much more than a set back/re-chamber.
There should be some more experienced pros on here to weigh in.
Randy

Farmerboy78 said:
I believe the 788 is the same as a small shank savage.
Click to expand...

You may have been thinking about the 783, different rifle than the 788.
J

This is correct.
The 788 also has a longer barrel thread (Almost 2") so the thread would have to be extended and the breach face should be cut square. The barrel threads on the 788 are quite a bit different than the 700 so they would need redoing and the chamber should be re head spaced or cut.

This should not require much more than a good clean up Like a set back.

There is also a relief cut in the 788 barrel threads for the action screw. but it is not necessary if the front action screw is cut to the correct length.

The recoil lug can be replaced with a 700 lug , if a boss is placed on the barrel shank to land it on and the rest of the shank is threaded with the smaller dia. thread.

It sounds difficult but it is not. 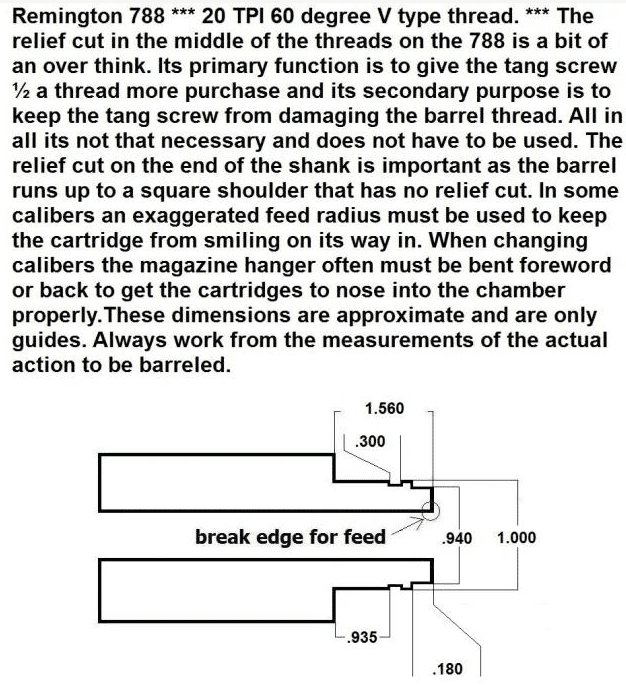 The 788 is a great action and very easy to change as long as you stay with the cartridges that It was designed for. If you change to one of the other cartridges all you have to do is change the bore diameter to the proper bore size and purchase the proper Magazine for the cartridge

The machine work is easy, but the requirements are different than the 700.

What cartridge were you thinking about ?

Well, I kinda got restless/bored/"what the hell-ed, and bought a 6.5-47 Lapua barrel off the classifieds. Been looking at the TL industries actions, but thought I might mess with the 788 a bit.
Last edited: Aug 3, 2018

Didn't put much time into thinking about it
J

JJMoody said:
Well, I kinda got restless/bored/"what the hell-ed, and bought a 6.5-47 Lapua barrel off the classifieds. Been looking at the TL industries actions, but thought I might mess with the 788 a bit.
Click to expand...

The 788 uses a single stack magazine and I'm not sure that one of the factory mags can be made to fit and feed the 6.5x47.