Just throwing this out there—does your scope rail have a recoil lug? I had a name-brand 20 MOA rail and just couldn’t figure out some POI shift I was getting. Turns out a heavier optics was causing very slight shift upon recoil. Changing to a rail with recoil lug (went with Seekins 20MOA) solved it.

a good explanation on why the numbers don't allways add up

John Spadaro said:
My scope dialed to 25 MOA shot 27.375" 25 MOA = 26.175", so my scope is dialing 4.6% high. How do apply this knowledge in a field situation? I haven't used a ballistics calculator that has this correction. I have the Sig BDX rangefinder, the Hornady 4DOF, and now the Strelok Pro.

I am amazed at what it actually takes to set up your sighting equipment up "long after" you have had to go through all the machinations of rifle/load workup. I admire anyone who can and does put in the effort. It boggles my '71-'77 "Artillery" mind! ha
C

I wish that I had access to 600y range to test my scope turrets at each distance. Unfortunately I can now only shoot at 100y until a Montana Elk Hunt in 3 weeks.

My question is what should I do to confirm accurate drops out to 500y and get good numbers to dial into my scope? If it matters I have a VX6 HD 3-18 TMOA scope.
Click to expand...

Barometric pressure settings make a significant difference in poi. I really like Hornady 4DOF app! Good luck figuring it out. Hitting high seems to be the normal
J

Here is a photo of my setup. I used a pack to stabilize the butt end. 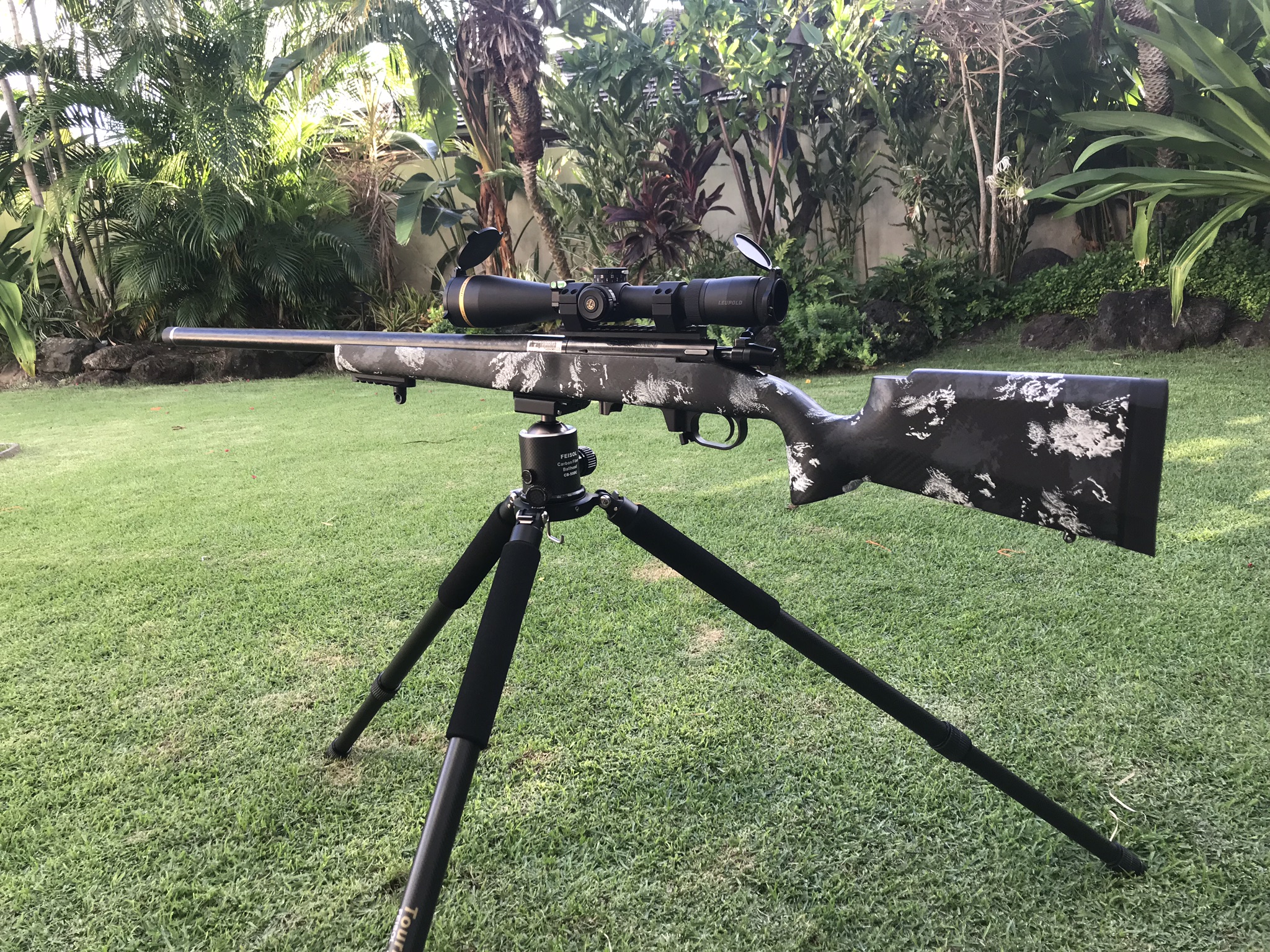 snox801 said:
First stop going by the hornady drops completely useless.
Use a ballistics app and add all your info I prefer applied ballistics. It’s very good but you can also use strelok for free and it’s good. Those will get you very close still you need to check those drops after to confirm but they are usually very close for me.
Click to expand...

Capt RB said:
When I've used the 4dof for firing solutions it can be a click off but not 2 moa when I use the bullet from their library. If your load is 1/2moa at 100yds you should be touching the line of adjustment at every line.
If your zero was with the magneto speed on shoot it again without it. The box test and tall target test will confirm if the turrets are repeatable. One common problem is the vertical split rings. If you have this style do a google search. If not order one and confirm your scope tracking
https://www.boxtobenchprecision.com/target-instructions-2
Click to expand...

I wish that I had access to 600y range to test my scope turrets at each distance. Unfortunately I can now only shoot at 100y until a Montana Elk Hunt in 3 weeks.

My question is what should I do to confirm accurate drops out to 500y and get good numbers to dial into my scope? If it matters I have a VX6 HD 3-18 TMOA scope.
Click to expand...

Secondly, I wouldn’t shoot an elk with a 143 grain bullet at over 100 yards anyway.

WiscGunner said:
The TMOA reticle is only intended to be “accurate” at max magnification. At ANY other magnification will be off and math will be required to compensate.

It is also important to note Leupold
has had issues in the past figuring out which MOA they use. In my opinion, to be confident in a Leupold, a person needs to measure the reticle click values AND measure the reticle values to see what is actually installed in the scope and IF they match. Most people know Leupolds have a poor track record of accurate clicks but the math gets thrown right in the trash when your have an MOA reticle and Shooter MOA turrets (with error). When the OP knows these things for certain from testing himself then he can decide what to do (ignore the error, record the offset in the APP or get a new scope).

All too often assumptions are made that longer ranges are just a click away, and they can be but only if the correct data is used and not assumed.


Hopefully the OP can get it figured out.

As ForgivenALL, BC needs to be trued more than velocity. The Magneto Speed has an error of up to .5% or 15fps in this case. Start with this as a given and adjust the BC (correctly entering G1 or G7 value) to more closely match your trajectory. Beyond 1000yrds the muzzle velocity will also need to be slightly tweaked.

The OP has not said which bullet/BC combo he is using but I am sure if he does plenty will chime in with data that worked for them. Some manufactures like Berger, Hornady and Sierra provide fairly accurate BC’s that only need a little tweaking to compensate for muzzle velocity (BC changes in flight), muzzle break, barrel (bore size, rifling, chamber). Other brands need major adjustments to compensate for the optimistic marketing of BC’s


As the OP is now aware, the powder will produce different velocities at different temps. This temp data should be used to build separate “rifles” in his APP to be used in corresponding weather.

If all other data such as scope height over bore, actual twist rate (can vary) and bullets dimensions are input in the APP correctly then the last assumption to remove from the data is weather. I highly recommend the WeatherFlow wind meter for under $100. It works with several apps such as Hornady 4dof but I prefer the user interface of BallisticsARC (free).
Click to expand...

Interesting thread. If you read enough different threads on different forums, you can find more info about guys who had tracking issues with their gold L scopes. Then again, you can pretty much find whatever you want to support your position - it IS the internet....

This type of issue is a reason I went to mil/mil scopes that have stellar reputation for tracking and RTZ.
L

Daddyneuf said:
Why would you zero at 100 yards when your desired target is an elk? I’d be 3” high at 100 and I’d have a shot where I could hold dead on to 400 yards, given the kill zone for an elk.

Secondly, I wouldn’t shoot an elk with a 143 grain bullet at over 100 yards anyway.
Click to expand...

First of all how many elk have you killed?
Second Deer and Elk are open at the same time here in Montana some units close mule deer Nov.15th. So I guess your good with a 9" drop at 400 on a deer being 3" high at 100
J

Bill Cauley Jr said:
Magneto speed on your barrel definitely changes point of impact I have one this is how I know
Click to expand...

Yes, on my barrel the Magneto Speed shifts the POI up 2 MOA and to the left.

John Spadaro said:
Here is a photo of my setup. I used a pack to stabilize the butt end.View attachment 156219
Click to expand...

Now that you have the scope adjustment figured out that makes hitting at long range much easier. I was playing with my isnipe app and can’t quite line up with your measured drops, but I can get close.

When you look at what group sizes would be using your 1/2moa groups the 300/500/600 actually line up fairly well. The 400 would be an outlier. To get closer calcs I would need you scope height and actual air pressure.

With your actual measured drops, and knowing what your scope actually adjusts you should be able to make hits out to 600. I would try and do some paper shooting before game but you are fairly close.
Share:
Reddit Pinterest Tumblr WhatsApp Email Share Link