highdrum said:
@Longtooth32 what did you change in your rifle to get a longer magazine box to fit up to 3.7 coal? Thanks......
Click to expand...

Now I am thinking about a .257 Wby in a fast twist now that the quarterbore heavies will be coming out...do not feel like dealing with finding throated reamers in 25-284...unless Blackjack...
Last edited: Jul 1, 2018
L

Well, I put her together today...

The Pac-Nor barrel as above.
Pic of the 150s for tomorrow...

Well got out and shot some today...it was a good practice with dry firing with live ammo in the chamber...

Anyways...known problem with the Nucleus action with a light firing pin spring of 16 lbs...ARC sent me a 19 Lb spring for no charge...I am shooting "thick" Russian mag primers...

Finally got some data points and I have to pull about of 20 rounds of ammo because they would be way too hot.

I was not getting any of the usual pressure signs with this Nucleus action. Then it suddenly locked up with the next one grain increase in powder. I actually had to kick the action open with the rubber sole of my boot.

But holy cow the barrel was putting down some impressive speeds.

The rifle was shooting this target (yes, I biffed one) @ an average speed of 3427 fps with an ES of 27 from 10 rounds, and then it locked up with one more grain of powder from this load.

Again, bipod and rear bag out of the back of my pick-up. Lased 101 yards. 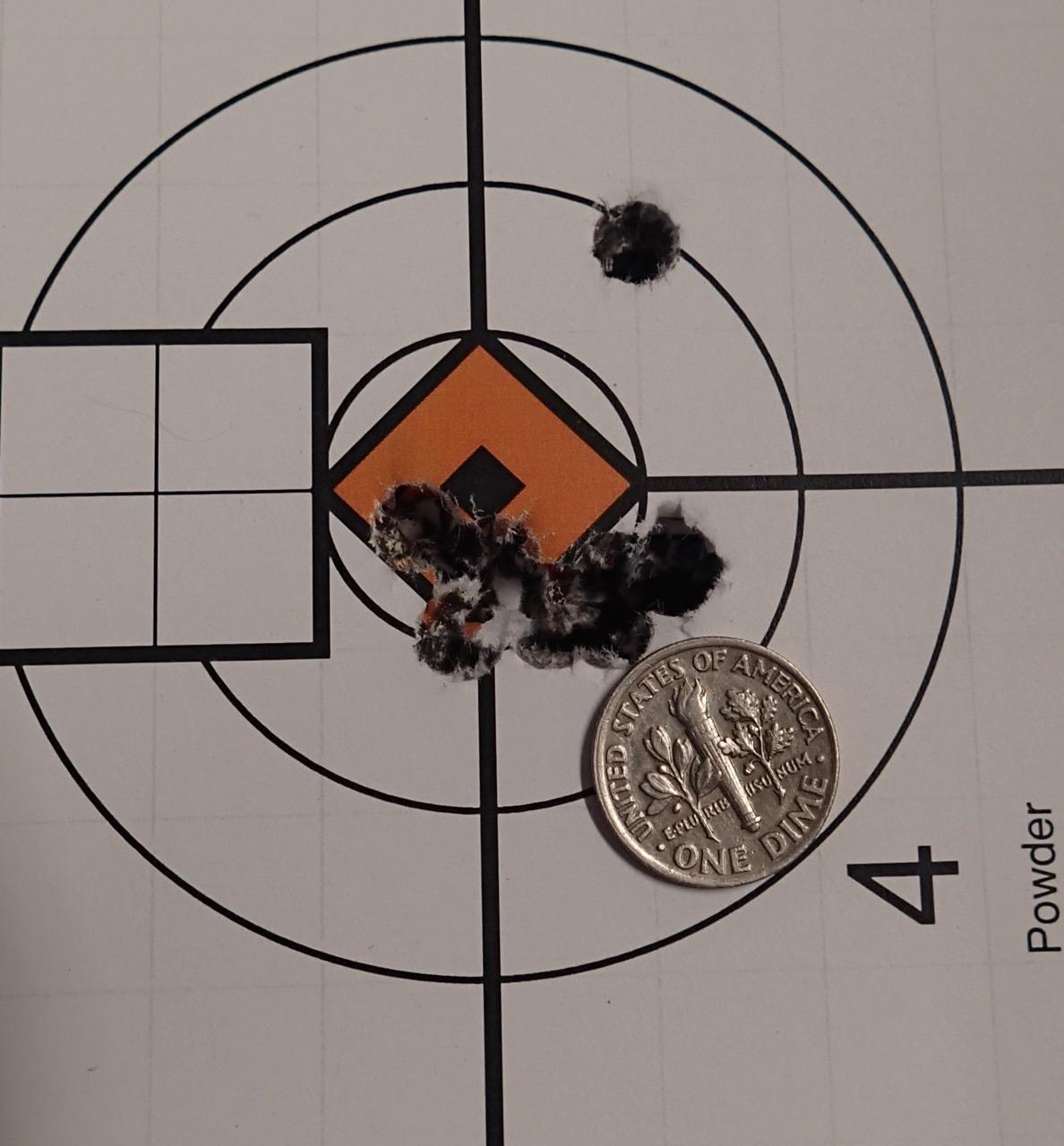 If I step down the powder by two grains from the above load I still get an ave speed of 3372fps with an ES of 8 for 5 rounds.

What kind of speeds can a reloaded 26 Nosler put down? 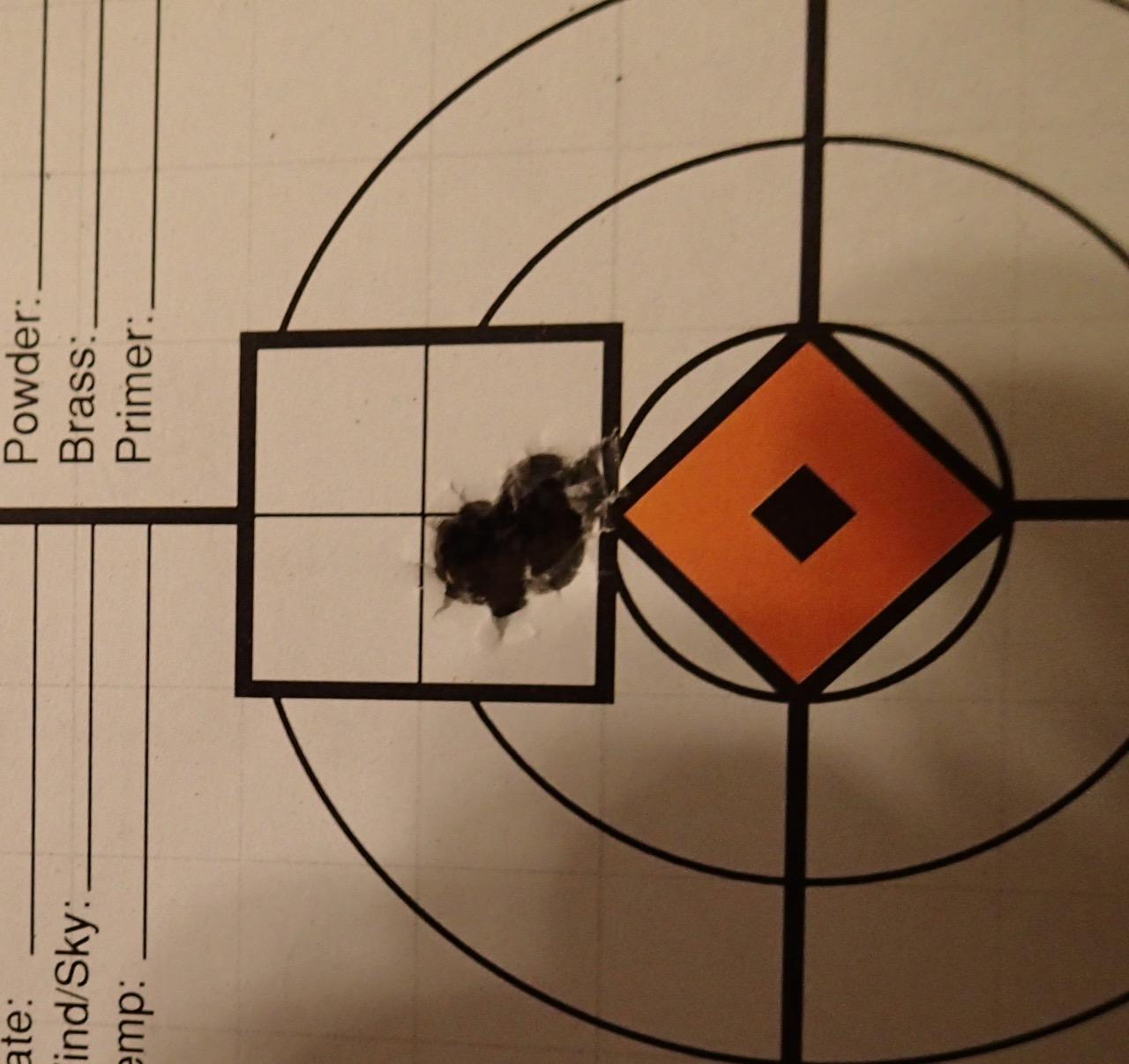 I just went to the Nosler 26 reloading data page...

Hi,
I have started a 6.5-7 mm weather project a bit more than a year ago.it has and still is a very big frustration for me.
I first talked to Dave Manson and got a reamer ground for shooting the 147 gr eldx.
Neck diameter is at .295 and free bore is at .180 .i specified that I would be cleaning up the neck of my cases by doing a light neck turn.loaded round is .290 of neck diameter .

I got suggested to go with a slower powder so I then tried retumbo, with the 147, starting at 62 grains. Again first round blown up primer.
I tried rl33 with 59 grains behind the 147 grains, again blown up primer.

So today I went to the range again, I had loaded some 123 sst with retumbo going from 67 ,68 and 69 grains. Recording speeds were 3228-3292-3316 respectively. Primers were slightly flat but bolt was easy to lift up with no marking on the brass.i will pursue in that direction.
I had some 147 loaded at 59 grains with the bullet seated deaply so as to increase the distance of freebore to the rifling. And that one blew up a primer as well , speed was 3182.

It seems that using the 147 in that rifle is a disillusion .
Hornady published the following data for the 264 win mag with the 147:

I was trying to think what would cause so high pressure:
The barrel has a bit of fire cracking just after the throat, could that create too much friction and increase the peak pressure?( I have polished the beginning of the rifling with jo bore paste to try to smooth things out).
I have heard of batches of weatherby / Norma brass being too soft. Could that be the case with that batch?
I have dried out the inside of chamber of any oil and made sure that the brass was clean as well.

Is my neck clearance enough?
How fare from the rifling would you suggest that I seat my bullet to minimise pressure?
Is my throat too short?

For those on the forum who use the 147 in 6.5 Prc or other magnums ,do you guys have any issues with over pressure?
Is the long bearing surface of that bullet the issue?
that is a good lot of questions I have asked around but I haven't got a clear answer so fare.
If anybody here could help that would be great.
I am not that new to reloading, having played with more than a dozen calibers over the last years from 204 ruger to 505 Gibbs including 243,6.5 creedmoor, 308, 300 wm, 458 socom among others.
But it is the first time that I have so much trouble with one cartridge.
E

I must of missed a time out limit...stuff was deleted...

This chamber should have an about .357 freebore...

Sorry for tagging a necro thread but i’m looking at this same build but using necked up 257 Wby brass.
D

What magazine do I need?