Eastern Montana has one little district that you can use your general elk tag in because there isn’t enough public land to actually do a draw for. Today while deer hunting some state land I got lucky and stumbled on to a bull at 52 yards. First shot with the 156 grain berger out of 6.5-06 hit him behind the shoulder. He turned quartering away and I hit him again and he flipped over backwards dead. Totaling about 10 yards of movement from first shot. Berger made soup out of the lungs and peppered the offside rib cage. If he had slid 10 yards the other direction he would have ended up in a sink hole I couldn’t see the bottom in. 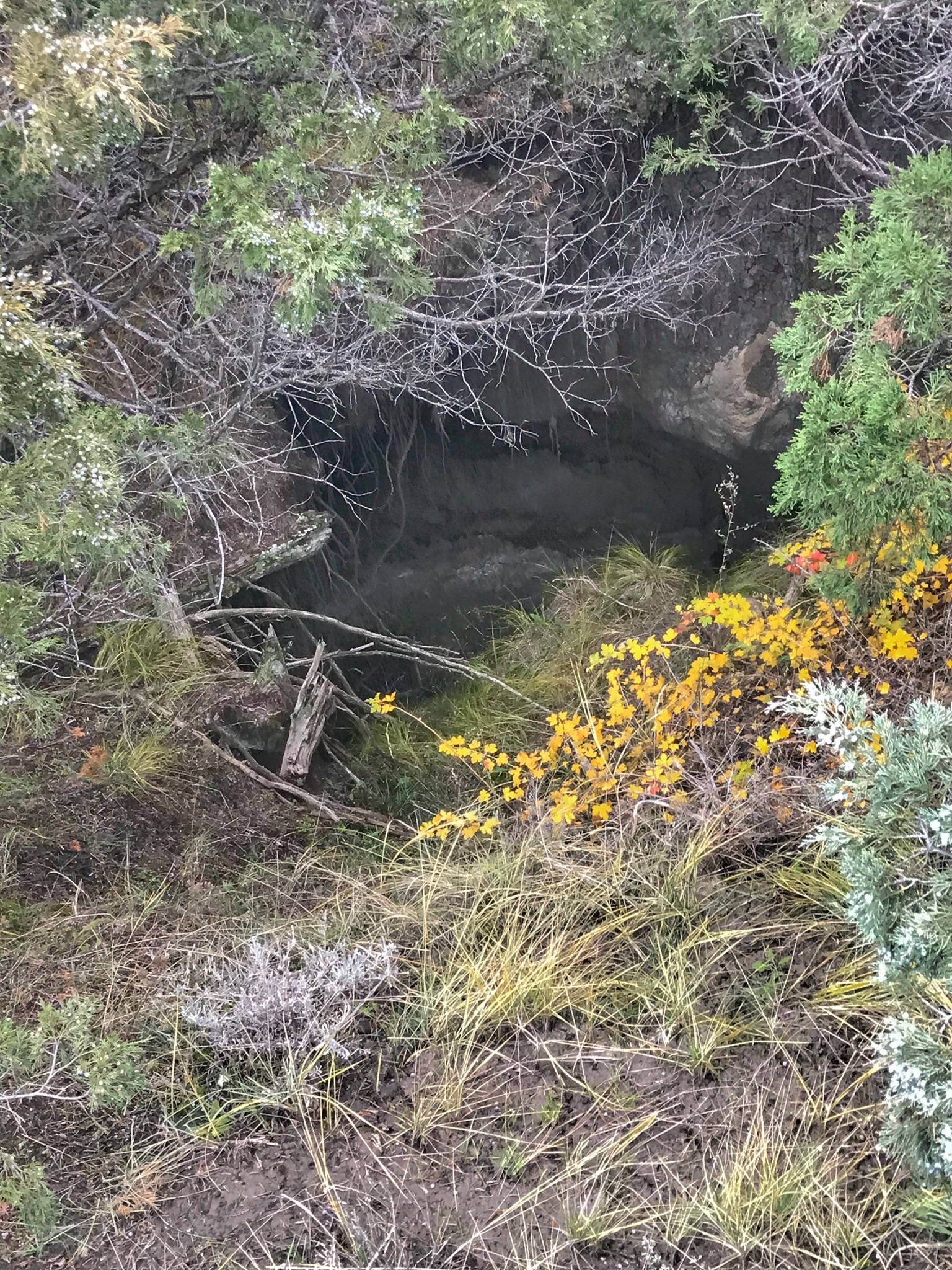 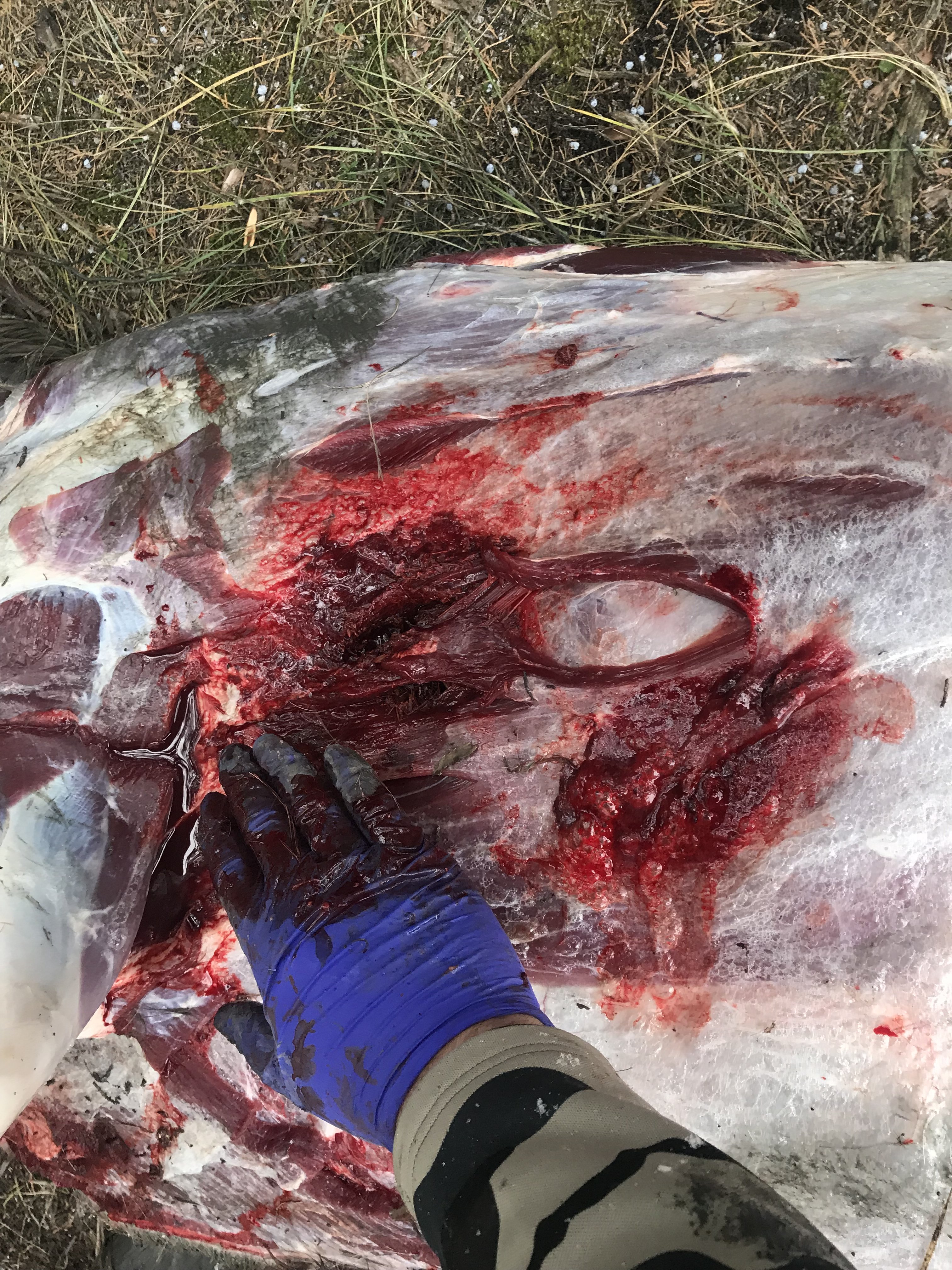 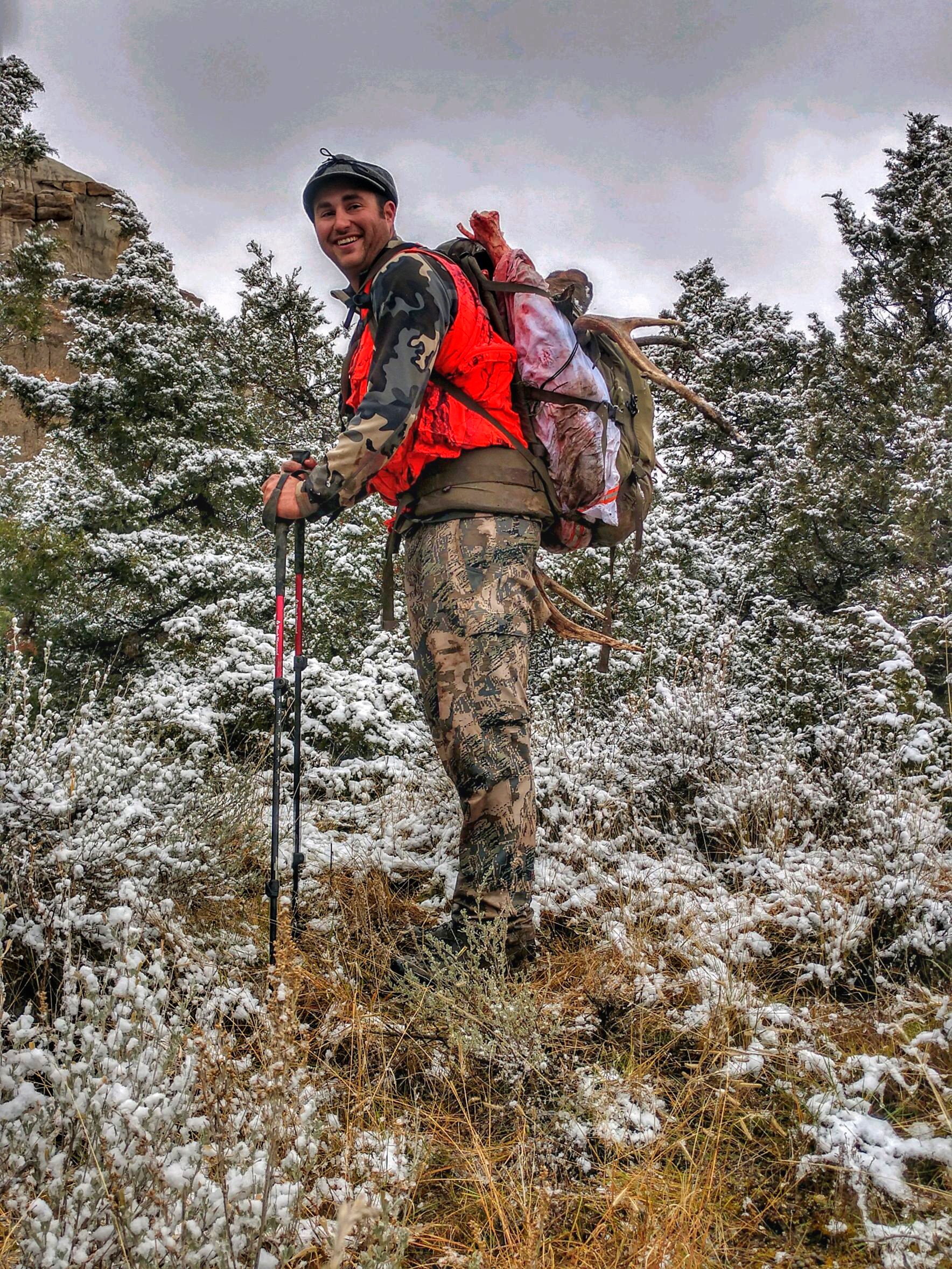 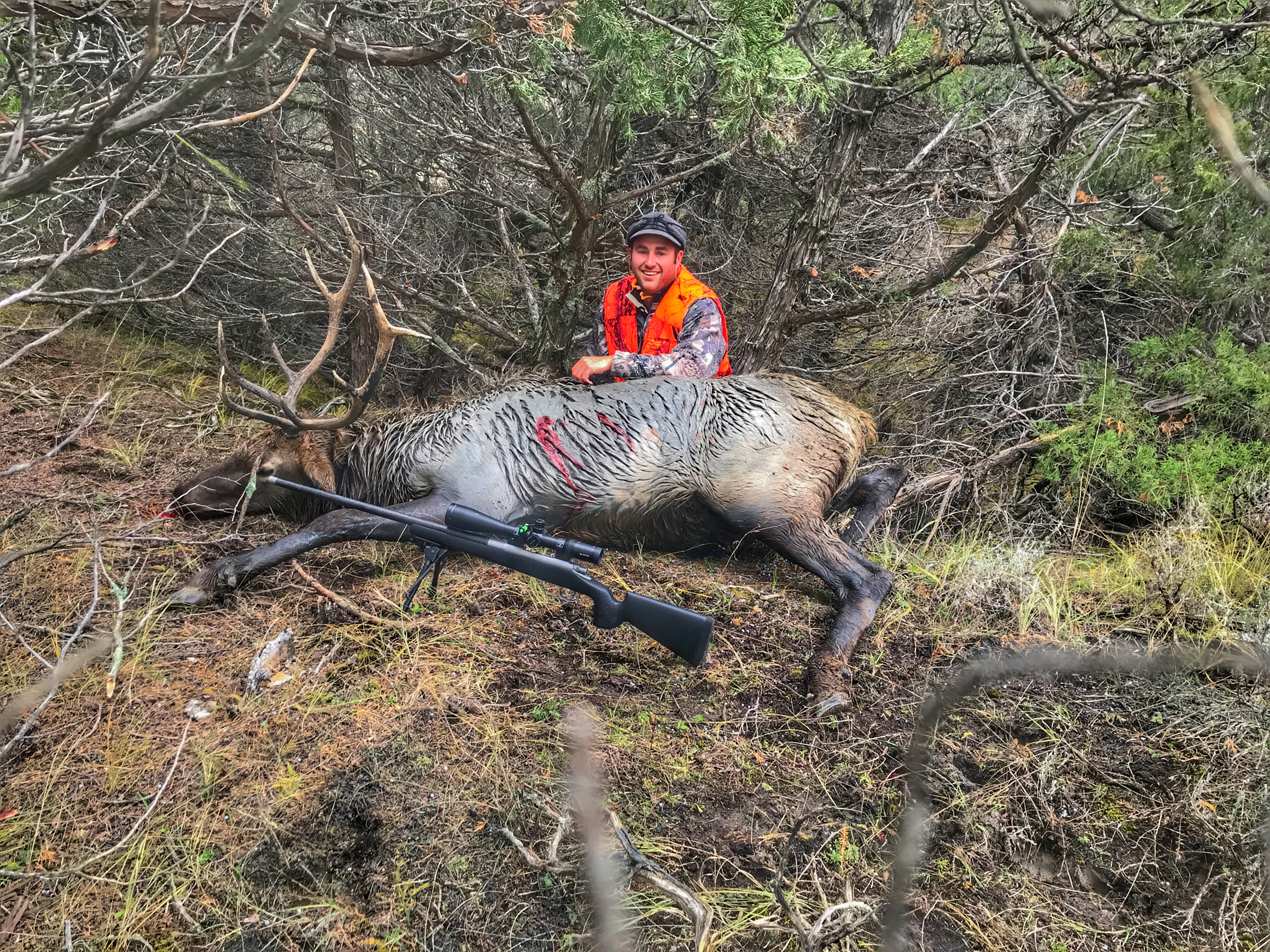 codyadams said:
I am right there with ya. Have my complete barreled action/brake, bottom metal, trigger, base/rings and scope and all components/dies for a .338 Norma build. Waiting on the Manners stock I ordered April 15th....
Click to expand...

I found that the 143 ELD-X likes to be almost touching the lands (within 0.010") - The closer the better. This improves the accuracy over the factory Hornady ammo with the ELDX.
S

My cousin and I were fortunate enough to harvest three antlerless elk this morning from a group of 4, two cows and a calf. My .260 AI was used for 2 of them, one at 865 yards and the other at 840 yards. Wind conditions were essentially non existent. The calf was taken with a .270 Sherman and the 170 EOL, but that is for another thread.....

The first large cow at 865 was a high shoulder
/lung hit, and it dropped her in her tracks, and tumbled down the very, very steep mountain and eventually wedged hard under a log....didn't get a lot of photos of this one because we have to work tomorrow and had 3 elk to get down 900 feet elevation/and a half mile to the truck and only two of us to do it. We were a little rushed. Bullet was under the hide on the off side, did not exit. This was a very big cow, and it dropped her and with both lungs destroyed and jellified, she wouldn't have gone far if she didn't drop from shock to the spine.

The second cow at 840 was probably a 2 year old cow, pretty big but not as big as the other one. The shot was perfectly placed, it was a quartering forward shot and literally went through the heart, as you will see. Went through the entrance side shoulder joint and blew the heart up and jellied the lungs. The bullet didn't appear to exit even the ribs on the off side, blew up in the vitals, the ribs didn't appear damaged, but the cow ran literally 8 yards and then tumbled down into a tree, maybe 5 seconds.

These shots were pushing the limits in my opinion for these bullets on elk, roughly 1440 and 1470 ft-lbs and going 2040 and 2060 fps at impact, but they still killed both elk very effectively and did extensive damage, just didn't exit on either, though it wasn't needed in this instance. Seeing the damage they did, I wouldn't hesitate to use them on elk again. 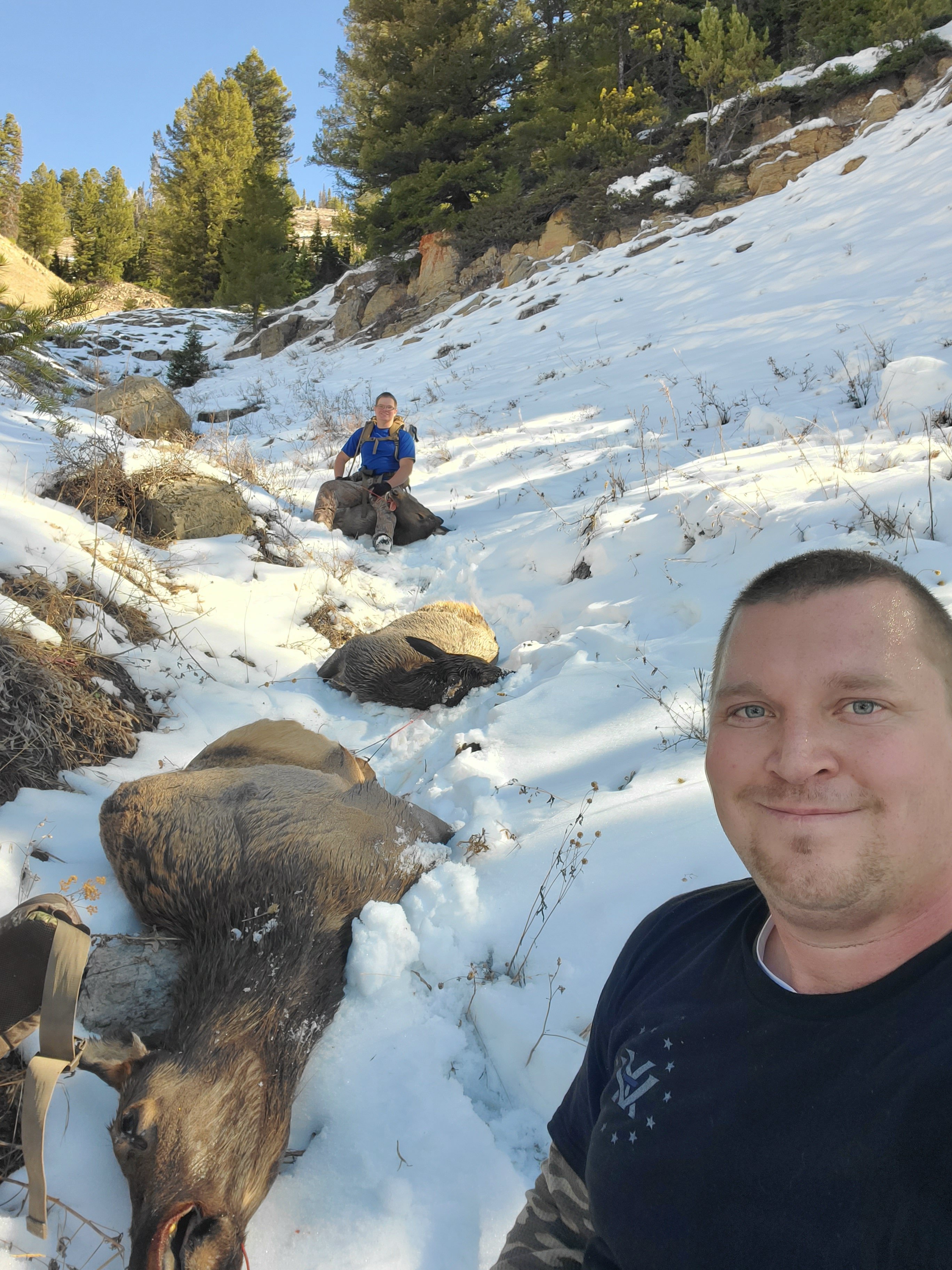 A quick video of the internals from one elk....

What is your oal for the 156? Mine is at 3.075 with a small jump to lands. Not sure I could run that hot in mine. Though I may go up a bit based on that. Nice shooting.
You must log in or register to reply here.
Share:
Reddit Pinterest Tumblr WhatsApp Email Link