TAWS said:
That muddied the water a little as I remember now that you can buy 6.5X280 ack. Imp. brass may have to rethink this!
Click to expand...

Where can you by 6.5x280 ack imp brass? That sounds interestin!
H

DocDoc said:
A gain for me from the .260 AI is almost never have to trim the case length. The added velocity is nice and helps cheat the wind.
Click to expand...

What size action are you running that 260 AI throug? What kind speed are you gettin?
L

brian11 said:
Not only is 30-06 brass more work & trouble, it also comes out a tad short after the shoulder gets puffed out.
Click to expand...

Explain to me what the tad shorter neck hurts. Nothing if you stay up on the carbon ring like you should on any rifle.
I'm using Lapua 06 brass in my nephews 6.5x06AI and is an absolute hammer with H1000 and 140 Bergers.

Edd said:
You said you have years of 25-06 brass. If any of that is fired, seat a 6.5 bullet into it and you will realize how little you are going to have to stretch it.
Click to expand...

Not much at all so I guess I will use the 25-06 brass. Thanks for the tip. I had done a lot off measuring and working with spec’s but didn’t think about sticking a bullet in a fired case.

harps said:
Where can you by 6.5x280 ack imp brass? That sounds interestin!
Click to expand...

Graf and Sons for one. Nosler is pricey. Sportsman's Warehouse.

L.Sherm said:
Explain to me what the tad shorter neck hurts. Nothing if you stay up on the carbon ring like you should on any rifle.
I'm using Lapua 06 brass in my nephews 6.5x06AI and is an absolute hammer with H1000 and 140 Bergers.
Click to expand...

antelopedundee said:
Graf and Sons for one. Nosler is pricey. Sportsman's Warehouse.
Click to expand...

elkaholic said:
If you use '06 brass, you will end up with brass that is .015" shorter than it should be! This can cause carbon ring build up and other issues that can be avoided by just using 270 brass in the first place.
I would never use any 06 length brass to foem an A.I. or a Sherman.
Click to expand...

What other issues besides promoting carbon ring formation would too short of a neck cause?
C

TAWS,
Not sure if you've received a reply or not on your question (have not read the entire thread yet) but I use both 25-06 and 270 Hornady brass. I have found the neck wall thickness to be the same regardless of which one I use. "I think" Hornady uses the same "blank case" to make those two because the neck thickness is the same after being necked to 6.5.

I have two 6.5-06 rifles, had one for a three years...the other is a Savage self build that I just completed recently. 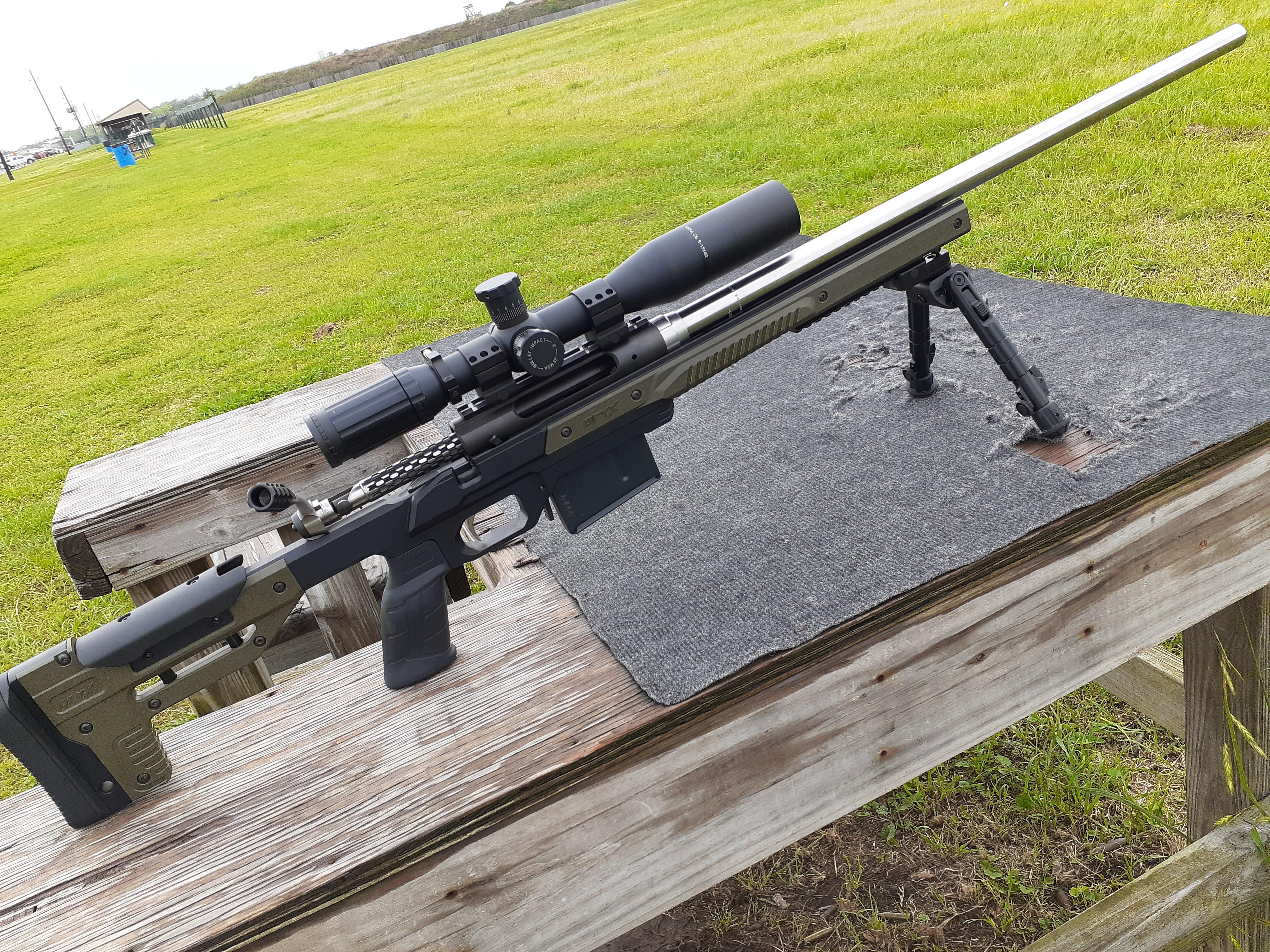 Here she is sitting on the 600 yard bench.

Go ahead and make it an AI. You're going to be mostly making your own cases anyway, but with the AI, you get more performance while only having two steps to fireforming AI brass, the first of which allows you to use the 6.5 06 at full house loads while making AI brass. However, if you want a Gibbs type casing, that just takes a little more work with the fireforming.

brian11 said:
So, to answer the OP, AI is a bit more work, and probably should be done with 270 cases only, while the non-AI is a bit less work and can use any of the 3 cases, probably 25-06 being the easiest, as no length trimming needed. Thus far in my load development, I'm not even filling non-AI cases, so being AI is not a gain for me, at least not yet. I've only just begun my load development, although I now have 100 fully formed cases. I found that, even during fireforming, accuracy is excellent.
Click to expand...

Here's something I just came across, so I submit it here as a followup to my previous remark. I think I mentioned something similar in an earlier post on this thread, too. It's about what I was questioning about the need for the expanded AI case. While I'm still early in my development of load data for this cartridge, I am not filling even the non-AI, unexpanded case. I submitted earlier a list of the percent-full of various MAX loads and they weren't even at 100% for the unexpanded case. The only reason for blowing out a case into AI is to get more powder capacity. So if your case isn't full before the case shoulder gets blown out, it seems to me there is no point in blowing it out in the first place.

Now, in my case, I have to blow it out anyway, because that's what the chamber is in the rifle I bought.

However, I just bought a subscription at loaddata.com, and I was perusing some of the wildcat calibers I am fooling around with right now. There were several sets of load data listed for the 6.5mm-06. One I looked at had this very interesting tidbit of info:

Warning! Notes: Standard twist: 10". Special twist: 12", 14". The 6.5mm-06 Improved, sometimes called the .256-06 Improved is obviously not as efficient as the standard 6.5mm-06 which tends to indicate that the maximum efficient case capacity has been reached and that the 6.5mm-06 Improved is somewhat over bore capacity thus resulting in not quite as efficient cartridge as the standard version. The following loads bear this out because these were made in the same barrel, by first chambering the barrel for the standard 6.5mm-06, then later it was rechambered for the "improved" version so that a good comparison was obtained for the two cartridges in the same barrel. (Handbook for Shooters & Reloaders/Vol. 1 - P.O. Ackley, 1962)

According to this info, even PO Ackley himself discovered the same thing way back in 1962 that I was saying; if you aren't filling the standard case, then there's no point in having a chamber that blows the shoulder out for more powder capacity.

Another data point for the OP to consider.

So, you guys shooting the AI or other blown-out cases - are you in fact putting more powder in them than the original, non-blown-out case would hold? If so, then I can see considering the improved cartridges, otherwise I don't see the point.
L

Every AI cartridge that I have loaded for has gained me atleast 100fps over the parent case and I know some are gonna say well the animal isnt gonna know.
On your list of percentages 165 is the slowest at 91% I run H1000 in my nephews 6.5x06AI so I know the case fill is over 90%.
Your using Nosler data as an example so theres shows the 6.5x06 at 2900 with VV165 as the fastest I'm running 3150fps with H1000 in 6.5x06AI.
Then theres the equall pressure arguement, well nobody on here has the equipment that I know of to back that up it's all speculation.
I cant stand trimming cases and this is another advantage an Ai case has.

L Sherm is correct. The reason i went to AI 40° cases years ago was not so much velocity increases ( which vary cartridge to cartridge), rather, it minimizes or stops case stretching. I haven't had to trim my AI cases in a long time