Anyway, this rifle is one of my Standard Stalker Hunter rifles. This is a mid weight rifle at around 10 pounds bare rifle weight. Not designed to be an all day packer, more a jack of all trades type rifle. Most healthy mature male hunters could pack this rifle better part of a day in most terrain yet feels just as at home in the tower overlooking a big field of set up on the rim of a canyon giving you legit 1000 yard reach. Have been making these for years and most of you are very familiar with them. Very popular selling rifle for me out of the shop. 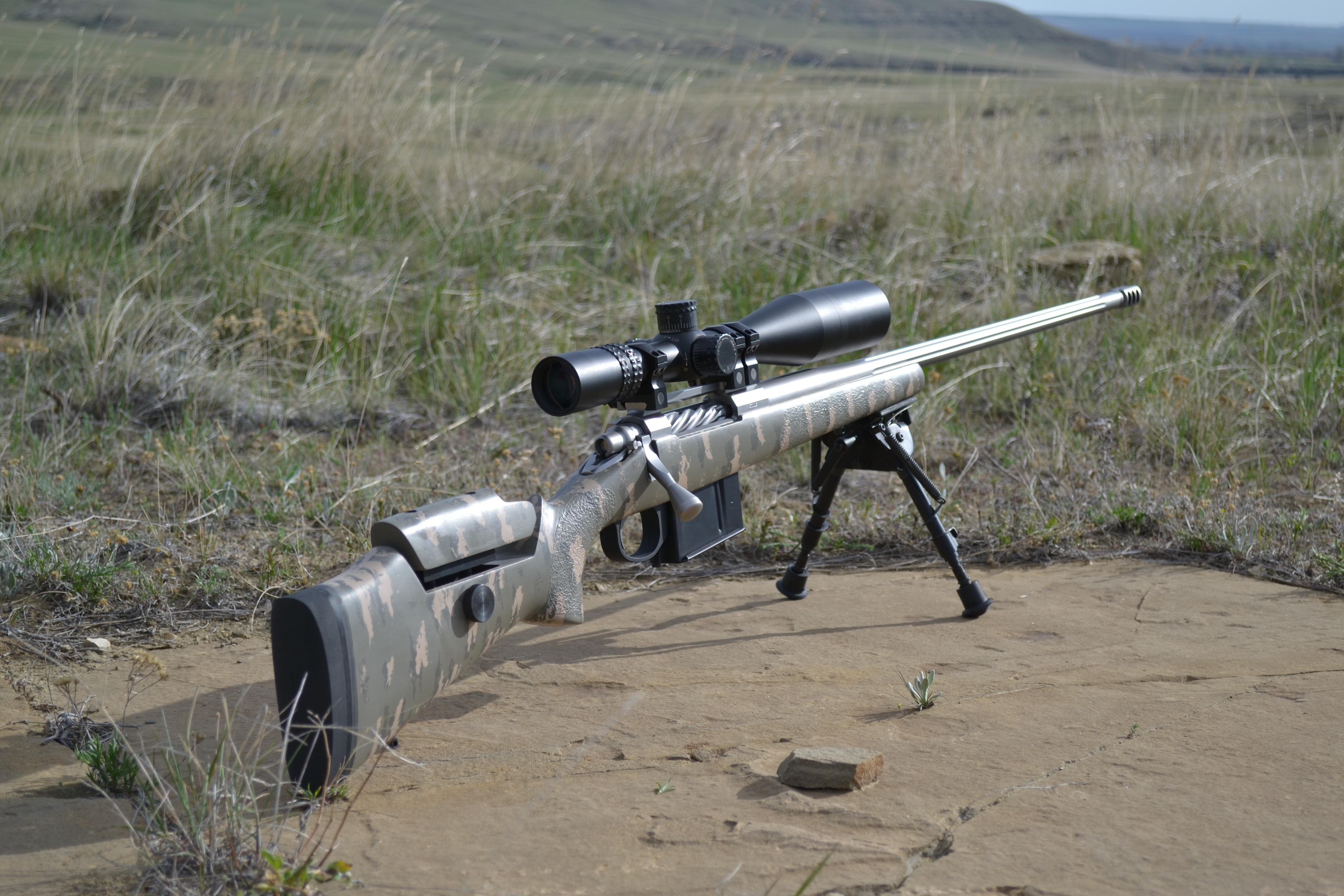 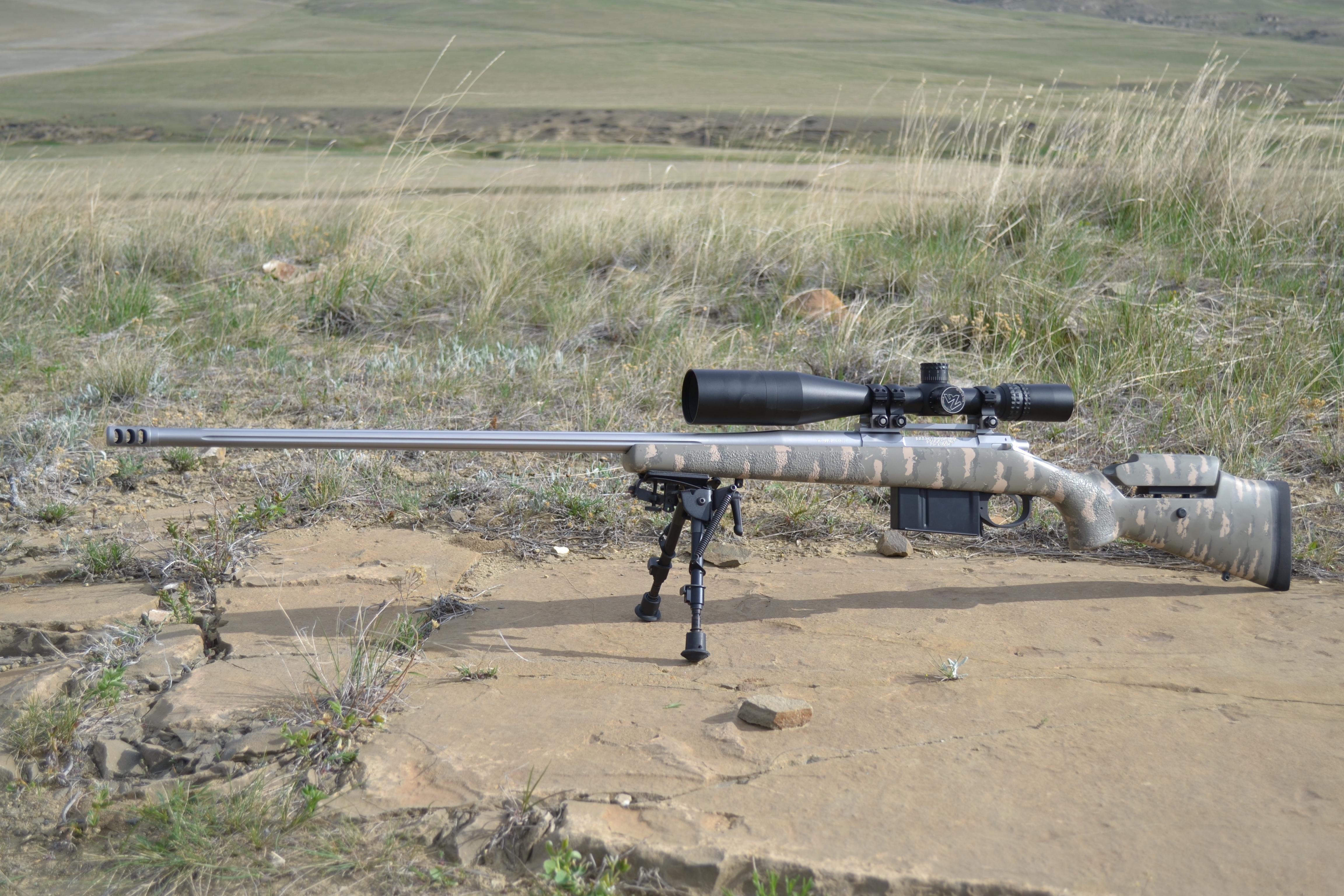 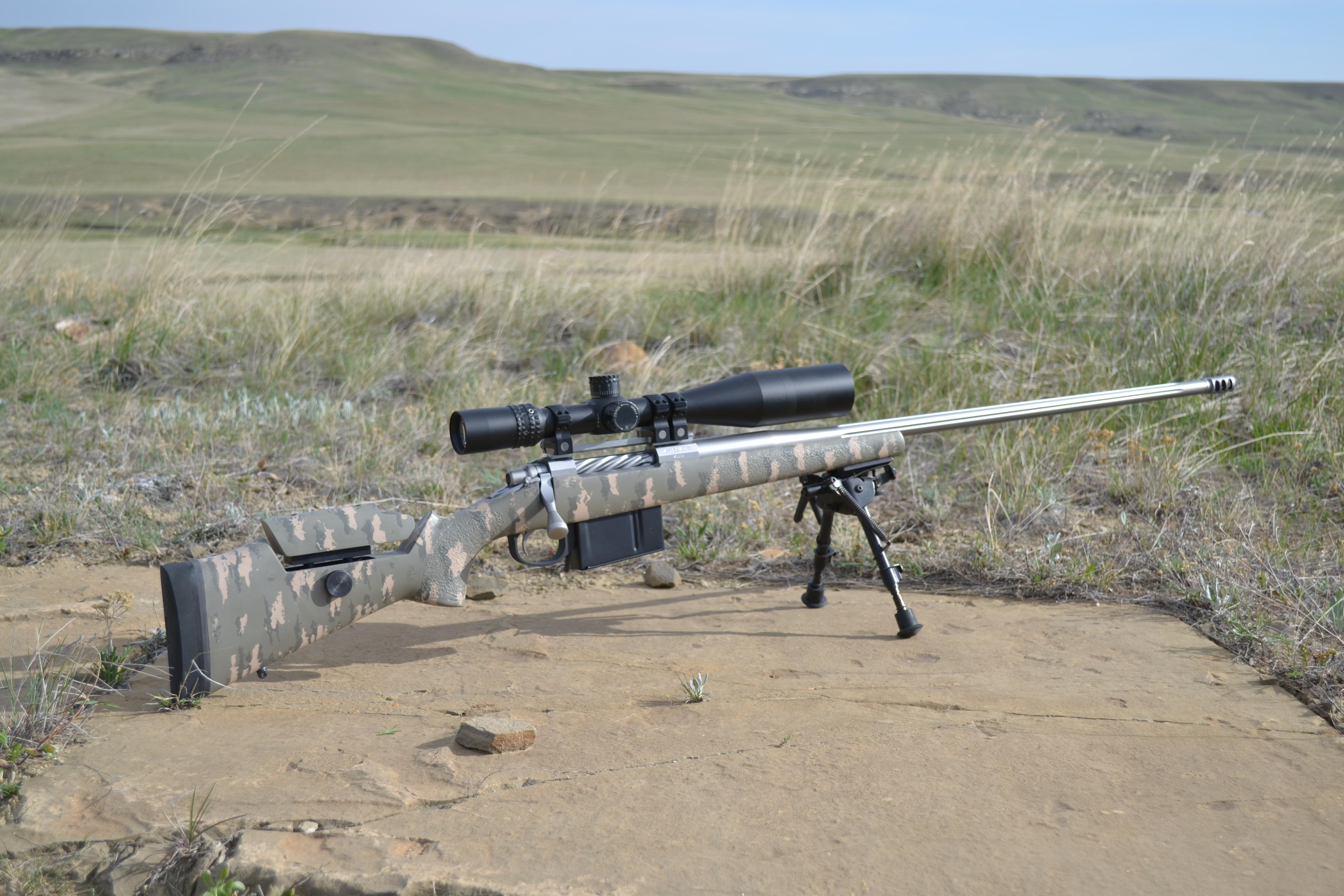 The reason I am posting on this rifle is more for the chambering then anything else. This rifle is kind of unique in that its chambered for my 375 Allen Xpress wildcat chambering. Not a new chambering, in fact its been around for as long as my 338 Allen Xpress wildcat but since its a more specialized design, just do not chamber as many rifles in this round as I do its smaller caliber siblings all of which are based on the 338 Lapua parent case.

That said, the 375 Allen Xpress has always impressed me with its efficiency and ability to produce very good performance numbers for such a relatively compact package, and do so with a VERY long barrel accuracy life.

The customer that ordered this rifle decided he wanted to have the rifle tested with two specific bullets, the 260 gr Nosler Accubond and the Cutting Edge 320 gr. MTH. As you can see, this rifle is a repeater so the customer wanted to choose bullets that would function well as a repeating rifles. He had wanted to use a CE bullet so after doing some research, the 320 gr MTH was the heaviest bullet they offered that would still fit in the Accurate Mag DSSF system. And it JUST fits!!!

I started load development with the 260 gr Accubond as I had some past load data results using this bullet in the 375 Allen Xpress.

In those tests, Magpro produced great results so I started there again. In this rifle we topped out at a very nice 3305 fps average with very good top working pressures. That load development was relatively quick and easy.

The adventure came when doing load development with the CE 320 gr MTH bullet. This bullet, for a CE bullet, actually has a relatively long body length which would need to be seated deeply in the case to seat the gas seal band to the recommended position and also to fit into the magazine.

Velocity with the 320 gr and Magpro was at 2965 fps when I stopped increasing powder charge, again, not because of pressure at all, but because of load density going higher then I like.

I then switched to Ramshot HUNTER powder. This is a powder that I have used with great results in the 375 Allen Xpress when loading the very long 350 gr Barnes TSX bullet and it has produced good performance numbers as well with the load density I like.

However, in this test, with this bullet, again, I ran out of case capacity before reaching top working pressures. Velocity with top load was 2980 fps. Good but I felt There had to be more since I was not pressuring out, I was running out of capacity.

Obviously this bullet, used in a conventional throat design was flattening the pressure curve enough to allow for the use of much faster burning powder, which IS an advantage of free bore designs.

Looking up at the selection of powders I had on the rack, I grabbed a bottle of H4350 and gave it a try. This powder I would have thought would have been way to fast in burn rate for this combo and I was able to max out in pressures in the 92-94% load density range and at 2945 fps as well so yes it was a bit to fast.

Finally I decided to give Hodgdon Hybrid 100V a try. I have not used this powder A LOT in the past but when I have used it, I have been impressed with it. Well, I was very happy to see that at a 99-100% load density this powder produced 3100 fps and good chamber pressures. I loaded it up to 3150 fps with some compressed loads and that is where pressures peaked so pressures were perfect at 98-99% load densities and great 3100 fps velocities.

A bit of explination as to WHY I do not like compressed loads, years back, I had loaded up some ammo for a 7mm Allen Magnum rifle. The loads used a mildly compressed load and when loaded were very comfortable in chamber pressures. Those loads set for nearly a year and the next time I shot them, the pressures were extremely high, heavy ejector rings on case head, heavy bolt lift.....

Pulled the loads and found that the slightly compressed powder charges had turned into a solid block of powder. I actually had to take a small screw driver and break the powder loose so it would come out of the case.

Seeing this, I grabbed some other test loads that had been sitting for much longer but that were loaded with a non compressed load. Pulled the bullets and the powder poured smoothly out of the cases.

Now the 7mm Allen Magnum is an extreme little monster and this likely would not cause as much of a problem in a 338 Allen Xpress and likely not at all in a 375 Allen Xpress but it has just now become my standard to try to develop loads for customer and my rifles that produce top velocity, top working pressures and in that 98-99% load density range. 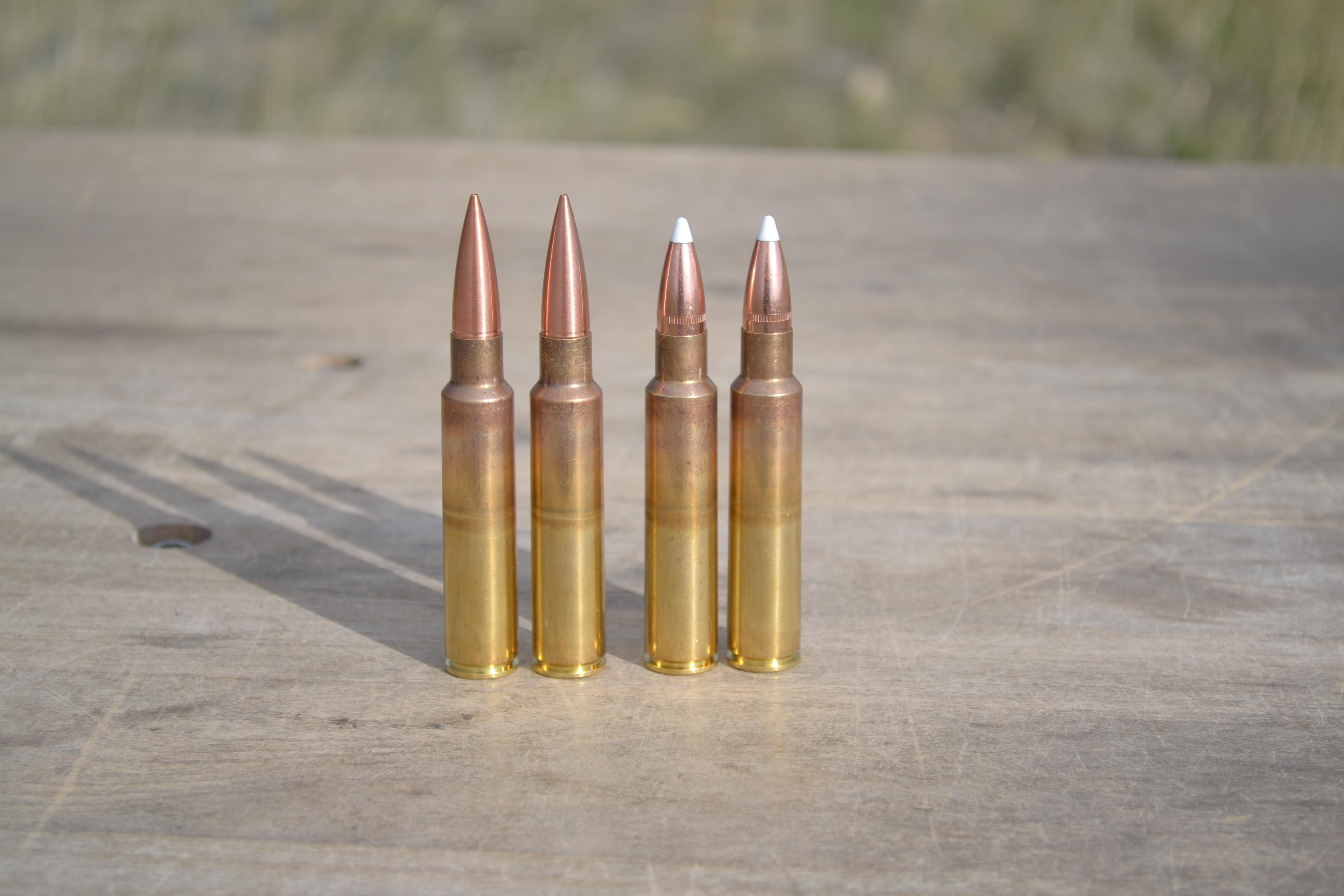 Was able to test these bullets for accuracy at 500, 880 and 1050 yards this morning. Both shot extremely well. I am always a bit nervous about the CE bullets used in conventional length throats. I have had several rifles have serious accuracy problems with them when used in a conventional throat design but to be fair, all of those issues were in my 338 Allen Magnum and 375 Allen Magnum rifles where muzzle velocity was in the 3300-3400 fps range, not 3000-3100 fps.

Because of this concern, I tested the 320s first and was very happy to see them shoot extremely well. At 880 yards they easily shot into my accuracy requirements. Hitting 1/2 moa sized targets was easy and they held that level of precision out to 1050 yards just fine.

The 260 gr Accubond, surprisingly, impacted EXACTLY the same point as the 320s at 880 yards. They were a bit flatter shooting at 500 yards and a bit more drop at 1050 yards which makes since because of the lower BC and higher muzzle velocity.

At 500 yards, they easily shot as well as the 320s. At 880 yards, there was a bit more horizontal variation but this was due to the variable winds I was shooting in I am sure. As I was not adjusting for wind, just shooting. And at 1050 yards, it was clear that the lower BC of the Accubond was more at the mercies of the wind then the 320s. Still, the rifle shot extremely well with both.

Just don't get to do load development for this 375 Allen Xpress that often so wanted to share some results. It certainly gets overshadowed in sales by the 338 Allen Xpress and 7mm Allen Magnum but it greatly impresses me every time I work with one on the range. Its amazing how it will push the 7000 ft/lb energy barrier very hard and do so with a relatively lightweight rifle and very comfortable recoil levels. I was able to personally spot each impact for every shot today, even at 500 yards shooting off harris bipod and rear bag.

Its really a big game, heavy game jack of all trades, could be used as a close range stopper for mean critters that like to hurt you, could be used for an amazing close range to moderate range elk and big bear rifle in a light packing rifle, or can be used in a dedicated long range rifle where performance is wanted but barrel life is a premium as well. Nothing it cant really do. Little much for a whitetail or pronghorn rifle though!! LOL

Was a fun successful test. Got to learn the characteristics of a new bullet and get some new load data for that bullet so always a good time!!!
M

Just came across this; looks like a 30 in barrel?
Perhaps the best all around cartridge and rifle combination in the world.

I certainly like the sound of the 375 Allen. Beautiful rifle sir!
N

Big Trouble said:
I certainly like the sound of the 375 Allen. Beautiful rifle sir!
Click to expand...

Amen to that. Wow. Wish I needed one.

Marine sniper said:
Just came across this; looks like a 30 in barrel?
Perhaps the best all around cartridge and rifle combination in the world.
Click to expand...

Big Trouble said:
I certainly like the sound of the 375 Allen. Beautiful rifle sir!
Click to expand...

While the 375 Allen Xpress is quite overpowered for most North American hunting situations, its a tremendously versatile chambering. One could range from the 235 gr barnes tsx clear up to some of the 400 gr heavies if you wanted. However i feel the 375 Allen Xpress is best limited to 350 grains of bullet weight and 280-320 gr. being nearly ideal. It offers extremely long barrel life, has a very wide range of great powders that work well in it. Extremely powerful and efficient and also very easy to get great accuracy out of. Accuracy limitations is often the bullets themselves if they are not designed for precision shooting. Still most big game 375 cal bullets shoot extremely well. Very serious elk, moose and big bear medicine with few peers!!
Share:
Reddit Pinterest Tumblr WhatsApp Email Share Link