Looking for a loaner.

I bought a Savage pull-off barrel from a member here that forgot to tell me the reason he was selling it was because it has no throat.

Learned the hard way not to use a loaded round to head space a barrel. I ended up head spacing on the bullet. First couple shot the factory loaded brass near separated above the case head.

I knew I had issues with my head space so I put it back in the case. When I got home I used a sized case without a bullet. I found the barrel was several turns too far out, but still didn't make the connection as to why.

Back to the range!

First couple 155gr bullets bolt closed fine. And shot very good. The velocity was about were I expected, low because of lite loads. I had a slight hard bolt close on a couple rounds of Fusion factory loaded ammo...I thought it might be because I had the head space a little tight, but I realize now it was seating the bullet. The velocity of the Fusion 150gr ammo was within 25fps of what they advertise on the box. And shot really good. But the bolt would not close on 165gr bullets...ended up pulling a bullet out of a case. So back to the house to see what happened.

I didn't measure from the mouth of the case to where the ring is on the bullet, but it is close. I know it is less than 1/4" and it puts a clean scratch all the way around the bullet like it has a sharp edge.

I will mic it and take some pictures tonight.

I don' have the 30 caliber bushing for my comparator...only bought the 6.5 so far.

So I have a small choice...either nothing but shoot only light bullets or ream a throat in the barrel so I can use bigger bullets. As it is a would have no case capacity with a 200gr bullet shoved down inside the case.

Need a rent/loaner reamer...might as well barrow a head space guage while I'm at it.

I put thus in the regular forum so the real gunsmith wouldn't bash my gun smith skills!
L

When you say reamer do you mean chamber reamer or throater? I would not run a chamber reamer in just to try and lengthen the throat without setting it back a couple turns.
Last edited: Jul 19, 2018
C

We...yes. I was thinking to basically hand reaming it like you would if your doing a short chambered barrel. It is a Savage barrel so if I cut it .001 deeper, it can still be head spaced. I'm planning to either rent or buy a go guage this time.

I have reamed/head spaced a couple barrels for mauser actions.
L

Not all reamers are the same even though the same caliber. If it was me I would just use a throater. I have seen reamers as much as .003 difference.
C

I' sure you are right, but I am doing it by hand. I know if I lathe it would, that certainly would be the best way to fix it.

I guess I need to call Savage and see what they have to say...
C

Took break from fishing so I could post a photo of just how deep I have to seat a bullet to keep it out of the lands! 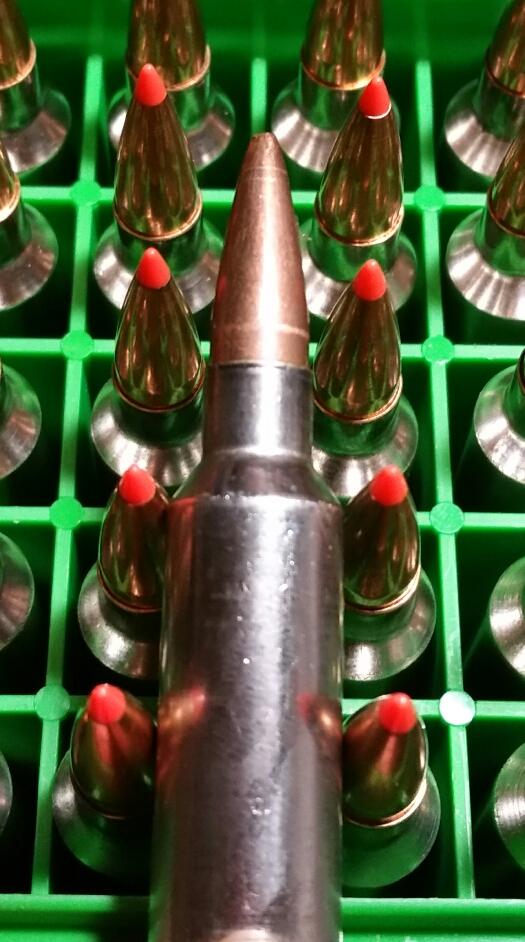 The 2 most important things people need to ask is freebore and neck dia.when you order pre-fits or custom rifles for that matter. Most pre-fit manufactures just use saami spec. reamers which in a lot of cases doesn't work as people expect when they start reloading for them, there geared toward more for the factory ammo. Seems like there on the hardly any freebore realm or a ton like the 6.5 creed with .199 or the 204 ruger with.100 that you couldn't get close to the lands without a 32. grain bullet falling out of the neck. Most Saami spec reamers will not perform with reamers that are designed for particular bullets that's why they are custom chambers as is the case with the 30 cals running heavier bullets 7mm running 180-195's

I think your headspace is way to tight. I think it went from too loose, to too tight the second time you headspace using a sized piece of brass. Might be a good idea to get a GO and NOGO gauge and set headspace with those. Then you will know if you need the reamer or not.
C

When I got this barrel, all the normal sources were out of stock...Midway USA, Brownells and PTG. So I used loaded ammo from the original barrel to head space the barrel.

Wow was I wrong!

Looks like you can rent them here. Much better than buying a set, as I did. Unless you plan on using them a few times, I think renting is a good option.
https://www.reamerrentals.com/ProductDetails.asp?ProductCode=300WSM.g
S

Thank you sir!
Got into fishing mode, bought another boat the last week of June. I have not checked around again since I put the rifle together.