Last year I left the house a little after 7 and was home by 9 hanging my goat while Wife fixed breakfast.

This year was a bit different. I didn't get this guy until about 3pm.

Not as many hunters this year on opening day in Area 7 as normal. I noticed that when I was running our club's sight in days, not as many out of staters.

Seems the critters were father away then normal, couldn't get as close as normal though they didn't seemed overly spooked. Maybe I was always just in the wrong spot.

I had to break my rule of never shooting past 300 yards. This was was taken at 578 yards (per my GPS). I hit him high in the lungs and thought I missed the way he took off, but only made it about 25 yards before he did a double somersault. Figured it was a lung shot.

I was concerned about tearing up too much meat because I was trying my future elk load......150 gn Hornady IBs 270s. A bit over kill for goats. But it just busted the ribs on both sides and turned the lungs into what looked like coffee grounds.

Not a record, but respectable. 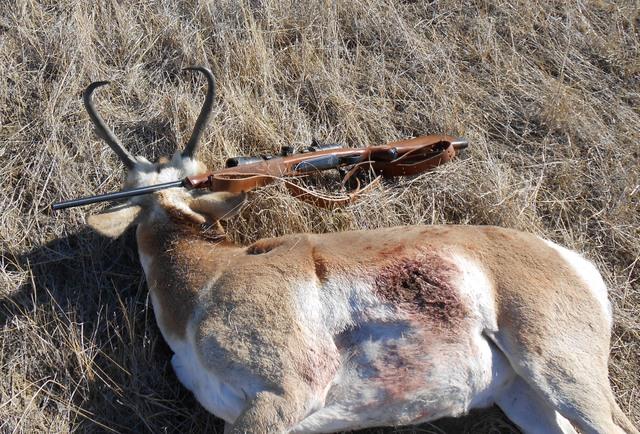 I hunted area 7 last year. I had the privilege of starting 4 days after the season started. Took me 4 days to get 3. Just couldn't get close. If they saw you they were running.

Look at the bright side= You got to spend more time afield
Goats have a way of makeing the hunt memerable, the more I hunt them the more fun they are.....

Sounds like a fun time though, as long as your out hunting. Congrats on the goats.
C

MachV said:
Look at the bright side= You got to spend more time afield
Goats have a way of makeing the hunt memerable, the more I hunt them the more fun they are.....
Click to expand...


Yes true but the down side is my daughter didn't get one but she did get to miss some school.
You must log in or register to reply here.