I recently received my 28" 8 twist, 28 nosler remage barrel from X-Caliber, awesome fit and finish, took 12 weeks to get it, but I have to say that a far as I can see from inspecting it, it's about the most perfect barrel a guy could ask for. Problem is, I've tried retumbo and h50bmg, wlrm, rem 9 1/2, and F215 primers, with 180 Eld-M bullets. 2 ladder tests and about every combo of those primer and powder combos you can think of, and I'm getting high pressure and terible copper fouling even at loads far bellow the max book loads. Before anybody mentions brass, it's not an issue. I've used new brass and twice-fired brass, and I understand headspacing off the shoulder. X-Caliber dosnt list 28 nosler as one of their chamber options at the time I ordered so they had to buy a reamer and as far as I know this is the first 28 nosler they have chambered. I'm thinking my freebore is soo tight around the bullet that it's building pressure before the bullet even contacts the lands. Is there any way to fix this without sending the barrel back? Or has anybody experienced the same thing with 28 nosler? I just got done fighting with Carbonsix for a year after getting two of the most horrible barrels I've ever seen and I'm very reluctant to send a barrel back for replacement.... what do I do?

Some barrels are just tighter and faster than others.
What are your charge weights?
What velocities are you getting?
Try a different bullet?
Try RL33?
Try a LR (non-mag) primer?
B

What velocities are you getting?
I assume Nosler brass? I have found Nosler to be fairly soft with their heads in most cartridges, and show extractor marks earlier than most other brass.
L

What velocities are you getting with the powders you are using?

This is a target from Ryan Pierce borrowed from his website:
400 YD group from a 28 nosler I built a customer 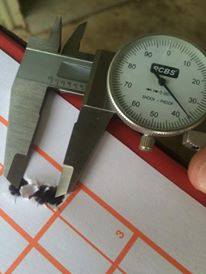 He thinks very highly of the 28 Nosler. I suggest calling him for a little tet-d'-tet regarding your problem.

I have heard a lot Ryan Pierce. Seams like he's mentioned in almost every forum that says "28 nosler". Maybe that is my best bet. Might have him recommend a reamer. Thanks for the advice everyone

The reamer that Ryan uses, along with Axisworks in Tempe, AZ, is a special cut reamer designed by Ryan Pierce and Eric Goss. Specifically for the 195 Berger.
R

One of my buddies recommended 869 too. Anyone know how temp stable it is?
H