Oh ,ya got to add pics,lol. Congratulations on the harvest.

Yeah, that would help wouldn't it! 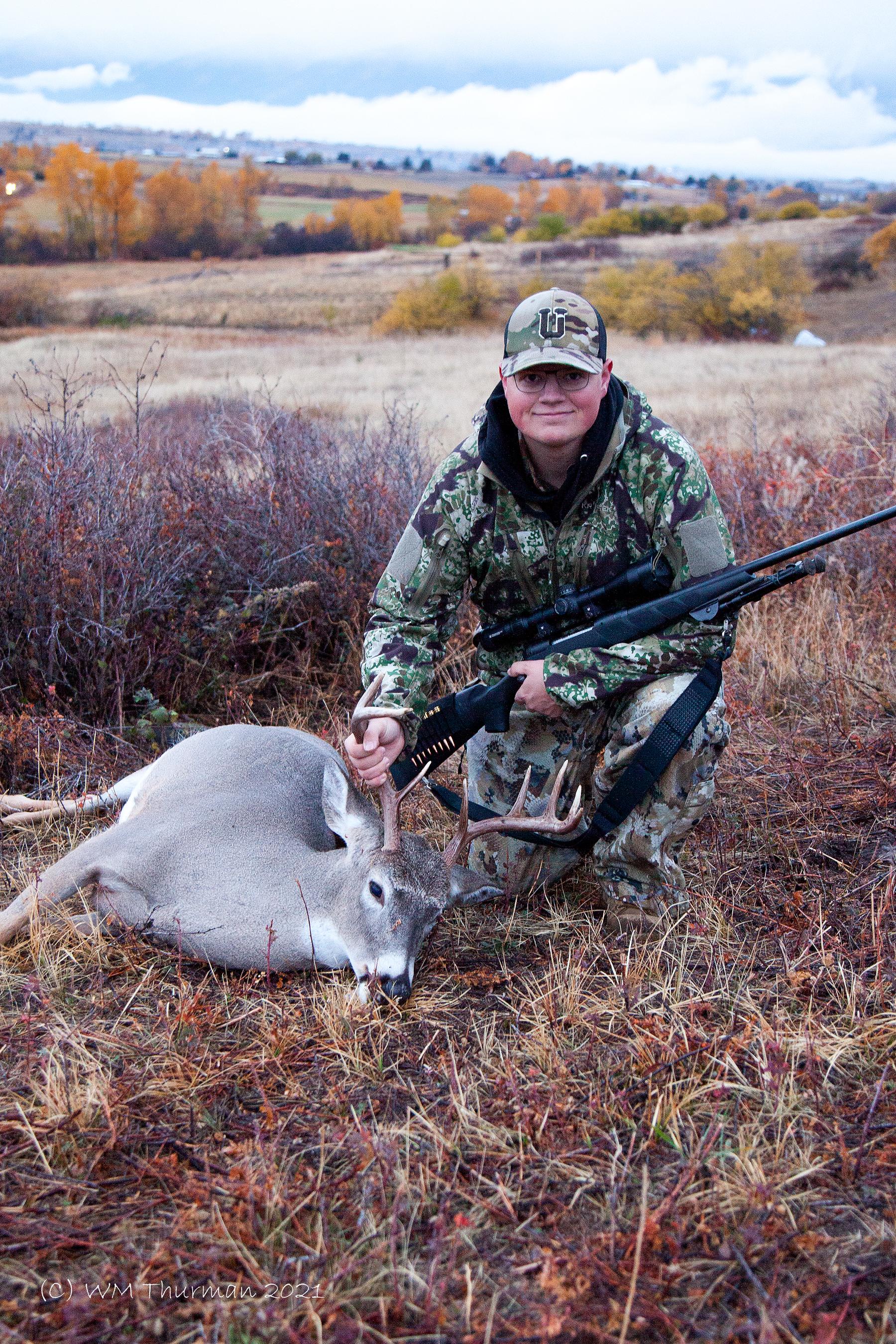 #2 animal to get that freezer full. I hate to even post this here as it is ANYTHING BUT long range hunting.
Location: Stevensville, MT
Gun: 356 Winchester
Bullet: 180 Speer FN
Number of shots: 2
Distance: 40 yards on the first shot, about 90 on the second as she was running off.

I spotted her and waited until she would present herself so that my shot would not be a hazard to homes that are within 500 yards. As she moved over the bump in the sage, she got closer and presented a nice 40-50 yard broadside. I shot, she jumped but then started to run off, tail up, head up high like she had not been hit. I could swear I saw blood out a hole in her chest cavity, but her actions said otherwise. As I thought she would run off and maybe I missed on the first shot, I racked one in and swung on her as she was running about 1/4 away. As it turns out, both shots hit home and did massive damage. Even after the second shot she continued to run and disappeared from sight. I knew she was hit though as just before she went over the slight rise, she wobbled a bit.

Second shot touched her heart. First shot took out both lungs and other damage.

I attribute her actions to shock and adrenaline. We have seen this before with near range hits even shots that turned their hearts to splatter.

Fortunately, this girl had no fawns following her. She was "dry".

Rick Richard said:
1000 yards or 10 yards it is about meat in the freezer. Congrats.
Click to expand...

Speaking of meat in the freezer, I finally took a few minutes to weigh out the meat from 3 of our whitetail deer post butchering and packaging. We have not ground the scraps yet so these are net weights, nothing added as of yet. We did the butchering ourselves and it is all deboned.
Mature whitetail buck: 51.8 lbs
Whitetail doe: 27.5 lbs
Whitetail fawn: 13.2 lbs.

While the fawn was a legal, but unintentional kill, some of it was ruined with the shot. The other 2 had tiny amounts of meat ruined. I would guess that we lost about 2 lbs on the fawn. It is by far the most tender meat we have ever eaten.

From the above, you can see why if you are interested in meat for the freezer, the extra effort to get a buck is probably worth it. Doe meat is better eating though. Shooting a fawn is hardly worth the effort. By the time you figure in all your costs, you are probably looking at $20/lb.

Anyone have net weights for an elk? Processed commercially and/or self-processed? My youngest son killed a enormous cow in CO some years back. We processed it ourselves, but didn't weigh it out. If I were guessing at it, I would estimate about 180 - 200 lbs. We did not debone everything on the elk. We made some racks of ribs out of her fat sides. While she was a bit tough (really old cow), it was very good eating.
Share:
Reddit Pinterest Tumblr WhatsApp Email Share Link