Well guys had me quite a weekend! My dad and I went to do some 2000 yard shooting. When we went to pick up a key from the rancher on the place we go to shoot he told us the day before a neighbor shot 3 hogs in the middle of the big field. So when we got there (right at 15:00) I broke out my Swaro spotting scope and my dad starting glassing with his swaro binos. After about 45 mins of glassing I finally spotted an ear in the sage. Then another and another...After a few minutes all the hogs filed out into an opening. We decided on an ambush. I was to go and take the first shot and send them running towards my dad. Well I walked up on a tank dam and set up. 580 yards to the one on the far left. Doped the wind and dialed up my nightforce. I sent the shot down and the 168 berger hammered him and he fell. All the hogs took off across the field towards my dad. I waited for him to shoot but didnt here any shots... I looked in his direction with my binos and saw him hanging off a tree limb birthing out a big ol mud monkey bahahahaha!!! He just couldnt hold it!!

So i picked my stuff up and had to run and relocate for a shot. When I got back to where I could see the pigs again I laid down and the swaro range finder read 1018 yards right in the middle of about 20 hogs standing tighter than sardines.. I dialed my Kenton BDC to a click shy of 1025, put on my wind and looked through the scope. The hog at the front of the pack was much larger than the rest. I settled on his neck and sent the shot... boooom......whap! He folded on the spot! The hogs ran towards me this time and I dumped another on the run at 740, then another on the run at 890 right as the rest of them ran out of the field.

Not a bad day if I must say so myself! Because of so much flooding, the hog that was shot at 1018 was the only one we could drive to and get pics with. He was right over 300 lbs and had 4.1" cutters on the bottom. 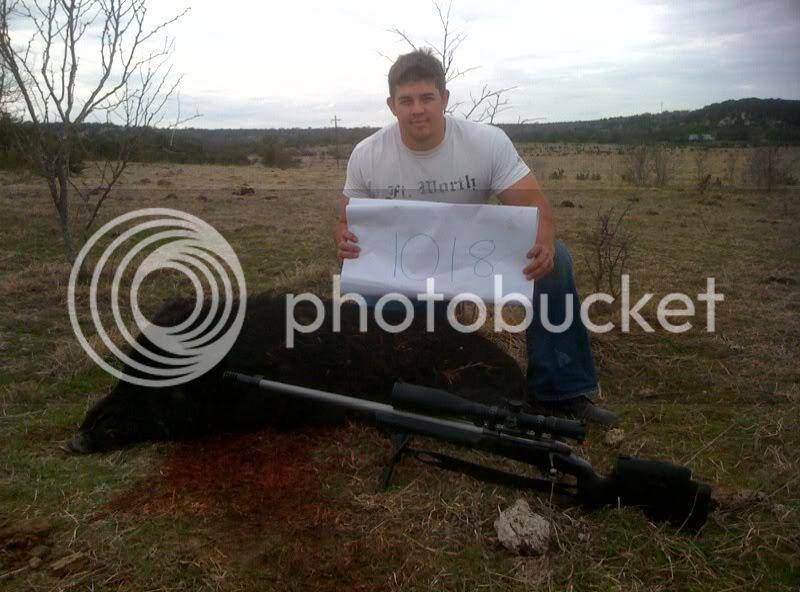 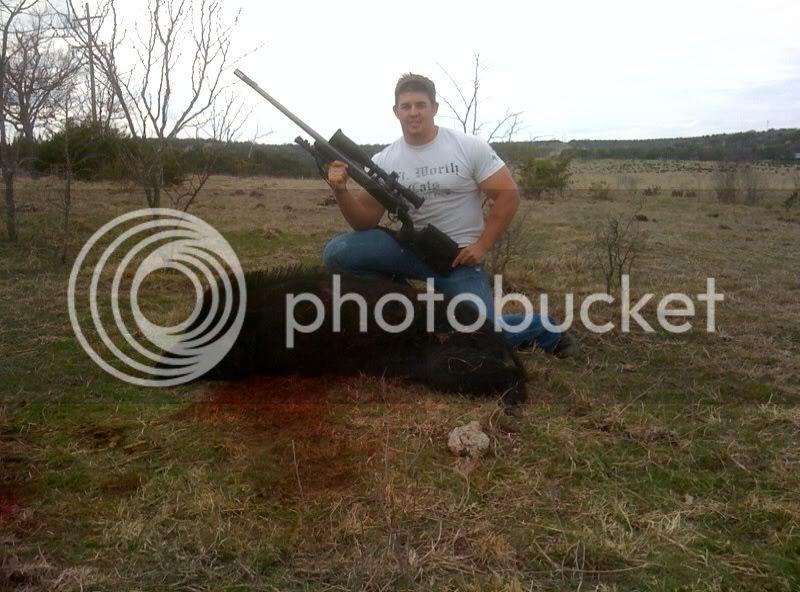 Location
Back in the south -NW FL..

Dang old mud donkey kept your Paw from getting in on the action.

How was the performance of the Berger at 1K?
O

I'm coming down to San Antonio in 9days, looking forward to some LR hogs myself!
J

Nice shooting and sweet rig! That 7Mag was walking the walk and talking the talk. Bet the adrenline was pumping. Thanks man. JohnnyK.
F

I was wondering what you do with the pigs? Are they safe to eat?
1

Guys thanks for the comments!

Bob- The Berger did great. Entered into the right ear and exited the left ear about the size of a golf ball. Wish I would have hit him in the shoulder to see how it opened up.


Top- We eat the ones under 200 if they dont have too much musky scent. Smaller the better. I like the 20-50 lbers. We split them down the middle and cook them whole. Big ones are coyote food and bait! Sit over the carcas and shoot the doggys!!

Going back this weekend to try the 168 JLKs. They shoot better in my rifle for some reason. Just never hunted with them yet. There is a ridge on the place where I can shoot pigs at up to 2000 down in the valley but will keep the kill shots within 1500 do to energy bleeding off too much after that. I will keep you posted!

Oh I will have my camera this time too!!!
S

Nice shootin, Tex!
I've got some of the 7mm 168 JLK's myself, haven't run any of them through my 7mm RUM yet. Be sure to give us an update on how they perform on game. Swampy at JLK would appreciate some feedback also.
I