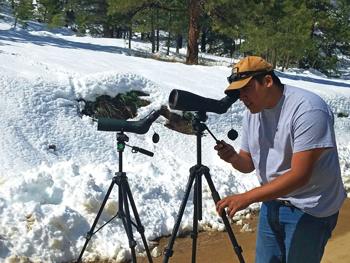 Like a kid at Christmas, I was incredibly anxious and impatient waiting for the Zeiss Conquest Gavia 85 spotter to come in for review. From the moment I opened the box, I was highly impressed. I did wonder, however, if like the kid at Christmas who becomes quickly bored, my regard for the scope would diminish. The answer is a flat out NO. The conquest is a lightweight, functional, and highly clear piece of glass that I would highly recommend to anyone looking to get a whole lot of bang for the buck. Whether you’re trying to spot impacts on steel through terrible Colorado mirage or you’re glassing up big game for hours on end, this spotter should definitely have a place in your pack.

The night this spotter arrived, I decided (read: couldn’t wait) to get it out of the box and get a feel for it. It comes in a very eye-appealing box. Looking back, the high definition of the artwork on the box should have been a sign of the definition and clarity you get from the scope. A carrying case might be a nice touch, but for the price point, it seems Zeiss squeezed every bit of quality you could ask for and more out of the spotter itself. 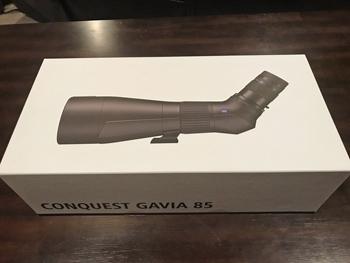 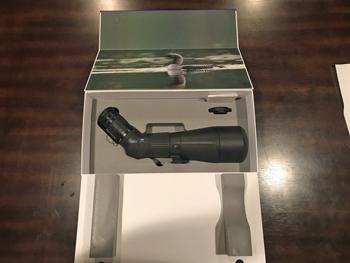 The first thing that struck me when handling the spotter was how light and balanced it is for an 85mm spotter. The Conquest comes in at 60 oz. Compare that to a Vortex Razor HD 27-60x at 65.6 oz. or a Swarovski ATS 80 at 58 oz., and the scope is already on the winning side of weight for price point in my mind. I mounted it on my Vortex Pro GT tripod, what I would consider an average tripod for a hunter, and it sat and panned just as smooth and easy as my 11x33 spotter.

My previous experience with 85mm or even 65mm bells is for them to be quite front heavy and that making fine adjustments is difficult. The Conquest rides any tripod with ease, which will be a point of emphasis later on. Additionally, the Conquest rotates within its tripod-mounting collar with a quick turn of a knob, giving it a lot of flexibility for glassing while sitting or from the cab of a vehicle.

My first day to use the spotter in the field was while confirming DOPE out to 1000 yds for an upcoming local PRS shoot. The particular gun club I am a part of in northeast Colorado has hands down the worst mirage I have ever experienced. Coming from the Southeast, that’s saying something. Let me tell you, the Conquest stood up to the test.

While I was initially concerned about the lack of a fine adjustment knob for focus, what I considered a must for such high mirage, the large textured focus ring was quite easy to dial in to a desired setting. Not only could I see the actual shapes of the targets at 1000 (which is more often than not quite difficult), I could actually make out individual impacts on the steel with ease. I could stop right there and call this spotter a winner, but we’re not done.

For sake of thoroughness, I decided some side-by-side comparison should be done. The only spotter I own at the time is a Vortex Razor HD 11x33. While a great scope, I wanted something a little more on par size and pricewise with the conquest. Thus, I got my hands on a Swarovski ATS 65.

This is a good time to mention that MSRP for the Zeiss Conquest is $1999. Street price can vary. Given that the Swarovski is 20-60x power and has an MSRP pushing $3300 for the 80mm bell, it makes a good comparison to evaluate bang for your buck. If the Conquest even held its own side-by-side in terms of use and clarity, then it would be more than I could ask for.

I ran the two spotters side by side at a local shoot and was immediately blown away. Mirage was quite high that morning, and I found myself seeing bullet wash and impacts more easily with the Conquest than with its more highly regarded and higher priced peer. I had the match director run it for a while as well, and he could not say enough about how clear it was. I then carried the two scopes for a nice ride with the wife through the mountains, and once again the scopes were indistinguishable, if not the edge for clarity going to the Conquest.

I ran the Conquest at a few more range days and local shoots with the same results. Yet, no long stretch of time was spent behind the glass without a break. However, I recently had the opportunity to RO the National Rifle League’s Mile High Shootout in Craig, CO. This meant 12+ hours on Saturday and 9+ hours Sunday of spotting for 115 shooters each day.

It had rained the previous two days, and forecasts called for lows in the 40’s and highs in the 90’s. You can only imagine the type of mirage that would cause. Saturday morning, I preemptively put some Tylenol on the counter preparing for the type of headache I would have when I returned.
Words cannot express how thankful I was to have the Conquest that weekend. I had absolutely zero trouble cutting though the mirage to spot impacts from 400-800 yds. With heavy AR steel and these light 6mm cartridges that are all the rage in PRS style shooting these days, that is really saying something. And at the end of each day, I could not believe how unfatigued my eyes were. Physically I was tired, but my vision was no worse for wear than when eating breakfast both mornings. No Tylenol needed. That was the moment that solidified for me just how great this spotter is.

Now no review would be fair without candid discussion about any dislikes. I tried long and hard to find more, but I have only one: Field of view. To be fair, it’s not even really a dislike as much as just a “didn’t meet expectation.” For reference, FOV at max power is claimed at 69’ at 1000 yards. A Vortex Razor HD 27-60x is claimed at 68’, and the Swarovski ATS 65 at 60’ at max power for the same distance.

With an 85mm bell and the Zeiss website claiming a “wide-angle field of view,” I found myself surprised at how difficult it would be to quickly acquire targets 200 yards and in. Quick transition between targets during a given stage of fire could be troublesome at times as well. Additionally, when ran side by side with the 65mm bell of the Swarovski, FOV seemed almost identical between the two at any given power. One could and would likely get used to this over time and it would become of no concern. Even over my few weeks of use, I noticed it less and less. Like I said, field of view just didn’t quite meet my expectation in that area.

Be that as it may, it is a small ding on an impressive resume when it comes to this spotter. The Conquest is lighter and more functional than scopes in its similar price point and has glass quality of spotters considered a step above. In my mind, it would be near impossible to find a better combination of glass clarity and ease of use in a sub $2000 spotter. If you want a spotter that fits my personal mantra of “buy once, cry once” without actually making your wallet cry at all, the Zeiss Conquest Gavia 85 is what you need.


View attachment 79578
Jose Gardner has been shooting and hunting since the age of 5, running hounds for big game in the Southeast. Moving to Big Sky country for school and work, he quickly found a passion for long range shooting. Still an avid hunter, he now also enjoys PRS style matches any time he gets a chance. He currently works as a food scientist and product developer in the beef, pork, and poultry industries.

How was the eye relief, especially in comparison to the other two scopes you tried? The only scopes I can use at top power and still see the whole image are the Cabelas/Meopta and the Leupold. Would like an alternative.

catorres1 said:
How was the eye relief, especially in comparison to the other two scopes you tried? The only scopes I can use at top power and still see the whole image are the Cabelas/Meopta and the Leupold. Would like an alternative.
Click to expand...

I never noticed any issues. but I also ride scopes (spotter or rifle scopes) a lot closer than the average person. That being said though, I had alot of people get behind it to give me their opinion, and never had eye relief mentioned. Considering how many of these guys are optics snobs, I would say no news is good news.
This is fantastic, thank you for your time on this!
How's the Gavia's end of day performance?
Thank You!

xTapouTx said:
This is fantastic, thank you for your time on this!
Click to expand...

Thank you very much!

Great! large objective and glass do a great job gathering light.
Your review is interesting, but unfortunately quite biased.

Front objective lens size has nothing to do with field of view either. FOV is determined by the positioning of the prism and lenses in the body of the optic and the eyepiece construction. That's why you witnessed a 65mm spotter having the same field of view as an 85mm spotter.

Im not saying the Conquest isn't an amazing scope, but I would like to see it compared the the Swarovski ATX 85mm spotter or the Meopta S2 HD 82mm spotter. That would be a true test of apples to apples that would determine if it belongs with the big dogs regardless of a little cheaper price point. Though for $2K, it better be darn good glass!

DrillDog said:
Your review is interesting, but unfortunately quite biased.

Front objective lens size has nothing to do with field of view either. FOV is determined by the positioning of the prism and lenses in the body of the optic and the eyepiece construction. That's why you witnessed a 65mm spotter having the same field of view as an 85mm spotter.

Im not saying the Conquest isn't an amazing scope, but I would like to see it compared the the Swarovski ATX 85mm spotter or the Meopta S2 HD 82mm spotter. That would be a true test of apples to apples that would determine if it belongs with the big dogs regardless of a little cheaper price point. Though for $2K, it better be darn good glass!
Click to expand...

Accurate FOV Calculation; Depends on ratio of sensor size and image distance.
You must log in or register to reply here.