Sighting in was easy, with only having to make a few minor adjustments. The rifle proved reliable once again by providing groups between 1/4” to 1/2” groups. If it weren’t for shooter error, I am quite confidant that all the groups would be 1/4” or better. Once sighted in, I conducted the standard routine of spinning on the elevation and windage turrets to determine if the scope would track and maintain accuracy. It worked flawlessly with groups appearing around the target exactly where I expected them to be. Then on the final turret adjustment I returned to the original setting and the scope was dead on and centered once again. 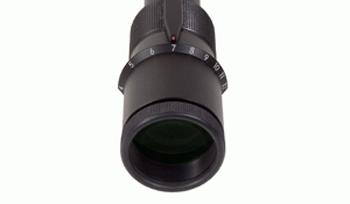 One really can’t ask for much more than that when testing the turrets. The adjustments are clearly marked and the clicks are snappy and clean, making it very easy to keep track of the changes in the MOA adjustments.

One other comment I would like to make about the scope while using it for the first time is that I really like the design of the magnification ring. It has the magnification numbers angled back towards the shooter so you can easily see what power you are on without having to fully remove your head from the rifle stock. There is also a fairly large bar attached to the ring that indicates what power setting you are on, and can be gripped and used to turn the power ring. The indication bar is an ideal size for finding with your fingers and is especially useful while wearing gloves. This is no small convenience up here is cold Montana. I like the positive feel of this bar as I have often used it in the field. It’s great because I don’t have to look down or away from my intended target to find it.

While coyote hunting I usually leave it turned down to 4X or 6X depending on the terrain and calling conditions. If the coyote comes in, but hangs up out a little further than I had anticipated it is easy to reach up and feel for the adjustment bar to turn up the magnification without looking away from the target. It requires minimal movement and that is very important while hunting animals with exceptionally good eyesight like coyotes. I can’t say enough good about this feature. It is very user-friendly!

Enough about the specs and features. Let's get to the field. On my very first trip to the field to call coyotes, and on my first stand of the morning, my partner and I called in a pair. The coyotes came into about 30 yards and stopped. I dropped the nearest coyote and then its mate took off at warp speed. I was able to track him in the scope and sent two quick shots after him. The first shot missed, the second hit him, but did not slow him down. By this time he was getting out there a ways. I put the second hash mark right on him as he ran quartering away at near 300 yards and touched one last round off. It sent him tumbling. So with the scope's field debut I was able to get a double on the very first stand. Pretty hard to not be pleased with results like that! 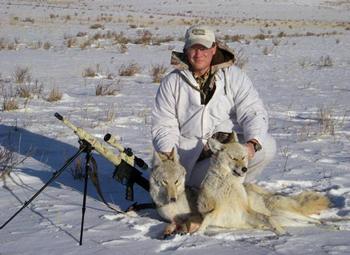 Double killed first time out with the Vortex Scope. Temperature was right around -20 F.


I have now had the scope for nearly 9 months. I have used it in weather as cold as -25 to temperatures reaching the upper 90’s. I have toted across dusty stubble fields and to the tops of mountains. It has been knocked around in my pickup, and even fell over once onto the hard wood floor in my bedroom. When it fell, the full weight the RRA rifle landed right on the scope. Through all this, the scope has performed without a hitch.

The scope has helped to contribute to the demise of many Montana coyotes. The outside of the scope no longer looks new, and has some scars to prove it. However, the optics are still as bright and clear as ever. Had anything gone wrong, I would not have been worried as the scope is covered by an unconditional lifetime warranty. I’m just glad I haven’t had to use it, and I suspect that I will not need to anytime soon. 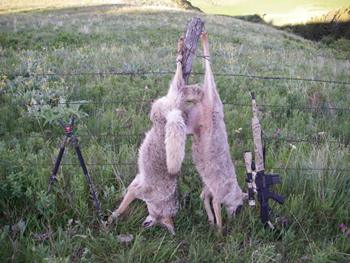 
It is very difficult to find anything to really fault with this scope. It reflects quality in about every aspect. The only thing that could be slightly improved is possibly the eye relief. I have it mounted on a .223 so the eye relief is not an issue, but if I had it on a magnum rifle another 1/2” of relief would be welcomed.

So am I ready to completely give up my Leupold scopes and only buy Vortex scopes? No, I have a long and secure relationship with Leupold, but for my next scope purchase I am planning on buying another Vortex Viper. It will go on my main “go-to” rifle for big game hunting. The way I look at it, it’s nice to have options, and the Vortex Viper scopes are a great option. I can with a clear conscience recommend the Vortex Viper scopes to anyone looking for a quality mid-priced scope. It is a great value for the money!