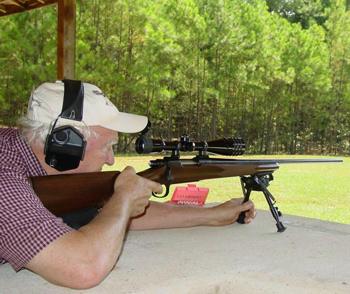 With an afternoon of shooting scheduled it was time to decide which rifles would make the trip to the range. One rifle that always seems to miss the trip stood out; a nice Remington 700 Classic chambered in 221 Fireball. This combination should provide a lot of enjoyment, but it never ends up at the range or in the field. The reason? It just doesn’t shoot that well. In the ten-plus years this rifle has existed the shooting log shows only eighty-five rounds have traveled down the barrel, with an average group size a little over an inch… a measure that most shooters would not find acceptable. So the Fireball was retrieved from the safe and the decision made to spend some time with the little treasure to see if its accuracy could be improved with simple modifications, changes that many shooters could make themselves, or have done by a gunsmith at a reasonable cost.


The rifle is one of the limited edition Remington Classic 700 series which were offered in a different caliber each year from 1981 to 2005, and each caliber was only made for a short period of time. The 221 Remington Fireball was the chambering for the year 2002, and this one was purchased the following year. It sports several nice features unique to the Classic model: a red rubber butt pad, jeweled bolt, nicely checkered walnut stock and old-fashioned bluing. However it does have the disadvantage of being one of Remington’s J-Lock models, a short-lived feature that allowed the bolt to be locked for safety, but was not well received by hunters and shooters. After obtaining this rifle it was topped off with a nice Weaver CT-15 scope set in Leupold mounts and bases.

The 221 Fireball cartridge was originally created for Remington’s XP-100, a bolt action pistol that was designed as a varmint and target gun and offered to the public starting in 1963. The XP-100 remained available through 1998. The 221 Fireball cartridge is basically a shortened version of the 222 Remington, and half a century after it birth is still one of the fastest handgun cartridges ever produced by a major ammunition maker. Remington only offers one loading for the Fireball, a 50-grain bullet with an advertised muzzle velocity of 2995 feet per second. That’s not too shabby for a pistol round; especially considering the muzzle velocity of the 222 Remington ammo with the same bullet is only 145 feet per second faster.

Remington specifies their 50-grain load for the Fireball, with a 200 yard zero, will hit 1.8-inches high at a hundred yards, 1.7-inches high at a hundred and fifty yards, and 3.4-inches low at two-hundred and fifty yards. Nosler has improved the performance of the Fireball by offering ammo with a 40-grain Nosler Varmageddon ammunition with a muzzle velocity of 3100 feet per second. These numbers would suggest the 221 Fireball to be a good varmint cartridge out to three hundred yards.

To get the project started the bore of the rifle was checked for any fouling that might affect accuracy. Although the rifle had been cleaned before storing a new bore cleaner had entered the picture, so it would be interesting to see if the new cleaner would find any fouling the old cleaner missed. A cloth patch was soaked with Patch-Out and pushed through the bore. After ten minutes another clean patch was run through the bore and it came out indicating both copper and powder fouling. The bore was treated again with Patch-Out and left on the bench overnight.

A nice, crisp trigger does wonders for accuracy and the one that came with this rifle had a very heavy pull. Shortly after the rifle was purchased the trigger was removed and sent to a gunsmith in Montana for adjustment. The cost was very reasonable and when returned the trigger pull measured a delightful eighteen ounces.

When the decision was made to improve the accuracy it was found that the trigger pull had dropped dramatically, in fact, on occasion the trigger would go off when the bolt was closed. This precarious situation had to be corrected before shooting could continue so the trigger was re-adjusted to a more reasonable, albeit still a very nice two pounds, and the adjustment screws sealed. Obviously the trigger was not the reason for the rifle’s mediocre accuracy… in fact the light trigger probably helped achieve the one inch groups.

One simple accuracy improvement used in the past was to insure the stock was not exerting pressure on the barrel. To check if the barrel was free-floating a dollar bill was run between the stock and the barrel, and it stopped right at the sling swivel bolt. The two trigger guard screws were removed and the barreled action pulled from the stock. The blockage was quickly apparent… the barrel slot had purposefully been made to apply pressure to the barrel by leaving a ring of wood for the barrel to rest against.

Using a round rasp that was slightly smaller than the barrel channel the extra wood was quickly removed and the barreled action re-installed in the stock. This attempt at free-floating the barrel brought about another problem; removing the wood allowed the barrel to lay on the bottom of the stock all the way from the action to the end of the stock. At this point there was no choice but to bed the stock in order to free-float the barrel.

Two gunsmiths were contacted for an estimate on a basic bedding job but neither was very enthusiastic… both wanted to do a first class job that included metal pillars. The price with pillars would not fit in with the low-cost budget so, after some discussion and pleading, one of them made an offer: “Tell you what… one evening you can bring your rifle over and I’ll show you how to do a quick bedding job, but not one that has my name on it. And something you should know… just because an action is bedded does not mean it will shoot better. It’s possible that it won’t shoot as good and you may have to work up a new load.”

Some days later the rifle was taken to the gunsmith. He took the rifle and quickly removed the stock: “One of the trigger guard screw holes has been drilled crooked. These screws are used to keep the stock in alignment while the fiberglass is drying so this needs to be corrected.”

Once the tape was in place the prepping for the fiberglass started. The action and barrel were cleaned and any openings filled with plumbers putty to prevent the fiberglass from going into places it shouldn’t be. He made the process look simple, but I knew better. He had done it so many times it was second nature.


Next, masking tape was applied to the recoil lug, except for the flat side facing the action. When the preparation was almost finished, a neutral shoe polish was applied everywhere the fiberglass would be touching the barreled action to keep it from sticking. Then the fiberglass was mixed and applied inside the stock where the action would fit.

The stock was then placed on the barreled action and pushed gently into place. As the fiberglass oozed out of the crevices it was wiped off with cotton swabs. The final step was to wrap a rag snugly around the stock and barrel to keep things in place while the fiberglass dried.


After watching the bedding process I had a real appreciation for the skill required to properly bed a rifle action… glass bedding requires some training and an aptitude for meticulous work. It was obvious many things could go awry… getting the fiberglass on the stock, not aligning the barreled action properly, using the wrong thickness of the tape on the barrel, and so on. Any of these mistakes would be difficult to correct.

A little checking around found that prices generally range from $100 to $200 for a basic job. However, if you decide to bed a rifle yourself there are plenty of do-it-yourself articles on the internet that can be referenced.
Next page: Tuning A 221 Remington Fireball >