THEY CALLED ME EL DIABLO 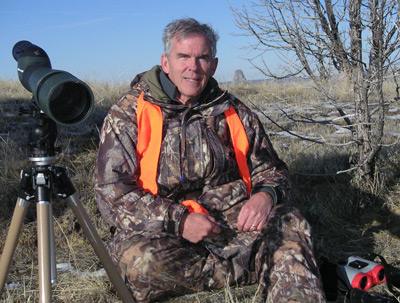 THEY CALLED ME EL DIABLO
By Len Backus, Publisher

Several years ago Jack Sullivan and I headed off to Sonora, Mexico to hunt with Kirk Kelso of Pusch Ridge Outfitters. We were excited to be going on our first Coues deer hunt. This is a sub-species of whitetail found in the arid, scrubby parts of Arizona and Mexico. A mature buck weighs about as much as a big jackrabbit, well maybe a little more. The back-to-brisket measurement I took indicated just 10 inches of vertical target size. My buck probably weighed about 80 pounds field dressed. Boone and Crockett for a buck's antlers is a score of 110 versus 170 for a whitetail.

We flew from Tucson to Hermosillo in a small chartered plane and made it through customs and gun checks ok with Kirk's experienced help. A half-day drive brought us to the ranch where we would hunt the next several days. The terrain was made for a long range hunter. It featured long vistas over small draws stretching out to the horizon. Our hunting method was to use a truck for access and to do a lot of glassing, looking for a good buck to stalk by foot. Coues deer hunting is known for its spot-and-stalk style of hunting. Many articles have been published about this. Kirk has been featured in articles which included well known hunters such as rifle maker David Miller. David is perhaps the foremost Coues deer hunter today with quite a few B & C bucks to his credit.

We were fortunate to have Kirk as our main guide and he was assisted by two Mexicans, one of whom was about 75 years of age. This fellow could walk rings around Jack and me in the 3,700 foot elevation hills...well, especially around Jack!

The weather was unusually windy and game sighting was down from normal. Kirk has a very high success rate for big Coues bucks usually but our luck was greatly affected by the winds. On the second-to-last hunting day the winds were down to about 3 miles per hour and it was drizzling. We had radios along but were not using them to hunt with. It was known that I didn?t want to take a short shot. The guides in the other group some miles away radioed us that they spotted a buck bedded down at a distance that might interest me so we headed over to their spot.

When we arrived the other guides directed us to the buck on the far hillside, two draws away from us. Initial range estimation was about 670 yards as I started to take a prone-bipod position. Kirk was spotting for me using a Leica Geovid range finder. When I indicated I was ready for the shot his final range call was 666. The buck was bedded down looking at us through the falling rain feeling pretty safe about the distance and the poor visibility in the rain. I could easily judge the wind by watching the angle of the falling rain. On my handheld Kestrel wind meter I verified velocity to be about 3 mph. I dialed in the drop and held off about 4 inches for drift.

I had about seven people in the peanut gallery watching me as I squeezed the trigger on the 7mm Dakota. Even though I am not a competitor used to shooting around others, I didn't seem to be affected by their presence at the time. At the impact of the Matchking, the buck ran about 25 yards and fell. I got up and accepted congratulations from the peanut gallery. The Mexican guides spoke no English and Kirk interpreted for me.

"They are calling you El Diablo, Len. They heard me call the range at 666. To them, this number is considered to be a sign of the Devil!"

[/floatright]This picture is from a couple years later. It is from my mule deer hunt in Wyoming in 2004. If you look closely, just over my left shoulder is a rock formation called Devil's Tower. With my son spotting for me, I had just killed a deer at about 650 yards. It would be an even better story if this one had also been at 666?

​
Len is the owner of www.LongRangeHunting.com. He has been a long range hunter since the 90's. He is as likely to bag his game with a camera as with a rifle or handgun. His nature images can be viewed and purchased at LenBackus.com