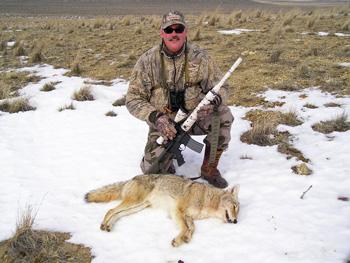 In his senior year of high school, my youngest son and hunting partner, Ben, needed a Senior Project. Ben is an avid predator hunter, long range shooter and gun nut so he chose to build a rifle for his project. He would be working under the tutelage of a local mentor. Ben is also both careful and artistic in his approach to his responsibilities so his mother and I blessed him in the endeavor. School rules and personal finances precluded him from building the rifle for himself so, never being one to miss an opportunity to add to my rifle collection, I funded the project for Ben and we began to plan the “Perfect” Coyote Rifle.

This project, like a work of art, is in the eye of the beholder. Our own tastes and experiences as well as our priorities and needs influence our decisions. My needs and tastes may differ from another hunter’s so defining those parameters may be in order.

The Objective
The AR-15 could arguably be the perfect platform for a calling rifle. AR’s are very accurate. They provide rapid follow-up shots. And, they are quickly and easily modified for different applications. I ran a two or three year stint with AR-15’s and, while I still own some AR’s, I have gravitated back to bolt rifles for calling. I cut my teeth on bolt action rifles, and while the AR-15 is a very effective coyote rifle, it is a different beast than a bolt gun. The short stock, the vertical grip, the left side safety and the necessary reset in even the best aftermarket triggers all conspire to make me feel less at home with the AR-15 platform than with a good bolt rifle.

My primary calling rifle the last few years is a very accurate Savage Predator Hunter in .204 Ruger chambering. With 35 grain Berger bullets and a 2.5-8X Leupold scope onboard, it honestly leaves very little to be desired in a calling rifle. The medium heavy barrel balances well on sticks or a bipod yet it is very portable. The Accu-trigger, although not completely flawless, is a serviceable mechanism and is light enough at around one and three quarter pounds. The Mossy Oak Brush dip job is antireflective and blends extremely well with most of our desert foliage. My only minor complaint with the Savage is the safety. It is relatively flat and takes extra care to move it to the firing position, especially when wearing gloves. Nonetheless, if I had been forced to spend the rest of my life calling coyotes with this rifle, I would not feel very disadvantaged at all. But, as most gun nuts know, needs and wants are two different things when it comes to building new rifles!

The Cartridge
My first inclination in selecting a cartridge was to stay with the tried and true .204 Ruger for the Perfect Coyote Rifle. As chambering for .204 was addressed, two issues became apparent. First was the question, “What was I going to do with my beloved Predator Hunter rifle if I had a full-on custom .204 with which to hunt?” My safe bulges because my rifles are like my kids, each with their own personalities, strengths, weaknesses and purposes in life. Who can sell their children? (Sick, I know!) Secondly, we enjoy hunting occasional coyote contests. If I had a niche to fill, it was with a more appropriate rifle for contests.

A rifle for contest hunting differs in few ways from a strict fur rifle. For contests, a cartridge with a little more punch to anchor coyotes at calling ranges and the ability to reach out further for coyotes that hang up is in order. Coyotes on the ground now is the objective. Most contests keep the coyotes, so the need for a perfect fur load is secondary to making sure the coyotes are very dead with minimal risk of losing them or wasting time tracking. With that in mind I still wanted a cartridge for which it would be possible to build fur friendly loads, since I anticipated using this rifle for my general winter coyote calling rig as well.

My long range varmint rifle is chambered in the .243 Ackley Improved cartridge. I’ve grown to like this round for its lack of case stretch and subsequent lack of case trimming. Bullets of sufficient weight and construction to anchor coyotes are readily available, yet fur friendly six millimeter bullets that will stay inside a coyote without exiting also exist. It is a good compromise between lethality and fur friendliness. A set of Redding Competition dies already sat on the shelf, making the decision easier.

The Hodgdon load data looked promising for the Hodgdon Superformance powder. A can was already sitting on the shelf so it got the nod. I had Lapua cases fireformed for my LR rig as well as Federal 210 primers. We were ready to load.

Using the load data for the 6mm Remington cartridge as starting point, we worked up a load settling on 52.5 grains of Superformance that produced a five shot group of 0.688”. A “proving” group of 0.624” confirmed the results.

At this point we ran into the first real snag of the project. The fired case length became an issue and headspace came into question. We sent the rifle to Cody Farr of Cody’s Custom Guns in Ogden, Utah. After measurements were made, they determined the headspace was over maximum by around 12 thousandths of an inch. Ben’s mentor did not have a No-Go gauge for the caliber and Cody thought that the method they used to set the headspace may have been affected by some galling of the rear of the bolt lugs, causing it to feel as if the bolt was camming tight when it wasn’t. Cody and my friend Kevin Hodson reset the barrel to the correct headspace and cleaned up the bolt lugs. They also threaded the muzzle and installed a flash hider with Quick Detach threads for a suppressor. Interestingly, the rifle shot virtually identical with the adjusted headspace and flash hider as it had previously.

Finish, Optics and Suppressors
When we were satisfied with the performance of the rifle, we sent it to Controlled Chaos Firearms for Cerakote in Flat Dark Earth. The Seekins Precision rail was reinstalled and we settled on the Leupold VX-6 2-12X CDS Illuminated scope in lapped Leupold Mark 4 lightweight rings. My eyes are slightly cross dominant so I’m very conscious of field of view (FOV) for close shots. The six factor power range of the VX-6 gives tremendous FOV at 2X yet leaves plenty of magnification on the top end for the occasional long shot on a hung up coyote. Overall, the scope fits my application perfectly with a clear, bright sight picture.

A YHM-3300-ti suppressor sits at the Class III dealer awaiting a stamp approval. It will complete my “Perfect Coyote Rifle.” My patience is getting tested as I wait for this finishing touch on the project.

The Proof and the Pudding
A new fur season, a new stand and a new rifle came together just over one minute into the set as Adult Cottontail from the Foxpro Shockwave drifted across the sage. A mature female burst onto the scene looking for breakfast. One shot, one coyote. Six minutes later a large male, probably her mate, is running through the sage from my right passing the caller and the first coyote by just ten yards. The morning sun was on him as he continued, seemingly ignoring my vocal barks and howls. Just as I think I may have to take the moving shot, he checks up and stops at 110 yards--one more bullet and one more coyote. Bullet performance was perfect. The bullets entered, fragmented and didn’t exit. So far, so good!

The first nine coyotes fell to the first nine rounds from this rifle. Bullet performance of the 65 grain V-max from the .243AI has proven to be very easy on fur, producing few exits. And the 87 grain load is very decisive as a contest load but not fur friendly at all—also just what the doctor ordered.

Changes and Regrets?
Is it perfect?
There are very few things we would do differently on this project aside from the technical issues. But, in retrospect, if we were starting over there are some minor changes we would probably make. For a rifle used strictly for predator calling, we would go with a threaded barrel rather than the QD attachment for the suppressor. Though we’ll use the suppressor on multiple rifles, the weight of the FH offsets much of the weight savings of the titanium suppressor. Along the same lines, I would also go with a slightly larger barrel contour and then flute it to bring the weight back down. Doing so would stiffen the barrel, better supporting the weight of the FH and suppressor. Not a deal breaker but we’re talking “perfect” here. The last minor point would be using another flush mount cup with a stud adaptor instead of the bottom rear sling swivel stud on the McMillan stock. The adaptor could then be easily removed for a clean butt stock when using a rear bag at the bench.

So, with these “flaws”, maybe this isn’t the Perfect Coyote Rifle after all. Luckily, there is still one more spot in the safe with the rest of the “kids” should we decide to make another attempt. Until then, perfect or not, the coyotes of Southeast Oregon probably won’t notice the difference!

Note: All loads in this article are deemed safe only in this rifle. Always reduce powder charges and work up slowly.


Tim Titus has been calling coyotes for 35 years. He lives in the coyote rich country of Southeast Oregon where he and his son spend their winters calling predators and their springs and early summers shooting varmints. Tim owns and operates No Off Season, an on-line predator and varmint hunting store and guiding business. You can check it out at No-Off-Season.com.
Reactions: Brian Ranson