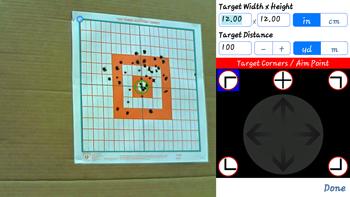 Shortly after submitting my original article on the Bullseye AmmoCam Long Range Edition in late 2015, I found out that some changes and upgrades had been made to the unit. Then, at the 2017 SHOT Show, Nick from Bullseye let Andy Backus of Long Range Hunting know about the improved capabilities added to Bullseye’s Target Manager app. Andy then asked me if I would be interested in putting the new features through their paces. Below you’ll find my thoughts and initial experiences with the upgraded AmmoCam Long Range Edition and its Target Manager app’s new and improved capabilities.

Hardware
Software
These new additions and upgrades will be discussed in the order shown above.

Hardware
Although the packaging, durable ammo box, WiFi hardware, 1 mile range base station receiver and 12 hour battery have remained basically the same, the AmmoCam now has an upgraded HD camera with night vision. This new camera takes up considerably less space inside the AmmoCam’s ammo box casing and has reduced the weight of the setup by 1 pound (from 5.2 lbs. to 4.2 lbs.).


The new HD camera also boasts better resolution and color quality as compared to its predecessor. To be sure of this, I printed a test sheet with font sizes ranging from 15 pt up to 80 pt. I tested both the old and new cameras from a distance of 10 feet with the app on my phone fully zoomed in.


Software
All of the new options discussed in the remainder of this article can be utilized with the original, non-HD camera system as well as the new HD camera system. As long as your Target Manager app is up to date, all of its features, including the new upgrades, can be used. No need to buy a new AmmoCam with updated HD camera to enjoy the upgraded Target Manager features.


Initial Menu Screen
The initial menu screen of the app has a few new added options. Menu Options now include Start a New Session, Load a Saved Session, Save Current Session and DemoMode. These are pretty self-explanatory and function as the titles suggest.


And now, thanks to the Import Target Photo and Take a Target Photo options, one does not need the entire camera system to utilize the newer features of the app like Group Measuring. All you need to do is download the free app and then upload pictures of groups to be measured! This is handy if you want to use the app without having to purchase an entire camera system. Just get the app, take a picture of your group, measure, log and save for later reference!

All of the remaining features to be discussed are accessed from the main Target View screen, via the menu button in the top-right corner.

Target Setup
This new feature allows you to enter the dimensions of your target, the aimpoint you will be using as well as the target’s distance from your firing position. These inputs will allow the app to calculate group size and sight-in adjustments in its other new features (discussed later on). First, you map out the corners of your target of known size. Then you mark the aimpoint you will be using. The aimpoint can be changed during a shooting session. This would be necessary as some paper targets have multiple bullseyes for you to utilize. Lastly, you can then enter the distance at which the target is placed from your firing position. All measurements and distances can be entered in either inches/yards or millimeters/meters.


Square and rectangular targets work the best, but one can still use this feature for circular targets like gongs, etc. Previous users are familiar with the old “skewed” target view due to the camera being placed to the right or left of the target (to avoid accidental ventilation by projectiles).

The ability to enter target dimensions now allows the updated app to convert the image to a square, straight-on frontal view of the target during your shooting session, even though the camera may be placed at a considerable angle to the target. Bullseye refers to this ability as TrueView Technology. This, in my opinion, is one of the better improvements over the old system and substantially improves app viewing and use.

Target Grid Overlay
The updated app has the option for a grid overlay of your desired color, line thickness and transparency as well as user-selected grid spacing. Grids may appear red, yellow, green, pink or orange with thin, medium or thick line thicknesses. Users may select to hide the grid entirely or show with solid or semi-transparent lines. Grid squares may be adjusted in ⅛” increments from ⅛” to as large as desired (limited by target size). This feature provides some easier viewing for targets without printed grids and can give visual feedback as to impact distance from bullseye if desired.


Scope Sight In
This feature allows for the app to calculate and display needed sight corrections in relation to the aimpoint you have selected. Users first select Scope Turret Increments (1/10 Mil or ⅛, ¼, ⅓, ½, or 1 MOA clicks). Your aim point’s visibility as well as its color can be turned on or off. Users can also choose to have the scope correction displayed on the screen or voiced by their device (not available on all devices) or both. After marking a shot on the screen, the correction will then be displayed or voiced as, for example, “3 clicks LEFT, 1 click DOWN.”


This correction is derived from and made in relation to the inputs we have discussed in the article thus far - target dimensions, distance and scope adjustment increments. This feature could be useful for new and beginning shooters or as a simple double check of your own calculations. It should be remembered though, that the corrections calculated by the app will only be as accurate as the parameters the user has manually entered. Incorrect inputs for target size, distance or scope click increments will result in incorrect calculations made by the app.

Group Measuring
Users can mark multiple groups from multiple firearms or loads in different colors and then measure them each within the app. First select the color of the group you wish to measure, then choose the format you wish measurements to be displayed in (inches, centimeters, MOA, Mil). The Hole Diameter is user adjustable and can be matched to the bullet diameter being used. With these parameters set by the user, the app then calculates and displays the following: Number of Shots in Group, Group Width, Group Height, Mean Radius, Circular Error Probable (CEP), Extreme Spread, Horizontal Offset, Vertical Offset, Total Offset and Scope Adjustment From Group Center.


These calculations are displayed together on the right of the screen and are color-coded to the actual target which is displayed on the left half of the screen. This was perhaps the most intriguing addition to the app in my opinion. If the user inputs are correct, the app can provide a fair amount of useful data to the shooter.

The measurements I personally find most useful are the Extreme Spread, Total Offset and Scope Adjustment From Group Center. Once groups are measured, the image can be saved with optional notes to your device’s photo library for later reference, or bragging should you desire to do so. Note: The Extreme Spread measurement is the largest, bullet-hole center to bullet-hole center measurement in the group… AKA what most guys use when talking about how small their groups are.

A note for iPad users
iPad users will notice an added feature on the initial Menu screen. Users can select from interactive targets (like Battleship) and the app will track and score a 2 player game/competition. A unique option, in my opinion, for those wanting a specialized challenge with a little fun and competition.

Conclusion
Overall, I’m impressed with the improvements Bullseye has made to the AmmoCam Long Range Edition. Bullseye has taken an already good product and added some great new features. In my opinion, if you’re going so far as to develop a useful long range target camera, it makes sense to add these new features, such as an un-skewed head-on view, shot correction information and group analyzing capabilities. Bullseye’s new improved AmmoCam Long Range Edition has upped the game once more.


Clint Bryant was born and raised in Southwest Wyoming where he now resides with his wife and three children. Aside from God and family, hunting and shooting have always played an important role in his life. His passion is long range shooting and anything related, from helping in his dad’s custom rifle shop, to hunting and reloading or just trigger time at the range.

exactly HOW do you map the target corners and aimpoint?