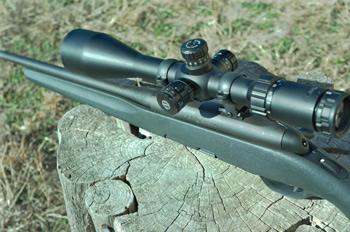 The .260 Remington round is far from dead. My relationship with the .260 started early in its history. In the late 1990’s Remington did a slight change to the 6.5-08 A Square which had been around for many years and standardized by A Square through SAAMI. The .260 has the same ballistics as the 6.5-08 but the neck of the .260 is just slightly longer. About the time the .260 hit the market, Thompson Center brought out the Encore. As soon as I saw this rifle was available in the .260, I ordered one. I mounted a 3x9 Leupold on it and sighted it in on my range. This rig would shoot a one inch group all day. It became my primary rifle to hunt whitetails. I once lent it to a friend to take a doe. He got the doe and came back almost in amazement; he said, “That rifle shot exactly where I aimed”.


My love affair with the .260 was just starting. The Encore was nice but it was awkward to load on the bench. I kept the rifle for many years, then it went the way of a lot of my rifles. I sold it. I built two more .260s; one was on a Savage action and the other was on a Stevens action, both rifles shot exceptionally well but were heavy. The search for a lighter rifle in .260 started. Remington came out with a limited run rifle called the 700 CDL in .260. This rifle would shoot MOA at 100 yards but not any better. I put around 200+ rounds through it and could not better the MOA groups. Since it was a limited run, the rifle became popular and I sold it to someone that wanted it more than I.


STEYR PRO HUNTER
I had a Steyr Pro Hunter in .25-06 which I really liked and it shot one half MOA . A Steyr Pro Hunter in .260 seemed like it would be the answer. The search was on and I found a new one. This rifle weighs 7.7 pounds; the hammer forged barrel is 23.7 inches long. The stock is a fiber glass enforced synthetic. Some shooters think it is ugly but I think it is utilitarian and great for a field rifle. The metal parts have a finish that is actually in the metal called Mannox. This makes the rifle rust resistant and the action very smooth. The trigger is adjustable and mine is set at 2.5 pounds. Scope mounts for the Browning A Bolt fit the Pro Hunter and thus are easy to find. Steyrs can be readily identified by the twisted pattern on the barrel. This comes from leaving the hammer forging marks made at the factory. The recoil pad is very absorbing and the length of pull can be adjusted by adding or removing spacers in the pad. This rifle has an unusual safety; it is a three position wheel that serves not only as a safety but your bolt release also.

Hawke scope, note the rheostat control on the focus knob

To test the long range accuracy of my hunting load, I took it out to 400 yards to shoot a freshly painted 8” gong. The best group was 4 ¼ “ for that yardage. The bullet seemed to deal with a quartering wind of 6 mph very well since I only had to hold on the left edge of the gong.

For all my tests I used Lapua or Nosler brass. I found both to be very easy to reload and consistent in every aspect. The cases did not stretch as much as the Remingtons had in the past and the primer pockets need no attention. The rifle did not like a hot barrel well, so all groups were kept to three shots.


FINAL THOUGHTS
Even though the .260 has taken a backseat to the 6.5 Creedmoor; it is still an excellent round. You can push 130-140 gr. bullets over 2850 fps if you desire and the .260 is far easier to please when reloading than the Creedmoor. Brass is now readily available from the best companies in the world. Some people say that the round’s length is limiting. Maybe so but in the Steyr I shot loads that were up to 2.92” and still had plenty of room in the magazine. The Texas deer season is coming to an end this week so I am headed out to give the Barnes LRX and the Pro Hunter a workout on a doe.

The Steyr Pro Hunter is a great hunting rifle. I like them so much I have three more in other calibers. If you are in the market for a medium priced, quality scope, look at what Hawke Optics has to offer and check out their free software. They have a choice of reticles that will meet nearly anyone’s demands.

HAWKE SIDEWINDER 30
The rifle needed a good scope. A few years ago I had a Hawke scope and it worked perfectly with the exception of a loose turret screw which I fixed. Hawke optics has been around a long time in the air rifle field. If you know anything about air rifles, you know that the rifles are very hard on optics due to double recoil. These scopes even though they are made in China are a very good buy in the midrange priced scopes. I cannot tell you about their customer service because neither scope has had a problem. They come packaged in a hard case and have screw in protective caps. Hawke also has a web site where you can go enter your load information and it will give you a cheat sheet or a round print out to fit your flip up lense cover. This software can also tell you the POI at different magnification settings. So at 24x you may be able to only hold for 550 yards but if you drop the power to 12x you can go out to 100 yards. This particular 6-24x56 Sidewinder 30 had the SR PRO IR reticle with elevation and windage marks. The print out will tell you exactly where your round will hit when these marks are used. Of course the scope is a second focal plane but the Hawke software gives you all you need to make accurate shots using any magnification. You can print out your drop information for different scope powers. I have to admit I did have to play around with the software and inputs, just for fun. This software is free and available on their web site. If you want to adjust the turret for elevation, it has a total of 62 MOA.

The scope has fully multi coated BAK4 lenses that bring in a lot of light. But if the light condition is dim, then they have a lighted reticle that is controlled by the very end of your side focus knob. It produces a red or green lighted reticle. The turrets have good strong clicks and are unlocked by pulling them out. So when the turrets are pushed in they cannot be turned by accident. Even at higher magnification you will find you do not need to crawl up on the scope to keep a full field of view. Hawke gives a limited lifetime warranty which is transferable. This is a great scope for less than $550.00.

All the bullets tested.