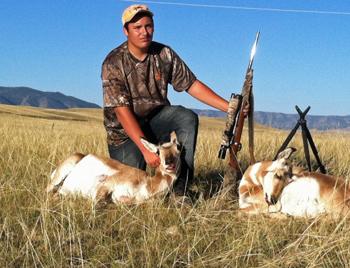 ‘Lopes, speed goats, bears, buffalo, deer and prairie dogs, Wyoming's got them all. Ron Skinner, his grandson, Terrel (my son) and I went on a budget antelope hunt in Wyoming this September. There was some adventure, a little work, the hunters bled, and meat was collected.

Ron and the boys enjoying the shade of the creek-bed at lunch.


Overall we travelled just over 2200 miles in Ron's shiny white Chevy 4X4 short-box extended cab pickup, with the tonneau box cover. Right. Four folks in an extended cab truck with all their gear - guns, tents, sleeping and eating instruments, food for a week, clothes, and Terrel's 1200 page book - he likes to read. We almost had to leave the book out.

The original load included a 100 quart cooler and one that held 120 quarts too. As a space saving activity we crammed all our food, plus a little, into those coolers, thinking we would consume enough to make room for meat and ice. This kind of faulty thinking had us acquiring another, larger - 150 quart-er for the meat, while in Laramie. Guns were crucial to the trip, obviously, so I had envisioned mine and Terrel's in hard cases. Then Skinner called and said there was only room for the smaller space saving soft sided sockies. We'd pad them with bedding, as bedding could be shifted into all the corners not taken up by our kitchen sinks, bedroom furniture, and lounge chairs . . . oh, there weren't no room for chairs of the folding nature. Rocks-Are-Us became our furniture supplier onsite.

I hadn't set up my pup tent since 1984, but found all the pieces there, so the boys inhabited the space I lived in during the spring of '84, in the British Columbia mountains north of New Hazelton. They did okay in that.

Ron and I were rather cosmopolitan, sleeping in a four man tent with cots. Well, that's what we were supposed to do, but nature had another idea. We were camping, on our first night in Wyoming, west of Laramie in the mountains. It just happened that a 300 pound black bear invaded the campsite the two previous nights, and our night was no different.

My BC mountain experience had left me a little nervous when I heard about the possibility of a bear roaming around, so I went to bed with a hot loaded Ruger Vaquero in 45LC. 255 grain SWCs with a goodly whack of 2400 should have given me some modicum of security, but the thought of being firmly ensconced behind two solid layers of floppy nylon tenting material had the mighty Vaquero shrinking to Bearcat size in my mind.

Midnight saw the bear wreaking havoc up and down the campsite. He overturned dumpsters, set off motion alarms, and left campers with the whites of their eyes lighting up the night. The big bugger probably laughed all the way to his cave that night.

Finally, Skinner hit the alarm on his key fob, activating lights and the horn on his pickup.The bear left. Then the other bears came. Local sheriffs. Wildlife cops. Everybody. We were busy chatting up all the armed locals with bleary eyed bear stories, almost till sunup.

Thankfully, the park service shut down the campground the next day so they could bait and shoot the three time offender. We left for the Motel 6 in Laramie. Because the boys were 14 & 15 we only had to pay for two adults, so the bill was less than $70 a night. There's something to be said for solid walls.

Not having slept on Sunday night, I was tireder 'n a teenager on the first day of school, but we had it to do. Hunting, I mean.

Sunday afternoon, while checking out our supposed hunting area, we were turned out of a whole section of WMA, so we had to rescout - quickly.

It seems that on some WMA blocks you have to apply for a permit to hunt there -separately from the license area tag you get drawn for, but after you're drawn. Nowhere in all the Wyoming literature we received or saw online was this mentioned. At this writing I can’t remember how many square miles were affected - Skinner's got our map - but it was considerable.

After cruising all the places we thought we could go on public land without seeing shootables, we headed for Interstate 80, to get some coffee eye props. There was a single square mile next to the highway that was open, and I mean open. The ground we were looking to hunt on was flat, featureless, grassless, cactus ridden, and made of rocks. And pretty darn flat.

All the hunting stories I read and listened to before this trip said you, “spot and stalk”. Bug eyed antelope stared straight at you across the tabletop tableaux wherever you saw them. Not quite like sneaking through the river bottom trees and shrubs, hunting deer in eastern North Dakota or Manitoba.

About eight antelope were bedded in the middle of that section, with perhaps a two foot undulation to the south of their position. I got the idea that if I crawled under the fence, then crawled another three hundred yards, slowly sat up, aimed and fired - I might have a chance. So I tried it.

I got Ron to let me out behind the antelope's resting place, and together with Terrel, crawled across the cactus. It's not a good idea to yell every time you get stuck with those spiny prairie ornaments, as you could alert your prey, so you bite your tongue until blood drips down your chin. Shredded hands hurt too.

On another crawl, a couple of days later, I found the answer to my lack of cactus proof gloves - rocks. They're everywhere, so I grabbed a couple and used them to keep my hands from contacting cactus, thorns, and other sharp rocks.

Terrel and I crawled far enough to get within about sixty yards, sat up and surveyed the herd. With my .260 EABCO 26 inch barreled Custom Shop Encore, I thought I could get a double . . . maybe . . . on two does that were so perfectly aligned that it was tough to see the offside one. But Terrel was on my right, the two does were on the right, and you always shoot what's on your side, right?

I had Terrel, with his ubiquitous XS7 Marlin .243 loaded with 100 grain Partitions, line up with the possible double. Those Partitions had proven phenomenal penetrating capability on midwestern Whitetails, and 'lopes were littler, so I gave up the idea of my sending a 140 grain Remington CORE-LOKT toward them.

Terrel missed on the agreed upon, whispered, count of three, I didn't, and we had a dry doe down. Pictures were taken, entrails removed for easier dragging, and I got a phone call - “You've got one coming your way at a dead run!” Ron sure was an excitable feller! When I hunt Whitetails I use a technique I came upon by accident - I sit down when I'm startled by a deer I didn't anticipate. It works almost every time. In fact, it's never not worked when I hunt alone. They always stop and look to see what I was, where I disappeared to, or something - I don't know what's really in their heads, but even in a cultivated field I've had running deer stop like a reining horse if I go prone, or sit. They may not stay planted long, but if you're ready for it, you've got a great chance to end your hunt by sitting.

The author and his Monday antelope. This was about fifteen minutes before the next one busted out across the prairie and caught a CORE-LOKT too.


So, we sat. Right beside the carcass of the doe weʼd just eviscerated. And here came another shootable antelope with his cute little head held high. We had doe/fawn tags, so the fact that he was a he was okay.

He ran straight north, on our right, along the fence for a while, saw us sitting with the “sleeper”, and looped around west, then south. At about sixty yards he stopped broadside.

When I got Skinner's call and told Terrel to sit, we got our rifles up with our elbows on our knees, just in case. So we didn't really have to move.

When the antelope stopped, my crosshairs found his engine room, my finger squeezed the well tuned trigger, and down he went. Terrel turned his head, looked me in the eye and said, “I was just gonna do that!” Greedy ole Dad stole the day again. Bad habits die hard . . .

For the rest of the week I was gunless, trailing, coaching, and sometimes leading Terrel to his two tag filling antelope, an exciting but missed shot at a coyote, and one dead prairie dog.

Ron's Remington 700 in 25-06 reached out and got his doe at last light Wednesday, and his grandson had a heck of a time. He got so excited when he had the opportunity to shoot, that he missed everything. One day at a waterhole antelope surrounded him, and he couldn't make a choice. It was overwhelming.

Thursday we had target practice at midday.

Friday morning Grampa was stickin' his chest through his camo when he got the call that the young feller's Ruger 77 in .243 Winchester'd put two on the ground by 8:00 am. Fence sitting on the Local Morning Antelope Escape Route had paid off. Terrel and I had heard five shots that sounded like two guys cutting loose at something. Later Seth said he had a lot of trouble reloading. He'd had only three in the rifle when he started shooting, emptied it, reloaded and shot twice more.

Seth and his Friday Morning Double.


I said - “I don't know what was going on behind your eyes, but no one who rips off five rounds that fast - sounding like two guns - had any hiccup throwin' shells into his rifle!” Dang, that boy's fast!

If we'da had the light offa his Friday morning smile on our first Wyoming night in bear country, that nocturnal bruin never woulda showed up near us . . .

By two thirty Saturday morning we had run the nine hundred miles back home, unloaded the truck, and jumped into our own beds. Out of eight tags applied for, seven were filled.

We ate in a dry stream bed most days at noon. We saw deer, buffalo, antelope, prairie dogs (Some of which we shot during the hottest part of the days), bear paw prints, elk, and a bunch of cool people.


Les Voth learned to hunt whitetail deer and coyotes in his native Canada, and has hunted both as often as possible in eastern North Dakota since immigrating to the United States.