Sacrifice For Quality or The Case For Custom 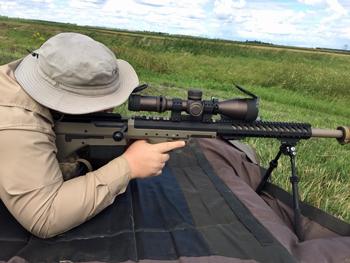 Sacrifice For Quality or The Case For Custom
By Les Voth

With this gear, and my friend Mad, I learned to shoot past and beyond my aspirations. I had visions of becoming proficient to 600 yards. I have no good explanation for picking that number beyond the limits of imagination.

From eight inch targets at 536 yards and 739 yards, I progressed out to the twelve inch square steel hanging at 887 yards. The IPSC silhouette at 965 yards has now gotten to be one of my favorite bullet splashers.

Mad and I even had a head shot contest using the six inch square simulated head on the 965 yard steel. There is now one splash there I made with my rifle - on purpose. This was all with factory loaded ELD Match ammo, and my Weaver Kaspa set at 12X.

Like an addict, though, accessorizing had to start. Something had to get better.

Two more rifles went down the road to get a Vortex HS-LR FFP 6X24X50 scope. There are too many reasons to list for why that scope is staying on top of my accurizable
precision custom rifle.

I love the reticle.

Windage marks are useable to 12 MOA of hold off, without dialing so far.

The shims you install after zeroing, to get your simulated zero stop, work within one
click.

Eyepiece focus, and parallax adjustment is the definition of clear and sharp, to me.

Are there improvements to be made? Yes, yes, yes.

The trigger is factory Remington. It is a little heavier than I would like. Someday I'll get a
better one. It has a little creep. About half way through the creep, when I'm paying
attention, I can feel something like a notch. Off putting when you're trying to be careful.

The trigger is not unsafe. I feel these things because I've caressed it a thousand times.
You get familiar that way.

The other thing is the bolt. I'm going to get the firing pin bushed and change out the guts for a faster lock-time. You notice that, with a thousand releases. When you get so you think you can tell yourself a story between the sear breaking and the firing pin slamming its target, an approximate 40% reduction in lock-time would be interesting.

Five rifles for one rifle. Two more rifles for a scope. More desired accessorizing to go. Any regrets? None!

Last time out, Mad and I were working on refining our loads. Mad was behind his accessorized Desert Tech rifle, pill placement directed by a Vortex Razor Gen 2. His
suppressed .338 Lapua purposefully creating bug holes.

I finished up with a ten shot group that, minus two, was pretty okay.

Mad says he had to rap the 965 yarder a few times before going home, so he did.

The quest that day for my Remington, was a switch from 140 ELDs to Berger 130 grain AR Hybrid OTMs. I had one round left when I was finished testing at 100 yards. With nothing run through a ballistics calculator yet we contemplated and, I guessed.

Last shot of the day. Dial up 22 MOA, hold off 8 MOA right for wind. Here goes - bang!
Smacked it right in the middle of the sternum! Another dead AR500 silhouette.

I don't know what I need right now, but there's three more units to sell/trade. I ain't
gonna miss them either.

The author dreaming of an interesting rifle

Les Voth learned to hunt whitetail deer and coyotes in his native Canada, and has hunted both as often as possible in eastern North Dakota since immigrating to the United States.