Reaching Into the Past - The 219 Donaldson Wasp 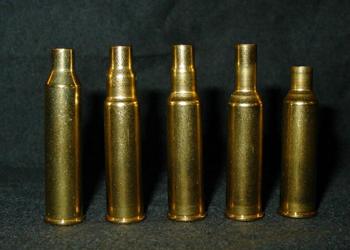 Reaching Into the Past - The 219 Donaldson Wasp

It’s hard to believe that some of the varmint cartridges that originated in the early part of the last century are still doing an excellent job on small game. As far back as 1912, Savage offered the 22 Hi Power cartridge in their Model 99, and it delivered a 70 grain bullet at 2790 feet per second. This cartridge is no longer available in the US but is still somewhat popular in Europe, and known as the 5.6×52mmR. The 22 Hornet and 218 Bee, first offered in the 1930s, are still in use for targets out to two hundred yards. But the varmint cartridge that set the benchmark for high velocity shooting was Winchester’s 220 Swift, introduced in 1935. Over eighty years ago this round was delivering a 48-grain bullet at a velocity of 4110 feet per second. Ammo for the venerable Swift is still available today… and not many 22-caliber cartridges can top its performance.

As one might suspect, there were numerous wildcats based on these oldies. The popular ones had names like 22 K-Hornet, 218 Mashburn Bee and 219 Donaldson Wasp. These wildcats had a larger case volume than their parent, providing room for more powder and resulting in higher velocities… and more often, better accuracy. I have had many enjoyable outings with some of the old factory varmint cartridges and their offspring wildcats… and my favorite of the lot is the 219 Donaldson Wasp. The Wasp was considered by many to be the most accurate cartridge from the mid-1930s into the 1950s, and held this honor until the 222 Remington came on the scene.

In his excellent book, The Ultimate in Rifle Accuracy, Glenn Newick provides this account of the Wasp: “The 219 Donaldson Wasp’s first variant saw the light of day about 1933. Harvey Donaldson tested several styles before settling on a case formed from 219 Winchester Zipper brass. Harvey had produced a balanced case which achieved better accuracy with six grains less powder than the parent case. In the early years hundreds of shooters, using hundreds of rifles, all found the combination to be extremely accurate. The classic Wasp case used from 27 to 31 grains of 4320, and from 26 to 29 grains of 3031. The top loads are now recognized to be over the safe pressure limit. Muzzle velocity with a 55-grain bullet approached 3600 fps.”

Since the 219 Zipper was not yet on the market in 1933 Harvey probably used 25-35 Winchester brass for the first couple of years, and when Winchester announced the 219 Zipper in 1935 he settled on making the Wasp cases with Zipper brass.

When I was much younger, owning a Wasp was one of my fervent goals but it was at a time when money was not easy to come by, and purchasing a custom-built wildcat rifle was not in the cards. Even when I reached an age where it was affordable it seemed the rifle I selected would always be chambered in a modern caliber. So this time, when I found myself with a spare Savage Model 10 action that needed to become a rifle, the decision was made to satisfy that old yearning and have the rifle chambered for the 219 Donaldson Wasp.

I figured that modifying the Savage action to handle the 219 Donaldson Wasp case should be simple, basically just replacing the Savage 308 bolt-face with a 30-30 Winchester. But to my surprise Savage never made this action with a 30-30 bolt face. So I searched for other options and, with a dash of luck, made contact with a retired engineer from Savage Arms. He advised me wisely: “Some time ago I built a Donaldson Wasp and used 225 Winchester cases to eliminate the problem you have. If you did this you could use a 308 bolt. Of course the barrel would be head-spaced on the shoulder, not the rim.”

What a simple solution; this would require no changes to the Savage action and the 219 Wasp cases would be made from 225 Winchester brass. And Winchester is still making runs for this brass so it is not too difficult to locate.

The barrel selected for the Wasp was a stainless Krieger single point, cut-rifled barrel with a 1:14-inch twist and a varmint contour. Once the barrel was on order Dave Kiff of Pacific Tool and Gauge was contacted and, after some discussion, the reamer selected was for a typical 219 Donaldson Wasp chambering with a no-turn neck. A Boyds’ stock, the Ross Featherweight Thumbhole model in nutmeg laminate, turned out to be the ideal stock for the project. It only weighed two and a half pounds and the barrel channel was easily altered for the varmint barrel. The parts for the rifle were sent to Kevin Weaver in Peyton, Colorado, a top-flight gunsmith that had created several very accurate rifles for me. With the rifle under way it was time to delve into one of my favorite pastimes… making wildcat brass.


The reloading room was well equipped from years of constantly adding new devices so the additional reloading equipment required would be minimal. A set of forming dies, standard dies and a Sinclair neck expander should do the trick. RCBS offers two versions of forming dies, one for 25-35 Winchester cases and the other for 30-30 Winchester cases; the more common set for using 30-30 Winchester cases was chosen. During case forming the necks would be shrunk to 22 caliber, but would still have to be opened up to fit the mandrel on a neck turner, and for this task a Sinclair expander die with a 22-caliber mandrel was obtained.

Creating the brass was easy enough, but somewhat time consuming. The first form die was mounted in the RCBS Rock Chucker press and a 225 Winchester case was lightly lubed with Imperial Sizing Wax. The case was inserted in the shell holder and the press handle pulled down, easily for a second, and then it gave some resistance. More pressure was exerted until the shell holder touched the bottom of the die. The first forming die did most of the work by pushing the shoulder down considerably. The second form die was installed in the press and required much less pressure to complete the operation. Finally the case was sized using the standard full-length sizing die. The resulting case was removed… and there was a Donaldson Wasp case with a very long neck. This process continued until fifty of the ‘long neck’ cases had been created.

The stages in forming 219 Donaldson Wasp cases from a 225 Winchester. Completed case at right has not been fire-formed.


Then, using a hobby cut-off saw modified to utilize shell holders, the overall case lengths were cut to the appropriate length. The necks were de-burred and chamfered and in short time I had my first 219 Donaldson Wasp cases. They looked pretty good so I sent several to Kevin Weaver for his testing. When Kevin attempted to chamber one it would not chamber. After a few measurements it became apparent to Kevin that the neck thickness on the 225 Winchester brass was greater than the 30-30 Winchester brass. Kevin apprised me of the situation and advised everything worked fine after the necks had been turned .004-inches.

As with any wildcat case that must be considerably altered, all sorts of tricks are learned during the process. And before long a routine is developed where making the brass is a pleasurable chore, assuming you like this sort of thing. The biggest problem with the Wasp brass was my lack of knowledge about the neck thickness between the 30-30 brass and 225 brass. This was quickly solved by using a Sinclair Case Holder and the Sinclair Driver on a hand drill, allowing the necks to be quickly and nicely turned to the proper dimension. Not only did the brass look much nicer after turning the necks, but the process should also improve the accuracy.

Before I knew it the rifle was back in my possession. Kevin Weaver is an excellent gunsmith; his metal work was top notch, the Boyds stock was nicely inletted and the Krieger barrel had been topped off with a swirl finish. Kevin had squared the bolt face and receiver face, lapped the bolt lugs, and surface ground the recoil lug. The action had been pillar bedded using large aluminum pillars and the barrel free-floated an inch forward of the locking ring. A Score High benchrest follower from Sinclair’s had been installed. The trigger pull was a crisp two and a half pounds, just about right for a varmint rifle. The final touch for this new rifle would be a Sightron Big Sky 6-24X42 scope mounted with Burris Signature rings.

An excellent selection of loads for the 219 Donaldson Wasp can be found in the 7th Edition Hornady Handbook of Cartridge Reloading, including bullets weights from forty-five to sixty grains. Several boxes of the Sierra 52-grain HPBT Match bullets had just joined my bullet shelf and I decided this would be an ideal bullet for the Wasp. Research indicated that IMR-4064 would be the best choice of powder and 28.5 grains would be a good starting point , so as usual I started with a tad less.

This Weaver-built Savage rifle can offer some excellent groups.


To my surprise the primers were somewhat cratered. Then I remembered that the 225 Winchester brass is thicker than 30-30 Winchester brass, and that translates to less volume inside the case (and more pressure). The amount of powder was cut back a bit and in no time the Savage was delivering the expected small groups. At one range session the groups averaged slightly less than a quarter of an inch at a hundred yards… and in typical varmint fashion, these groups were achieved firing from a Harris bipod. As things turned out the combination of Sierra 52-grain match bullets and 27.5 grains IMR-4064 powder allowed this rifle to deliver quarter-inch groups at a hundred yards. Not bad for a cartridge designed in 1933.

(Neither the writer nor the publication accepts any responsibility for the safety of loads mentioned herein in other firearms. They were safe in the firearms mentioned and on the day of their firing. Start low with your loads and work slowly up.)

Glenn Burroughs is a retired computer systems manager with a lifelong love of guns. His main areas of interest are accurate rifles, wildcat cartridges, reloading and bench shooting. He also enjoys an occasional trip out west to the prairie dog country. Glenn was a columnist for Precision Shooting magazine and also wrote articles for Varmint Hunter magazine. He resides in Lynchburg, Virginia.