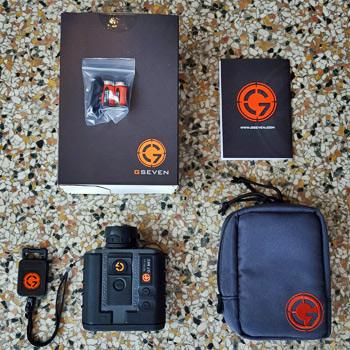 When Len contacted me and asked if I would be interested in reviewing the “improved “ G7 BR2 Rangefinder I jumped at the opportunity. Having used the original G7 BR2 for three hunting seasons and having harvested a couple of dozen deer, antelope and coyotes at ranges to 1200+ yards, the G7 BR2 has proven to be a key component in my long range hunting success. When I first acquired my original G7 BR2, I spent a great deal of time during my first hunting season comparing it to my Terrapin using the Kestrel 3500 and Shooter BC, well proven for my brand of long range hunting which is whitetail, mule deer and antelope in the open rolling foothills of the Bighorns and the open farmlands of Alberta. Both habitats have proven to be very challenging for determining accurate ranging on game. My hunting range is 1000 yards or less and dictated by the energy of my 6.5x284, my medium game hunting rifle. I would also include coyote hunting in the same habitat and will take a good shot beyond 1000 yards.

My initial attraction to the G7 BR2 was the on board ballistic calculator. This feature was very attractive in that it would address “time to shot”, the factor I felt was the greatest obstacle encountered, particularly with skittish, mature whitetails. Using multiple devices for ranging, atmosphere, cosine, and ballistic calculator to determine a ballistic solution not only took time, but would add distraction to the process that could result in a lost shot opportunity.

Comparison testing on hundreds of different ranging scenarios, as well as successful long range kills during that first season gave me the confidence that the G7 BR2 Rangefinder was a viable approach that made the process more efficient. Ballistic solutions out to the stated maximum of 1400 yards matched those using my Terrapin, Kestrel 3500, and Shooter BC exactly.

Another attribute of the G7 BR2 which came as a surprise was the different approach that Gunwerks incorporated in the ranging philosophy of the G7 compared to the other rangefinders. This had to do with how a larger beam size combined with software control of the unit could be quickly mastered to range difficult targets without the need for a “rock steady” rest required with the smaller beam sized rangefinders. Depending on conditions during the hunt, this can take several tries and still record interferences. Perfectly aligning a beam the same size as a whitetails body at 1000 yards is much harder than it looks.

Like many, I was skeptical at first, but once I understood and became proficient in the use of this very different philosophy, I found that I could range small targets with interferences equal to, or many times faster than I could when trying to center a very small beam on a difficult target. This capability is called TruTargeting. It quickly allows the selection of near/far filters to eliminate interference.

I now prefer and have used the G7 BR2 for hunting since that first season. Depending on your particular style of hunting I think it might be a mistake to immediately rule out the G7 BR2 based on beam size. I would stress that the use of the G7 BR2’s TruTargeting modes needs to be understood and used. If the G7 BR2 is used in an aim and shoot fashion as one would with other rangefinders you may be disappointed. Master the G7 BR2 and you will find that it will deliver accurate ranges equivalent to and frequently more efficiently than a smaller beam rangefinder. The G7 BR2 has a unique market position as the only rangefinder that incorporates the ability to program a specific load to produce a ballistic solution.


The new and improved G7 BR2 Rangefinder is available now in the
Long Range Hunting Store.​

Impressions of the Improved G7 BR2 Rangefinder
When I was supplied with the new and improved G7 BR2 I was also contacted by Chris Thomas of G7 Operations and Development. Chris is an expert on the G7 BR2, and he and Gunwerks CEO Aaron Davidson made themselves accessible to answer questions and provide insights into various aspects of the G7 BR2’s capabilities.

It was a pleasant surprise to see that the improved G7 BR2 now comes with a nicely designed grey Cordura case, a major improvement over the original case for practical carry on a belt. Included is a retractable tether that can remain attached to the case or serve as a tether to the wrist or other connection point. With the exception of orange highlights on the control buttons, the improved unit has an identical appearance to the original. The improvements cited in the promotional literature are:


Gunwerks has clearly been paying attention to the market. Following the posts on this and other sites, the new features address requests coming from shooters concerning the G7 BR2. Probably the most asked for feature is the ability for the G7 BR2 to provide an Mrad based drop solution. This is no wonder with the polls on this site indicating that 25-30% of the long range shooters either use or plan on using Mrad scopes. The menu selection on the improved G7 BR2 now includes Mrad. Make this selection and the output gives the drop solution to .1 mil increments. Other selections include MOA, yardage turret, and inches. The ballistic solutions calculated are accurate when compared with my MOA solutions from both my original G7 BR2 and my Terrapin/Kestrel/Shooter BC system.

According to Chris Thomas at Gunwerks, the new and improved ranging algorithms provide simplified menus and faster ranging/computing at longer ranges under certain conditions, mainly shorter targets like antelope at shallow angles to the ground. During my testing of various targets under these conditions, I was able to experience the faster calculating time of the unit.

A recent observation made on this site had to do with the difference in temperature specs between the original and improved units. I asked Chris about this, the original G7 BR2 having an operating temperature spec of 32º F compared to the new unit’s lower designation of 0º F. Chris stated that the old unit and the new unit will both calculate a ballistic solution down to 0º F. The range shown in the original G7 BR2’s specification sheet was referring to the temperature range for optimum performance of the LED screen. I had expected that this was an anomaly because I have used my original G7 BR2 at 0º-15º F for a week in freezing Alberta and had no issues with my drop solutions. The LED worked fine at these temperatures. It was nice to resolve this question.

The new G7 BR2 incorporates a smaller beam size, measuring 1.5x3 Mrad compared to 2x4 Mrad of the original unit, a 25% decrease in size. In addition to the beam size being 25% smaller, the aiming point of the improved G7 BR2 is rectangular in shape rather than the original square shaped aiming points of the original. Unlike the original, the new G7 BR2’s rectangle visually matches the beam coverage area to the size of the rectangle. This is a nice feature that not only provides a smaller aiming point, but also gives an accurate perspective of beam coverage on the target. I found that this makes it easier to acquire smaller targets at longer ranges. This reminds me of the effect of using the smaller aperture on an AR15’s peep sight to improve accuracy at longer ranges.

Compared to the original G7 BR2’s aiming square, it seems easier to get accurate ranges at longer range on deer sized targets with the improved G7 BR2, even in difficult to range settings with interferences present. The new G7 BR2’s beam matching rectangle and smaller beam size extends this ease to 1400 yards or better, aligning nicely with the calculation limit of the G7 BR2. This improvement complements the use of the TruTargeting modes, which are used to quickly achieve accurate ranges when there are interferences. Like the original G7 BR2, the LED intensity of the square can be changed to accommodate ambient light conditions. While the original unit had different styled aiming shapes, the new G7 BR2 uses the beam matching rectangle only.
Next page: New And Improved G7 BR2 Rangefinder Review >