The Mule Creek Outfitting building is located right up against some of the land where they had hunted antelope just a few weeks earlier. From where my car was parked we toyed with my new G7 rangefinder as we watched 2 shooter antelope bucks just 650 yards from where we stood. The building is situated on top of a hill with views of the Wyoming range to the east and the Bridger range to the west. 
Soon we headed out to the trail head where we mounted up and headed up a drainage for about an hour. As we got higher we started to experience the mountainous beauty we would be spending 5 delicious days in.

Then we dropped down into a shady little woods set up with large wall tents and a corral for our steeds. Each tent was equipped with wooden floors and a wood stove. We used the wood stove the first night only as the temperature was mild. 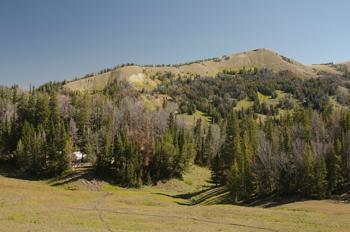 Camp in the trees.


Shawn, the camp cook, made sure we were quite satisfied with the quality and quantity of food that evening and each day we were there. I think I even gained a few ounces! John Berger showed up just after dark that first evening with Mark, the archery elk hunter he was guiding. Mark was so excited to tell the story of his long chess match with a shooter bull. No shot but the close encounter had left Mark with very unsteady legs and an elevated pulse rate. 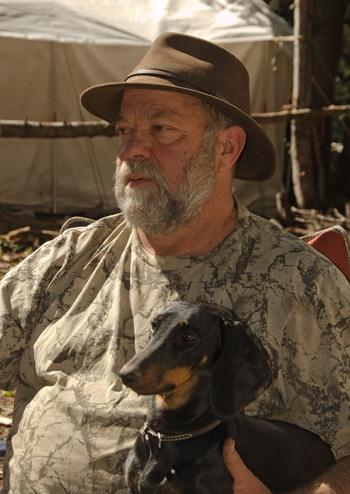 Shawn and our camp dog.

The first morning we left camp as soon as the sure-footed horses and mules could see to walk safely in the dim moon light. We headed for the back side of a nearby mountain and set up. It was a good first chance to work out a hunt routine with our guide, Jacob, and the horses and mules. Tom and I were riding mules. This was my first time on mules. Mules are more comfortable than horses. They are not as broad to sit on and their gait is smoother. I would now choose a mule over a horse any time I have a chance. 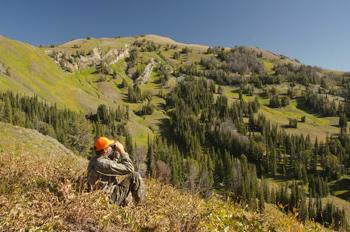 Each day we made it back to camp for lunch and maybe a short snooze before going back out for the late afternoon magic time. On the first afternoon we set up at the base of the same mountain. Tom shot a huge bodied 4X4 mulie just before dark. It had one of the largest bodies I’ve seen on a mule deer and seemed to be an older deer in its declining years of antler growth. A very nice deer!

It was too late to get a pack animal back to retrieve the deer. So the next morning Jacob, Joe and Tom set off to recover it. John Berger was guiding his brother-in-law, Mark, on an archery elk hunt but they escorted me up a different mountain in the dark. When they dropped me off at the peak I was very happy to have this mountain all to myself for a solo morning hunt. I worked on along on foot staying below the crest while glassing below. As the magic early morning hours ended I couldn’t wait to get out my camera and I spent a couple hours taking pictures and wandering further down the trail. Eventually I made my way back to camp.

A large black bear had been seen nearby a few days earlier and Tom decided he would go to town with Joe and buy a bear tag for himself. So that afternoon Jacob Berger took me out for a 2 or 3 hour setup on the side of a nearby mountain. From the spot we chose I could have had shots out to 900 yards in a couple different directions.

Jacob and I were comfortably seated on soft ground below some pine trees that shaded us from the late afternoon’s low sun angle. In the last hour of shooting light we saw a coyote at 500 yards, 2 groups of mule deer does and fawns at 600 yards, a very large black bear at 620 yards and several cow elk with a 300 class bull at 920 yards. All in all, it was quite a display of the varieties of game in the area. I have never seen anything quite like it!
< Prev | Next >